By the time he was 11, Albert Okal appreciated the simple pleasures in life.

Cooking for his stepmother or helping her fix her car.

Trips to the zoo and science center.

Having a roof over his head and a faith in the opportunities ahead of him.

“She has given me a home in this beautiful country and taught me about God,” he wrote of his stepmom, who brought him to St. Charles County from his native Kenya when he was 2. “She helps me with my homework so I can grow up and take care of myself. I like to surprise her with supper when she comes home from work tired.”

Okal had won an essay contest on parenting and as a reward got to take his stepmom to a Cardinals game. Part of his essay appeared in the Post-Dispatch.

Three years ago, at the age of 41, Okal found himself in more difficult circumstances.

He was strapped to a restraint chair in the Wayne County Jail with a bag over his head.

Okal had been transferred to the jail in southern Missouri from the St. Charles County jail, where he was held on a suspicion of driving while intoxicated. He faced a probation violation in Wayne County for a previous DWI charge.

“The Chair” is used by the Wayne County Jail as a “form of discipline” says a civil rights lawsuit filed by Okal in the Eastern District of the U.S. District Court. The lawsuit alleges that at the direction of Wayne County Sheriff Dean Finch, jailers held Okal, who is black, in the restraint chair for five straight days.

“For a period of at least 24 hours all named Defendants allowed a blanket to be placed over Plaintiff’s head during the five days Plaintiff was in The Chair,” the lawsuit alleges.

Jailers didn’t provide Okal medical care, says the lawsuit filed by Poplar Bluff attorney Steve Walsh. He had represented Okal in some traffic matters a few years back. The jailers “forcefully fed food and water down his throat,” and refused to release him to use the restroom, instead causing Okal “to urinate and defecate in his pants and on himself during the five-day period he was in The Chair.”

Walsh, a criminal defense attorney, says he had heard several times over the years about the use of “The Chair” in Wayne County, but nothing like the torture that Okal experienced.

“It took him three days before he could walk on his own,” Walsh said. “That chair is used quite a bit. We don’t want this to happen to anybody else.”

The lawsuit is at least the second of its kind filed in the past year in federal court alleging abusive practices in the use of a restraint chair in rural Missouri. 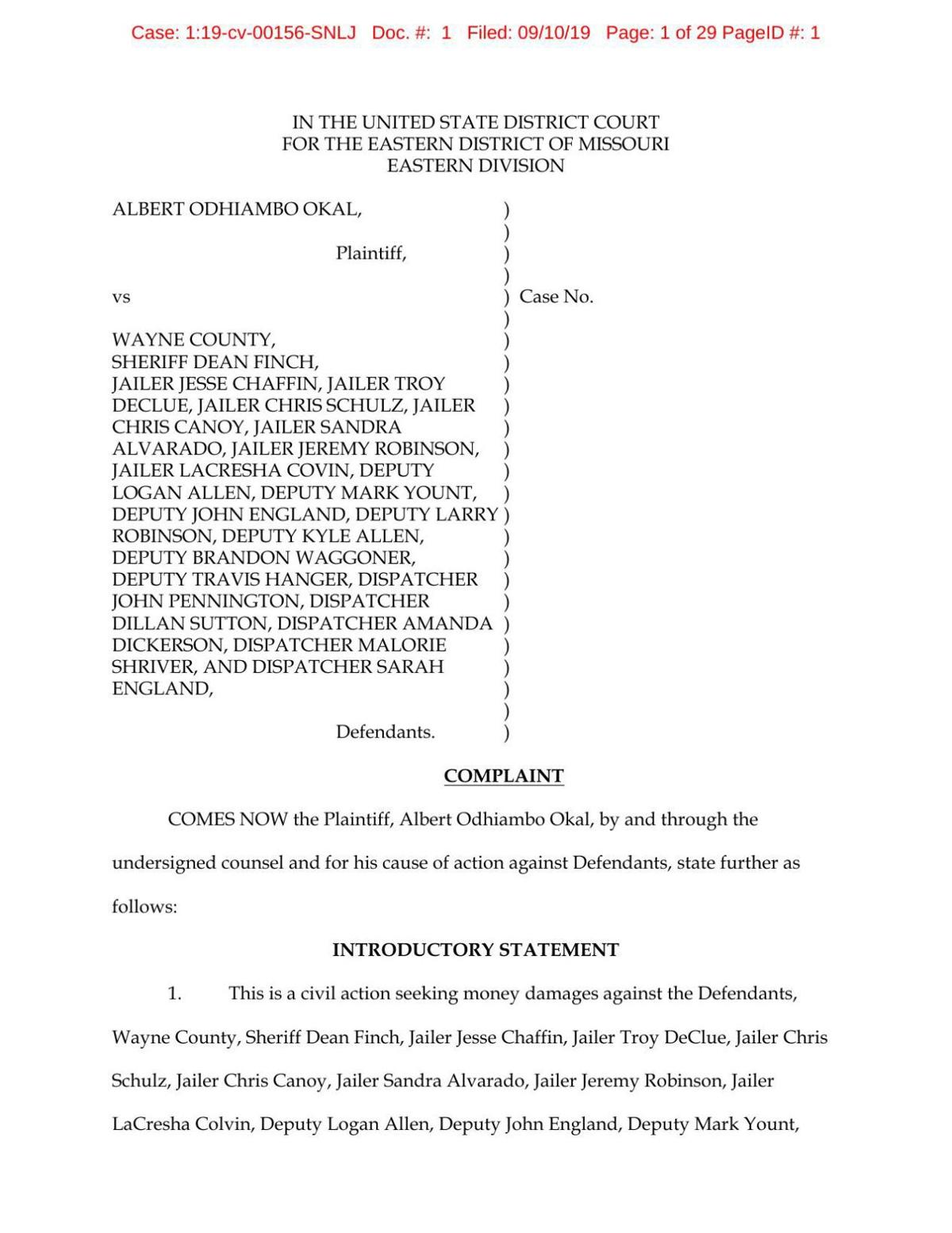 Earlier this year, St. Francois County was sued over the death of Billy Ames, who died in that county’s jail, about an hour south of St. Louis, after being strapped to a restraint chair for about 24 hours.

That lawsuit, filed by Farmington lawyer Vonne Karraker, is making its way through the system, and Ames’ death is being investigated by the state.

Okal didn’t die. He spent four months in the Wayne County Jail, and then spent some time in prison on his underlying DWI charge. He’s a persistent offender, according to the courts. Most of his record consists of traffic offenses, like driving without a license.

In Wayne County, the jail manual calls for anybody who is in “The Chair” to be constantly observed for two hours, then to have a medical assessment, and then for jailers to maintain a log “every fifteen minutes.”

In responding to the lawsuit, Wayne County denies that Okal’s civil rights were violated, and denies that “a medical assessment was necessary.” But the county admits that “a log does not exist.”

In the past couple of decades, restraint-chair deaths have been reported in county jails in several states, with multi-million-dollar settlements paid by taxpayers in many of them. There have been high profile cases in Ohio, Florida, California and Colorado, with many tales of sadistic behavior by jailers using such chairs as modern day torture devices.

It’s no wonder that the Bureau of Justice Statistics reports that deaths in local jails are on the rise.

Luckily for Okal, he was not one of those statistics.

He’s back home in Hazelwood, working as a maintenance technician, and doing his best to get back to enjoying the pleasures of life, like cooking.

He posts photos of the meals he whips up on Facebook — ribs, catfish, fried pork chops, pancakes and hash browns — and feeds to his family.

The simple things. Like life, liberty, and the pursuit of happiness.

These are the things the citizens of Okal’s adopted country hold dear.

Especially if you’re strapped to The Chair in the Wayne County Jail.

Allegations in a Missouri lawsuit shed light on how some jail officials use restraint chairs, which have been linked to dozens of deaths.

Messenger: Strapped to a chair in jail, Billy Ames pleaded for his life. 'They did nothing.'

A federal wrongful death lawsuit is filed against St. Francois County Jail. Three inmates have died there since October.