The chairman of the Missouri Veterans Commission is refusing to release the full contents of an independent investigation into dozens of COVID-19 deaths in the state’s seven veterans’ retirement homes unless the governor’s office provides him a letter that clears him of any personal legal liability.

The chairman, Tim Noonan, a St. Louis businessman, has refused to provide a copy of the full report to the Post-Dispatch as requested under the state open records law. Before denying the newspaper’s request, Noonan had been in communication with both the administration of Gov. Mike Parson and the Office of Administration. Both offices told Noonan that his interpretation of the Sunshine Law was inaccurate.

Noonan has also limited other veterans commission members’ access to the full report. The revelation comes in a letter to Parson from state Sen. Jill Schupp, who is a member of the commission.

“I believe that the MVC, under the direction of the Chairperson, is disregarding the (Sunshine) law,” Schupp wrote in her letter, dated Dec. 28. “The Chair of the Commission has, to the best of my knowledge, unilaterally decided that the detailed version of the report commissioned to investigate the actions or inactions in our Veterans Homes where widespread COVID-19 infection and death have occurred, is a closed record based on attorney-client privilege.”

A 53-page summary of the investigation, conducted by the Armstrong Teasdale law firm, was released Dec. 2. It found a “failure to recognize the outbreak” and the “lack of a comprehensive outbreak plan” as major causes of the COVID-19 outbreak that has killed more than 100 veterans across the state, with particularly large outbreaks in the Mt. Vernon and Cape Girardeau homes. Parson had asked the veterans commission to seek the investigation, which will cost at least $350,000.

The contract called for two documents — a summary and a full report — and stated clearly that both would be subject to the Sunshine Law. In her letter to Parson, Schupp asks the governor’s office to join her in forcing Noonan to release the full 415-page report. 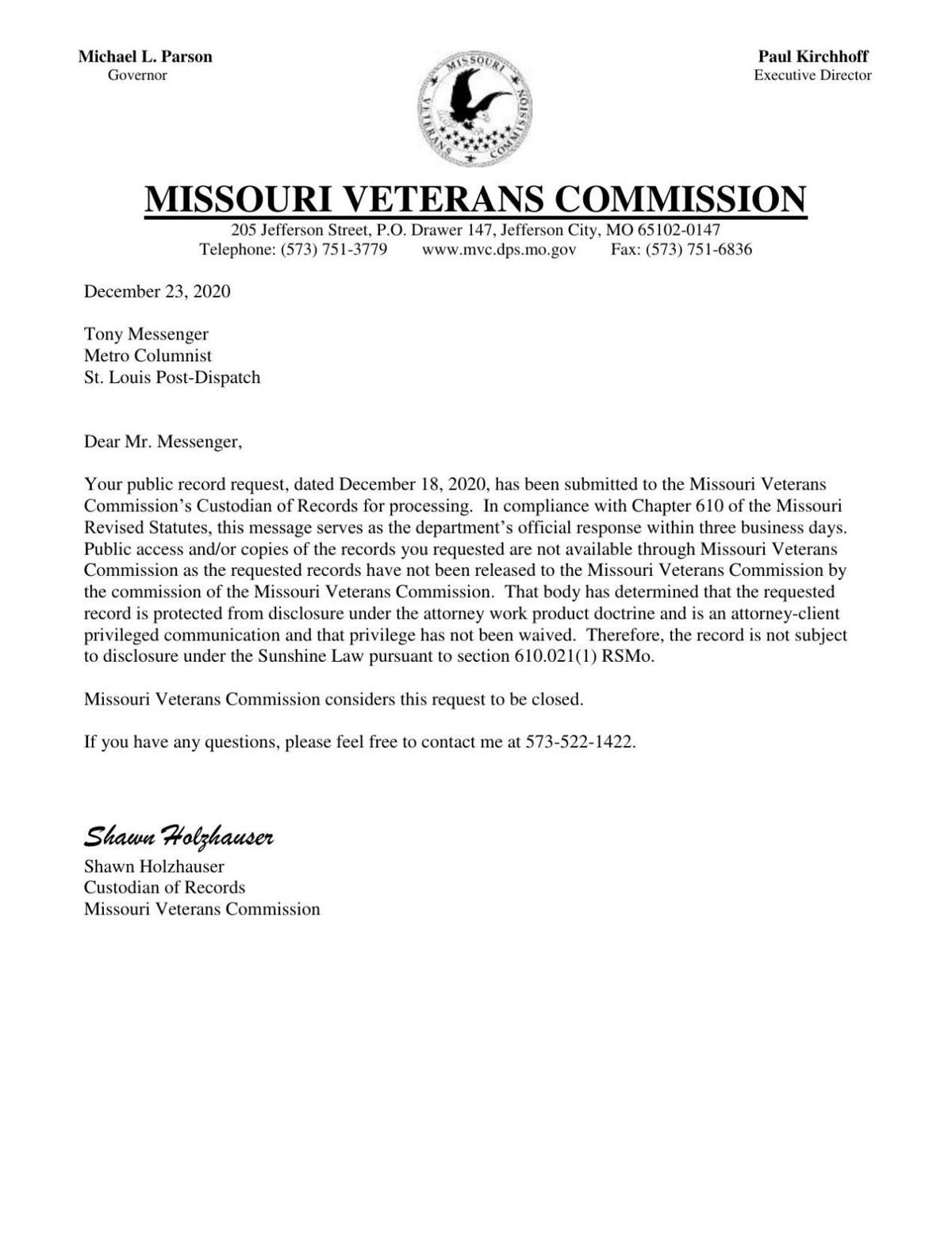 The commission’s custodian of records denied the report to the Post-Dispatch, citing “attorney-client privilege.” Meanwhile, in a series of emails with Sarah Steelman, the head of the Office of Administration, Noonan explained his denial of the report, citing concerns for his personal liability. Schupp was not aware of the Post-Dispatch open records request for the full report until Noonan told her about it. She believes the report is a public record.

“I have personal assets that I do not want targeted by a plaintiff’s lawyer,” Noonan told Steelman in an email on Nov. 20, before the summary of the report had been released publicly. Steelman wanted to be sure both reports had been delivered in fulfillment of the Armstrong Teasdale contract before she paid the bill. Noonan said he would not release the full report until he had an opinion from the attorney general or somebody that answered several questions about potential legal liability. “As the person appointed by the governor and as the day to day engagement manager, I am eager to implement the corrective actions from the report but require the appropriate guidance to explain to my fellow commissioners the next steps on releasing the reports,” Noonan wrote Parson’s chief of staff, Aaron Willard, a couple of days later.

The emails were copied in Schupp’s letter to Parson, which the Post-Dispatch obtained.

In the series of emails with Steelman, and also with the governor’s office, Noonan was told that his interpretation of the Sunshine Law was inaccurate. Those emails were all sent before the veterans commission denied the Post-Dispatch request for the full report on the COVID-19 deaths.

“After talking with OA and our internal counsel, it has come to my attention that the contract with Armstrong Teasdale expressly provides that this was an independent external review, rather than the one of attorney-client representation,” Willard wrote to Noonan.

The governor’s general counsel, Chris Limbaugh, shared a similar opinion with Schupp, which she forwarded to Noonan: “Regardless of what is redacted, the terms of the contract make it clear, at least to me, that this is public record.”

In an interview, Noonan said those opinions are meaningless. “Aaron Willard and Chris Limbaugh don’t have a dog in this fight,” Noonan said. “It is a legal work product.”

However, Noonan said he would release the report in certain circumstances.

“If the governor or the attorney general directs me to release that report, I’m happy to release it,” he said.

From her limited reading of the full report, which she no longer has access to, Schupp suggests there are many details about the veteran deaths, and what led to them, that should be aired publicly. She believes the veterans in the state’s care, and the families of those who have died during the pandemic, deserve a full accounting. On Tuesday afternoon, she publicly called for Noonan to release the full report. In a letter to Schupp, the governor’s office agreed with her call for openness.

The Missouri Veterans Commission is an independent body appointed by the governor. Noonan was appointed to the commission in 2017 by former Gov. Eric Greitens after a previous scandal involving poor care of veterans at the Missouri veterans’ home in north St. Louis. Parson, as lieutenant governor, was involved in bringing that scandal to light. During that controversy, under Noonan’s leadership, the commission also refused to release a full investigation into failed medical care for veterans. The full report was later released by the governor’s office.

“The Chair, by his actions, may be delaying top quality care, thwarting the abilities of the MVC to best serve Veterans, and bringing on challenging lawsuits due to a concern over personal liability that is clouding his judgment of the law,” Schupp wrote in her letter to Parson. “Governor, please help the MVC move forward with improved care for our Veterans by directing the MVC Chair to provide access to the detailed investigative report as required by law. Our Veterans, families and taxpayers deserve no less.”

Noonan said he doesn’t believe there are any “pertinent” details in the 415-page report that are not in the 53-page summary. He says he’s prepared to go to court to defend his right to keep the report secret.

“If the report isn’t legal work product, there’s a remedy for that,” Noonan said. “Go to court.”

Messenger: Release of investigative report is a win for veterans and government transparency

Gov. Mike Parson losing his temper recently in a letter to Speaker of the House Rob Vescovo didn’t surprise me for a few reasons. The Post-Dis…

Rollout of vaccine under Gov. Mike Parson continues to earn criticism for its inequities.

Three years ago he was a "critic" pushing the governor to act. Now the shoe is on a different foot.

Missouri Association of Veterans Organizations puts politics above the welfare of veterans.

Former state Rep. Rick Stream says getting rid of Gen. Larry Kay is a good start, but should only be the beginning.

Governor calls for head of Missouri Veterans Commission to be fired.

From February to October, the office of Lt. Gov. Mike Parson investigated complaints at the state-run facility and validated many of them.

Messenger: Vets home boss gets outflanked by old soldiers who have a story to tell

Messenger: Wandering veteran discharged from home with no plan for shelter

Pristine nature of survey of veterans home raises more questions than it answers.

Messenger: Nurse and doctor stand up for veterans in St. Louis and get shown the door

Former nursing supervisor and medical director complained about care at the St. Louis Veterans Home and lost their jobs.