‘This case is about an innocent man.”

So begins the latest petition seeking to free Lamar Johnson from prison.

As of July 8, the date of the filing of his habeas corpus petition in Cole County Circuit Court, the 47-year-old St. Louisan has spent 9,744 days behind bars for a murder that he says he didn’t commit. He’s hardly alone. The men who say they committed the murder agree Johnson wasn’t there. The key witness in the case, who says he was coerced by a detective, says Johnson didn’t do it. Circuit Attorney Kim Gardner, who says predecessors in her office violated Johnson’s right to a fair trial, says Johnson didn’t do it, and this latest petition wouldn’t have been necessary if the state of Missouri had let Gardner’s motion for a new trial go forward.

For almost two years now, Johnson’s story has been a metaphor for the broken criminal justice system in Missouri. His case, sadly, is a morality play for how injustice has occurred to too many Black men locked up in prison in too many states in America. An overzealous detective or prosecutor finds a man with a record to pin a crime on; they manipulate the photo lineup; find a jailhouse snitch to finger the defendant; ignore claims of innocence or other witness testimony; and then keep exculpatory information from the jury. 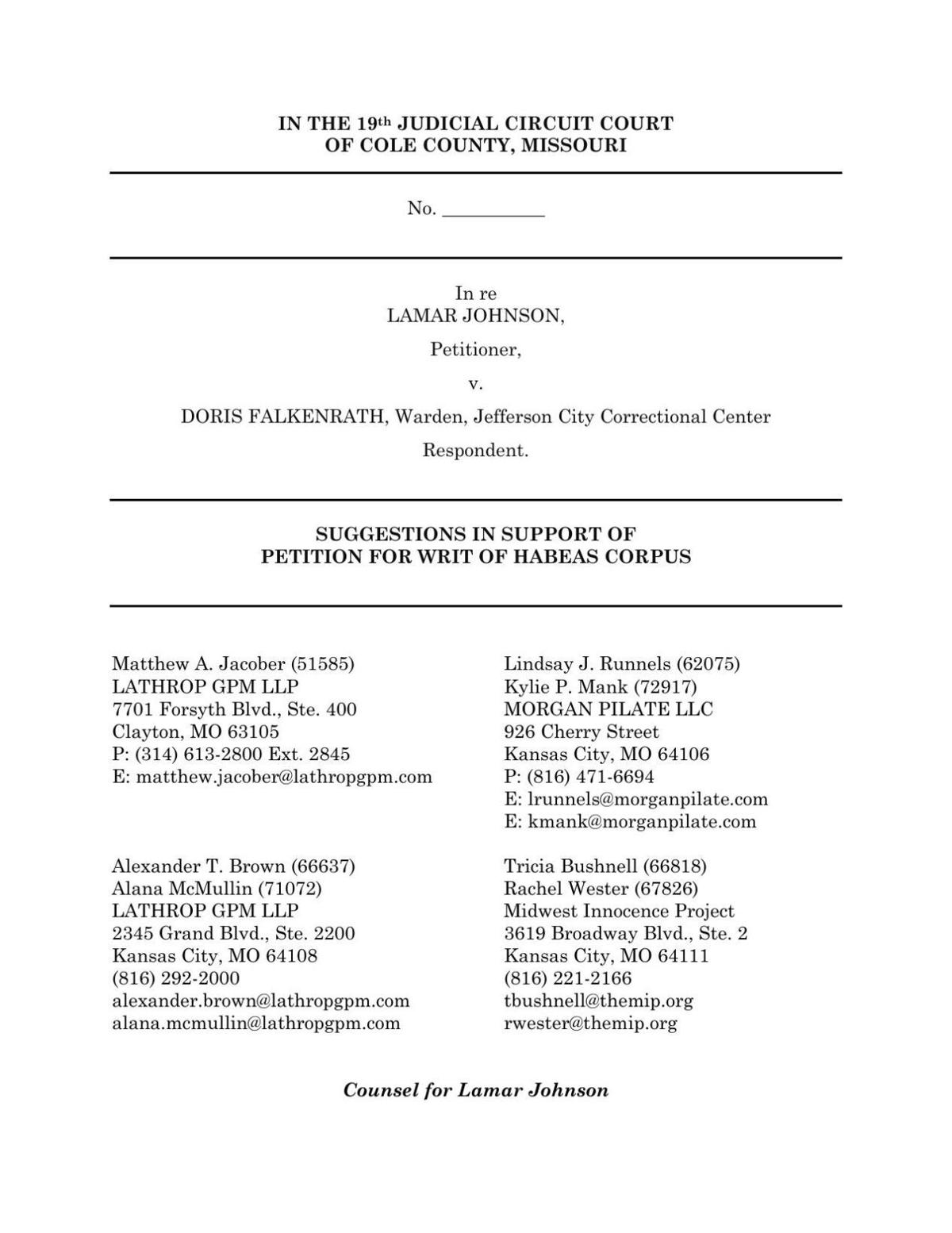 This is the alleged case of Johnson’s innocence laid out in 134-pages of painful and explicit detail before the Cole County Circuit Court, in a case that once again will surely, at some point, be headed to the Missouri Supreme Court.

But the Johnson case doesn’t just criticize the actions of former cops and prosecutors, it’s an indictment of the court system. That’s what makes Johnson potential kryptonite to the seven black-robed justices who will ultimately decide his fate.

To make the case for Johnson to be released, his attorneys (Lindsay Runnels of Morgan Pilate, Matthew Jacober of Lathrop Gage, and Tricia Bushnell of the Midwest Innocence Project), recite a history of justices and injustices involving various innocence cases in Missouri, from Joseph Amrine to Rodney Lincoln to David Robinson and Larry Callanan.

Each of those cases altered or built on the case law that — with the exception of the Lincoln case — bent the arc of justice a little more in the right direction.

It’s that Lincoln ruling that blocks justice in three cases involving men with compelling arguments for innocence who remain in Missouri prisons: Johnson, Christopher Dunn and Kevin Strickland. In the Lincoln case, the Missouri Court of Appeals said that “actual innocence” wasn’t enough to free a person from prison unless he or she were on death row. Now, Dunn in the Missouri Supreme Court, Johnson in Cole County, and Strickland in DeKalb County, are seeking a reversal of that decision.

“Actual innocence is enough,” Johnson’s attorneys write. And, it should be, of course, but for that to be the case, for Johnson, for Dunn and for Strickland, the court will have to admit that the appellate judges got the Lincoln case wrong and that the Missouri Supreme Court has let that injustice stand for too long.

Dwight Warren, the former prosecutor in the Johnson case, is retired but has lots of friends in law enforcement and the courts. He defends his handling of the case. Joe Nickerson, the detective in the case, is still working — in St. Louis County, though some activists are calling for him to be fired. Most of the judges involved in the cases cited to keep Johnson and the others in prison are still on the bench.

It’s difficult for the courts to look inward, at themselves, and those who are entrusted to enforce the law, and rule in judgment against them. But failure to do so would continue the manifest injustice that has Johnson stuck behind bars for a crime that every credible witness and the prosecutor says he did not commit.

“The truth is inescapable: Lamar Johnson did not kill Marcus Boyd and the evidence of his innocence is clear and convincing. His unconstitutional convictions rest on perjured testimony, false evidence, and misconduct committed by those who took an oath to enforce constitutional rights and tell the truth,” Johnson’s attorneys write. “The office that prosecuted him determined nearly two years ago that he is innocent and should be freed. Justice should not be denied a moment longer.”