A federal judge on Tuesday sent a $500 bill to Missouri Attorney General Josh Hawley that included a simple and direct message:

The message is contained in a four-page order issued by Judge Audrey Fleissig of the Eastern District of Missouri in a lawsuit seeking damages in a police brutality case. The case involves the “arrest, detention, prosecution, and acquittal” of St. Louis wedding photographer Scott O’Rourke, who was involved in a May 24, 2012, political protest.

O’Rourke, who is represented by ArchCity Defenders, is seeking damages from the St. Louis Police Department, which was under state control at the time of the arrest. 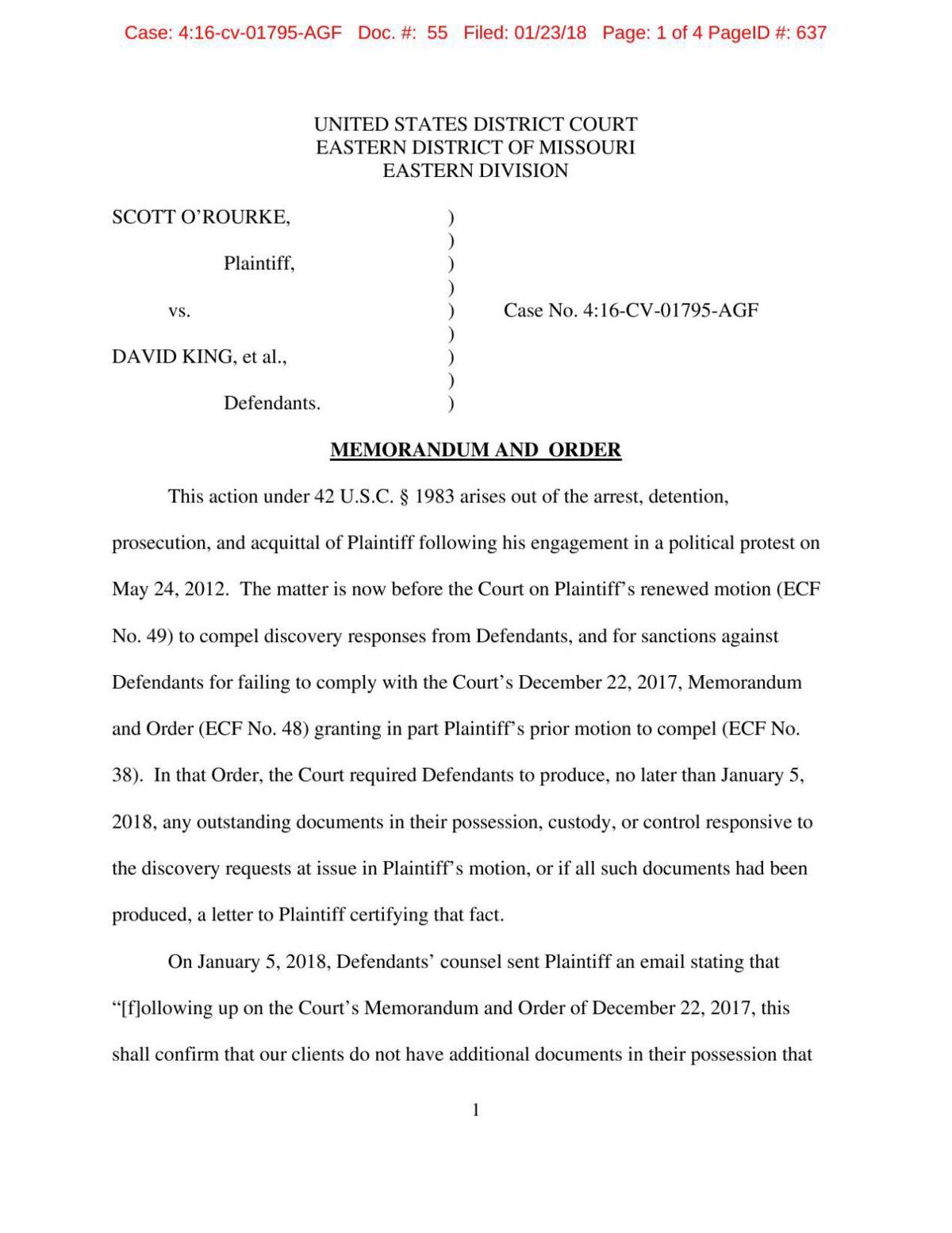 Fleissig sanctioned the attorney general’s office and fined it for “continued and belated” failure to produce documents in the case.

“Defendants have offered no excuse for waiting until after the motion for sanctions was filed to search for additional responsive documents,” the judge wrote.

For Hawley, the slap on the wrist from the federal judge might not seem like a big deal. Except it’s not an isolated event.

On the same day Fleissig was ordering Hawley’s office to get its act together, a state judge was presiding over a hearing with the same goal.

In December, Cole County Circuit Court Judge Jon Beetem issued his own order threatening Hawley with sanctions over the failure to produce documents. That case involves a company, EngagePoint Inc., suing over the state’s alleged failure to fulfill its contract with the company, which was hired to update the state’s Medicaid and food stamp software.

Attorneys for EngagePoint had alleged that Hawley’s office failed to meet deadlines or provide documents through the normal discovery process as required by law. On Dec. 7, Beetem issued new deadlines for production of documents and warned the attorney general’s office that “failure to comply with this schedule, which has been extended a number of times in favor of the state, will result in the imposition of sanctions.”

Hawley is a former law professor who ran for his office as an “outsider” and months into the job announced that he’s running for the Republican nomination for U.S. Senate, hoping to challenge Democratic incumbent Claire McCaskill.

He might want to spend a bit more time focusing on his day job.

In another case where Hawley’s office is struggling to produce documents or schedule depositions, one of his own attorneys outlines at least part of the problem.

“It was my understanding at the time that the volume of documents provided by the client and the nature of those documents were such that our Office lacked sufficient staff to make a proper review for privilege and the protection of personally identifiable information,” wrote attorney Michael D. Quinlan in a brief he filed last October. At the time, Quinlan was Hawley’s chief counsel for the litigation section of the attorney general’s office.

He responded to a motion to compel discovery filed by the attorneys in an employment lawsuit filed by Tina Gallego, a former employee of the Department of Corrections.

“During this time, the Litigation Section of the AGO statewide was short-staffed by approximately one-sixth of our normal compliment attorneys,” Quinlan wrote.

Asked to explain the multiple complaints about the attorney general’s failure to comply with discovery requests, thus costing taxpayers money in extra time, and in one case, a $500 fine, Hawley’s office, in effect, blamed former Attorney General Chris Koster.

“Missing deadlines is never acceptable,” said Loree Anne Paradise, Hawley’s deputy chief of staff. “To change the culture of the office, we began in January (2017) a systematic reorganization of the office’s divisions and review of all personnel. We continue to implement those changes. We are committed to giving taxpayers the service they deserve while living within our means.”

Quinlan, apparently, was part of that plan, having been hired by Hawley last April. He no longer works for the attorney general’s office.

The multiple complaints about Hawley’s inability to get his staff to provide documents come at an interesting time. On Monday, after filing two open records lawsuits accusing St. Louis County and Jefferson County of violating the Sunshine Law, Hawley held a news conference calling for changes to the law. That’s not necessarily a bad idea, says Lathrop Gage attorney Bernie Rhodes. 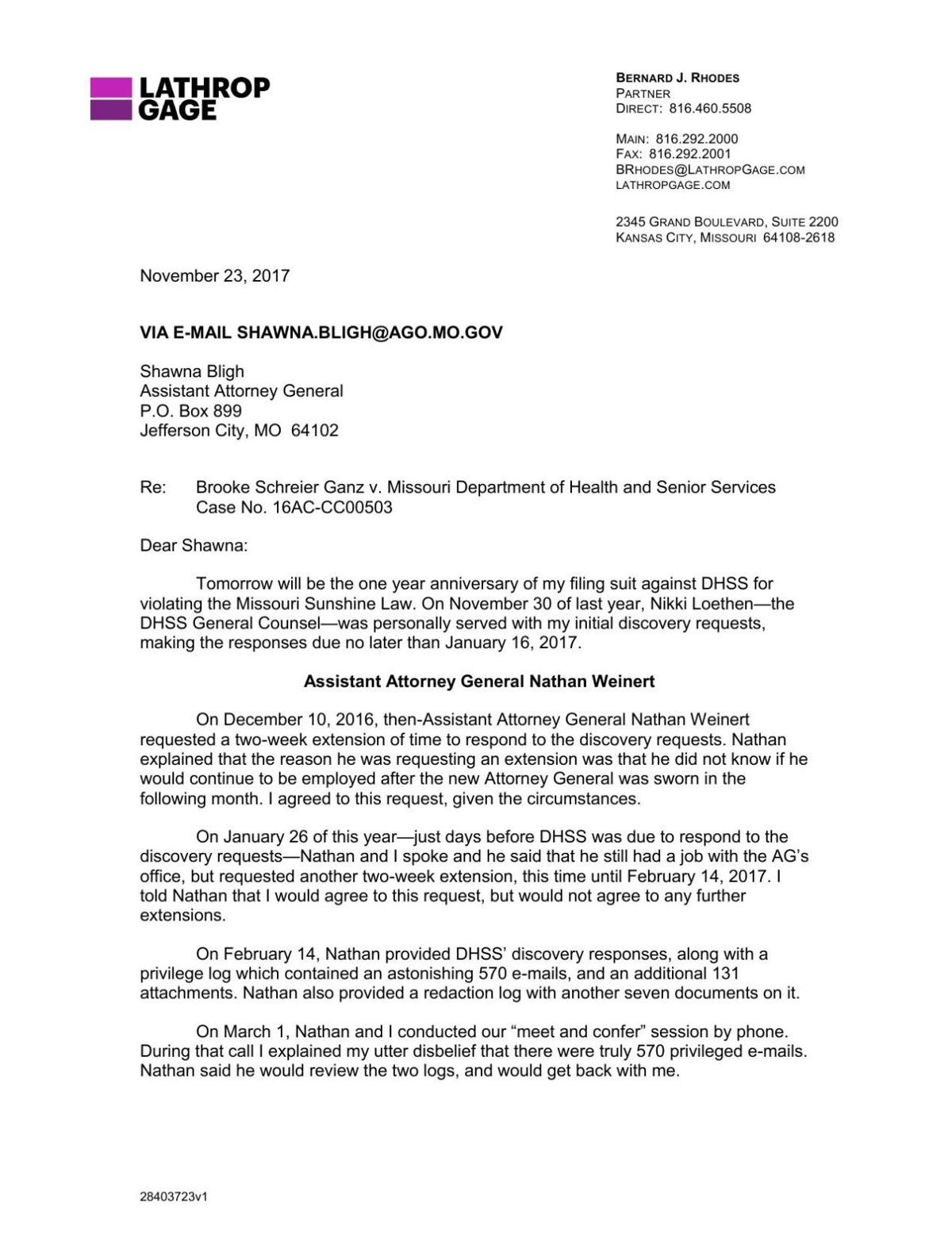 But it would help if Hawley’s office could simply prove it has the ability to follow existing laws. Earlier this month, Rhodes filed his own motion to compel — in a Sunshine Law case, no less — after months of attempts to get the ever-changing roster of attorneys in Hawley’s office to so much as return phone calls or emails.

“It’s a recurring problem,” Rhodes says of Hawley’s inability to produce documents in lawsuits. “It seems to be getting worse under this administration.”

Messenger: Hawley wants transparency in government, except for his own office

Attorney general's office says former head litigator was forced out over sexual harassment but it won't provide the records.