When it comes to Lamar Johnson and his fight for a new trial, there is a story in the numbers.

That’s the number of renowned legal ethics scholars who signed an amicus brief to the Missouri Court of Appeals urging the judges to determine that St. Louis Circuit Attorney Kimberly M. Gardner acted completely within the “best traditions” of the exercise of appropriate prosecutorial power in seeking a new trial for Johnson. 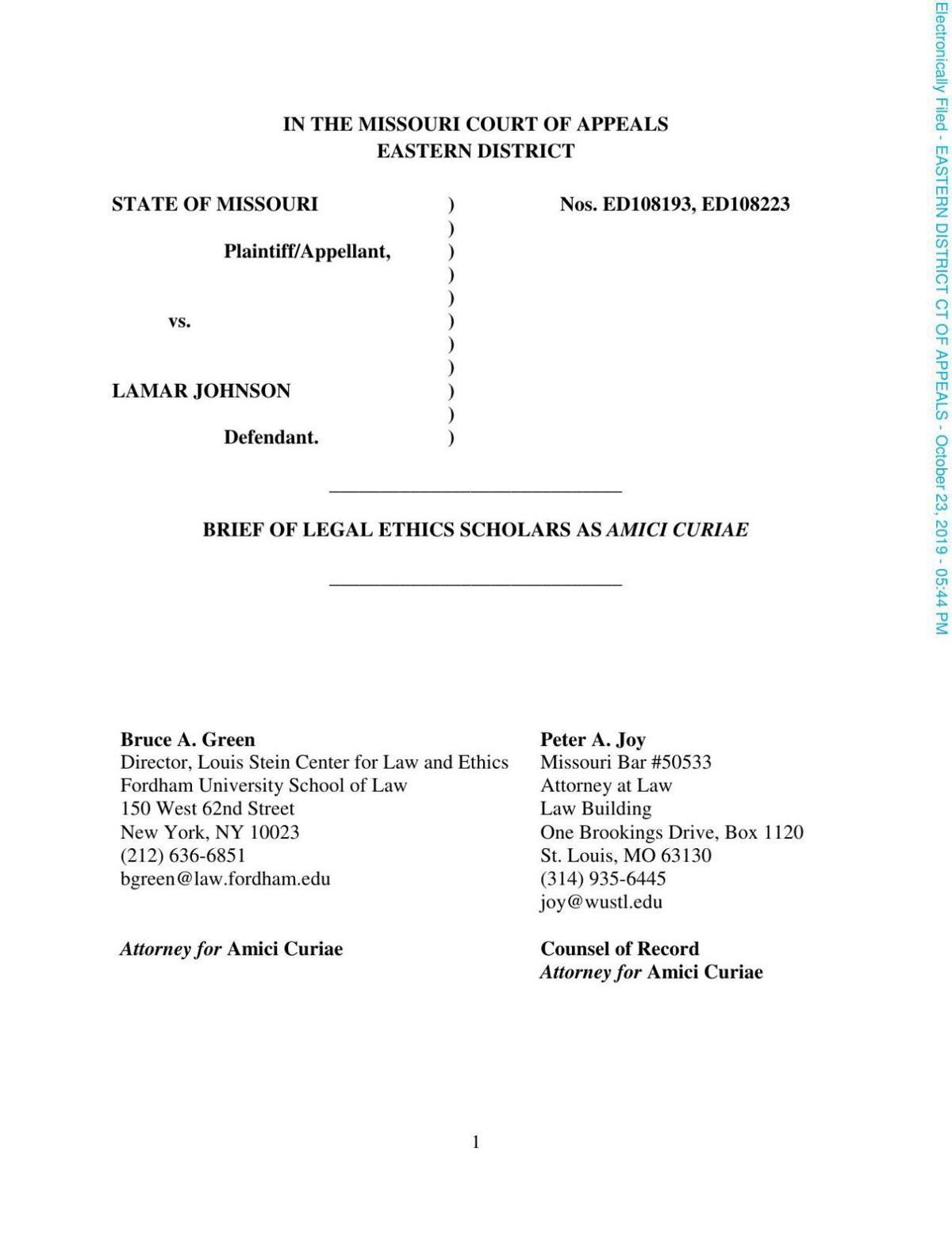 When Gardner’s Conviction Integrity Unit — along with the Midwest Innocence Project — determined that there was significant evidence of perjury and prosecutorial misconduct in Johnson’s 1995 murder conviction and that the past 24 years in prison have been a “manifest injustice,” she filed a motion for a new trial, so that Johnson could, ultimately, be set free.

St. Louis Circuit Judge Elizabeth Hogan punted. She implied Gardner might have a conflict of interest and appointed the attorney general to represent the state. She said she had no authority to set Johnson free even if he was innocent. Hogan didn’t hear the motion.

Now, 106 legal scholars are telling the appeals court that Hogan got it wrong.

There is no conflict, they say, and even if there was one, it doesn’t disqualify Gardner’s office, particularly without a hearing in which evidence would be presented.

The law professors are from Northwestern, Stanford, Duke, Columbia, Fordham, Georgetown, Washington University, St. Louis University, the University of Missouri, and dozens of the top law schools in the country.

Gardner was right to file a motion for a new trial in Johnson’s case, they say, and she, and she alone, should represent the state’s interests.

“Prosecutors have a duty to seek justice, which includes a duty to seek to rectify wrongful convictions,” the legal scholars write. “The Circuit Attorney acted in accordance with this duty when she moved to set aside Johnson’s conviction after she concluded, based on her office’s post-conviction investigation of new evidence in Johnson’s case, that Johnson had been wrongly convicted due to prosecutorial misconduct and was innocent.”

That’s the number of prosecutors from around the country who have joined in a separate amicus brief urging the appeals court to send the case back to St. Louis Circuit Court, so that Johnson can get the hearing he deserves. 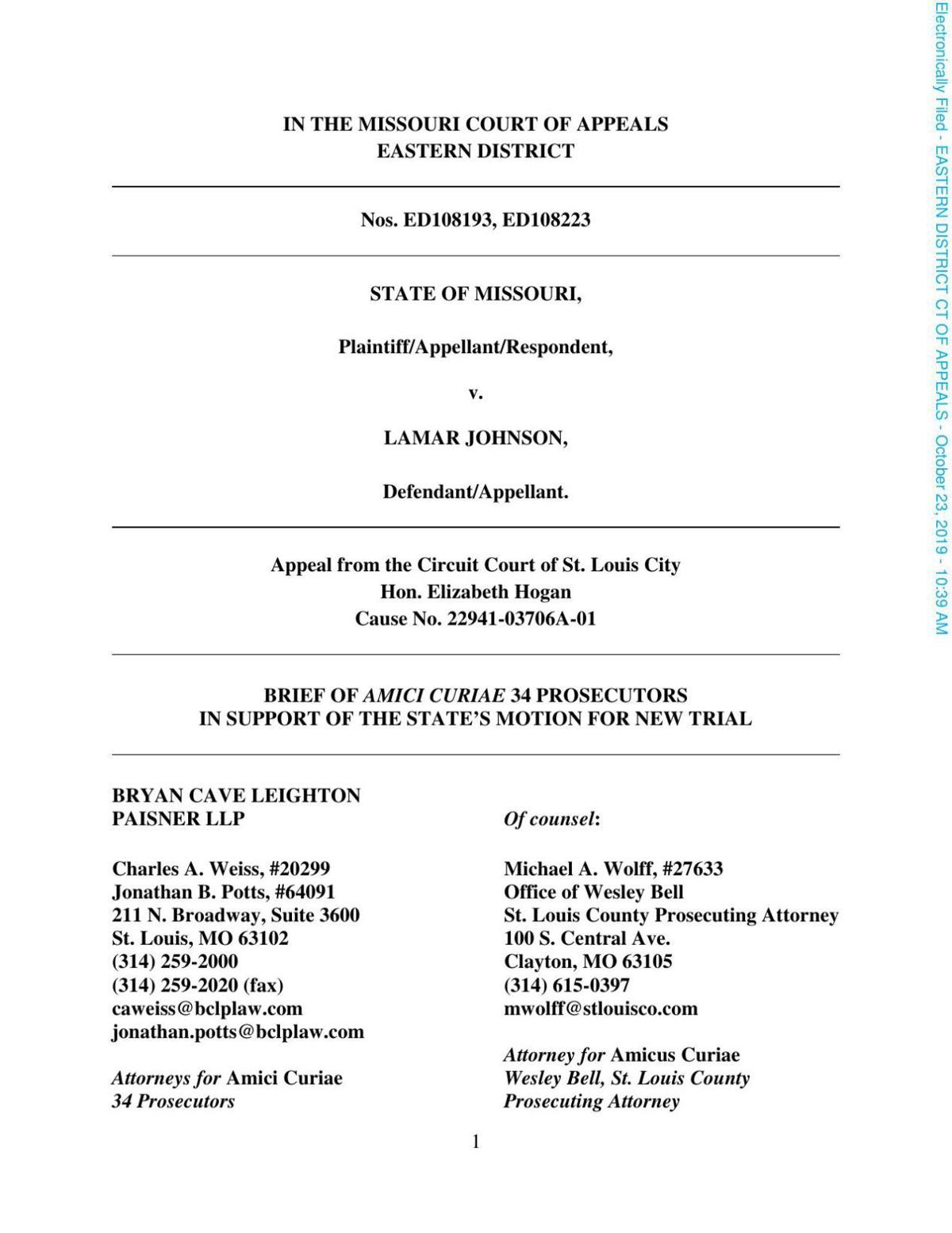 The brief argues, quite simply, that, “Elected prosecutors should not be expected to await or rely on the actions of others to correct legal wrongs; indeed, they are ethically required to proactively address these concerns.” While some of those prosecutors come from states where lawmakers have specifically created laws making it easier for Conviction Integrity Units to work, the lack of such a law in Missouri should not be an obstacle to any prosecutor trying to file a motion for a new trial that might otherwise be considered “untimely,” under Missouri Supreme Court rules, the prosecutors write. That’s because that same court has recognized a “manifest injustice” exception to such rules of timing. “A local prosecutor deserves respect when he or she approaches a trial court and asks that court to correct a legal wrong for the benefit of an innocent person. This candor should be treated as a qualification for office, not as a factor disqualifying a prosecutor from representing the citizens of this State to the full extent of her constitutional duties.”

Another number is nine.

That’s the number of post-conviction legal scholars who signed yet another amicus brief, this one arguing that the St. Louis Circuit Court has not just the ability but also the responsibility to hold a hearing on the new evidence in Johnson’s case. 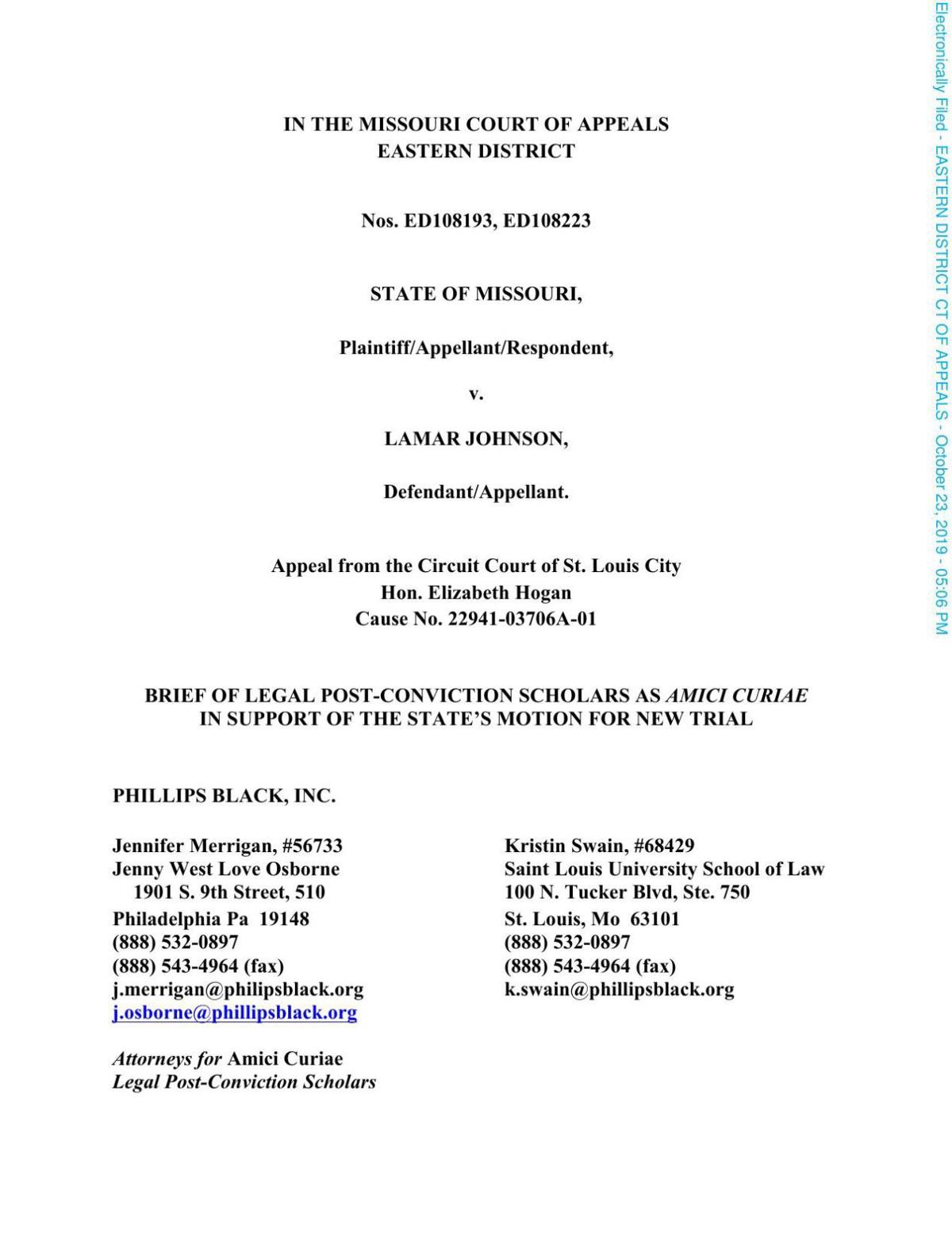 “A system of justice may not elevate form over fairness, where an innocent man is knowingly kept in prison, despite constitutional violations,” the scholars wrote. “The Circuit Court should exercise its equitable authority under Missouri law to review the Circuit Attorney’s motion.”

Then there is the number three.

That’s the number of state and federal courts that have rejected Johnson’s previous motions for a new trial over the years.

The final number is one.

There is one man at the center of this legal dispute that has drawn the attention of some of the top legal minds in the country. One man whose civil rights have been trampled upon; one man stuck in prison in Jefferson City because the system that put him there can’t figure out how to undo its grievous error. As much as some of her detractors want to make this story about Gardner, it’s really not about her. It’s about a man in prison whom the prosecuting attorney says didn’t do the crime.

“If everybody agrees that I’m innocent,” Johnson told Kansas City television station KCTV in a recent interview, “then I don’t understand why it’s so hard to do the right thing.”

The same year that the 1994 federal crime bill passed, Lamar Johnson was charged with murder. He was convicted a year later and has been in prison ever since.