He’s the director of airport compliance for the Federal Aviation Administration.

That means Willis is the man in charge of the application process for a city like St. Louis to consider a privatization of its airport. Lately, Willis has been serving as a mediator of sorts between St. Louis elected officials who have been communicating to the public and each other through a series of letters and emails to Willis.

The first one came from Board of Aldermen President Lewis Reed.

Dated March 17, the letter from Reed had an overarching theme:

There’s a new sheriff in town. Or, at least, there will be if Reed’s allies can pull a fast one on St. Louis voters. 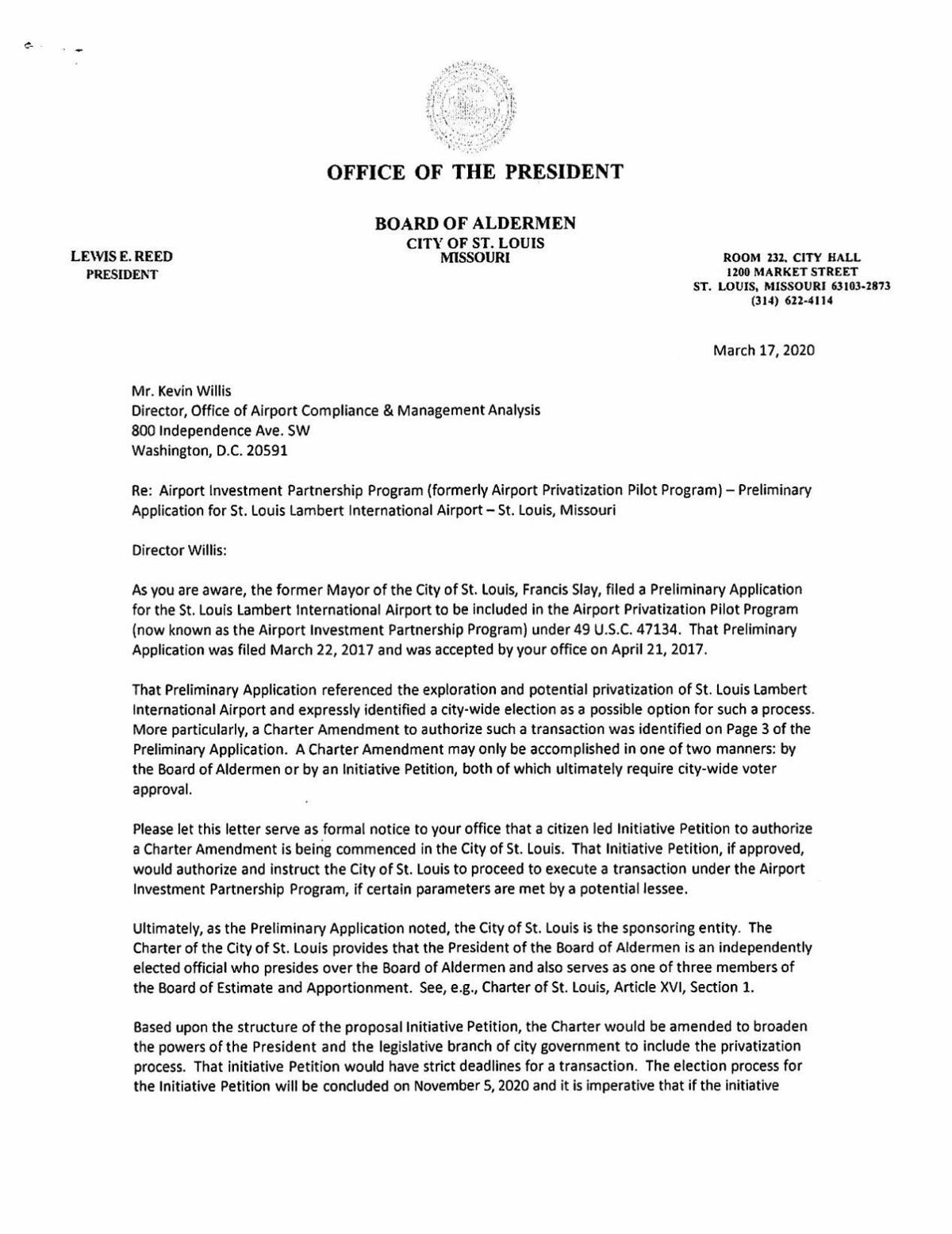 “Please let this letter serve as formal notice to your office that a citizen led initiative Petition to authorize a Charter Amendment is being commenced in the City of St. Louis. That initiative Petition, if approved, would authorize and instruct the City of St. Louis to proceed to execute a transaction under the Airport Investment Partnership Program, if certain parameters are met by a potential lessee,” Reed wrote.

The date of Reed’s letter is interesting. It was more than two months before the new privatization effort (which is really just a new version of the old effort), went public with the details of its initiative petition.

Back to the letter:

Now for the really good part:

Reed, of course, didn’t file the application to the FAA to let the city explore the privatization of St. Louis Lambert International Airport. Former Mayor Francis Slay did, and then it was re-filed by Mayor Lyda Krewson. Only the mayor can revoke that which she filed.

And the mayor did that, in a second letter to Willis, on May 28.

That was around the same time a group of front men — Al Bond, executive-secretary-treasurer of the St. Louis-Kansas City Carpenters Regional Council, and Adolphus Pruitt, president of the city branch of the NAACP — announced the petition drive that Reed had already told Willis about, and that was being primarily funded by lobbyist Travis Brown’s company, Pelopidas.

Of course, when asked about the petition drive in May, Reed’s spokesperson demurred, saying he hadn’t taken a position.

The letter to Willis suggests otherwise. It describes the Second Coming of Better Together, when the group of consultants gathered by wealthy campaign donor Rex Sinquefield suggested a merger of the city and county, with then County Executive Steve Stenger being appointed to an all-powerful position to determine the future of the new mega city.

Stenger was sentenced to federal prison, in part the result of his insatiable desire to raise campaign funds, several hundred thousand of which were passed to Stenger or his allies by Sinquefield through intermediaries, including, of course, the carpenters’ union.

Now the gang is back together. Reed is their new figurehead, rushing a bill through the Board of Aldermen that mimics the petition initiative, just in case the initiative runs into legal problems. Both efforts claim to be about spending money rebuilding the city’s northside, primarily in African American neighborhoods. Neither Reed’s bill nor the petition actually has language that guarantees that happens, though they create new charter rules to bypass existing government checks and balances.

Because of their rushed deadlines, both the initiative and Reed’s bill do guarantee this: If a lease is signed by July 2021, Sinquefield will get about $44 million, which he fronted to the consultants who worked on the last privatization process stopped by Krewson amid cries of corruption.

Willis gave Spencer the details, and then a little bit of advice for the city’s elected officials:

“On a personal note,” Willis wrote back to Spencer, “we need our local elected officials to communicate with each other — the FAA should not be an intermediary.”

Airport privatization supporters say they are working to help the north side of St. Louis. But key funder works to keep health care from those very residents.

Messenger: On the airport, transit and regionalization: Does East-West Gateway hold the key?

Steve Ehlmann wants a regional discussion about the airport. He's the right person to lead it.

Among the conflicts from disputed bidder tied to former chief of staff is one connected to deputy mayor.