Three years ago the Missouri Court of Appeals used a playground metaphor to identify a fundamental problem of unfairness that underlies the judiciary all across the country.

The three appeals judges from the Eastern District were deciding a case involving a disabled grandmother named Linda Parrott. St. Francois County Judge Sandra Martinez had sent Parrott to prison for allegedly violating her probation by not paying court costs, including a bill for the time she was in jail.

The appeals court set Parrott free. The judges wiped out her remaining debt. And they sent a message that continues to resonate in courthouses across the state and the nation.

“It appears (Parrott) could be placed on a never ending merry-go-round of having her probation revoked and being placed on a new term of probation until these amounts are paid. Of course, that is not permitted by Missouri law,” wrote Judge Sherri Sullivan in an opinion signed by two other judges. “In this case we are left with a system in which all Missouri taxpayers have to pay for the salaries of judges, clerks, prosecutors, public defenders, and probation officers to collect money from a grandmother on disability supporting her grandchildren in order to operate the St. Francois County jail. The amount of resources devoted to this task is astonishing.”

The ruling would serve as a precursor to the one issued by the Missouri Supreme Court earlier this year that ended the debtors prison scheme of sending people to jail because they couldn’t afford their bill for a previous stay in jail.

Now, a new national report gets to the crux of the argument made in Sullivan’s 2016 opinion.

Not only is the system of justice practiced in most states — in which indigent defendants pay court costs that exacerbate their poverty — unfair and in some cases unconstitutional, it’s also an ineffective way to raise revenue.

That’s what researchers at the Brennan Center for Justice found in a groundbreaking study of the collection of court costs and fees in Texas, Florida and New Mexico. The study finds that in some cases, counties spend more money to collect court costs than the revenue brought in. All three states spend significantly more money collecting court costs and fees — mostly from people living in poverty — than the states spend on other forms of traditional tax collection. 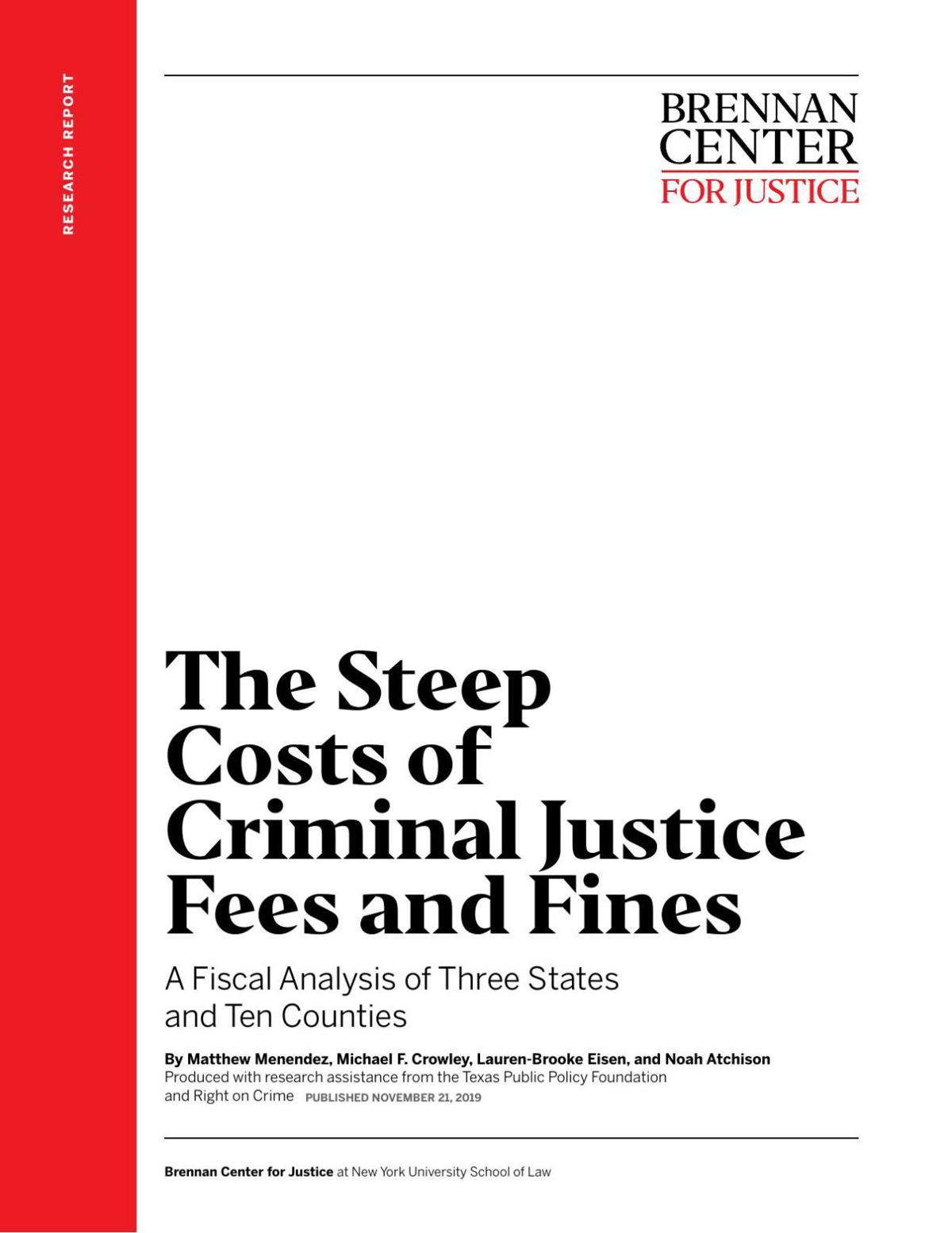 That’s money that can’t be spent on public safety or other important government services.

“The Texas and New Mexico counties studied here effectively spend more than 41 cents of every dollar of revenue they raise from fees and fines on in-court hearings and jail costs alone,” the researchers found. “That’s 121 times what the Internal Revenue Service spends to collect taxes, and many times what the states themselves spend to collect taxes. One New Mexico county spends at least $1.17 to collect every dollar of revenue it raises through fees and fines, meaning that it loses money through this system.”

The study was produced in conjunction with the Texas Public Policy Foundation, a conservative think tank that studies criminal justice reform issues.

The solution to the problem?

Get off the merry-go-round, the Brennan Center says.

Among the report’s key recommendations:

• States, counties and municipalities should eliminate court fees as a method of funding either the courts or other government services.

• Fines that are imposed as punishment should be assessed on a sliding scale based on a person’s ability to pay.

• Judges should be mandated to hold ability-to-pay hearings and should stop the practice of jailing defendants for an inability to pay.

The target of this report is less the judges like the one in St. Francois County who in 2016 put a disabled grandmother in prison, but rather the state lawmakers who pass the laws that allow court costs to be used as a backdoor tax.

Those taxes, says Lauren-Brooke Eisen, one of the authors of the Brennan Center report, are not efficient and take away from other government services.

“We wanted to prove to policymakers and the general public that there is a real cost to trying to collect all these court fines and fees,” Eisen says. “Too many of the people who are paying these fees are ending up in jail.”

The good news, Eisen says, is that lawmakers are getting the message.

“Put concretely and in dollar terms, almost every cent spent on fee and fine collection is wasted as compared to collecting tax revenue,” the report found. “This is a fundamentally inefficient way to collect revenue to support courts and other criminal justice agencies, and it does not make fiscal or economic sense.”

Court frees man who was jailed for violating probation because he couldn't pay his costs.

Tony Messenger has written about Missouri cases where people were charged for their time in jail or on probation, then owe more money than the…