George Richey’s tangle with the law began like so many others in Missouri.

He did his time.

Richey, whose story was featured last month in the Columbia Missourian, was represented by a public defender. He was indigent. Broke. Poor.

Such is the case for all of Matthew Mueller’s clients. Mueller is the senior bond litigation counsel for the Missouri State Public Defender’s Office. Over the past couple of years, he has been filing appeals in cases like Richey’s. After Richey couldn’t afford to pay his jail bill, Rellihan scheduled a series of payment review hearings, forcing Richey to come back to court and make a payment or explain why he couldn’t. When he missed a hearing he got tossed in jail again, and got a new bill for more than $2,200. The judge, like so many others in Missouri, was treating the jail bill like a fine or a court cost.

Mueller argues it is neither of those things.

The American Civil Liberties Union has filed amicus briefs in Mueller’s appeals cases, arguing that the practice creates unconstitutional debtors prisons, putting hundreds, if not thousands of Missourians behind bars simply because they can’t afford to pay.

Soon, the Missouri Supreme Court will decide if Mueller and the ACLU are right.

In December, the court decided to fast track Richey’s case, bypassing the Court of Appeals, which had ruled in a similar case involving a Lafayette County man that the practice of charging board bills and then using the criminal courts to try to collect them is unlawful.

This week, Mueller and the ACLU gained a powerful ally.

On Monday, in his first major legal act as Missouri Attorney General Eric Schmitt filed an amicus brief in Richey’s case, arguing that the practice that is common in most rural counties in the state “is unauthorized by law and must end.”

In the amicus brief, Schmitt references the series of columns I’ve written in the past year on this debtors prison scheme. He writes that “such cases reflect excessively harsh attempts to extract jail debt from inmates of limited means, and that taxing jail debt as court costs in such cases is ultimately self-defeating as a policy matter.” 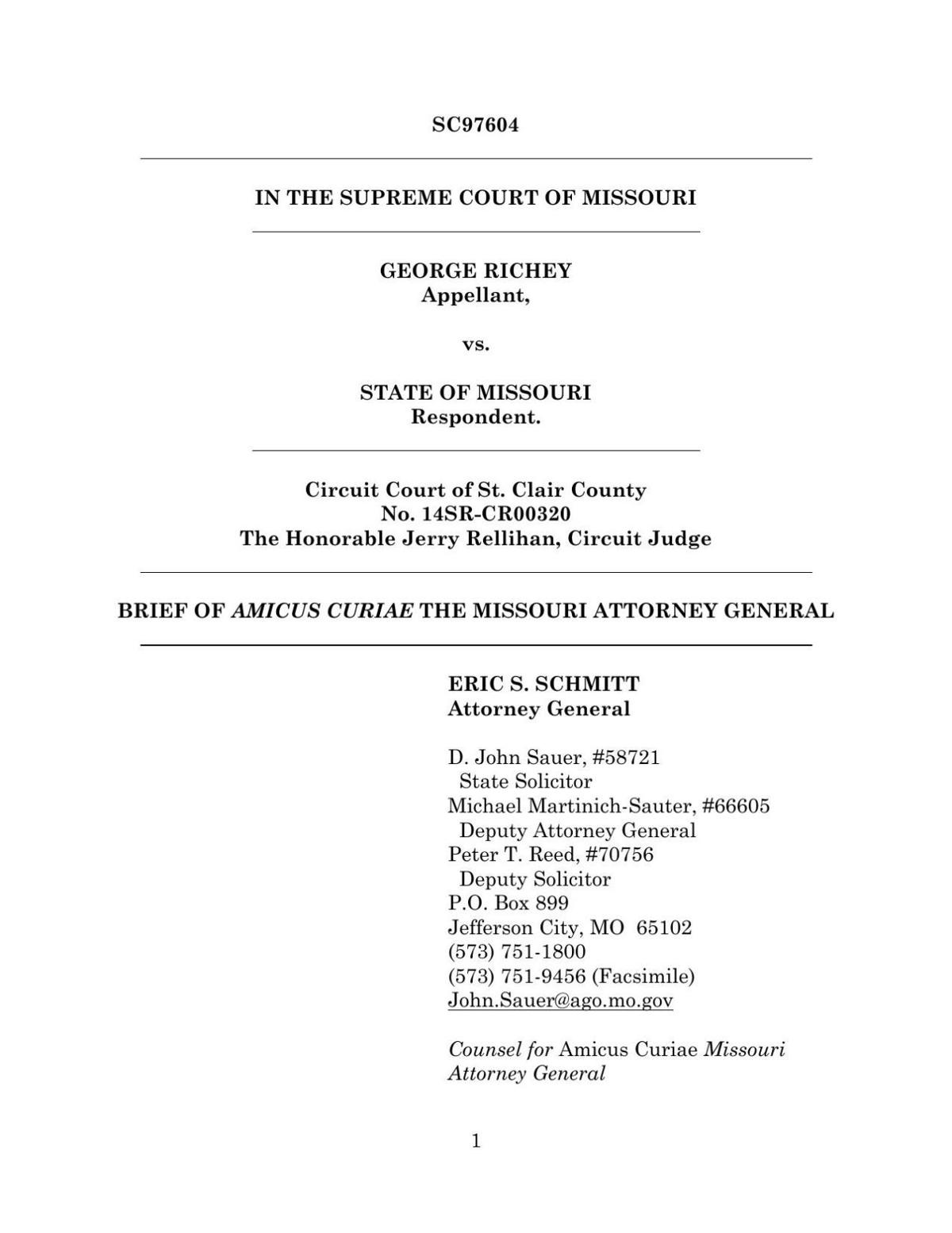 For Schmitt, a Republican, this is not new ground.

In 2015 as a state senator from Glendale, Schmitt sponsored Senate Bill 5, which reined in similar abusive practices in municipal courts, primarily in St. Louis County. That law, a response to the unrest in Ferguson following the 2014 killing of Michael Brown, limited the amount of yearly revenue cities can capture from traffic infractions to 20 percent of a municipal budget, and it stopped the practice of threatening jail time to those who fell behind on their bills.

For decades, it had not been uncommon for poor, black residents of St. Louis County to spend days or weeks in jail simply because they couldn’t afford to pay for tickets. Their inability to pay led to more warrants and more jail time.

At the time, Schmitt referred to the practice as “taxation by citation” and he accused cities of using poor people as “ATMs” shaking them down for cash.

Now, as he joins with the public defender’s office to try to stop a similar practice from taking place in rural associate circuit courts all over the state — affecting mostly poor, white people — he’s using similar language.

“Courts should not be using the threat of jail time to generate funds for bloated big government budgets when other means of collection exist,” Schmitt said in a news release after filing his amicus brief. “De facto debtors prisons have no place in Missouri, and I am proud to stand up against a system that seeks to treat its poorer citizens as ATMs.”

With at least three state lawmakers — state Reps. Justin Hill, R-Lake Saint Louis, Bruce DeGroot, R-Chesterfield, and Mark Ellebracht, D-Liberty — sponsoring or co-sponsoring legislation on the debtors prison issue, that means that elements of all three branches of Missouri’s government are now on the front lines of a civil rights battle that could have repercussions for a generation of folks stuck in poverty.

They are people like Richey, or John Wright of Higginsville, or Brooke Bergen of Salem, or Victoria Branson of Farmington. They are people who have paid their debt to society, but can’t escape the long arm of the law simply because they can’t afford to pay government officials enough money to leave them alone.

“No statute authorizes this practice,” Schmitt wrote in his amicus brief, “and it lends itself to abuses that threaten the constitutional rights of Missouri citizens … It does little good, and potentially much harm, to threaten indigent persons with more jail time and debt when they are unable to pay.”

Tony Messenger has written about Missouri cases where people were charged for their time in jail or on probation, then owe more money than their fines or court costs.

The Pulitzer Prize board considered these columns when it decided to award the prize for commentary to metro columnist Tony Messenger.

In a twist of irony, one judge no longer calls them “payment review hearings.” Instead, he’s even more direct. Now they are called “debt colle…

“The jail is emptying out. People that do come in are able to bond out quickly. None of the girls here are being held for financial reasons. T…

Who holds the key to the jailhouse doors in Missouri's debtors' prisons?

In a case of civil contempt — such as when a judge jails a reporter for not revealing a source, or an attorney for failing to follow an order …

Even with the state’s top court making progress in eradicating the practice of putting people in jail because they can’t afford to be in jail,…

“There are a pile of cases where people owe us money,” the judge told the defendant, a painter, who said he was having a hard time finding wor…

No longer, the court said in one voice, can judges in Missouri threaten indigent defendants with jail time for their inability to be able to a…

Weiss wants the Legislature to make it illegal for counties to charge defendants for their time behind bars.

“How can they cancel a court date then issue a warrant without even telling you the new court date?” Sharp wonders.

"He sat in jail because he was poor," public defender Matthew Mueller said of his client.

In Missouri, the road to debtors' prison starts with cash bail

The two defendants are Exhibits A and B of why Missouri has become the front line in a national war on poverty and the courts.

She knows what she did was wrong. She knows she should have been punished.

“It's been a hard road,” she told me recently. “Really hard.”

Missouri Gov. Mike Parson wants to close a prison. It's a good start.

For decades, Missouri’s corrections budget has been rising. So has its prison population, with a “tough on crime” philosophy filling prisons w…

“We’re hamstringing the very people who we want to go out and get a job,” Lummus says. “It’s self-defeating.”

Defendants getting some help in battles against Missouri debtors' prisons

A year-end update on some of the cases Tony Messenger wrote about during 2018.

The primary difference between the poor people who have been “terrorized” in Edmundson or Jennings or Ferguson, compared with those in Salem a…

Some counties in Missouri don't charge board bills. Those include the most urban counties in the state: both the city and county of St. Louis,…

I did my time and then some. This is how they get people. They keep them on probation and then if they don't pay their board bill they violate…

St. Louis woman had a bad break up in 2006. Camden County still keeps putting her in jail because of it.

By 2009, Rapp was behind in her payments and the court revoked her probation. She did a couple of days in jail and her cash bond of $400 was a…

Every week in Missouri, a judge somewhere holds a crowded docket to collect room and board from people who were recently in jail. The judges c…

“I don’t see why he has to keep going to court every month,” she says. Sharon uses her Social Security income to try to keep him out of jail. …

Because Precious Jones was late to jail, prosecutor and judge seek to add to her sentence.

The Missouri Supreme Court and Missouri Legislature should revisit their 2015 and 2016 efforts to reform courts. More work is necessary.

Other than now being required to meet federal standards for that drug testing, private probation companies face nearly no oversight in Missour…

“I messed up on probation,” he says. “It was my fault.” Still, he doesn’t think it makes sense that he’s still hauled to court once a month wi…

She was late to a hearing, so a Dent County judge tossed her in jail. Then she got the bill.

The domestic violence victim, Gaddis says, wouldn’t make a report to police because she feared going to jail herself and losing her child.

“They make you jump through hoops,” Bote says, “and then they keep moving the hoops higher.”

From Hamilton to homeless; another debtors' prison tale from rural Missouri

William Everts stole from a church. Almost immediately, he knew it was a bad idea.

Pritchett first called me last year, after I wrote about a St. Francois County woman who was sent to prison for failing to pay court costs. He…

Rob Hopple had been in jail since May after falling behind on payments on an ankle bracelet. Court dates kept coming and going, with the prose…

Jailed for being poor is a Missouri epidemic

“The practical reality is that people are being arrested for being poor,” Mueller says. “And there’s nothing they can do about it. They just s…

In St. Francois County, judge and prosecutor treat jail like an ATM

At least twice in recent years, the Missouri Supreme Court has overturned harsh sentences issued by a judge after she sent people to prison so…

Branson, in early 2018, was in Desloge, Mo., now, living with her 15-year-old son, checking in with her parole officer, hoping never to go bac…

Officially, Victoria Branson’s probation was revoked because she never paid the state the past due support and the court costs, which rang up …

Messenger: Angry Missouri judge detains grandparents, drug tests them because of a 'look'

Texas County judge once double-dipped as state employee, taking state money while working on a campaign.

Republican Eric Schmitt says Missouri counties do not have the authority to classify jail debts as court costs or fines.