I have written before that, like Clint Eastwood the movie producer, I like my characters flawed. Think of Eastwood movies such as "A Perfect World" or "Mystic River" or "Gran Torino." The protagonists often have a bad streak, and the antagonists have some hidden streak of goodness. There is a push and pull that leaves viewers struggling with the gray area of life.

So it is with Blair Clevenger and, indeed, most of the people I write about who end up in the criminal justice system. Clevenger battles addiction. She used drugs and got caught. More than once. She did some jail time and ended up on probation. Clevenger was trying to turn her life around and was enrolled in two different sobriety programs when she smoked some pot while dealing with morning sickness. She’s pregnant.

I first wrote about Clevenger last month, when Saline County Circuit Court Judge Dennis Rolf revoked her probation and sent her to state prison, specifically saying that he was trying to protect her unborn child. Rolf had ended up on my radar screen because half of the commutations issued by Gov. Mike Parson since April 2020 came from his two counties — Saline and Lafayette. All were drug cases, and four of them were harsh sentences issued by Rolf.

The head public defender in Saline County, Matt Palmer, filed a writ seeking Clevenger’s release. Palmer argued, among other things, that Rolf was wrong to treat Clevenger different than other, non-pregnant defendants and, even so, was making things worse for her unborn child by forcing him or her to be born in prison.

Last week, the Missouri Court of Appeals, in a 2-1 decision, denied Palmer’s writ. Clevenger will stay in prison. It’s a tragic result to a situation with no good answers.

The best answers, I think, were laid out in an amicus brief filed in the case by the American Civil Liberties Union and the National Advocates for Pregnant Women. Besides the issue of Clevenger’s pregnancy, the brief focuses on a two-part test Missouri judges are supposed to follow in probation cases, determining first whether there is a violation and, second, whether there are good alternatives to incarceration.

It's this second step, the ACLU argues, that Rolf didn’t properly consider. There is no doubt Clevenger violated her probation, perhaps multiple times. But what’s the best option for Clevenger, for the state, for the citizens of Missouri?

“Judge Rolf did not weigh the risks of incarceration for three years — which will result in Clevenger having her child while incarcerated — against the benefits of available community resources,” the ACLU wrote in its brief.

The underlying theme of the brief has a lot in common with an ongoing dispute in federal court in Missouri involving the state’s parole system. A federal judge has determined that the state Department of Corrections is violating the due process rights of thousands of Missouri defendants in skipping steps while sending them back to prison on parole violations. 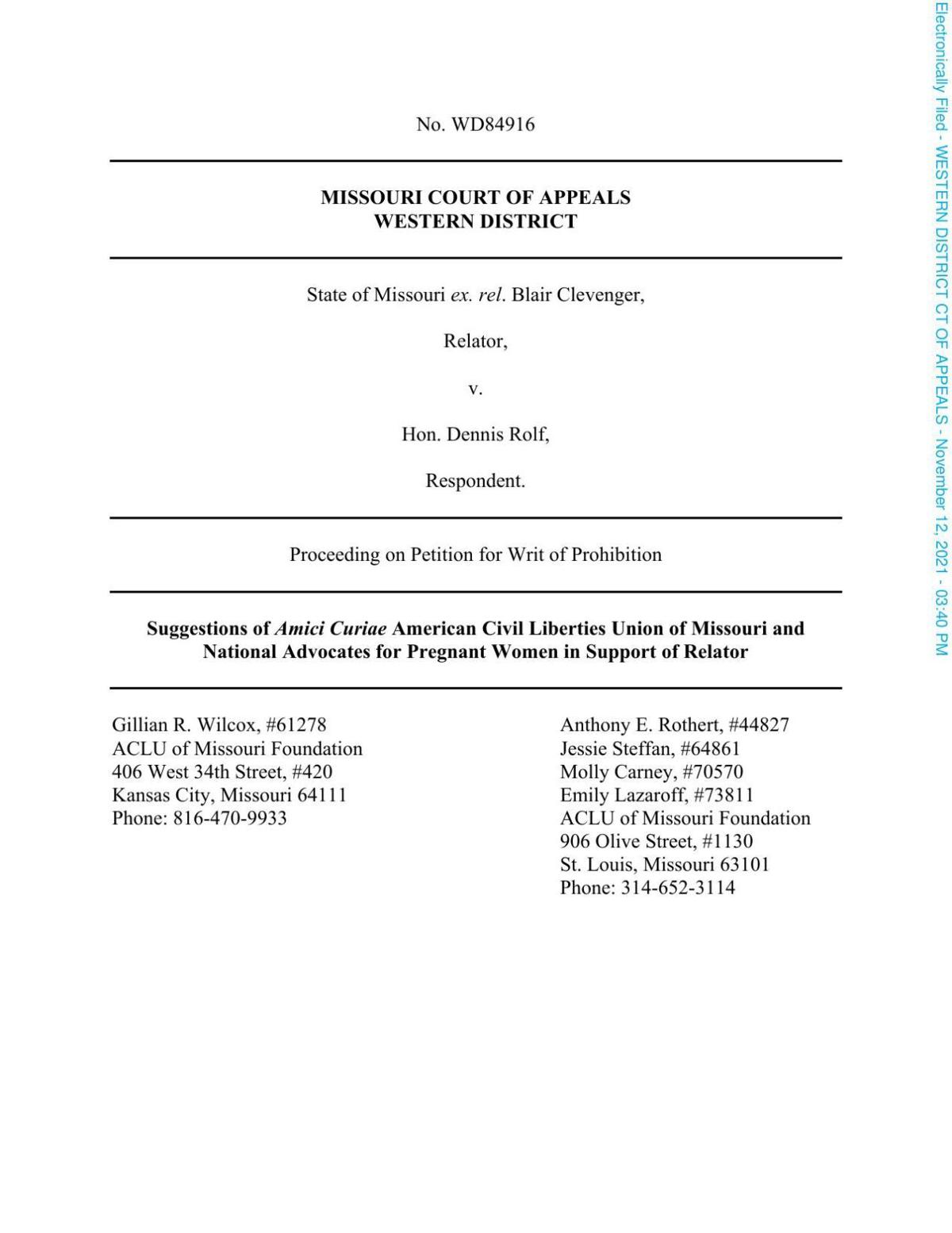 Missouri has a dubious distinction: More than half of the people in its state prisons are there because of probation or parole violations, many of them minor in nature, like Clevenger’s case. That rate is higher than all but two states in the nation. It puts Missouri taxpayers on the hook for expensive prison stays when less expensive and more compassionate alternatives are available.

I mention that statistic fairly frequently because it illustrates the stance that many judges and others in the criminal justice system in Missouri take. That somehow, putting a woman who battles drug addiction in prison because she smoked a joint to ease morning sickness somehow makes us safer or helps her in some process of rehabilitation or serves the greater good.

When Clevenger first faced Rolf at a probation violation hearing, she was confused as to what to say or do. This is something that happens in Missouri courts a lot. Here’s how the ACLU brief describes the scene:

“When Judge Rolf asked whether Clevenger was willing to admit to a violation of the conditions of probation, she stated, ‘I mean, I don’t really understand if that could hinder me or help me. I don’t understand either way. I’m a little off on how this all works, I’m sorry.’"

It takes longer to make sure that people like Clevenger are given every opportunity to make sure they only make decisions that won’t "hinder" them. It takes forethought to help people battling addiction avoid having their baby in prison and increasing the likelihood that they pass on their own difficulties to the next generation.

That didn’t happen in this case. Baby Clevenger will be born behind bars. It’s a slow-motion tragedy fit for the big screen.

Messenger: With a letter from prison, Bobby Bostic spreads hope through books

Yuma Territorial Prison is a relic of another time. Or is it?

Messenger: Missouri woman will have baby in prison because she smoked a joint on probation

Messenger: Missouri parolees back in court fighting for liberty, despite clear ruling in their favor

State appeals ruling that told it to protect the civil rights of Missourians before sending them back to prison.