For a group of 82 Missouri Republicans, Javier Alatorre is the new Willie Horton.

Horton, of course, was the star of the 1988 presidential campaign in which Republican George H.W. Bush adopted the age-old Southern strategy of trading on fear and race in his attempt to diminish his opponent, Democrat Michael Dukakis.

It worked. A powerful television ad blamed Dukakis, who was governor of Massachusetts, for Horton’s violent crime spree while on a weekend furlough from prison.

That was a different time. It was the “three-strikes-and-you’re-out” era of being tough on crime that contributed to the mass incarceration that these days has both Republicans (some of them, at least) and Democrats talking in sync about some elements of criminal justice reform.

State Rep. Justin Hill, R-Lake Saint Louis, has been one of those Republicans. A couple of years ago, the former police officer sponsored and passed an important bill that forced private probation companies to follow federal standards on drug testing. For the second year in a row, Hill is sponsoring a bill that would reduce probation sentences for people convicted of misdemeanors, in the same way that those convicted of felonies get probation periods reduced as an incentive for good behavior. And Hill was a supporter of last year’s legislation sponsored by Rep. Bruce DeGroot, R-Chesterfield, that undid a debtors prison scheme in Missouri that was jailing poor people for their inability to pay jail bills for previous stays on misdemeanor offenses.

This year, though, Hill is on the other side of an important criminal justice reform measure. 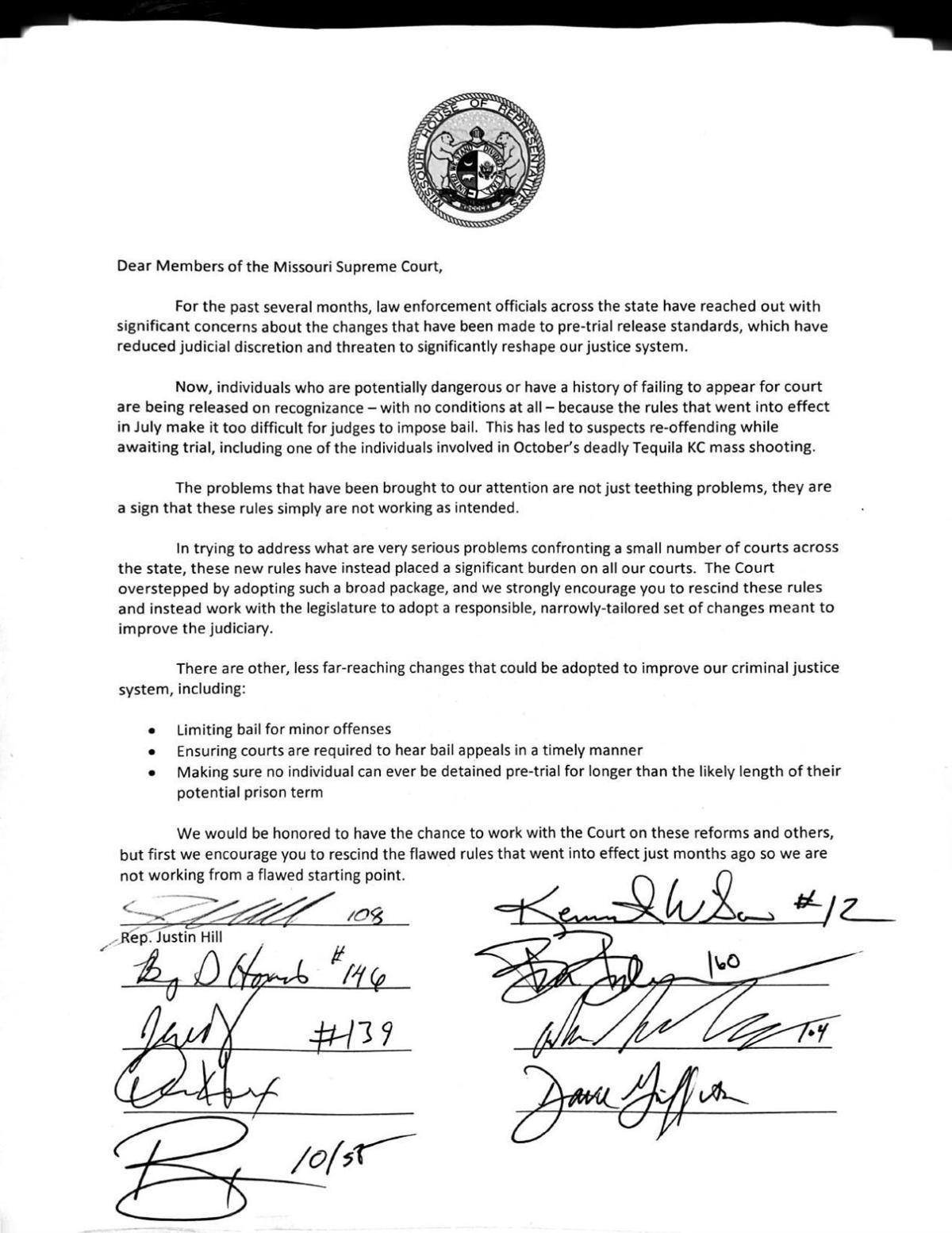 In July, the Missouri Supreme Court, after three years of comprehensive study, instituted new rules on the use of bail by judges that protect the civil rights of defendants. Previously, too many judges were refusing to hold the constitutionally required “ability to pay” hearings. People charged with crimes were being held in jail for days or weeks on cash bail they couldn’t afford, unable to get a hearing before a judge.

Here’s how Missouri Supreme Court Judge W. Brent Powell, a Republican who is likely the most conservative member of the court, explained the need for bail reform shortly before the new rules went into effect: “It didn’t happen in every case, but what I saw was that we had dangerous people with finances out on our streets and we had people who were poor, who weren’t a danger, remaining in our jails.”

The reforms are working. Jails all over the state are seeing a drop in inmate counts, as a result of both the bail rules and the new debtors prison law. In Dent County, for example, the Salem News reported the jail population had dropped from a high of 65 in 2018 to 17 in mid-2019.

But that creates a problem for local counties — and bail bondsmen — who depended on the revenue in a state that had been historically jailing thousands of people mostly because they were poor.

Before the Missouri Supreme Court even produced its new rules, the bail industry and its lobbyist — James Harris — were blasting them. Harris has a long history of attacking the court, having led several failed efforts to replace Missouri’s nonpartisan court plan with one that would allow dark-money special interests to choose Supreme Court judges with significantly less independence than the current system produces.

This brings us to Alatorre. He is referenced in a letter written by Hill and signed by 81 other Republicans to the state’s high court asking the justices to reverse themselves on the new bail rules. In October, Alatorre allegedly walked into a Kansas City, Kansas, night club and shot and killed four people, injuring five others. He had been released by a judge on his own recognizance a month earlier on charges of drug possession and for fleeing from officers. Alatorre, the state representatives suggest, should have been in jail. The judge, by the way, set multiple conditions on Alatorre’s release.

This is what happens when people who are free on pretrial release do something bad. It’s Horton revisited. The fearmongers cherry-pick cases — forgetting the thousands of other people who have been freed from jail and allowed to go home, work, care for families, and show up for court hearings.

If Alatorre is proof that the new bail rules are bad, what about Michael Dumas? Earlier this month he was sentenced to 34 years in prison for murdering a witness in a Cass County case against him. Dumas was out on bail in 2018 — under the old rules — when he went on his crime spree.

Sometimes, people accused of crimes do bad things when they are released from jail. That’s not a good reason to allow other people — many of them innocent or locked up just because they lack resources — to have their civil rights violated by a system more focused on money than justice.

Such a system also makes us less safe. A 2013 study found that people held on bail on nonviolent charges are more likely to re-offend compared to people in similar circumstances who aren’t jailed.

“The rules are really more of a reminder to judges of what’s required in the constitution,” Fox says. She hopes the Missouri Legislature stays out of the judicial branch’s business. “You can’t just lock people up because you think they did something.”

Tony Messenger has written about Missouri cases where people were charged for their time in jail or on probation, then owe more money than the…