LIVE: STL area coronavirus updates, May 27. Here's what we know

Coronavirus update: Only half of Americans say they would get vaccine. Here's the morning's latest.

Messenger: Rising waters, two felons and a get-rich-quick scheme. A Mississippi River tale.
0 comments
Share this
Subscribe for $1 a month
1 of 2 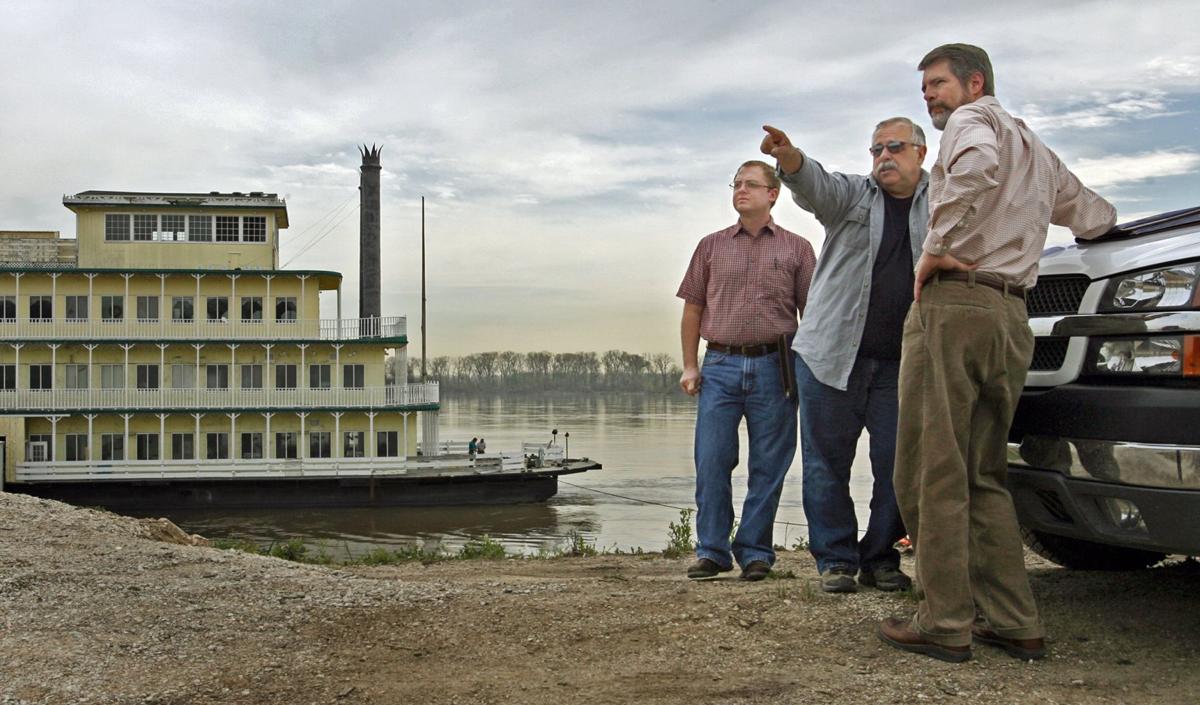 In this April 17, 2007, photo, Tony Daniele, center, talks about his plans for 70 acres next to the Mississippi River at Interstate 270 in north St. Louis County with land development engineers Jason Clark, left, and Dennis Denby, right. Daniele bought the old riverboat "Belle of the Night" and moved it next to his property as part of his future plans. J.B. Forbes | Post-Dispatch

Mark Repking is no Robin Hood.

That was the conclusion of three federal judges in 2006 when they decided that the ex-banker from Alton deserved more than one day in prison after pleading guilty to making false statements and filing false tax returns.

Repking was the president of Liberty Bank when he faked bank documents and ultimately embezzled about $600,000. Federal prosecutors protested when a judge bought Repking’s hard luck story — “Success came to me too early,” he said at the time — and ignored sentencing guidelines calling for a much stiffer sentence.

“We leave open the possibility that a one-day sentence of imprisonment might be justifiable for a defendant who rivals Robin Hood,” the judges wrote, “but Repking, a millionaire who stole for himself and his friends, is not that defendant.”

He went back to court and was sentenced to a year in prison.

Now Repking is back in the public eye, hawking the long-discussed development of a north St. Louis riverfront property that was once sought for a casino and now is being pitched as a possible future marina, hotel, boardwalk, gas station, residential neighborhood and maybe even a senior retirement village.

You name it, Repking and his partners have suggested it for the so called “Lighthouse Development” on Riverview Drive.

“There has been plan after plan after plan for this location,” says Alderman Dionne Flowers, 2nd Ward. She’s filed two board bills, one rezoning the property to commercial from residential, and another creating a special use district that would allow all sorts of uses. “They don’t really have any confirmed folks going in there.”

Mike Clark is not. A self-described river rat, Clark is the founder of Big Muddy Adventures, an outfitter that gives tours in canoes and kayaks on the Missouri and Mississippi Rivers. Clark knows the St. Louis riverfront — all of it — as much as anybody in the area, and he’s not buying what Repking is selling, particularly a marina for motorized boats in an area where such vessels are rarely seen. In part, he says, that’s because it’s one of the most dangerous parts of the Mississippi River, just north of the Chain of Rocks Bridge.

“I certainly don’t see it,” Clark says. “There are no boats out there. There never have been. It’s very dangerous. If there was a marina there today, it would be under water.”

We talked on Monday, as rivers throughout the St. Louis region, and the entire state of Missouri, were rising, some to record highs. For the second time in 16 months, the Mississippi was topping 34 feet in the north riverfront area. A few years ago, the Repking property, a former golf course, would have been under water, but for the past few years the owners of the property have been raising it, with fill dirt and rocks, in anticipation of future development.

Veterans of flooding analysis in the region, people like Washington University professor Bob Criss, know what that means. When land that is supposed to flood gets raised, the water becomes somebody else’s problem.

Indeed, that sort of diversion is what I got when I called Repking to ask him about the Lighthouse Development.

In city planning documents, Repking is listed as the owner of the property.

“Mark has been the one that has been pretty much talking to us about everything,” said Flowers, who said she didn’t know about Repking’s felony conviction related to the bank embezzlement.

But he’s just the financial adviser, he told me. The owner is Beth Daniele, who owns Discovery Pier Land Holdings LLC, Repking says. Secretary of State records confirm that, though the contact information for the company is Repking’s email address. That company used to be owned by Tony Daniele, who is married to Beth.

In 1988 he was convicted of mail fraud and extortion in a scheme involving the city’s police pension fund. Daniele was sentenced to eight years in federal prison. A civil jury cleared him of responsibility in a related lawsuit, but the federal prosecutor stood by the criminal conviction. In a fit of anger while maintaining his innocence, Daniele famously held a police commissioner hostage. He let him go in negotiations with federal officials and ultimately received probation.

If anybody knows how dangerous the current of the Mississippi is along the north riverfront, it should be Daniele. A decade ago, he parked an old entertainment barge — the Belle of the Night — at a makeshift dock, pitching a different get-rich-quick scheme. Disney on the Mississippi, he called it. Heavy May rain pushed the river high, and the Belle broke from its moorings, held by a single safety cable. Quick work by Coast Guard tow boats kept the ship from cascading down the angry river and causing untold disaster.

The water is high again. So are city hopes that a vacant riverfront property holds promise of untold riches. Before they move forward on the latest plan to steal from the flood plain, city aldermen need to ask an important question:

Who is robbing whom?

Messenger: Pier St. Louis developers back for handout from city already on the hook

When policymakers take land out of flood plain, somebody else suffers. Every single time.

In this April 17, 2007, photo, Tony Daniele, center, talks about his plans for 70 acres next to the Mississippi River at Interstate 270 in north St. Louis County with land development engineers Jason Clark, left, and Dennis Denby, right. Daniele bought the old riverboat "Belle of the Night" and moved it next to his property as part of his future plans. J.B. Forbes | Post-Dispatch