It won’t be as an attorney, but as the star witness.

On Monday, St. Louis Mayor Tishaura O. Jones and St. Louis County Executive Sam Page joined forces on a lawsuit seeking to have a Cole County Circuit Court judge declare as unconstitutional a law passed by the Missouri Legislature that seeks to nullify all federal gun laws in the Show-Me State. 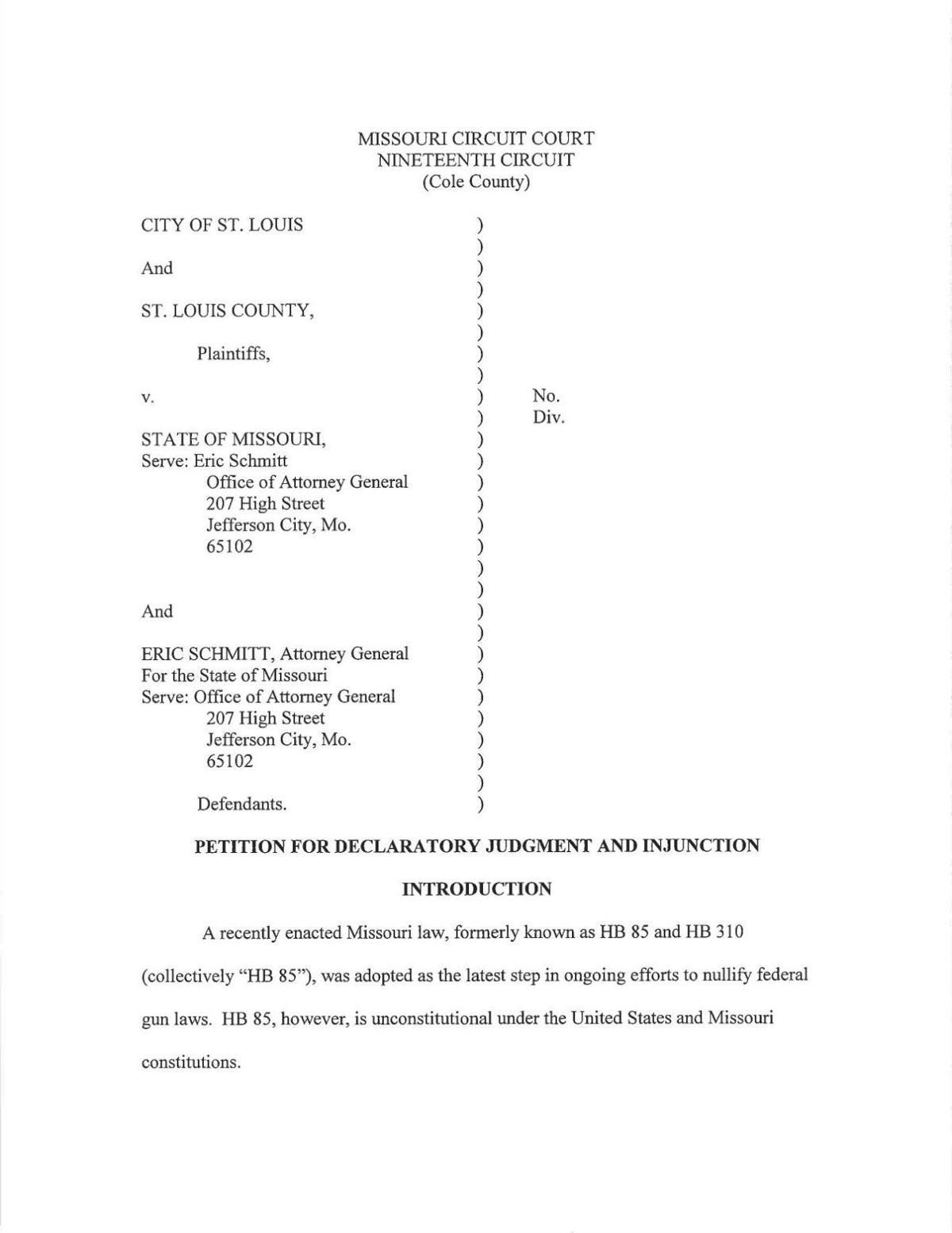 There is little doubt the lawsuit will prevail, and that’s before you even get to the central question of whether the bill is unconstitutional because it ignores the Supremacy Clause of the U.S. Constitution. That clause says federal law trumps state law in most matters. The law as passed by the Legislature is riddled with errors and violates the Missouri Constitutional prohibition against bills dealing with multiple subjects.

“In misguided zeal to prevent imaginary threats to the right to keep and bear arms, the political branches in our state government blatantly violated the federal and state constitutions by attempting to nullify federal gun laws,” the lawsuit reads. “The consequences of HB 85 are tangible and real: they will make it easier for criminals to use guns in committing violent acts, they will give gun violence a safe haven in Missouri, and local governments like the plaintiffs may be disqualified from receiving federal grants and technical assistance through the United States Department of Justice. It is up to this Court to declare HB 85 unconstitutional. It should do so now.”

Schmitt, who is named as a defendant in the lawsuit, will likely defend the state of Missouri in it. The candidate for the Republican nomination for Senate has made it clear in public statements that he supports the law.

But his actions suggest something else. Right before the law went into effect, as my Post-Dispatch colleagues Robert Patrick and Jack Suntrup reported last week, Schmitt started withdrawing his employees from various federal cases they were prosecuting in conjunction with the U.S. Attorney’s Office. Dubbed by Schmitt the “Safer Streets” initiative, the assistant attorneys general had been deputized by the federal government to help battle violent crime — especially gun crime — in St. Louis, Kansas City and other parts of Missouri.

Every chance he’s had in the past two years, Schmitt has pounded his bully pulpit and declared Safer Streets to be a massive success in keeping St. Louis safe. Now, it seems, the magical plan to rid the city of crime has gone “poof.”

Schmitt was right to pull his prosecutors off the cases. The law that he claims to support creates legal and financial jeopardy for any law enforcement agency that seeks to enforce any federal gun laws. It’s why O’Fallon, Missouri, Police Chief Philip Dupuis says he resigned his position after the law took effect.

The hearing to declare the poorly conceived federal gun nullification law unconstitutional should be a short one. There should be one witness:

Why did you pull your prosecutors off cases filed by the U.S. Attorney’s Office that sought to put dangerous criminals in court?

Schmitt: Could you repeat the question?

Were you afraid of the liability Missouri taxpayers would have if your office continued to cooperate with federal officials on gun cases?

Schmitt: I really have a fundraiser to get to, can we move this along?

Do you agree with the plaintiffs that the law as passed “quite literally defunds the police and gives that taxpayer money to convicted criminals?”

All Missourians, especially those who are the most fervent supporters of the Second Amendment, should object to the charade to which Schmitt, Gov. Mike Parson, and the Republicans who passed HB 85, are subjecting the state, because the bill doesn’t actually protect anybody’s right to bear arms, and, in real time, is making the state less safe.

As a witness to the real damage the law has already caused — as compared to his role as a Senate candidate, where he lives in a fantasy world — Schmitt would have to testify under oath.

And the truth shall set him free.

For second time in a year, Missouri attorney general fails to serve defendants in lawsuit, in effect making it moot.