Melonie Politte bought a new house in south St. Louis County last year. It’s not very big, but her two children are grown now. There’s a room for her brother to move in.

Michael, her brother, is in the Jefferson City Correctional Center. He’s been in jail or prison for 22 years, since he was 14 years old. He was charged and convicted of setting his mother on fire and killing her, in the small trailer near Potosi where they lived.

He and his sisters have always maintained his innocence. Now they hope a new legal filing will set him free. On Monday, Michael Politte’s attorneys filed a habeas corpus petition with the Western District Court of Appeals in Missouri seeking to set aside his conviction. 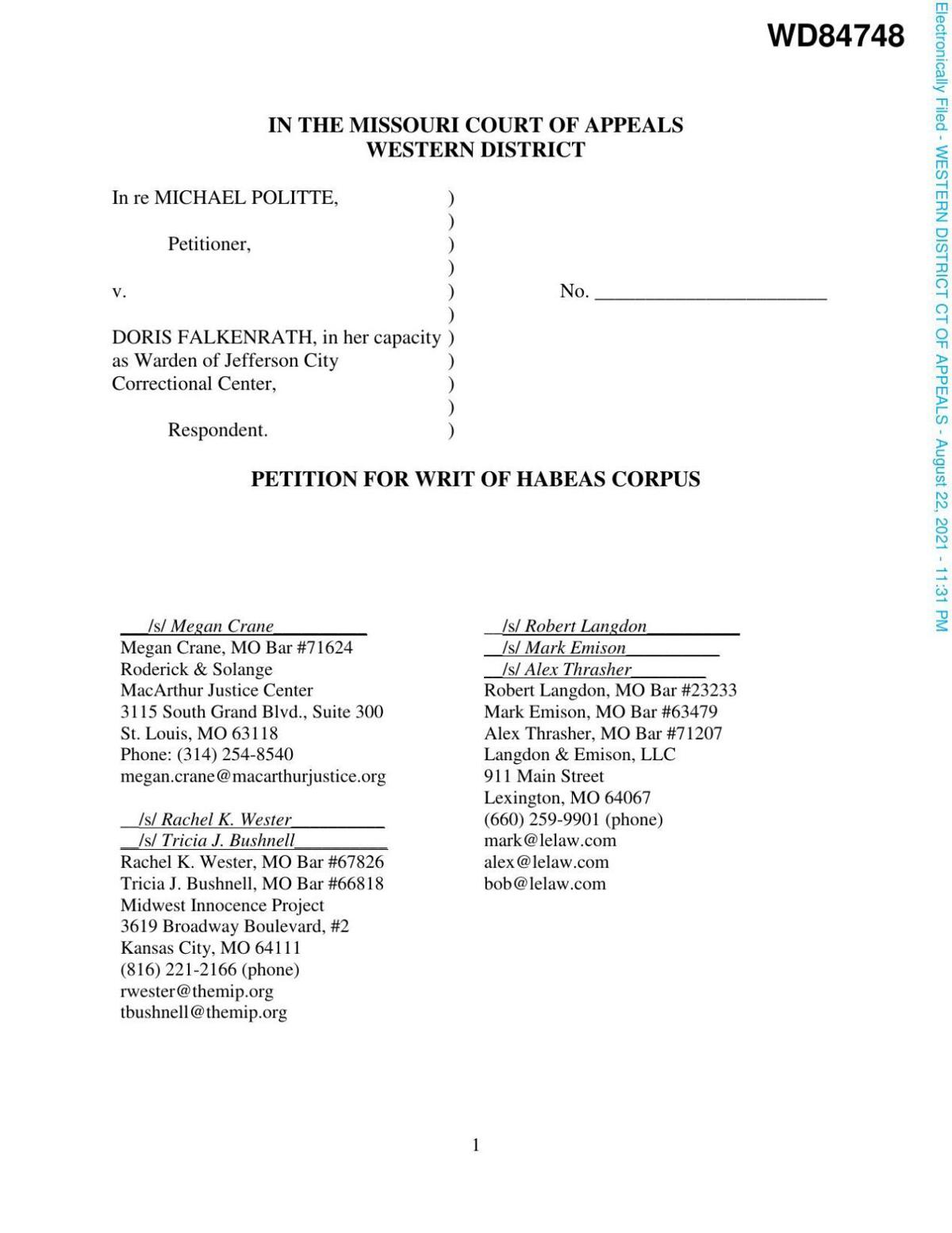 “No valid evidence has ever connected him to this crime, and he has steadfastly maintained his innocence,” says the petition, filed by the Midwest Innocence Project and the MacArthur Justice Center. “His conviction rests upon false fire science and lies told by the State. As a result of this State misconduct, Michael and his sisters have spent decades waiting to properly grieve their mother because they have instead been fighting for Michael’s freedom. Rather than healing from this tragedy with his sisters, Michael is currently serving a life sentence for second-degree murder.”

The “lie” is the one told at Michael’s trial, the one that said investigators found gasoline on his sneakers. It wasn’t true, and now, for the first time, the state admits it made a mistake. Filed with the petition is a letter from the state’s crime lab explaining that the original test that indicated that Michael’s shoes were doused in gasoline (which was used to burn his mother) was wrong. In the time since the crime, the state’s crime lab has adopted more advanced procedures, and also determined that many tennis shoes contain solvents that in testing show similar patterns to gasoline. Advancements in testing can distinguish between the two.

Michael’s tennis shoes did not contain gasoline, the crime lab now says. That was the primary piece of evidence that tied him to the crime. What makes the case that much more tragic is that the crime lab had changed its procedures from the time Michael was arrested, to the time he was put on trial four years later. But the lab didn’t re-test the shoes, and the prosecutor presented the evidence to the jury, and it went unquestioned by Michael’s public defender.

“This was a kid who was suspected immediately based on no legitimate evidence or reason,” says Megan Crane, one of Michael’s attorneys. “They singularly focused on him within hours of the crime simply because they made wrong assumptions about how he was acting.” 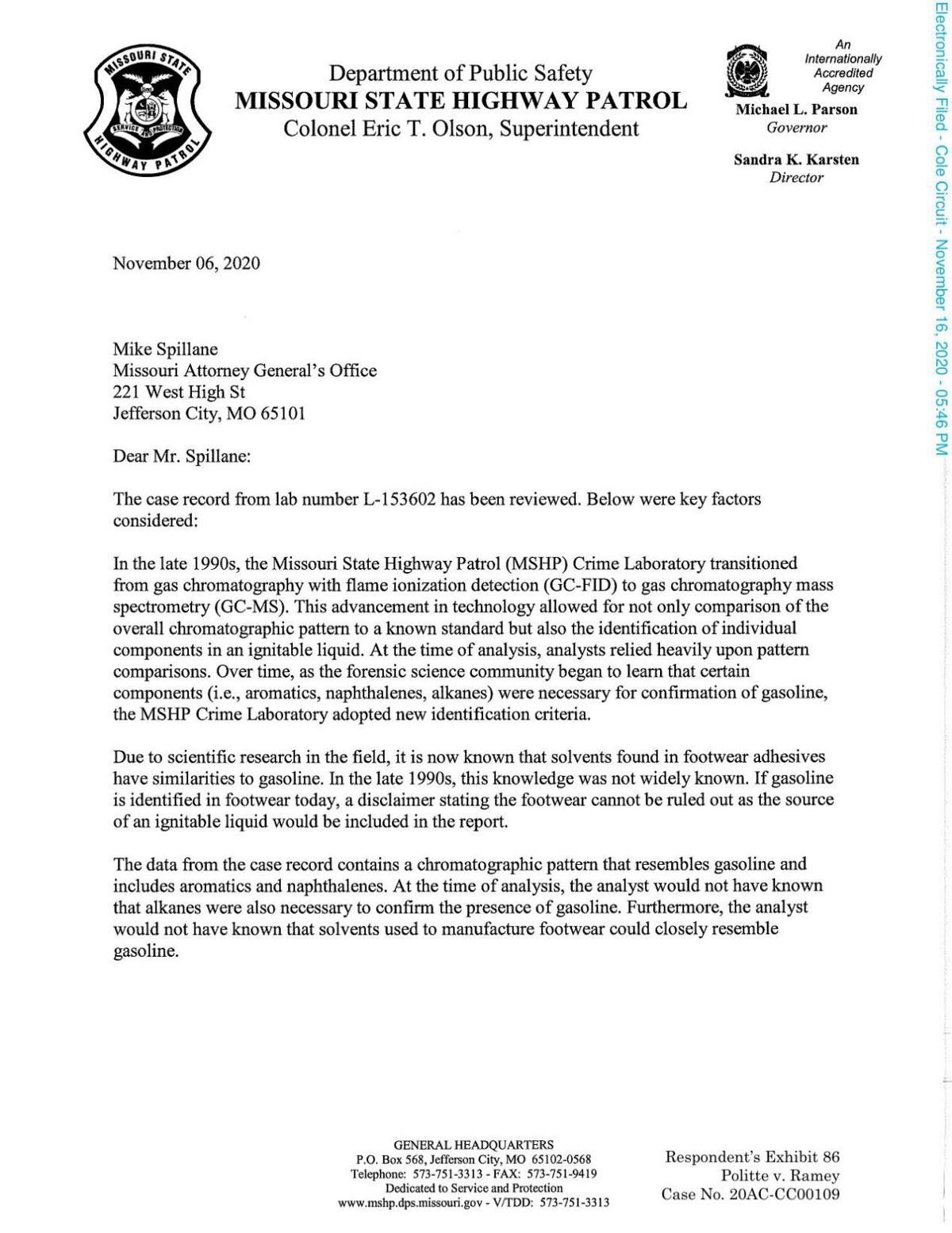 One of the deputies at the time has filed an affidavit in the case saying that she has long had suspicions that Michael was innocent. In her affidavit, former Washington County Deputy Tammy Nash says that officers rushed to judgment at the scene of the crime, where Michael found his dead mother, who had also suffered a blunt trauma to the head.

“Other officers focused on Michael right away and assumed he was guilty because they just did not think he was telling the truth and they thought he was acting odd,” Nash wrote. “I disagreed; Michael was a fourteen year old kid who had just found his mom dead. I wondered how did they expect him to act after this trauma.”

From prison in Jefferson City, Michael remembers the situation similarly to Nash.

“It felt like they were trying to convince me that I had done something,” he said, recalling the intense questioning over 48 hours. “They didn’t have any understanding of what a child would be going through that at the moment.”

Michael’s sisters, Crystal and Melonie, believed their brother was innocent. They had other suspects, including their father, but police focused all their efforts on the 14-year-old who found his mother, Rita, burning on the floor of their mobile home.

“I don’t want anybody to experience the things that I’ve experienced,” Michael says. “I was a 14-year-old kid. I had my whole life ahead of me.”

If the petition seeking his freedom is successful, he has a room waiting for him at his sister’s home. She tries to be hopeful, while recognizing that the slowly moving justice system has failed their family before.

“This whole situation has destroyed all of our lives,” Melonie says. “We were a happy family and now we have just each other and that’s it.”