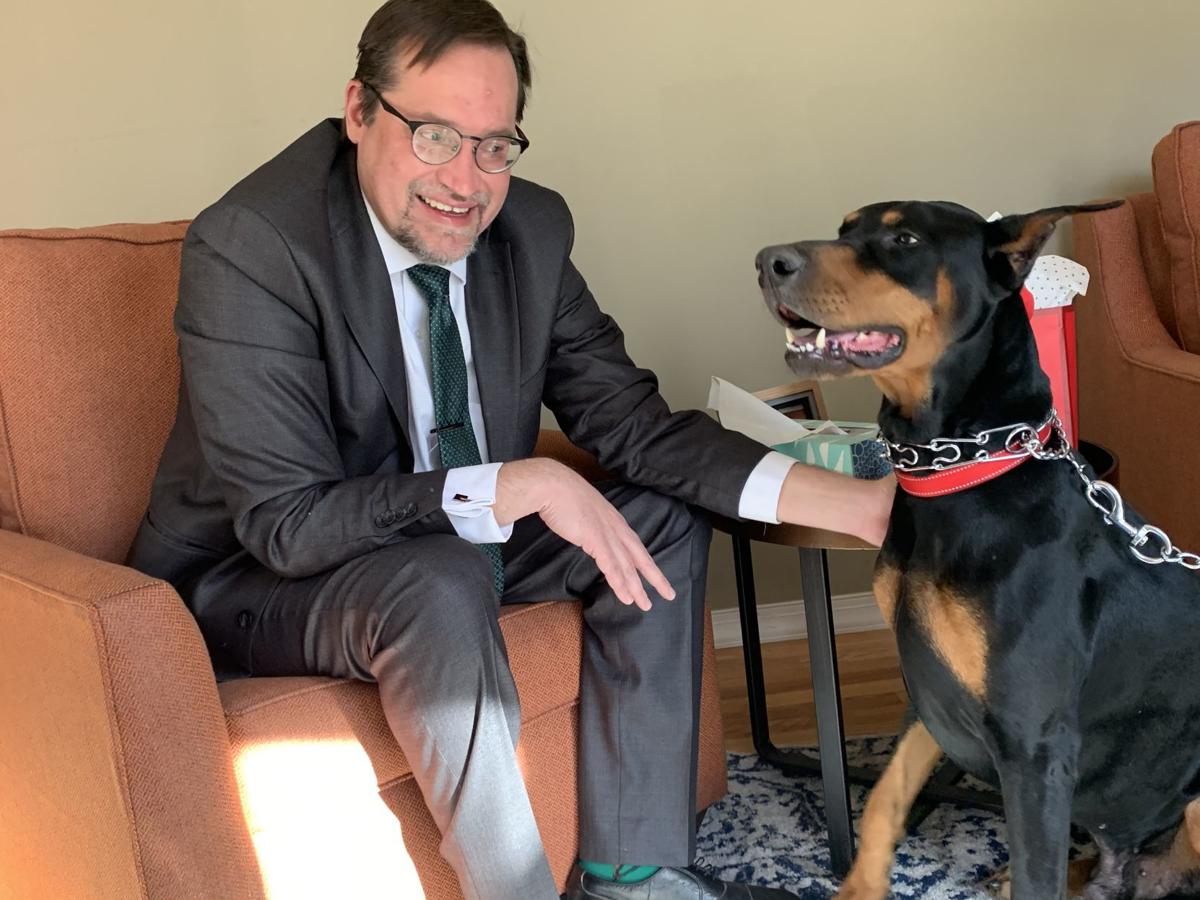 Attorney Dan Kolde, left, and his “client,” Stanley, greet each other Jan. 5, 2020, at the home of Sandy Macke-Piper. 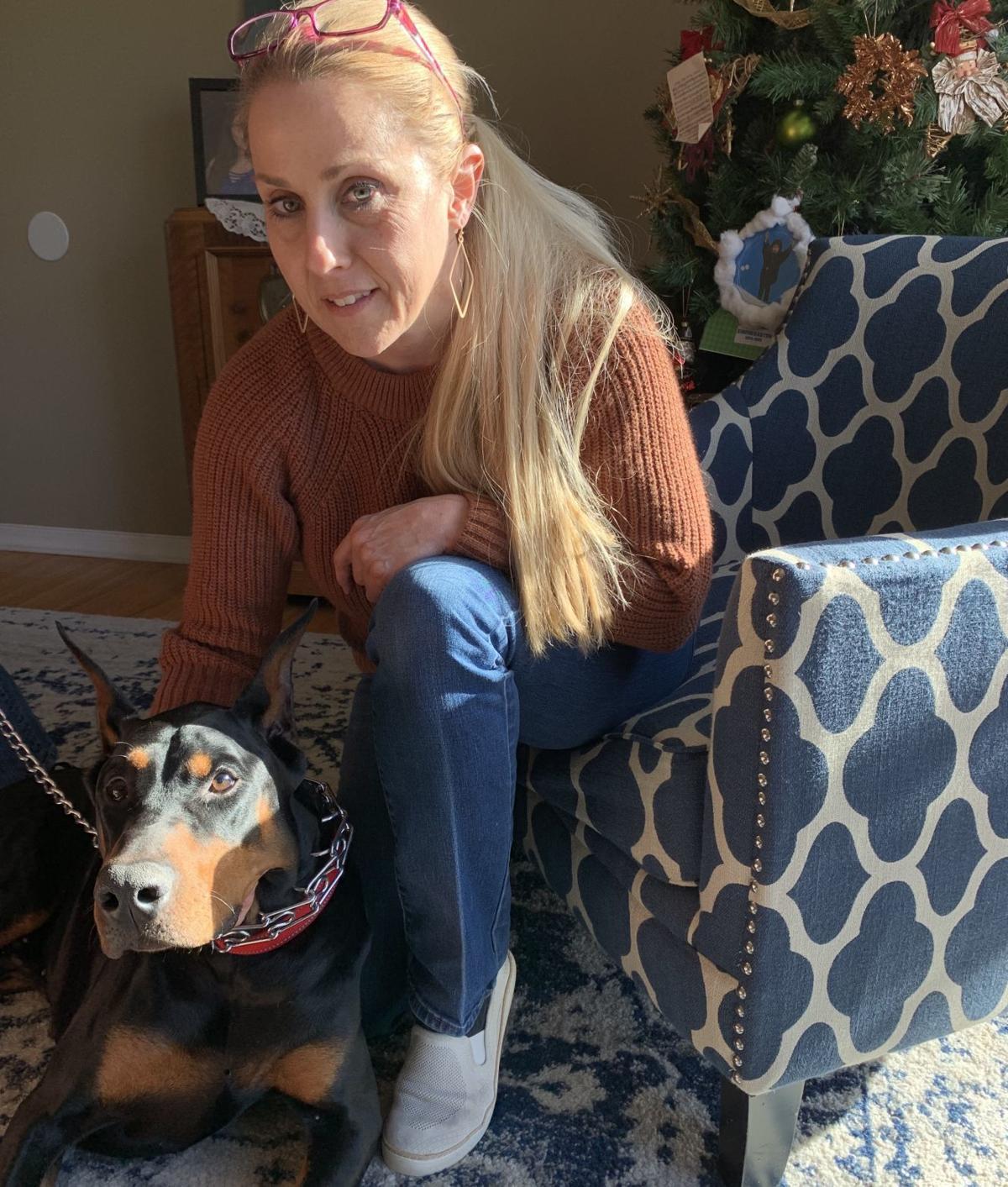 Sandy Macke-Piper poses in her Chesterfield home with her dog, Stanley, who she shares with Kaitlyn Boal.

“Stanley Comes Home” could be a Hollywood movie.

It starts with a tragedy that leaves a dog separated from his family.

The dog — I’d cast actor Morgan Freeman as his voice — ends up thousands of miles away in another state, with strangers who give him a new name. Meanwhile, family and friends are frantically trying to get him back. They contact a lawyer and reporters, and alert a nationwide network of social media animal lovers to assist them.

There are villains — a dog catcher and an out-of-state breeder — though in the end, the breeder takes on the depth of a character in a Clint Eastwood-produced movie. He’s flawed, but not all bad.

In the end, Stanley is reunited with his family. He jumps up and down and licks faces and barks in joy.

At the end of the movie.

We’re at the Chesterfield home of counselor Sandy Macke-Piper, who lives there with 22-year-old Kaitlyn Boal, whose parents, Michael Boal and Bobette Everhart-Boal, died tragically in early December.

Stanley is there. He’s playful and loving, licking the hands and faces of visitors, including attorney Dan Kolde, who worked to reunite the 4-year-old Doberman with his family.

That reunion happened Dec. 29 at Purina Farms in Gray Summit, where Ohio breeder Bob Hallahan brought Stanley to be reunited with Kaitlyn, and his fellow new owner, Macke-Piper.

“Kaitlyn was so happy,” Macke-Piper says. And Stanley “was really happy to see her. He jumped up and almost knocked her down.”

Kaitlyn hadn’t seen Stanley in more than a year. That was because of the circumstances that led to both of her parents dying. They had been estranged. More specifically, Everhart-Boal had been in hiding, afraid of the possibility that Boal would kill her over a recent divorce filing.

That’s what happened. Boal found his estranged wife, killed her in the parking lot outside the apartment she was sharing with Kaitlyn, left Stanley in the car there, and then returned to his Wildwood house, which he set on fire before killing himself.

Stanley ended up in the care of the St. Louis Animal Control and Care Shelter, where, despite pleas from family friends — who said the kids needed time to mourn before they figured out where Stanley would end up — workers let Hallahan come claim the dog he had previously sold.

Macke-Piper, who had been counseling Everhart-Boal and mentoring her daughter, described what happened as a “game of telephone” gone bad, where lots of people trying to act in either the kids’ best interest or Stanley’s were calling and emailing the shelter, which rushed to reach the wrong conclusion.

“If they had just given it a few days,” she laments.

It took her awhile, but she convinced Hallahan that Stanley belonged with Kaitlyn, who needed some time to “try to find her new normal.”

Hallahan agreed, and in the meantime, he gave the two women a lesson in how to take care of a Doberman. It turns out, Michael Boal hadn’t been taking good care of Stanley. Now the dog has a new home, with the young woman who hadn’t been allowed to see him for the past year during her parents’ estrangement, and a family friend who helped bring a happy-ish ending to this movie. Stanley even gets to Facetime with Kaitlyn’s brother, Andrew, who is at medical school at Vanderbilt University.

Hallahan, who is “very much a dog person,” Macke-Piper says, was moved by the outpouring of love for Stanley.

From his perch in the living room, looking out the big bay window in front of the house, Stanley takes in his new surroundings. A neighbor taking a dog for a walk draws his attention. Stanley barks a friendly hello.

“I think I’m going to like it here,” says the Morgan Freeman voice as Stanley wags his tail.

Messenger: Breeder to children of deceased parents: Stanley, your family pet, is no more.

Attorney Dan Kolde, left, and his “client,” Stanley, greet each other Jan. 5, 2020, at the home of Sandy Macke-Piper.

Sandy Macke-Piper poses in her Chesterfield home with her dog, Stanley, who she shares with Kaitlyn Boal.