ST. CHARLES — A man convicted in a confrontation on the Highway 370 bridge that led to a motorcyclist plunging to his death was sentenced Tuesday to 14 years in prison.

Timothy A. Walker, 47, of Warren County, received a 10-year term for first-degree assault and a consecutive four-year term for armed criminal action in the Aug. 23, 2020, encounter that led to the death of Timothy Perkins.

Perkins, 44, drowned in the Missouri River and was found days after his motorcycle slammed into the back of Walker’s truck on Highway 370, authorities said. Perkins was married to a woman who had been dating Walker.

Assistant Prosecutor Tanya Muhm said Tuesday in court that Perkins had been following Walker after Walker texted him an explicit video that “triggered all the animosity” between them.

Walker slammed on the brakes of his pickup truck while on the bridge, causing Perkins’ motorcycle to rear-end him, Muhm said. At one point, Walker reversed the truck and hit Perkins’ motorcycle before driving off without calling police. He later called Perkins’ wife to say Perkins wouldn’t be bothering him anymore.

Walker told police Perkins was waving a gun at him while chasing him and that’s why he slammed on his brakes, charges said. He denied reversing his truck to run over Perkins but admitted to leaving the scene. Police said they found a gun and two ammunition magazines in Perkins’ motorcycle.

It is not clear how Perkins wound up in the river. Walker claimed that Perkins jumped off the bridge but Circuit Judge Michael Fagras, who presided over Walker’s bench trial in February, rejected Walker’s self-defense claim, saying he found Walker’s testimony about the gun and jumping off the bridge “improbable” and “incredulous.”

Walker’s lawyer, Will Goldstein, argued in court Tuesday that Walker acted in self-defense. He said it’s “regretful” that methamphetamine use is what underscored the actions in the case.

“It is the entire subtext to this in entire case,” Goldstein said. “In my estimation, none of this happens but for methamphetamine.” 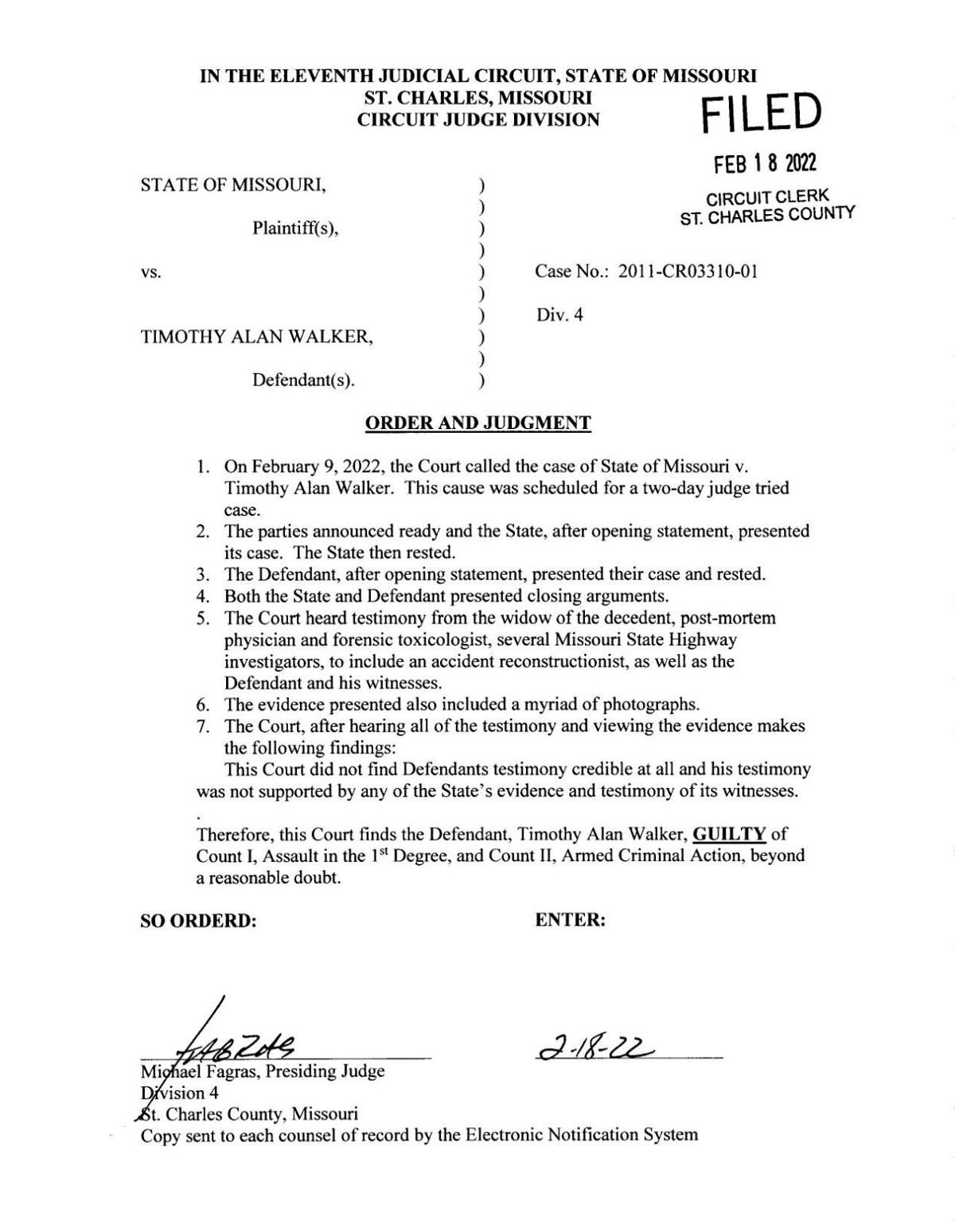 Perkins’ wife, Barb Perkins, left the courthouse in tears Tuesday, saying she felt the sentence was too light.

Perkins’ daughter said in court Tuesday that her older son routinely cries at the thought of never seeing his “paw paw” again and that she suffers from anxiety over the death of her father.

“My dad was the rock of our family,” Alyssa Perkins said. “It hurts my heart knowing that I’ll never get to see him or talk to him again.”

A man and woman were found dead in an apparent murder-suicide in Moscow Mills. Police haven't released their names.

Grocery worker assaulted by man with gun, knife who was banned from St. Louis store

The manager, in his late 40s, suffered cuts to his face and hand and was treated at St. Louis University Hospital. "He's okay," store owner Chris Goodson said.