470 years of experience gone: Kimberly M. Gardner has lost more lawyers than she had when she took office
0 comments
Share this
{{featured_button_text}}
1 of 4 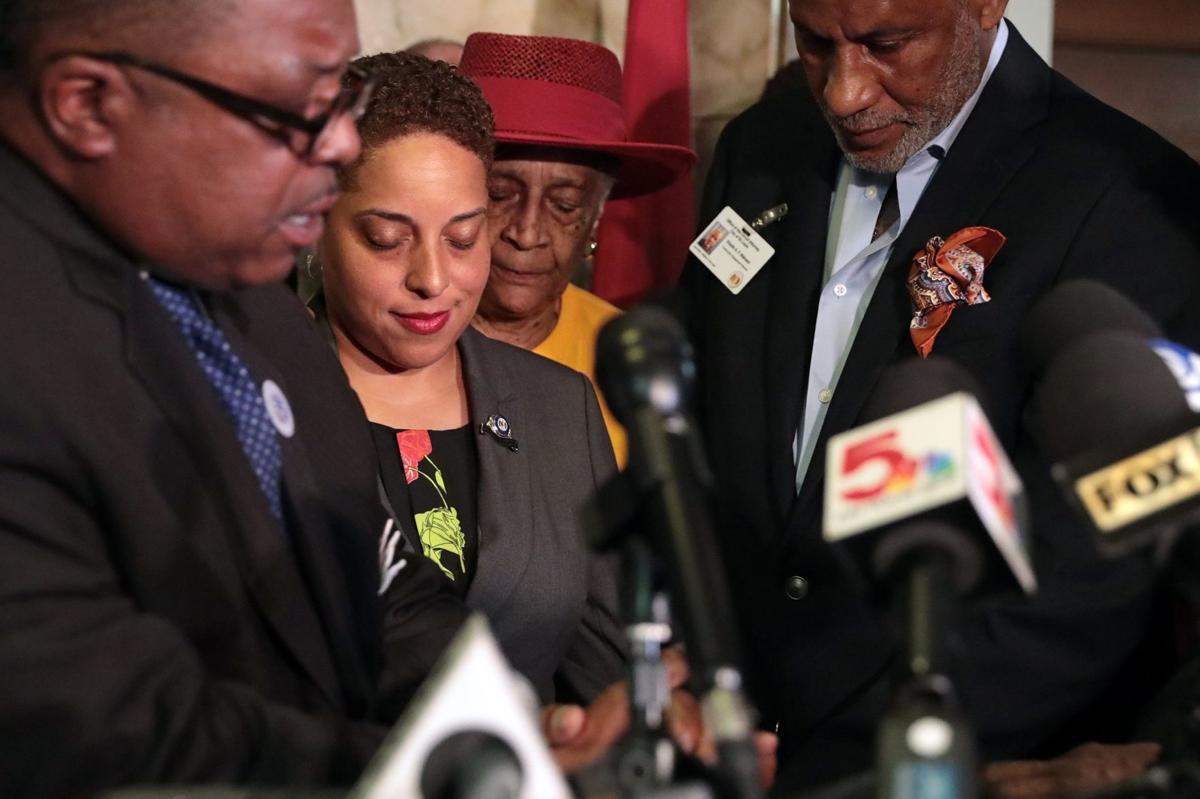 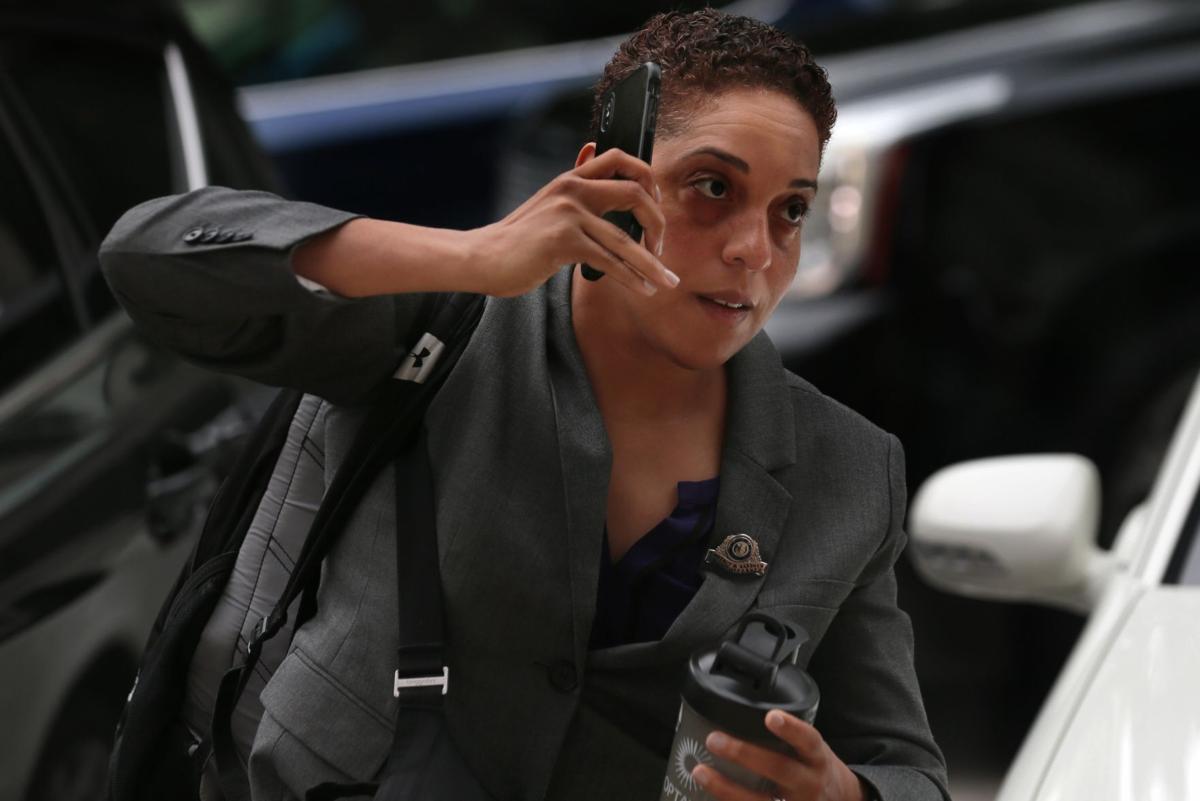 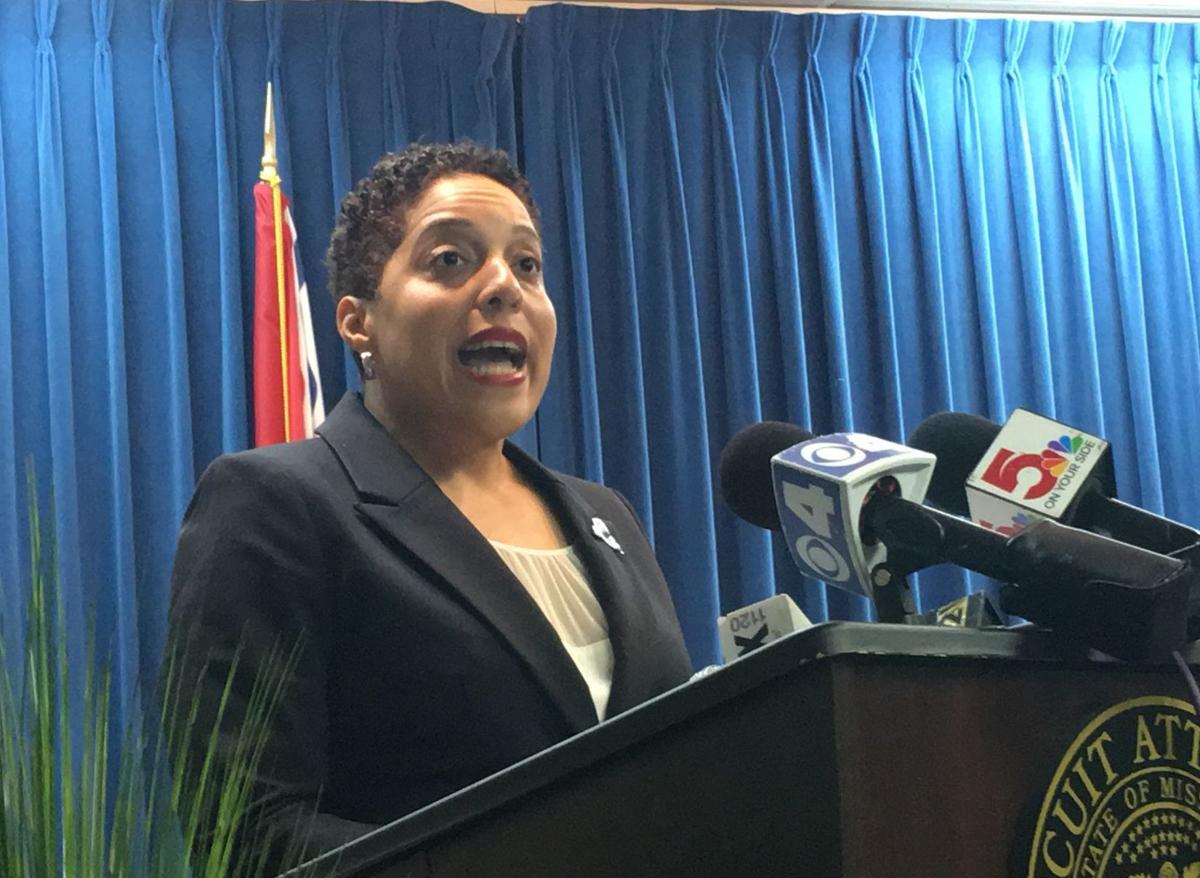 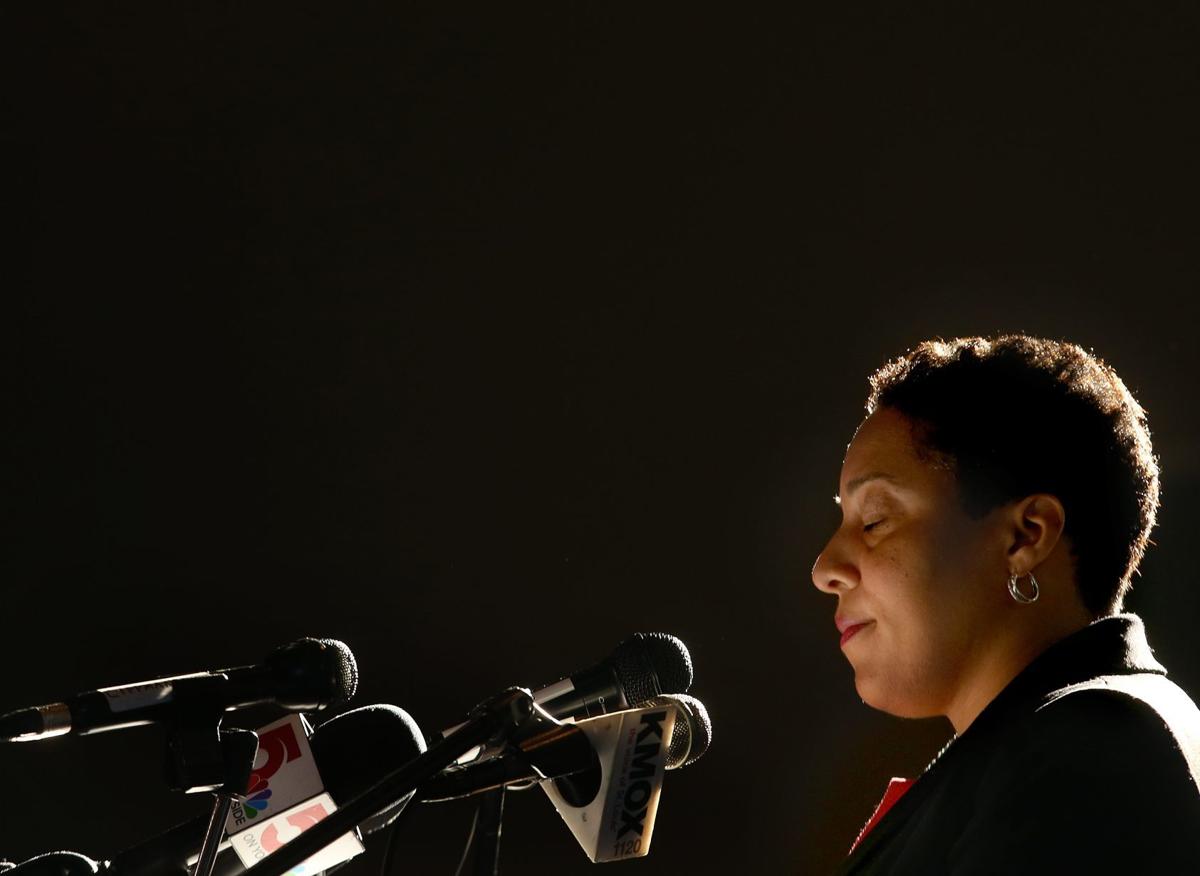 ST. LOUIS - More than 65 prosecutors have quit or have been fired from the Circuit Attorney's Office since January 2017.

That’s a half-dozen more lawyers who have left the office than were on the staff roster when Kimberly M. Gardner took charge.

Some prosecutors became judges. Many forged new paths in criminal defense or civil practice. Others now teach criminal justice at area colleges, while a few retired from law after decades as prosecutors.

But for months, a short-staffed roster of prosecutors has been scrambling to manage a caseload already in decline.

The more than 100 percent turnover rate in Gardner's office means a combined 470 years of experience prosecuting crimes in St. Louis has fled elsewhere, according to a Post-Dispatch analysis of staff rosters. The effect, according to former staffers and defense lawyers, is a state of dysfunction, low morale and a dearth of legal wisdom necessary to safeguard the public from potentially dangerous criminals.

“It's not normal to lose that many people," said former Assistant Circuit Attorney Jeff Ernst, who left last year to join his brother in private practice. “The real concern is you don’t have the people that are entrenched that can teach the people fresh out of law school how to be prosecutors.”

Such an exodus may not be unheard, though, of when regimes change. In Philadelphia, progressive reform District Attorney Larry Krasner lost more than 25 percent of his staff in his first year, according to the Philadelphia Inquirer. This past spring, the Miami Herald reported the Miami-Dade State Attorney's Office losing dozens of assistant prosecutors to higher paying jobs in the private sector.

Fewer than 15 assistant prosecutors who served under former Circuit Attorney Jennifer Joyce remain. The turnover means serious cases routinely get reassigned to those without the experience or time necessary to prepare for trial, critics say. As a result, major cases often get dismissed on the eve of trial.

"They're just thrown into a situation and doing the best they can," Ernst said. "But if they had more training and more experience, I think they'd be in a better position to do it."

Mary Fox, district public defender in St. Louis, says high turnover is natural and that her office, too, constantly struggles to keep pace the departures. She said about two dozen lawyers from her staff of 28 public defenders have moved on since the start of 2017.

"If she's willing to bring change to how we look at the criminal legal system, I am willing to listen to her perspective," Fox said.

Others say the exodus is anything but normal.

Bennett L. Gershman, a law professor at Pace University in New York and and former prosecutor in Manhattan, said the turnover rate in Gardner's office is "astonishing," considering more than a dozen of those who left Gardner brought on to support her reform agenda.

"It appears to me to be far out of the ordinary," Gershman said. "It's very unusual for persons who are just hired and coming into the office with enthusiasm and of a mind focused on professional prosecution, serving the public, making the community safer and doing justice, that all of a sudden, they leave."

"If looks like a crisis to me," he said. "That has a drastic, drastic impact on the system."

Changes in leadership, direction and vision often bring about turnover, said Tim Lohmar, president of the Missouri Association of Prosecuting Attorneys who is also St. Charles County's elected prosecutor. Major staff upheavals, he said, can make it tough to maintain momentum on cases and puts more pressure on remaining prosecutors as well as crime victims.

"The victims are the only ones in the system who didn't ask to be there," Lohmar said.

Frequent critics of Gardner say that even with her reformist approach to criminal justice that prioritizes serious, violent cases over petty crimes like marijuana possession, the exodus of experienced prosecutors has led to fewer convictions and a rising dismissal rate.

Terry Niehoff, a longtime St. Louis defense lawyer, former Jefferson County prosecutor in the 1980s and frequent critic of Gardner, said the Circuit Attorney's Office — except for a core group of veteran prosecutors — is "falling apart" under her leadership.

"Quite honestly, the office is made up of rookies and that’s why I think the win-rate is so bad," Niehoff said. "Certainly, the results are better for the defense bar, but it’s actually a lot more difficult to deal with them because there's no consistency in their office, and everybody’s afraid to do things because they'll get fired on a whim."

Statistics from the 22nd Circuit Court show the dismissal rate of felony cases over the past 32 months show the number of dropped cases is the highest it has been in a decade. Through August of this year, the Circuit Attorney’s Office has dropped 31 percent of all cases disposed of this year, more than double the dismissal rate in more than a decade except for last year, when it was 23 percent.

"I'm a city resident, and it's scary," Niehoff said. "There's no assurance that if you're a victim of crime, that you or your cases are going to be treated well. I just feel like the prosecutors' office is just a mess."

About half of the prosecutors who left did so in Gardner's first year. Gardner initially downplayed the turnover, telling the Post-Dispatch in she believed most of those leaving were loyal to her predecessor and resistant to Gardner's reforms.

“Some people want to go through it with me, and some do not,” she told the Post-Dispatch in 2017. “Most of those people who left, I’m not missing them.”

About 20 more prosecutors left last year. When the Riverfront Times interviewed Gardner last fall about continued staff departures, she brushed off criticism about poor communication and insisted she has an open-door policy with her staff.

"So I'm not going to say everybody left just because of me, because I think that's unfair to them as well as the office," she told the RFT.

So far this year, at least 13 prosecutors have left including former First Assistant Robert Steele, who now works under St. Louis County Prosecutor Wesley Bell. Five others have quit or have been fired in the past several weeks; another is heading to a U.S. attorney's office in Illinois.

It's not just trial attorneys leaving. Executive staffers have gone, too. Gardner's second chief of staff recently quit; she is on her second first assistant and her fourth chief trial assistant.

By comparison, St. Louis County Prosecutor Wesley Bell, whose office has a comparable number of attorneys, has lost seven prosecutors in his first nine months in office: three have resigned and Bell has tried to fire four, resulting in $170,000 in legal settlements for three of them. The key difference between the offices is that St. Louis County prosecutors have civil service protections, whereas city prosecutors can be fired at will.

Now, with less than a year before the 2020 Democratic primary in which Gardner is expected to face a challenge from former Assistant Circuit Attorney Mary Pat Carl, Gardner is refusing to discuss the turnover plaguing her office. Her spokeswoman, Susan Ryan, did not respond to requests from the Post-Dispatch for comment or to interview Gardner for this story.

In town hall gatherings, Gardner often talks of restoring trust in the community by repeating a mantra central to her reform agenda: “We cannot arrest or prosecute our way out of this situation."

She says her office's diversion programs have helped reduce crime and the jail city jail population and crime; she says she's proud of  holding police to account, prosecuting bad cops and scrutinizing evidence presented by police. At a July 18 public forum at St. Louis University, she said her office declined charges in 60 percent of the 5,000 cases brought by police between January and June because of insufficient evidence. In addition, she says her office is doing more community outreach and implementing diversion programs aimed at keeping people out of the system.

‘I’m not saying that we don’t have a crime problem in the city of St. Louis. But with these reforms," Gardner said, "crime is going down with the efforts of a public safety and harm-reduction model."

The average daily inmate count at the city's two jails has declined 29 percent decline since 2016, according to city data. Meanwhile, overall crime in St. Louis dropped about 5 percent between 2016 and 2018. This year's crime data through August is trending upward, with increases in all but one violent crime category since last year: homicide is up 16 percent; robbery is up 3 percent; shootings are up 6 percent. Rape is down nearly 20 percent.

The lobby wall just outside the Circuit Attorney's Office in the the city's Carnahan Courthouse features nine glass cases listing the names of hundreds of city prosecutors that have come and gone over the years.

The far-right box lists mostly people who left during Gardner's term. It's full of names, and hasn't been updated since June. 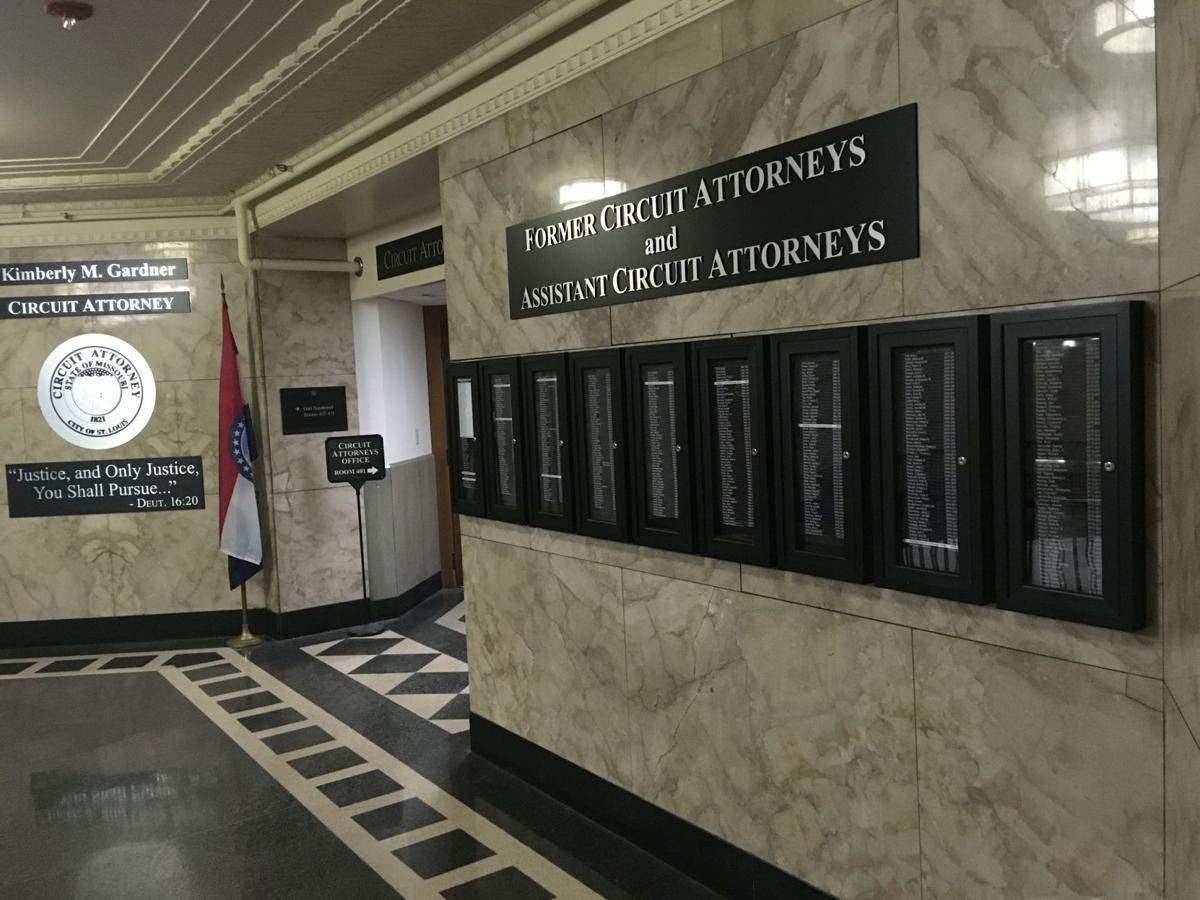 Glass cases outside the Circuit Attorney's Office on the fourth floor of the Carnahan Courthouse list the names of prosecutors who have previously served the office. Photo by Joel Currier, jcurrier@post-dispatch 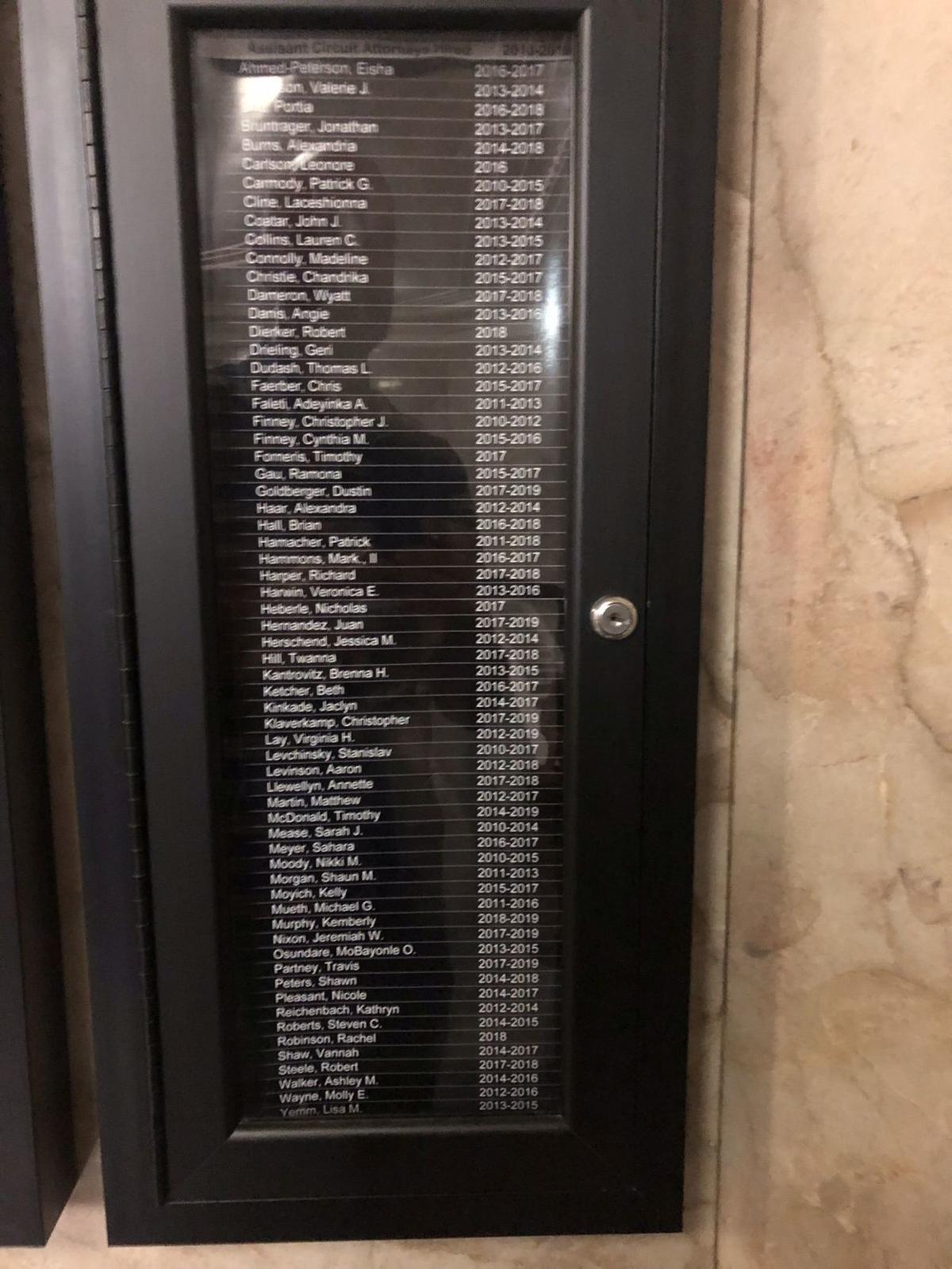 One of several glass cases outside the Circuit Attorney's Office on the fourth floor of the Carnahan Courthouse lists former prosecutors. The case pictured here primarily shows those who have left since 2017. Photo by Robert Patrick, rpatrick@post-dispatch.com