CLAYTON — After years of meeting resistance behind closed doors in attempts to encourage cooperation between the police departments of St. Louis and St. Louis County, a group of area business leaders has quietly made headway in recent weeks.

Under guidance from consultants working for Centene Corp. and other area companies, the departments have launched a program in which officers work together in the county police department’s 8th Precinct, in the city of Jennings, and the city police department’s 6th District, which includes most of the city’s northwest corner, including some or all of the 1st, 2nd, 22nd and 27th wards.

Several previous efforts to get the departments to work together quickly stalled. A county takeover of the city police proposed by former county Chief Jon Belmar in early 2019 got shaded out by the Better Together city-county merger debacle. A pitch from a Centene executive later last year, for the city to hire county officers to patrol MetroLink, became stuck in a political ice age between County Executive Sam Page and St. Louis Mayor Lyda Krewson.

This time, the group led by Centene CEO Michael Neidorff is operating through consultants working for Teneo, a New York- and London-based CEO advisory firm. In a roundtable discussion on Tuesday, Neidorff told a group of U.S. mayors and chief executive officers that if the St. Louis companies hadn’t become involved, it wouldn’t get done.

Centene, the Clayton-based managed health care giant, also has given about $200,000 to Page’s election campaign and a political action committee that supports him. The Democrat faces three challengers in the county executive race on Tuesday.

Page was the first to announce the privately funded review of the police department in late June, appearing to undermine the Board of Police Commissioners, which had just passed up his choice of a successor to Belmar, who took a job at Centene after he retired as chief. Days later, Krewson agreed to a parallel review in the city.

The county police board on July 9 voted 4-1 to give Teneo access to their department, although one commissioner was “outraged” and the chairman, William “Ray” Price Jr., said it wasn’t clear what was being “imposed” on the department. Tom Irwin, a Centene executive, said the consultants would meet with community stakeholders to write recommendations for how each department could improve.

Those recommendations have yet to be issued even though the departments appear to be implementing some of them. A representative for the group could not be reached on Tuesday.

The consultants, two former police chiefs from other U.S. cities, have worked directly with city and county police commanders to push for collaboration in high-crime neighborhoods of the city’s north side and in the city of Jennings, a county police precinct.

On Oct. 16, officers from the county’s Jennings Precinct and the city’s 6th police district held a joint roll call, a briefing in which supervisors hand out assignments and pertinent information to the oncoming shift. Jennings Mayor Yolanda Austin and Pam Boyd, the alderman for the city’s 27th Ward, attended.

Asked about the city-county effort, a spokesman for Krewson first downplayed it as little more than typical cooperation between neighboring jurisdictions.

After the newspaper asked more questions, St. Louis Public Safety Director Jimmie Edwards called to clarify that he had agreed to a 120-day pilot program in which the police precinct and district would work together.

He said the change came after “we had a couple meetings with business folks led by Michael Neidorff, about how we can do better with respect to criminals that are going back and forth from city to county, and collaborate more as a region.”

“I’ve never dealt with a consultant before, but if they’re looking at data and looking at heat maps, and if they suggest this is an area where a pilot (program) would certainly work” and they can collect data that proves it works, it will be a good thing, he said. He said the city and county officers would not patrol outside their jurisdictions, unless in hot pursuit.

Research crimes in St. Louis City and County with the crime tracker

In an online roundtable on Tuesday, Neidorff pointed to the city’s high rate of homicide and violent deaths of children, and noted the city and county police departments were separate. He said it was hard for firms to recruit job candidates when they come to town with their families and hear on TV that children are being murdered.

“We’ve been working with three or four other large companies … and we’re working with the police departments to determine how we can get the county and city, on a trial basis, working together in the highest crime areas, getting the chiefs working together, sharing criminal labs and starting to bring this under control.”

Neidorff added, “And so it’s been incumbent on myself and two or three other CEOs of large companies, Enterprise and others to try and get this organized. I think we’re making progress. Because we also realize, well, what we don’t do is not going to get done.”

Whether the final reports from Teneo will lead to recommendations to merge the departments, or some of their functions, is unknown — and county police commissioners are unclear about the consulting firm’s objectives.

Price, the police commission chairman, said he didn’t even know which companies were paying for the consulting. He said Teneo has “not given us a scope of work. I have never seen an outline or a piece of paper from them.”

Price said, “I think they are encouraging our operational people to work with and develop their own strategies and consulting with them on that.” But he said the consultants have “no ability to direct us to do anything.”

Price said the department was “relying on the generosity of many business people to provide their assistance to us and as long as it looks like we are making progress, I think we’ll cooperate.”

But he repeated that he would prefer to know exactly what they’re doing.

The Post-Dispatch also has requested information about Teneo’s work. A reporter on Oct. 7 asked Page’s office and the police department for any document, such as an agreement or scope of work, explaining what the consulting firm was doing. Each said they didn’t have any such documents. The newspaper sent the same request to Centene’s Irwin; he didn’t respond.

But the consultants also quietly have accessed the police board’s five members outside of any public forum. Price said the Teneo consultants have met individually with each commissioner “to determine what we as individuals felt we needed to be addressed.”

The Post-Dispatch on Tuesday filed a complaint with the state attorney general’s office about the meetings. The state Sunshine Law requires public bodies to include the public in meetings when there is a quorum. A state appeals court in 1996 found a board cannot hold separate meetings with small groups to avoid a quorum.

Doug Moore, a spokesman for Page, said the access granted by the county to Teneo was not related to Centene’s donations to support the county executive, but said, “Dr. Page looks forward to seeing the report.”

Jennings Mayor Yolanda Austin and eight council members said in a letter they should have been included in discussions about how their city is policed.

A police commander says the county police board approved the project, but the board never met or voted on it in public.

The prosecutors said they couldn’t imagine not being invited to a conversation about how laws are enforced to keep people safe.

But it was unclear how much the public would be able to glean from a public report promised for late December.

Council says it can reject a collective bargaining agreement. Four Democrats in the majority say they want greater public oversight of the department.

Second phase of Centene campus expansion, which called for third Clayton office tower, on hold due to crime

Clayton Mayor Michelle Harris said Centene officials told her that the company is "very concerned" about crime and has put investments here on hold.

The 120-day trial resulted in a 29% dip in overall crime, though violent crime rose slightly compared with 2019.

Business-funded study will mirror one underway in St. Louis County. 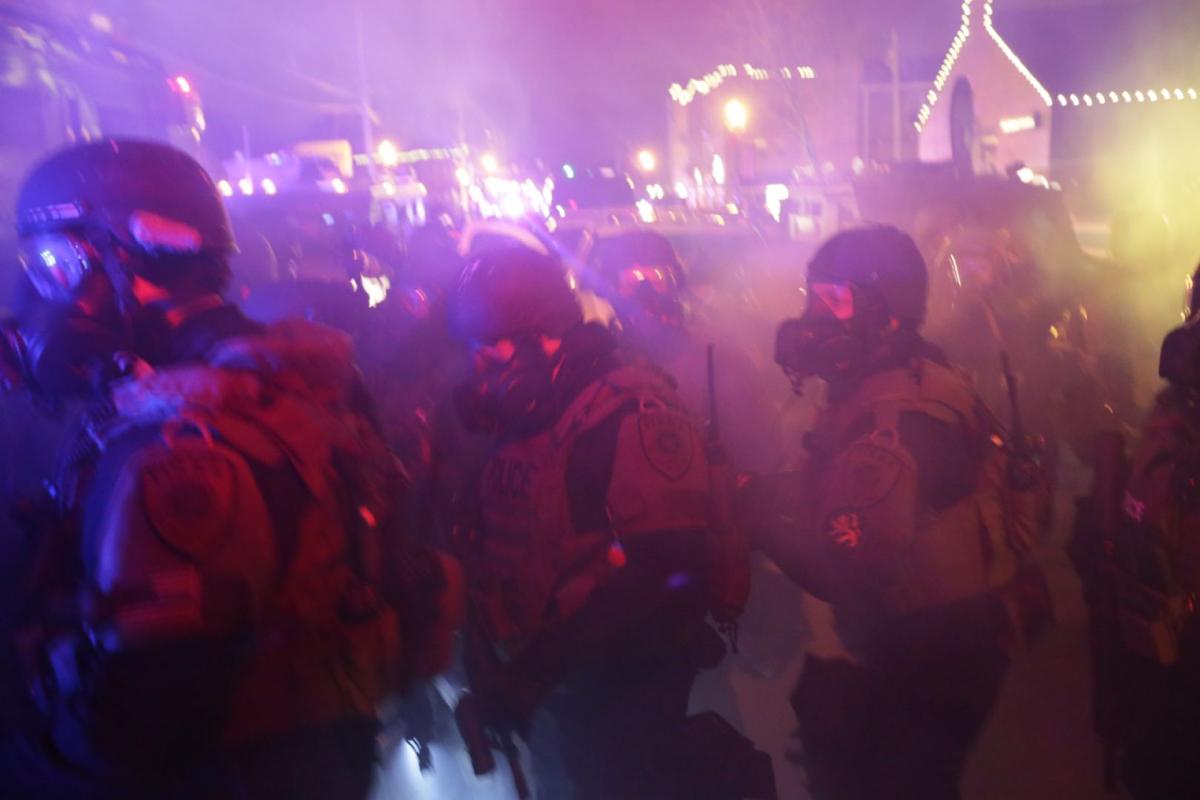 St. Louis County Police tactical team members take shelter behind their armored truck after they fired tear gas on South Florissant Avenue while responding to a large crowd outside the Ferguson police station on Monday, Nov. 24, 2014. Rocks and bottles were thrown and gun shots were fired from the crowd. (David Carson, dcarson@post-dispatch.com) 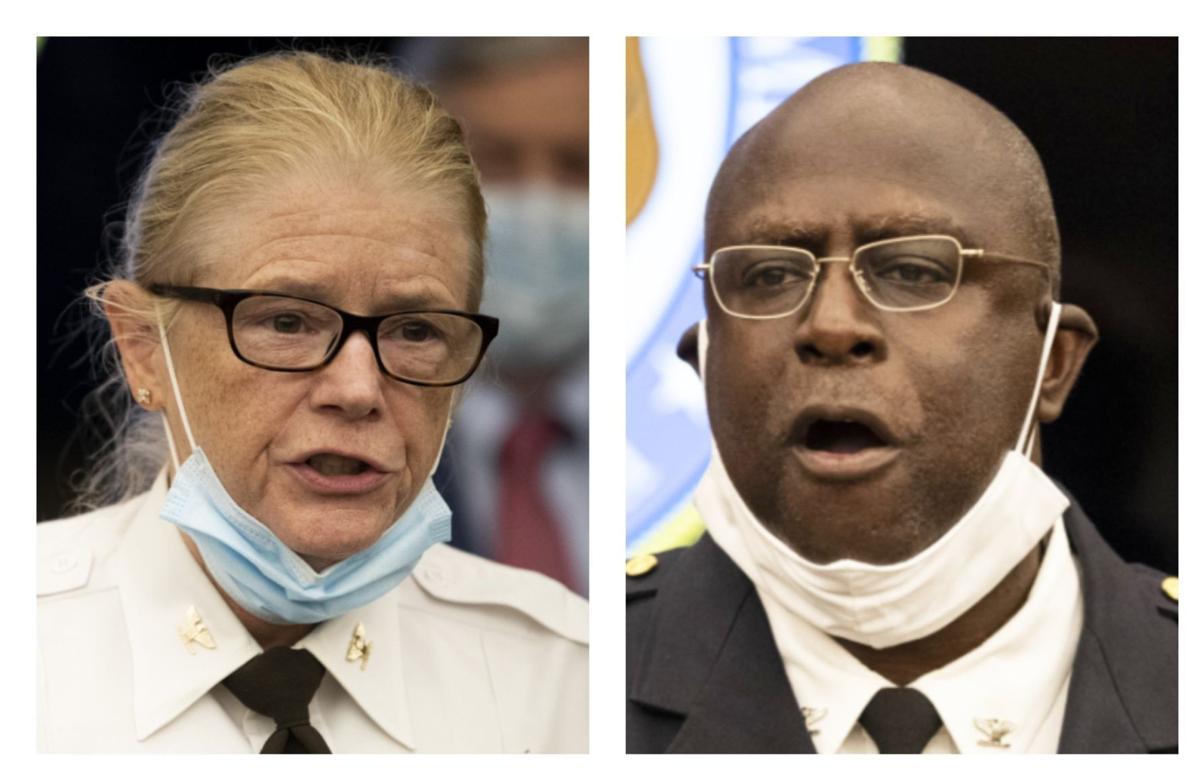 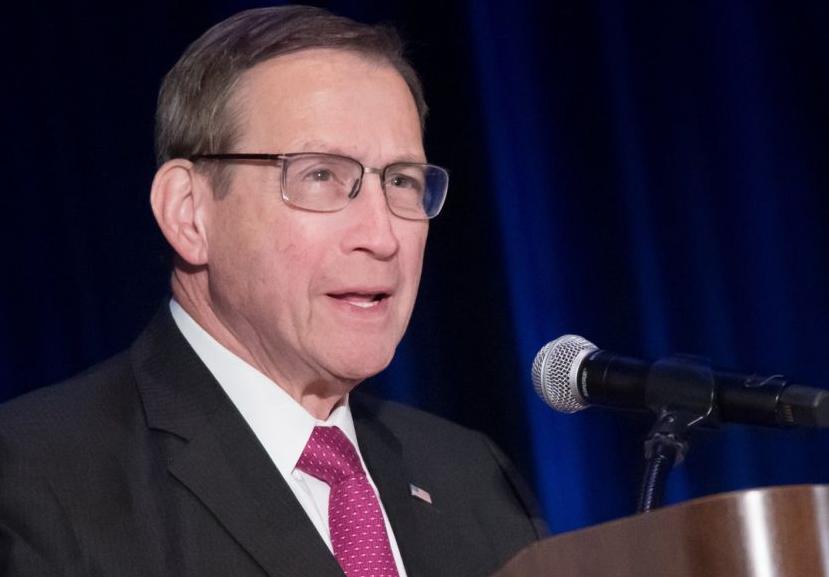