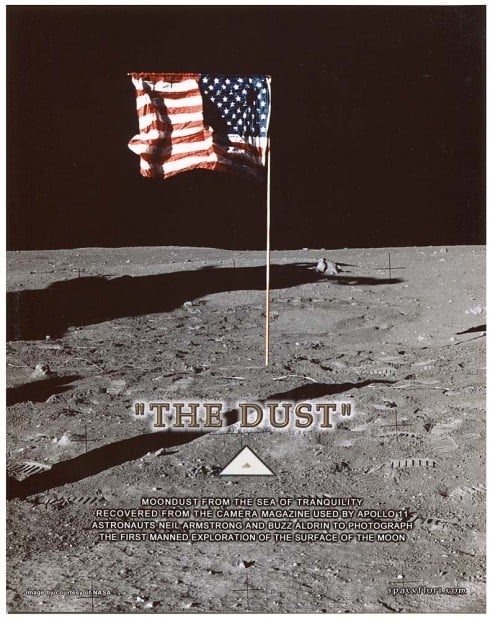 The presentation folder containing the lunar dust on a 8"x10" color photo. 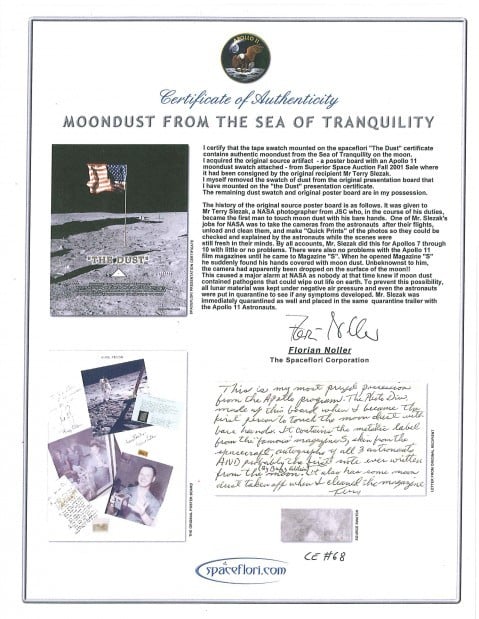 Certificate of authenticity with history of lunar dust.

ST. LOUIS • Moon dust stolen decades ago from the National Aeronautics and Space Administration has been recovered just before a planned auction in St. Louis, the U.S. attorney's office said Thursday.

The dust came from the film canister used by astronauts on the Apollo 11 mission and was believed to have been transferred to a one-inch piece of tape and then stolen by a NASA employee, they said.

"It wasn't much to look at, but I will never be that close to the moon again!" said U.S. Attorney Richard Callahan in a statement released Thursday announcing the recovery.

Investigators believe that the tape was sold in 2001 to a German collector of " space-related memorabilia," but lost the trail until Callahan's office heard early this month that it was to be sold by the St. Louis office of Regency-Superior Auctions.

The seller, whose name has not been revealed, turned over the dust after learning of its history. Her late husband was the one who bought or otherwise obtained the dust, Callahan's office said.

Full test results that would confirm the material as being from the moon are still weeks away, but preliminary testing at the Johnson Space Center laboratory late Wednesday "confirmed that the material is in all likelihood lunar."

There is some dispute over whether the dust was stolen or given to the NASA employee. In the auction materials, that employee, Terry Slezak, says that he was given the dust as a gift - to commemorate Slezak as the first person to touch moon dust with bare hands. Slezak got dusty when he was unloading a camera that had been dropped on the moon by astronaut Neil Armstrong.

He bought space rock, found out it had been taken from New Mexico museum.

Missouri can't find moon rock given to state as gift

COLUMBIA, MO. • A "goodwill" moon rock given to Missouri nearly 40 years ago is missing.

Moon rock? Oh yes, there it is amid the 'clutter'

Whether you call it lost in a box or an "archive," Missouri's lunar rock is back.

Moon is wetter than believed

LOS ANGELES — The moon is much wetter and more chemically complicated than scientists had believed, according to data released Thursday by NASA.

The presentation folder containing the lunar dust on a 8"x10" color photo.

Certificate of authenticity with history of lunar dust.