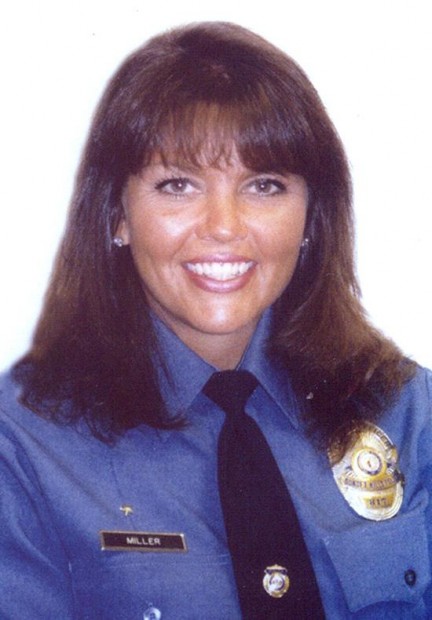 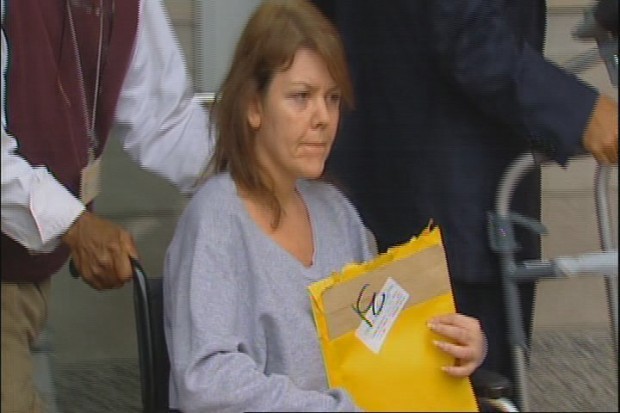 Sunset Hills police officer Christine Miller is wheeled from the St. Louis County Justice Center after being booked in 2009. Photo courtesy of KMOV 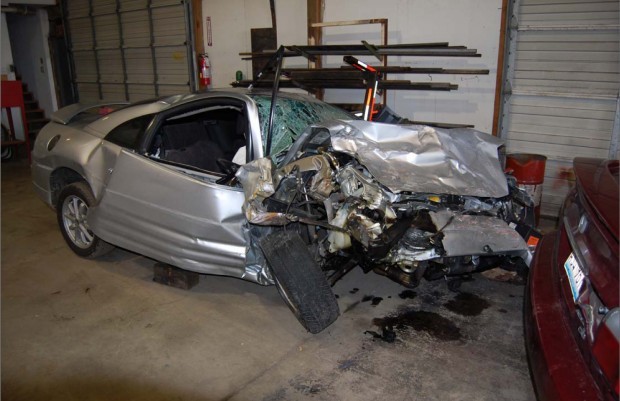 CLAYTON • Christine Miller always planned to accept responsibility for killing four people in a 2009 drunken-driving crash, her lawyer said. On Thursday afternoon, the suspended Sunset Hills police officer did it.

In a soft voice, Miller, 42, pleaded guilty on four counts of involuntary manslaughter, plus one count of second-degree assault for a fifth victim who was severely hurt but did not die.

St. Louis County Circuit Court Judge Michael T. Jamison set sentencing for March 10, when his options will range from probation to 67 years in prison. He did not comment in court on the crime or the proper punishment.

In court, Key illustrated the depth of Miller's recklessness with reference to a receipt in her purse for five cosmopolitans the night of the crash. He said her blood alcohol level was about 0.2 when taken 45 minutes after the crash. (Court records say 0.229, almost three times the legal limit of 0.08.)

When the charges were filed, officials had cited a lower number, 0.169, from a test about three hours after the collision.

The plea came without any concessions from the prosecution, which defense lawyer Scott Rosenblum said was "the best route to go" in this case.

"This is something that has been in the works for a while," he said in an interview. "Miss Miller, obviously, from the beginning, wanted to accept her responsibility."

He noted, "An independent, fair-minded judge ... is in the best position to render the appropriate sentence."

Miller had been off-duty, drinking at O'Leary's Restaurant & Bar, about 1,000 feet from the Sunset Hills police station, just before the early morning crash on March 21, 2009. She was driving her own car the wrong way on Dougherty Ferry Road at Des Peres Road, in Des Peres, when she caused the collision.

Anusha Anumolu, 23, Anita Lakshmi Veerapaneni, 23, and Priya Muppavarapu, 22, all of Charleston, Ill., and Satya Subhakar Chinta, 25, of Aurora, Ill., were killed. Nitesh Adusumilli, 27, of Ballwin, the driver of the car in which they rode, was badly hurt.

The four passengers were natives of India who had studied and worked in the U.S. for several years.

Miller, in a black jacket and pants with her hair pulled back in a loose ponytail, appeared healthy in court Thursday. But Rosenblum said after the hearing that she suffers 'significant neurological issues" and does not remember the wreck.

"The fact that she's up and walking again is a miracle in itself," the lawyer said, noting that she was almost given up for dead at the hospital.

"She lives with this event each and every day," he said. "When you have no specific memory of what that tragedy is, that is a terrible, terrible thing."

About a half-dozen people attended the hearing to support her. They and Rosenblum ushered Miller out of the courthouse in Clayton immediately after the hearing, managing to elude reporters and photographers waiting outside.

Miller has been on unpaid suspension from the Sunset Hills police, and released to home confinement with an ankle monitor while convalescing. City Attorney Bob Jones Sr. said Thursday that her employment status may be discussed by aldermen at a meeting Tuesday.

Earlier this year, Miller and the bar that served her agreed to pay a total of $2.255 million, the limit of their insurance policies, to compensate the injured man and the dead victims' families in India.

Sharath Rao and Suren Pathuri, representatives of the Telugu Association of St. Louis, attended the hearing. Telugu is a language found mostly in an eastern state of India, where the victims once lived.

The families had been told in advance about the hearing and were generally pleased that Miller was going to take responsibility, Rao and Pathuri said.

Rao traveled to India several months ago to meet with the relatives and present them with money the public had donated to help ship the bodies back there. After those expenses were met, he was still able to give each family about $7,500, he said.

"American dreams are shattered, you know?"

She remains suspended without pay.

She had been on unpaid suspension while recovering from her own injuries.

Officer killed four in 2009 drunken-driving collision; "it seems to me she got four free felonies," McCulloch says.

“Is it because we are foreigners?’ mother of DWI car crash victim asks.

CLAYTON • A Sunset Hills police officer and the bar that served her alcohol have agreed to pay a total of $2.255 million — the limit of their …

A Sunset Hills Police officer was charged last week in connection with a March 21 crash that killed four people and injured another in Des Peres.

Officer's son was in a fatal car crash

As authorities weigh criminal charges against a Sunset Hills police officer whose wrong-way crash killed four people on Saturday, it turns out…

Survivor of crash shielded from news

DES PERES • They were returning home after a night out of dinner and bowling - five Indian twenty-somethings having fun in All-American fashion.

DES PERES • In his profile on an Indian matchmaking website, Nitesh Adusumilli wrote that he lives with passion and fervor, optimistic about b…

Sunset Hills police officer Christine Miller is wheeled from the St. Louis County Justice Center after being booked in 2009. Photo courtesy of KMOV

This is the red 1997 Honda Accord EX four-door sedan that Christine Miller, 41, a Sunset Hills police officer hit on March 21, 2009.
© Copyright 2021 STLtoday.com, 901 N. 10th St. St. Louis, MO | Terms of Use | Privacy Policy
Powered by BLOX Content Management System from TownNews.com.
You don't have any notifications.