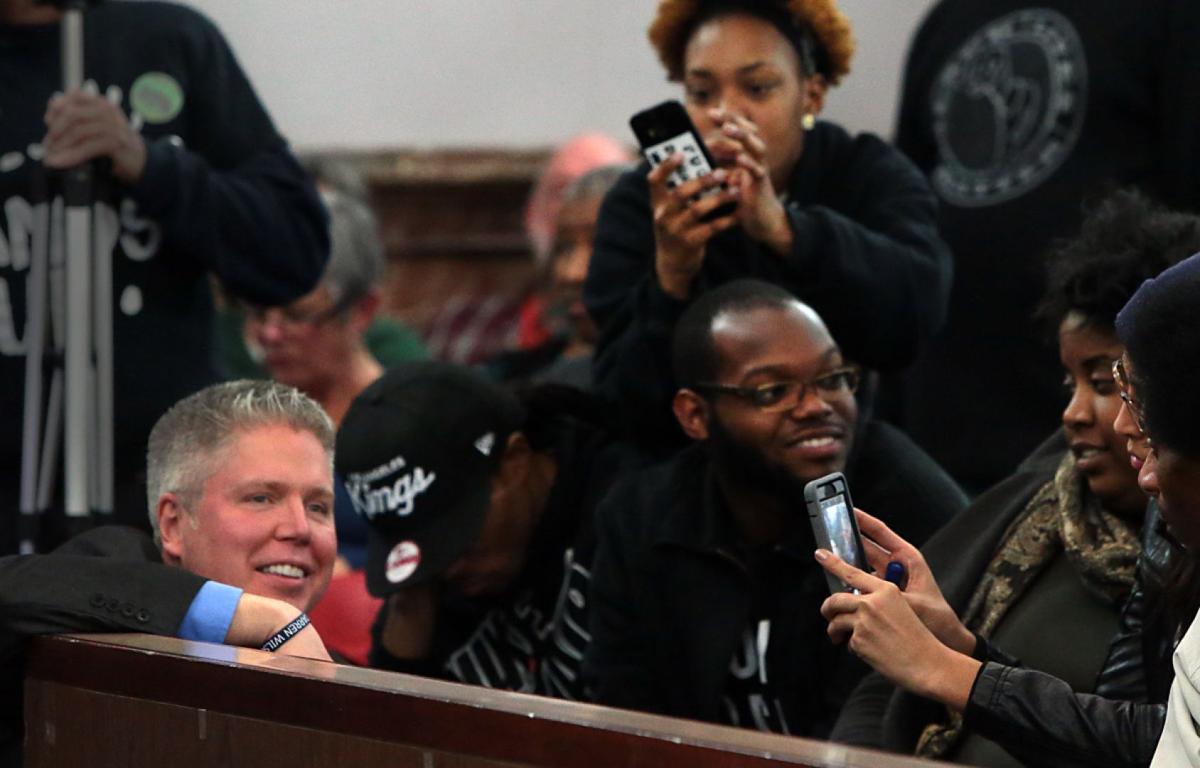 Protesters photograph Jeff Roorda, business manager of the St. Louis Police Officers Association, as he wears a bracelet that says "I am Darren Wilson" at a meeting of a proposed civilian oversight review board at City Hall on Wednesday, Jan. 28, 2015. Photo by Robert Cohen, rcohen@post-dispatch.com 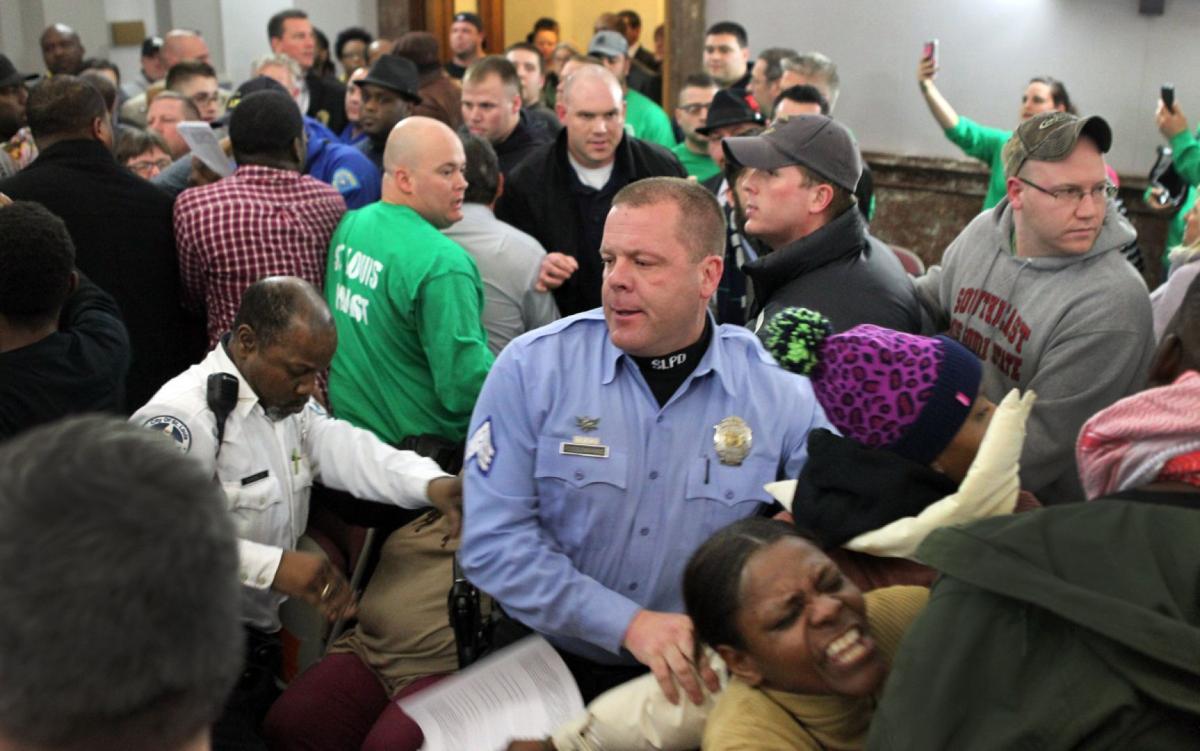 Wanda Brandon cries out as St. Louis Police Sgt. Brian Rossomanno moves people out of the way as a meeting of a proposed civilian oversight review board got out of control at City Hall on Wednesday, Jan. 28, 2015. Photo by Robert Cohen, rcohen@post-dispatch.com 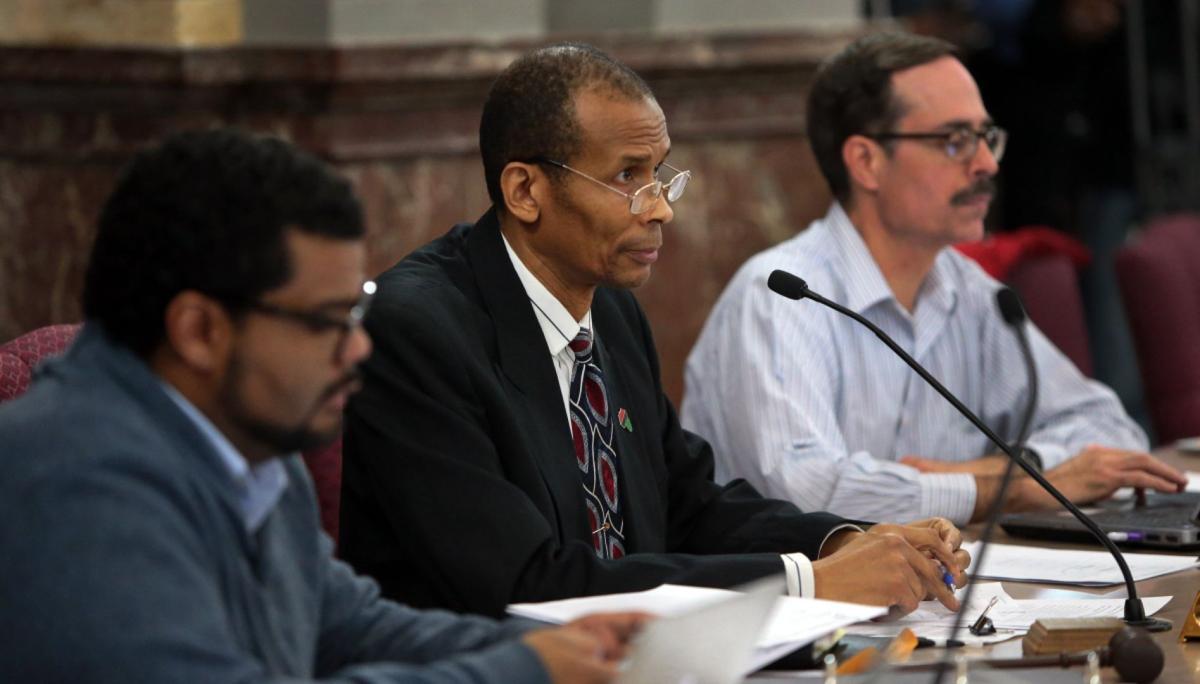 ST. LOUIS • A bill to create a civilian oversight board for city police appears headed for passage next month, despite a fractious public meeting and a dire prediction from the police union.

A majority of the Board of Aldermen have already affixed their names as co-sponsors of the bill, which would create a seven-member civilian board to investigate police misconduct allegations. Mayor Francis Slay has even taken an unusual step of adding his name to the bill as a sign of support.

But the city’s police officers union has begun hitting back.

Jeff Roorda, a police union official, said on Thursday that St. Louis police officers will quit the department or do only the bare minimum on patrol if the city creates the kind of civilian oversight board currently being proposed.

“They’d answer their calls when they got them, but as far as interrupting criminal behavior on their own, why in the world would they do that when their employers aren’t even supporting them?” Roorda said.

“They would be incredibly reluctant to do their jobs,” he said, “and St. Louis would be a much more dangerous place than it is now. Nobody wants to be the next Darren Wilson.”

Wilson is the Ferguson police officer who fatally shot Michael Brown, 18, after a confrontation last August.

The union has enlisted Lou Hamilton, a seasoned lobbyist with deep knowledge of City Hall, to help fight or change the current bill.

Alderman Terry Kennedy, who heads the city’s public safety committee, is a champion of the bill. He said he hasn’t set a date for a committee vote, which would have to take place before it moves to the full Board of Aldermen. Kennedy says he expects that to happen next month.

“The bill does not restrict officers from doing their jobs,” Kennedy said Thursday. “It enhances their ability to interface with the community because it gives a third party in residents the ability to look at complaints.”

Slay echoed those claims on Thursday, writing on Twitter: “The city will soon have civilian oversight board. It will do an important job fairly. Opponents who view a bill supported by a majority of aldermen (and me) as too strict or too lax misunderstand compromise.”

The debate comes at a crucial time as the city faces a spike in violent crime and a 40 percent drop in arrests since the unrest in Ferguson.

St. Louis is one of the few major cities in the nation without some form of an oversight board. Both Kansas City and Columbia, Mo., have civilian boards. Slay vetoed a bill that passed the Board of Aldermen in 2006, saying it had “inflammatory anti-police” wording.

Under the current measure, the St. Louis Civilian Oversight Board would have the authority to investigate allegations of police misconduct; research and assess police policies, operations and procedures; and make findings and recommendations. It would also be able to independently review evidence and witness statements from investigations by police internal affairs. The board would report its findings to the city’s public safety director and police chief.

The board members would be nominated by the mayor and approved by the Board of Aldermen. They would not be paid. Nominees would have to be city residents. They couldn’t hold public office or be related to employees of the police department. Each member would have a specific district that spans several city wards.

At a public hearing on the measure Wednesday night, officers testified that they wanted more stringent background checks, education requirements and a clause mandating drug testing of board members.

Roorda sparked ire when he showed up at the aldermanic committee meeting wearing a bracelet showing support for Wilson. He was seen on video in an altercation with a woman at the meeting after it erupted into a shoving match. Roorda had called on Kennedy to restore order as protesters shouted at officers attempting to testify.

“We ask that anyone with information or video of the matter, come forward to police,” Trager said.

Roorda said he was nearly knocked down as he tried to reach the podium to talk to Kennedy.

“As I tried to make my way up to the podium, several protesters blocked my path,” he said. “The woman started stomping my feet and kicking my shins. I pushed back. The crowd just surged at me. I was just trying to stay on my feet.”

He said he was considering filing an assault report against the woman Thursday.

Roorda also defended his right to wear an “I Am Darren Wilson” bracelet as an expression of free speech and said he didn’t realize it would upset people.

“There were people wearing ‘Hands up, Don’t shoot’ T-shirts, perpetuating this myth, yet no one complained about that very visible expression,” Roorda said.

“They’re wrong about what happened, but they have a right to wear that shirt.”

Roorda continued to be a controversial target of protesters on Thursday.

“The existence of tension, and especially Jeff Roorda’s outrageous behavior, shows all the more clearly the need for civilian oversight,” said Jamala Rogers, the chair of the Coalition Against Police Crimes and Repression. “Watching Roorda’s actions and those of some members of the St. Louis Police Officers Association only gave more reasons why citizens are distrustful of the police.”

Roorda said a meeting such as Wednesday night’s session isn’t the way to heal this region.

“The police are not the problem here. Police are shooting back when people try to kill them,” he said. “The problem is people are trying to kill police. Young black men have such a hopeless life they think turning to that kind of violence is a rational decision.”

• Comprised of seven residents appointed by mayor and approved by board of aldermen.

• Members must be 18 and a resident of St. Louis. They can't hold elected office, have an immediate family member employed by police department, or have a felony conviction.

• Members would come from sevent districts comprised of four wards each.

• Police officers would be required to be interviewed by the board if they are the subject of a complaint.

McClellan: St. Louis is back in the spotlight

Police stop man for walking in a Jennings street, then situation escalates.

Last time, a melee broke out.

The bill now moves to vote before full board.

St. Louis Board of Aldermen to vote on civilian oversight of police

No showdown yet on police oversight bill in St. Louis as it inches forward

The next vote on the controversial civilian oversight of police bill is expected on Monday.

Public hearing on civilian review board for St. Louis police erupts in chaos

Crowd became unsettled when police officers began testifying in opposition to the bill.

St. Louis aldermen to hold hearing on civilian oversight board of police department

Bill promises to be controversial at City Hall

Bill would create civilian oversight board of St. Louis police

The St. Louis Civilian Oversight Board would have the authority to investigate allegations of police misconduct

Protesters photograph Jeff Roorda, business manager of the St. Louis Police Officers Association, as he wears a bracelet that says "I am Darren Wilson" at a meeting of a proposed civilian oversight review board at City Hall on Wednesday, Jan. 28, 2015. Photo by Robert Cohen, rcohen@post-dispatch.com

Wanda Brandon cries out as St. Louis Police Sgt. Brian Rossomanno moves people out of the way as a meeting of a proposed civilian oversight review board got out of control at City Hall on Wednesday, Jan. 28, 2015. Photo by Robert Cohen, rcohen@post-dispatch.com