Suspect charged with setting two in the string of seven St. Louis area church fires
0 comments
Share this
{{featured_button_text}}
1 of 4 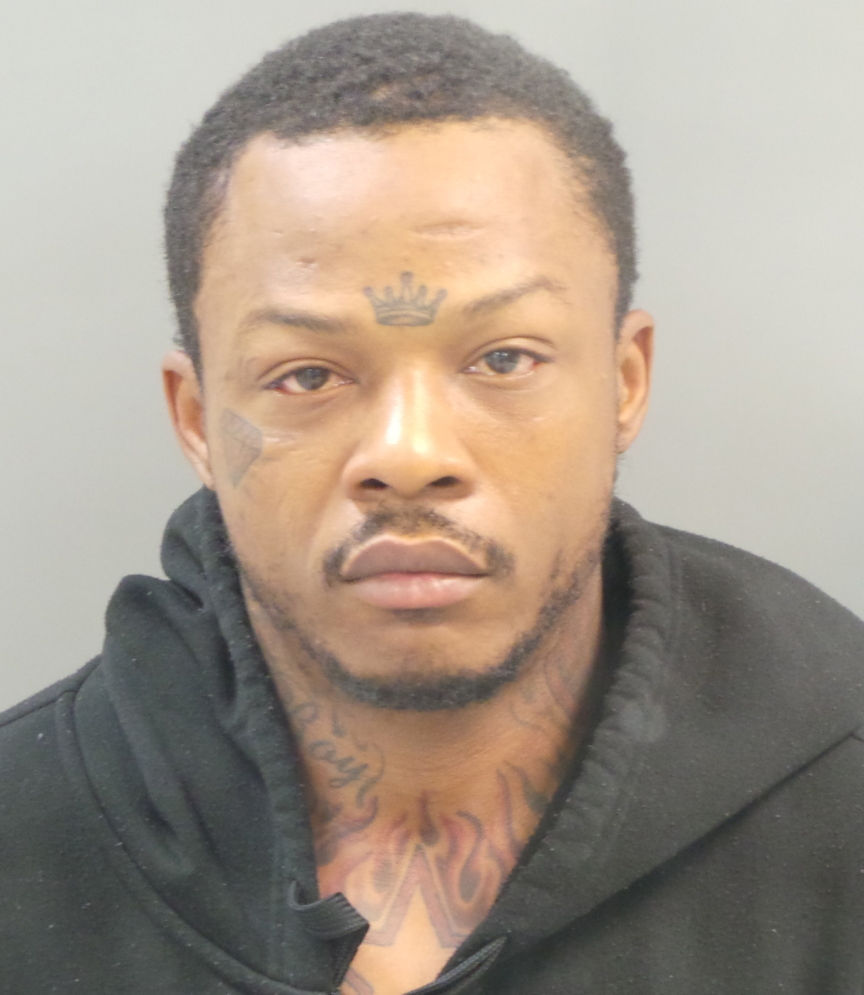 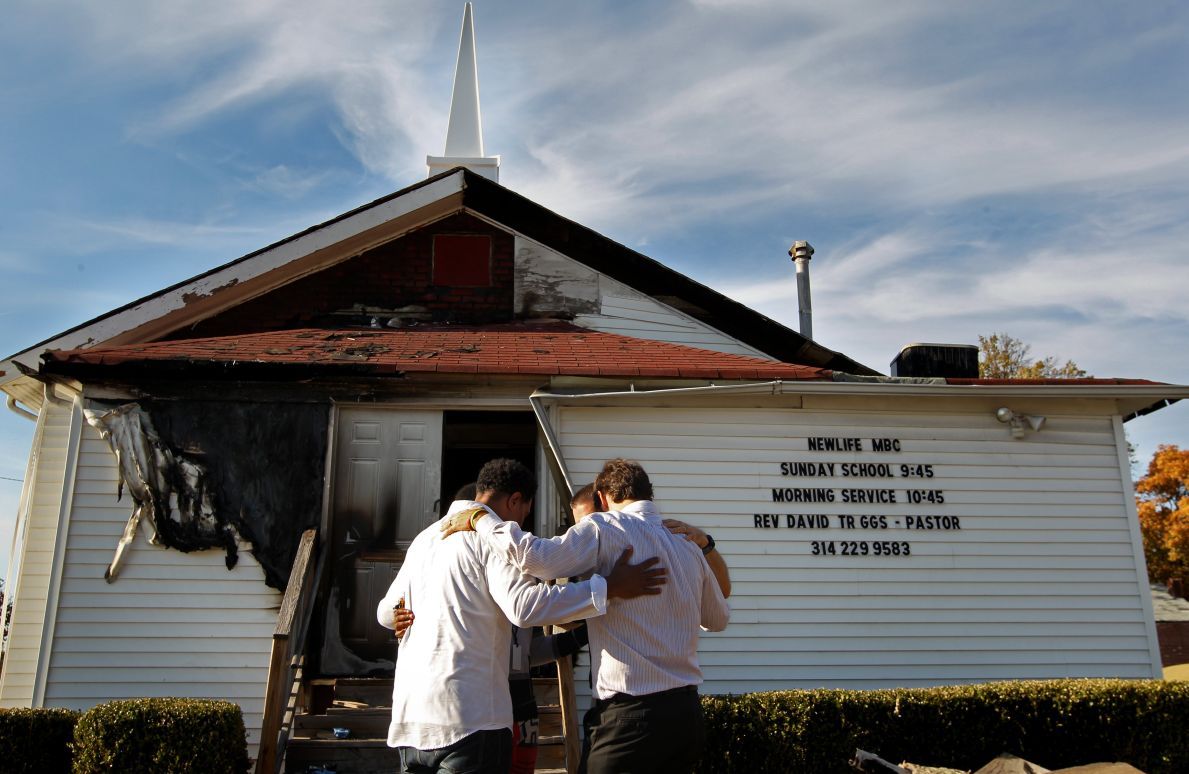 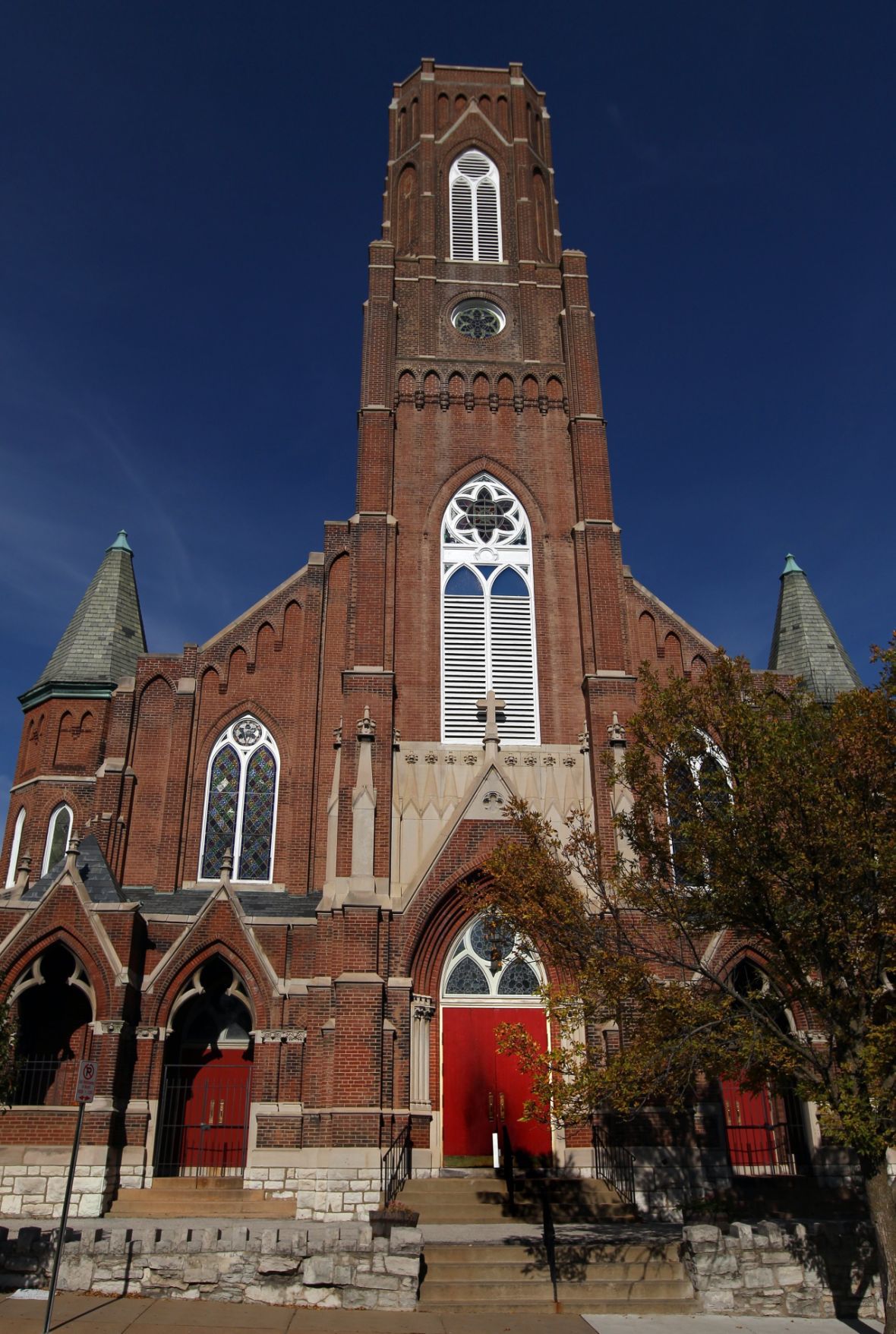 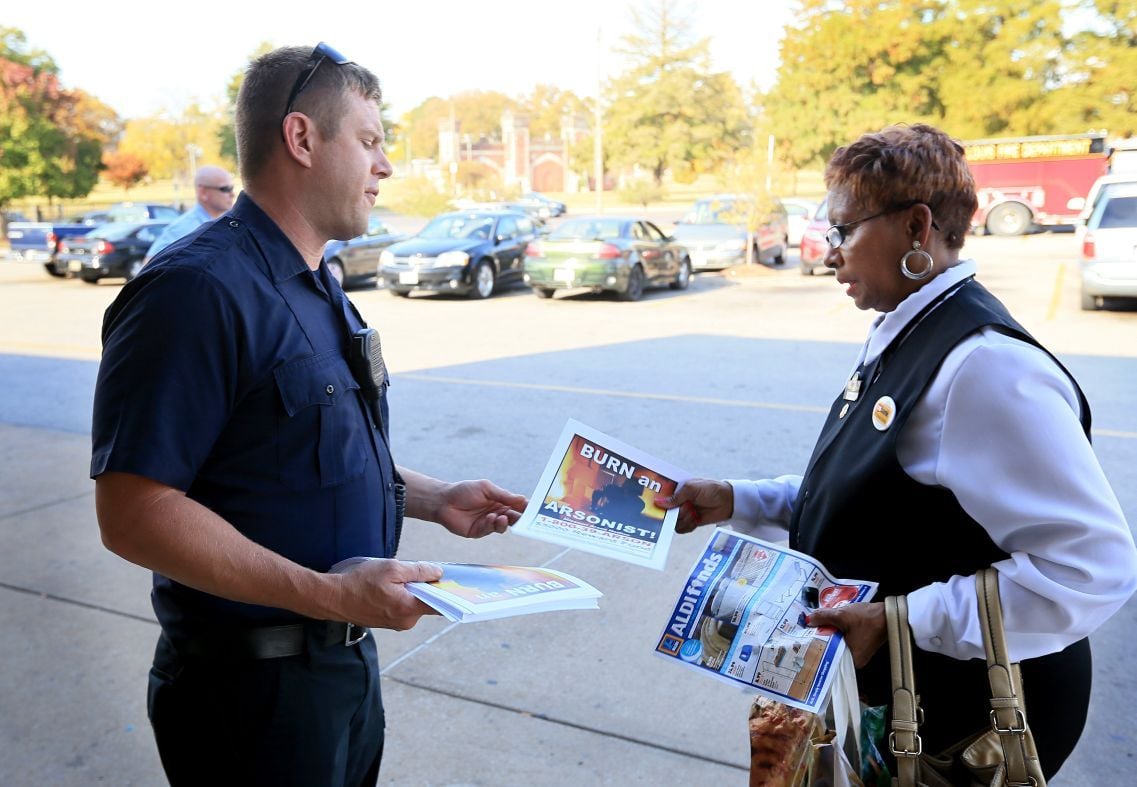 Firefighter Brian Meyer hands a flyer to Loretta Mansfield Jones on Thursday, Oct. 22, 2015 at North Grand Boulevard and Natural Bridge Avenue in St. Louis as he and other firefighters canvassed parts of the city trying to stir up leads to help catch an arsonist who has been setting fire to church doors. Early Thursday morning an arsonist set fire to the doors on the rectory on the Shrine of St. Joseph in St. Louis. Photo By David Carson, dcarson@post-dispatch.com

The charges, two counts of second-degree arson, list his address as in the 200 block of Presley Road in the Glasgow Village area of unincorporated St. Louis County. He was being held in lieu of $75,000 bail, according to court documents.

Forensic evidence linked him to the fire on Oct. 18 at Ebenezer Lutheran Church, 1011 Theobald Street; and video of his car near New Life Missionary Baptist Church, 4569 Plover Avenue, links him to the fire there on Oct. 17, police Chief Sam Dotson said. Both churches are in the city.

A container of gasoline and a Thermos bottle that smelled of gasoline were found in his car, Dotson said.

Asked about a motive, Dotson said, “We’re still trying to understand that.”

Dotson did not specifically accuse Jackson of the other church fires but said he was a suspect and suggested that further investigation might result in additional charges for additional crimes.

Although the locations of the fires in predominantly African-American neighborhoods gave rise to speculation that the motive might be race-related, Jackson is black.

He also is reported to be suspected of trying to burn a relative’s home in the 5300 block of Wilborn Drive in Jennings, a source said. Police responded to a call for an attempted arson there shortly after 4 p.m. Thursday. St. Louis County police responded to the same location for a report of a “suspicious odor” on Oct. 24.

The Jennings address, which is listed as Jackson’s home in some court records and is where he was arrested, is in the area of the first six fires — about two blocks from the closest.

Jackson’s criminal record dates to 1998, when he was arrested and charged with unlawful use of a weapon. He has also been charged with domestic assault, burglary, drug-related crimes, resisting arrest and assaulting a police officer.

Court records indicate that he was ordered to undergo a mental health evaluation, and an order of protection was sought against him to stay out of the city’s Wells Goodfellow neighborhood in 2009.

In August 2014, Jackson admitted to kicking in the back door of a home in the 5200 block of Hamilton Avenue and stealing two lanterns, according to court documents.

He most recently pleaded guilty in January of first-degree property damage and assaulting a police officer in St. Louis stemming from an incident in October 2014. Jackson admitted breaking multiple windows at the Crocodile Lounge by throwing rocks at them, according to court documents. Judge Edward Sweeney sentenced him to 120 days of “shock time” in jail, which he served from March through June, to be followed by four years of supervised probation.

Police said Jackson had become a suspect before the seventh fire, in downtown St. Louis, miles from the others, given his criminal record and proximity to most of the fire scenes.

The string of fires, many of which did minimal damage, drew attention of local and federal investigators.

The Rev. Robert Gettinger, of St. Augustine Catholic Church, 1371 Hamilton Avenue, said news of an arrest was a relief.

“We pray for the person who has done this. It seems to be mentally off-balance behavior,” Gettinger said.

The Rev. Roderick K. Burton, of New Northside Missionary Baptist Church, 8645 Goodfellow Boulevard in Jennings, said the congregation was waiting to repair its doors after the Oct. 10 fire until a suspect was in custody. Church members did not want the community to forget that an arsonist was on the loose, he said.

On a message board on the front lawn of the church, scripture often is quoted. Burton decided the message on the board should be “church fires must stop” after New Northside was struck Oct. 10.

“I’m looking forward to changing the sign to ‘church fires have stopped,’ ” Burton said. He said he was always confident the culprit would be caught.

“I feel like it’s an answer to prayer. The whole metropolitan area can breathe a sigh of relief. We’re very thankful that the fires didn’t hurt anyone physically. Everyone will be very interested in finding out the motivation.”

Gettinger, at St. Augustine, said the church remained grateful that damage was isolated to the front doors, the ignition point in all the fires. St. Augustine has not received bids, but damage is easily in the thousands of dollars, he said.

“These are substantially big doors, about 15 feet high, at least 3 inches thick, original to the church, which is about 100 years old,” Gettinger said.

St. Augustine was damaged Oct. 14, the third church targeted by arson. The other fires happened Oct. 8 at the Bethel Nondenominational Church, 6380 Lillian Avenue in Jennings; Oct. 15 at the New Testament Church of Christ, 5740 Minerva Avenue in St. Louis; and Oct. 22 at the Shrine of St. Joseph, 1220 North 11th Street.

The final fire, at the historic shrine downtown, appeared to break the arsonist’s geographical pattern.

The variety of denominations and types of structures targeted included Catholic, Lutheran, Baptist and nondenominational congregations — four on the north side of St. Louis and two in Jennings. They ranged from the relatively grandiose historic brick structures of St. Augustine Catholic Church and Ebenezer Lutheran Church to the modest storefront used by the New Testament Church of Christ.

The first six churches were within about five miles of each other, and sustained varying levels of damage from fires set at their front doors from Oct. 8 to 18. Mainly, the damage was contained. Police presumed they were the work of the same person or people.

The fires were small blazes set against the exterior doors, but in some cases spread.

Various organizations including the St. Louis Police Officers’ Association, the state fire marshal’s office, the St. Louis Regional CrimeStoppers and the federal Bureau of Alcohol, Tobacco, Firearms and Explosives contributed to a reward fund that topped $9,000 for information leading to an arrest.

The investigation included members of the St. Louis police and fire departments and federal agents.

Four churches in Crestwood and south St. Louis County were broken into from Nov. 24 to 28.

"The City of St. Louis and its faith community are resilient," Slay said after the meeting.

The latest case was at the Shrine of St. Joseph, at the northern edge of downtown.

Firefighter Brian Meyer hands a flyer to Loretta Mansfield Jones on Thursday, Oct. 22, 2015 at North Grand Boulevard and Natural Bridge Avenue in St. Louis as he and other firefighters canvassed parts of the city trying to stir up leads to help catch an arsonist who has been setting fire to church doors. Early Thursday morning an arsonist set fire to the doors on the rectory on the Shrine of St. Joseph in St. Louis. Photo By David Carson, dcarson@post-dispatch.com