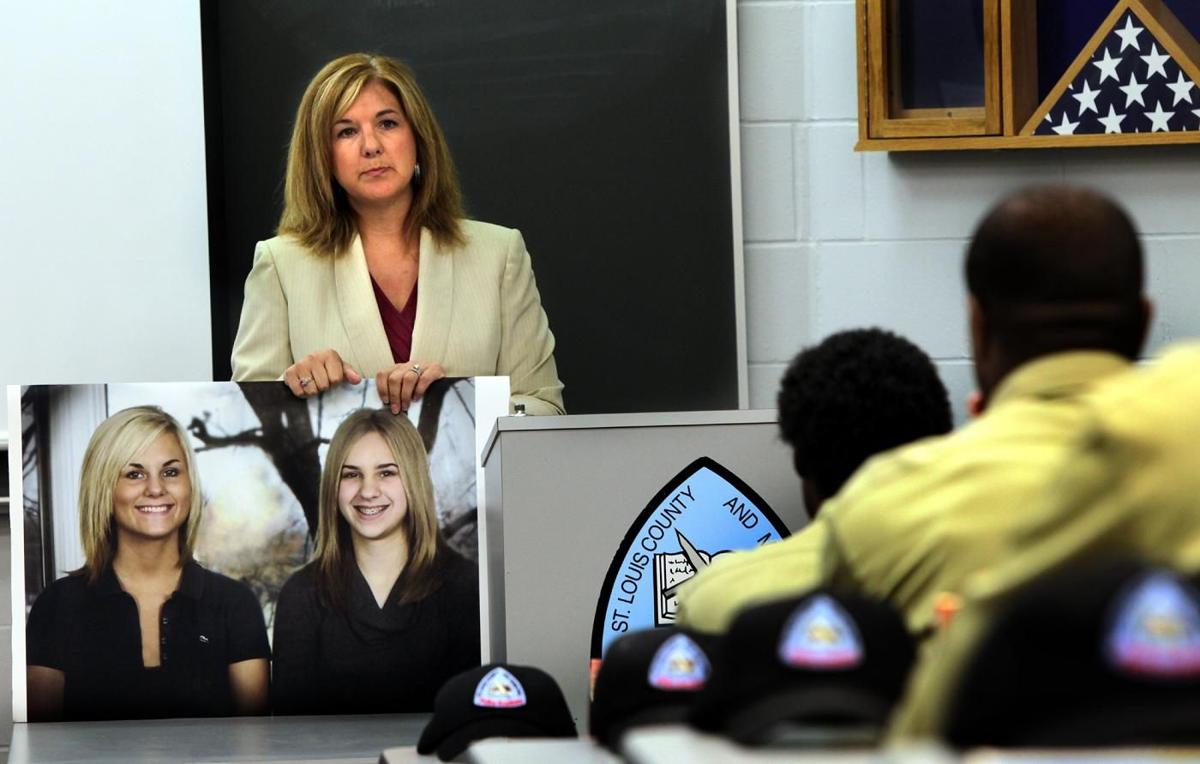 Kimberly Schlau displays a photograph of her daughters, Jessica and Kellie Uhl, while speaking to recruits at the St. Louis County Police Academy on June 11, 2010. (Robert Cohen / rcohen@post-dispatch.com) 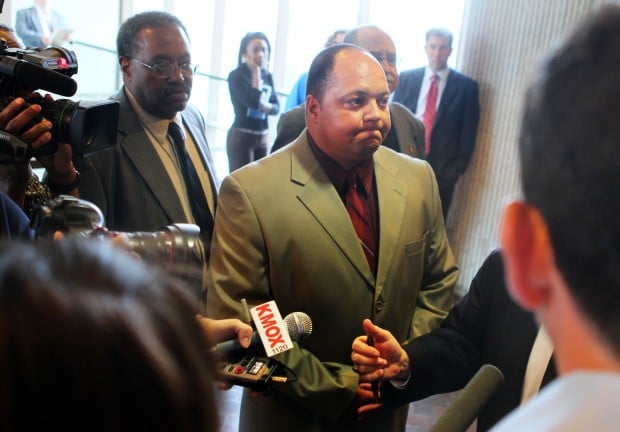 Matt Mitchell pauses in front of the elevator at in the St. Clair County Building on April 6, 2010, as his defense attorney, John O'Gara, talks to the media. Photo by Emily Rasinski, erasinski@post-dispatch.com

SPRINGFIELD • The Illinois Court of Claims awarded $8 million in damages today to the parents of two Collinsville teens killed by a state trooper who crashed his squad car at 126 mph while e-mailing and talking on his cell phone.

Brian Uhl and Kimberly Schlau, the parents of Jessica Uhl, 18, and Kelli Uhl, 13, had sought damages in excess of $24 million from former state trooper Matt Mitchell and the state, and later increased it to $46 million. Still, the $8 million award is considered large.

"To my knowledge, this is the largest tort claim ever awarded (against the state)," said Michael Mathis, a lawyer for the Illinois Court of Claims.

Schlau said at a press conference today that the award won't make her family whole. But, she said she hopes it will deter negligent behavior in the future.

"We are hopeful this ruling has an impact," Schlau said.

Schlau said the money will help the family fund scholarships in the girls' names.

Mitchell lost control of his police car on Interstate 64 near Fairview Heights while driving 126 mph in response to an emergency that was already being handled by other agencies. In the moments before the November 2007 crash, Mitchell had been talking on his cell phone to his girlfriend and e-mailing another trooper.

Larry Trent, the former director of the state police, testified that Mitchell's actions were "indefensible."

The Uhl sisters were headed home from a post-Thanksgiving photo shoot when their car was struck by Mitchell's marked Chevrolet and was engulfed in a raging fire. The teens died at the scene. Two others in another vehicle were injured.

Mitchell resigned from his job last year, after he pleaded guilty of two counts of reckless homicide in a deal for 30 months on probation.

Now, the monetary award must be rolled into a special bill and approved by the Illinois Legislature. Such bills are usually approved toward the end of April.

Mitchell was in two previous crashes: A single-vehicle crash in 2002 with no injuries, and a 2003 crash that resulted in a $1.7 million judgment.

WELLSTON • Kim Schlau went to her two daughters' graves Friday, minutes before embarking on what she hopes will become a way to ensure they di…

BELLEVILLE • Illinois Trooper Matt Mitchell admitted Friday that he was criminally responsible for an on-duty crash that killed two sisters, a…

Kim Schlau, mother of Jessica and Kelli Uhl who were killed in 2007 by an Illinois State Trooper, speaks at a press conference Wednesday in th…

Kimberly Schlau displays a photograph of her daughters, Jessica and Kellie Uhl, while speaking to recruits at the St. Louis County Police Academy on June 11, 2010. (Robert Cohen / rcohen@post-dispatch.com)

Matt Mitchell pauses in front of the elevator at in the St. Clair County Building on April 6, 2010, as his defense attorney, John O'Gara, talks to the media. Photo by Emily Rasinski, erasinski@post-dispatch.com