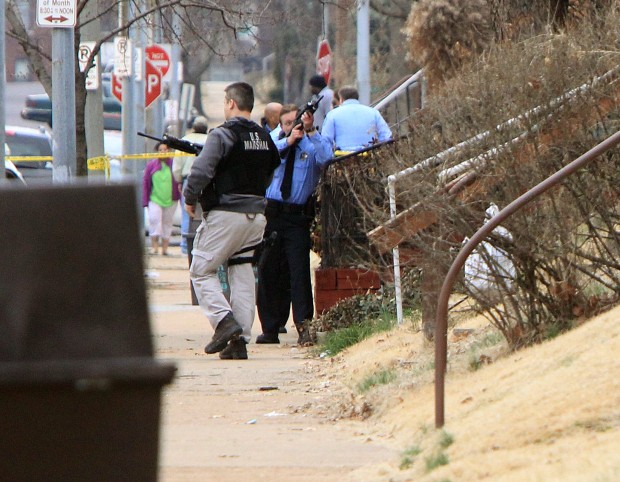 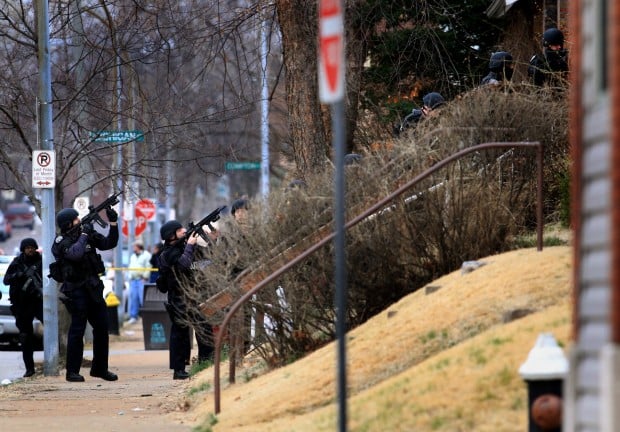 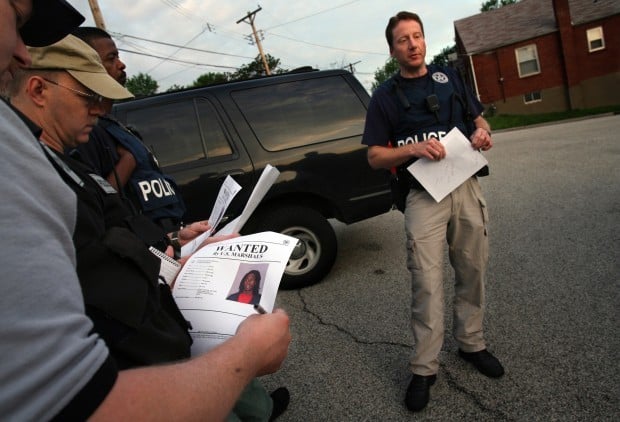 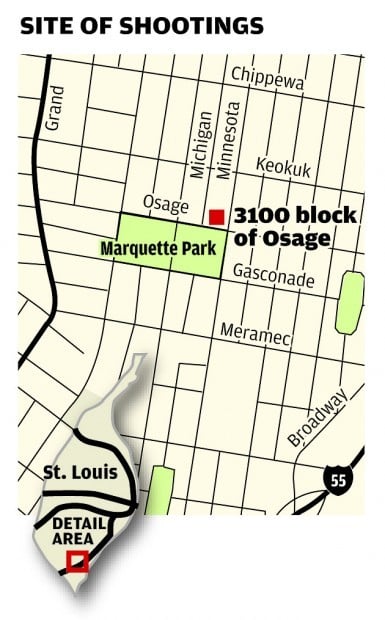 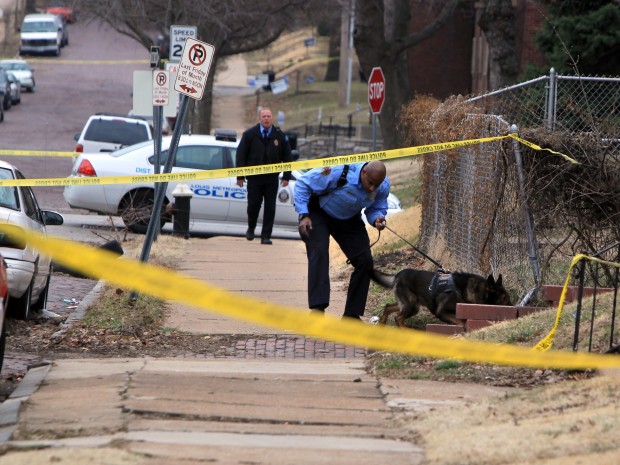 March 8, 2011 - St. Louis - Police at the scene of a shooting in the 3100 block of Osage Tuesday. Christian Gooden - cgooden@post-dispatch.com 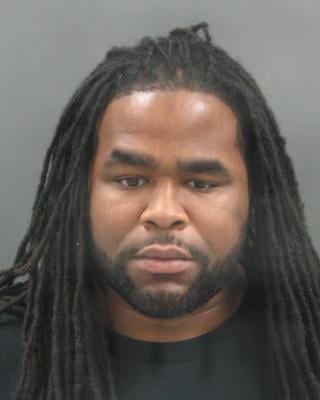 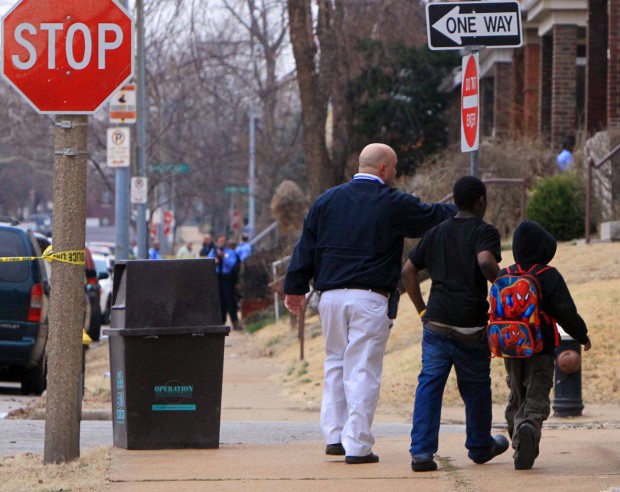 March 8, 2011 - A St. Louis police officer directs some children away from the area where two marshals and a police officer were shot in the 3100 block of Osage. Christian Gooden cgooden@post-dispatch.com 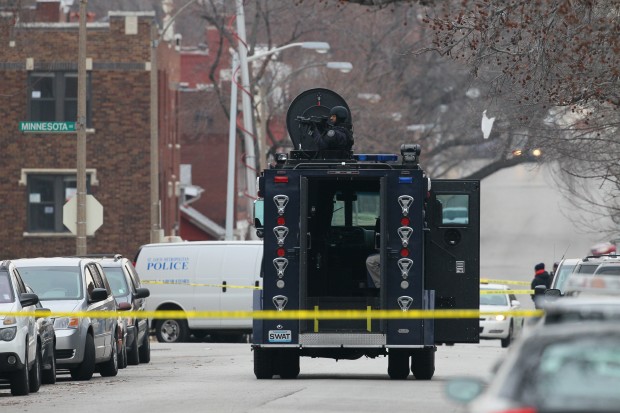 A SWAT team truck parked outside a home in the 3100 block of Osage Street. Photo by David Carson of the Post-Dispatch. 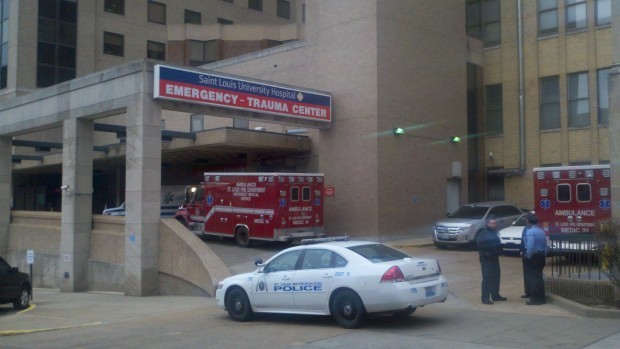 Two marshals were taken to St. Louis University Hospital. Photo by Joel Currier of the Post-Dispatch. 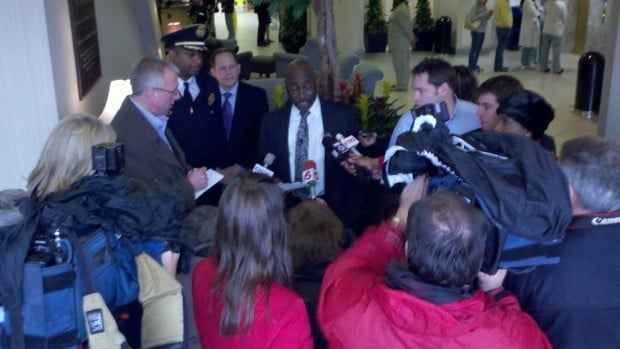 U.S. Marshal William Sibert speaks to reporters outside St. Louis University Hospital on March 8 after two deputy marshals were shot and taken to the hospital. Behind and to the left are St. Louis Mayor Francis Slay and St. Louis Police Chief Dan Isom. Photo by Joel Currier of the Post-Dispatch
Kim Bell

ST. LOUIS • A deputy U.S. Marshal seriously wounded during a shootout with a felon sought on various charges has died.

A family member said 48-year-old John Perry, who was shot in the head by 35-year-old Carlos Boles just before 7 a.m., died 12 hours after he was injured.

A fugitive-search team had gone into a two-family flat at 3117 Osage Street seeking Boles when he opened fire, hitting Perry, Deputy U.S. Marshal Theodore Abegg and a St. Louis city police officer before officers shot and killed him, authorities said. The home is near Marquette Park. Perry had been with the U.S. Marshals nearly 10 years.

Abegg, who has been with the agency three years, was listed in fair condition at St. Louis University Hospital with a gunshot wound to his ankle. The city officer, described by police as a 34-year veteran of the police department in his late 50s, was taken to Barnes-Jewish Hospital with graze wounds to his face and neck. He was treated and released.

Police first reported officers down by radio at 6:51 a.m.

The case unfolded after two city officers, assisted by eight deputy marshals, went to the residence before 7 a.m. to arrest Boles on indictments charging him with assaulting a police officer and possessing narcotics. Those charges are from an incident at the same address in October.

Police said the officers had escorted several children from the residence before the gunfire erupted. A police statement, released this afternoon, said officers checking the second floor encountered Boles, who wounded one deputy marshal and a city officer.

Officers returned fire, but Boles continued firing and hit a second marshal. Boles was then killed by more shots by officers. The police statement said it was unclear how many officers and marshals fired at Boles.

At the hospital, officials said the officer who had been wounded was grazed by a shot that struck his bullet-resistent vest.

St. Louis Circuit Court records show that Boles was accused of striking and choking a city police officer on Oct. 11 outside the address on Osage. Police reports say two uniformed officers suspected Boles of dealing drugs and tried to question him, but he fought and struck one of the officers. The report says officers used a Taser to subdue Boles.

Reagan, chief of staff for the St. Louis police department, said officers applied for warrants the day after the incident on Osage in October, but no charges were filed until the drug-analysis report was completed one month later. The grand jury then indicted Boles in January.

Court records show that Boles has six felony convictions. In 1993, he pleaded guilty of assault. In 2005, he pleaded guilty of four instances of felony possession of controlled substances and of resisting arrest. Police said the pill bottle that officers saw Boles toss at the scene in October was found to contain heroin and cocaine base.

The U.S. Mashal's Service is the enforcement arm for the federal courts. Among other duties, its deputy marshals track fugitives, protect the federal courts and juries, run the national witness protection program and transport federal prisoners. Nationwide, it employs more than 3,330 agents.

In declining to provide details about the incident this morning, city police officials said they are focusing on the injured marshals and officer.

"Our hearts and thoughts and prayers go out to the families right now," Isom said.

Police summoned a SWAT team to the residence after shots were fired because they weren't sure who still was inside the brick flat.

Sannita Boles, who said she is Carlos Boles' sister, said her three children, 8, 13 and 15, were staying with her brother and his girlfriend at the home.

Sannita Boles said her brother had been in and out of jail, but she didn't know why.

Family members said Carlos Boles had two children — a boy, 5, and a girl, 2.

At one point, when police still thought someone might be alive inside, Sannita Boles collapsed and lay sobbing on the grass at a park across the street. Police and her friends helped her up and asked everyone to move back so they wouldn't be in the line of fire.

"He's still in there," she wailed about her brother.

One woman related to the suspect ranted and got into the face of an officer, screaming, "Why did you do this?"

Friends grabbed her and pulled her back. "It wasn't him," one said.

Tony Johnson, who lives nearby, explained why he thinks many in a crowd of about 100 people were growing increasingly angry as they waited outside the home..

"Complete anger," he said. "People around here don't like cops."

Johnson, 22, added: "They should've sent a relative in to talk him out rather than go in shooting."

But Daniel Shown, 31, who said he moved nearby about three months ago, said he supported the police.

"There are concerns about crime in this community," Shown said. "We are happy police are there to protect us. It's a tragic situation. Nobody's happy about anybody being shot, but police are there to do a job and enforce the law. There are many here happy that they are doing their job."

While in prison in 1996, Boles was charged with possessing a controlled substance inside a corrections facility. In 2005, while visiting his probation officer downtown, he was found to have cocaine base.

His mother, Theresa Beal, wrote a letter to the court in 2005 pleading for leniency for her son.

"Deep down in my heart I feel my son never really had a chance in life," she wrote. "I know he‘s no Angel, yet he isn’t the worse (sic) person either."

Denise Hollinshed and Tim O'Neil, both of the Post-Dispatch, contributed to this report.

EDITOR'S NOTE: Police have corrected information they gave earlier and are saying two marshals and a St. Louis officer were shot. The suspect's age as provided by family members was incorrect and has been corrected in this version.

Department wants records to find out who shared photo of man killed in shootout.

Homicide suspect shoots himself in Alton

He pleaded guilty to wreckless homicide.

Police are asking for public's help.

Jurors were split on fate of cop killer

Two members tell of even divide early on in sentencing phase for Todd Shepard, who was convicted in the death of Sgt. Michael King of University City.

March 8, 2011 - St. Louis - Police at the scene of a shooting in the 3100 block of Osage Tuesday. Christian Gooden - cgooden@post-dispatch.com

March 8, 2011 - A St. Louis police officer directs some children away from the area where two marshals and a police officer were shot in the 3100 block of Osage. Christian Gooden cgooden@post-dispatch.com

A SWAT team truck parked outside a home in the 3100 block of Osage Street. Photo by David Carson of the Post-Dispatch.

Two marshals were taken to St. Louis University Hospital. Photo by Joel Currier of the Post-Dispatch.

U.S. Marshal William Sibert speaks to reporters outside St. Louis University Hospital on March 8 after two deputy marshals were shot and taken to the hospital. Behind and to the left are St. Louis Mayor Francis Slay and St. Louis Police Chief Dan Isom. Photo by Joel Currier of the Post-Dispatch
© Copyright 2021 STLtoday.com, 901 N. 10th St. St. Louis, MO | Terms of Use | Privacy Policy
Powered by BLOX Content Management System from TownNews.com.
You don't have any notifications.