UPDATED with news of more cases assigned to prosecutor after she took maternity leave.

ST. LOUIS — An assistant prosecutor whose workload included some of the city’s highest-profile felony cases was assigned about 30 of those cases after she started maternity leave in May.

Among the recent acquisitions was a murder case that a judge threw out last week because no prosecutor had shown up for three court hearings in May, June and July. On Tuesday, that assistant prosecutor resigned, multiple sources told the Post-Dispatch.

St. Louis Circuit Judge Jason Sengheiser last Wednesday dismissed a 2020 first-degree murder case against Brandon Campbell, 30, saying the St. Louis Circuit Attorney’s Office had appeared to abandon its duty. A court document obtained by the Post-Dispatch shows Kimberly Arshi’s entry of appearance in the Campbell case was dated May 17 — a week after she began maternity leave on May 10. 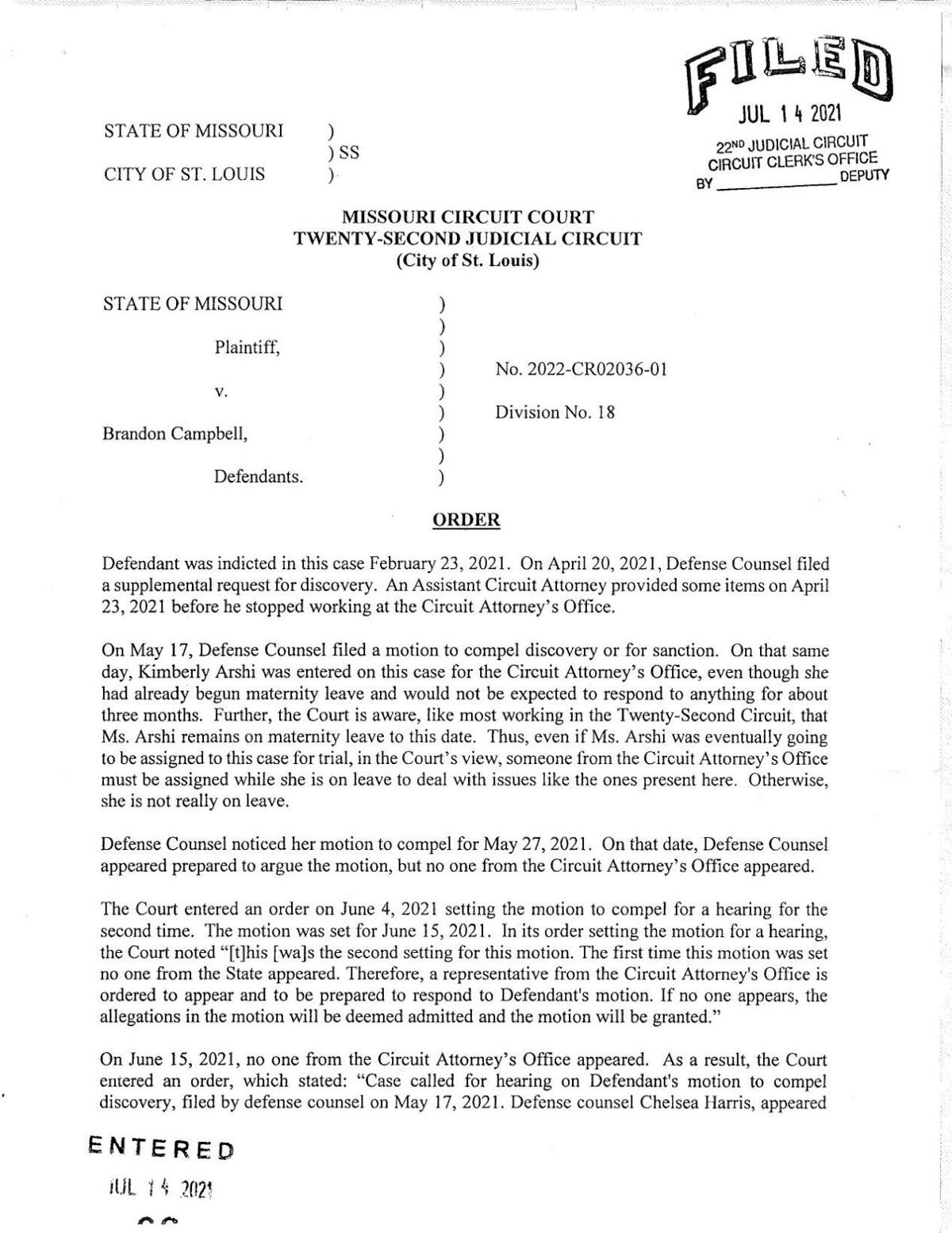 On Monday, Circuit Attorney Kimberly M. Gardner blamed the dismissal of charges against Campbell on “internal policies and procedures regarding family medical leave.” She said “corrective measures are needed to further prevent any future repeat occurrence of the incident in question,” without elaboration or explanation of why no one else was assigned the murder case while Arshi was on leave.

In the weeks after Arshi was at home, she picked up nearly 30 other felony cases including more than a dozen murders, a death penalty case, several assaults and robberies, according to court documents.

Arshi, who has been with the circuit attorney’s office since November 2017, could not be reached for comment.

Her resignation adds to the list of more than 90 prosecutors who have quit the circuit attorney’s office since Gardner began her first of two terms in 2017. Some left for better jobs in the legal world while others have said they became disillusioned with what they believe is a dysfunctional office.

A spokeswoman for Gardner said she could not comment on personnel matters. She also did not clarify Gardner’s statement nor explain why Arshi had picked up additional cases during maternity leave. It was unclear whether Gardner’s office assigned them to Arshi without her knowledge. Three defense attorneys in cases assigned to Arshi told the Post-Dispatch they had not communicated with her about those cases since she began leave.

Court cases are starting to move forward at a faster pace, after a pandemic slowdown over the past year.

According to court records, Arshi entered her appearance May 18 as co-counsel in the 2016 murder case against Philip Cutler, an alleged hit man in the shooting death of Jocelyn Peters in her Central West End home. Peters, a St. Louis elementary school teacher, was pregnant at the time.

In the murder case against Sanchez Swink, who is accused of fatally shooting a man nearly two years ago, Arshi’s first entry of appearance was filed May 17. Swink’s lawyer Nick Zotos said he has been waiting for more than 18 months for a proposed plea agreement and still doesn’t have complete evidence in the case. He said it’s not the only case in which he can’t get answers.

“I have three murder cases where I can’t get an offer for over a year,” Zotos said.

As for assigning Arshi cases while she’s on leave, Zotos said, “It’s just a small reflection of what’s going on in the office. Either they don’t care or they’re sloppy.”

Matt Waltz, a public defender for clients in at least two cases recently assigned to Arshi, said that when he took medical leave some time ago, his office did not assign him any new cases. He speculated that assigning Arshi cases while she’s on leave was a stall tactic until she returned.

On July 1, Arshi was assigned a 2019 murder case against Jalynn Garner, who pleaded guilty two years ago in the shooting death of a retired St. Louis police officer but was later permitted to withdraw his plea because he was a juvenile at the time.

Arshi also was recently given cases including two first-degree assault cases filed in April and a robbery case filed in January. Evidence lists in two of them filed in recent weeks include Arshi’s electronic signature and the names of paralegals for the circuit attorney’s office who appear to have submitted the documents on Arshi’s behalf.

In the case that Sengheiser dismissed last week, prosecutors recharged Campbell a day later but not before he was released from jail. The judge said the circuit attorney’s office ”abandoned its duty to prosecute those it charges with crimes” after no one from the office showed for three recent court hearings in Campbell’s case, and missed a court-ordered deadline to produce evidence. Campbell is accused of killing 30-year-old Randy Moore last year.

“The court does not take this action without significant consideration for the implications it may have for public safety,” Sengheiser wrote in his order. “... The Circuit Attorney’s Office is ultimately the party responsible for protecting public safety by charging and then prosecuting those it believes commit crimes.”

Peter Joy, a law professor at Washington University, said it’s not unusual for prosecutors to cover for colleagues on family or medical leave by filing pleadings on their behalf, particularly in the early stages of criminal cases. He said he sees no ethical problem with it and that it’s “pretty commonplace” in routine pleadings for prosecutor’s offices with multiple lawyers on staff.

Twelve weeks — the typical length of maternity leave — “is not a long time in felony cases,” Joy said. “It would depend on what the trial date is, and also when the person is anticipated back. So it may be reasonable because experienced trial lawyers may be able to pick up a case and get it ready in a couple months.”

Arshi’s resignation means all of her cases will have to be reassigned to other prosecutors.

Two of her higher-profile cases include those against two men accused of fatally shooting retired St. Louis police Capt. David Dorn during the looting of a pawn shop last summer and a man charged with the on-duty shooting death of St. Louis police Officer Tamarris Bohannon in the Tower Grove South neighborhood, also last year.

Prosecutors say the former principal, Cornelius Green, used money stolen from his school to pay his friend to kill Joceyln Peters, a teacher, in 2016.