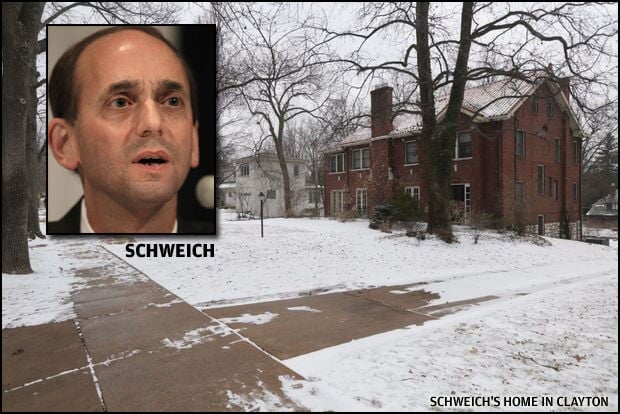 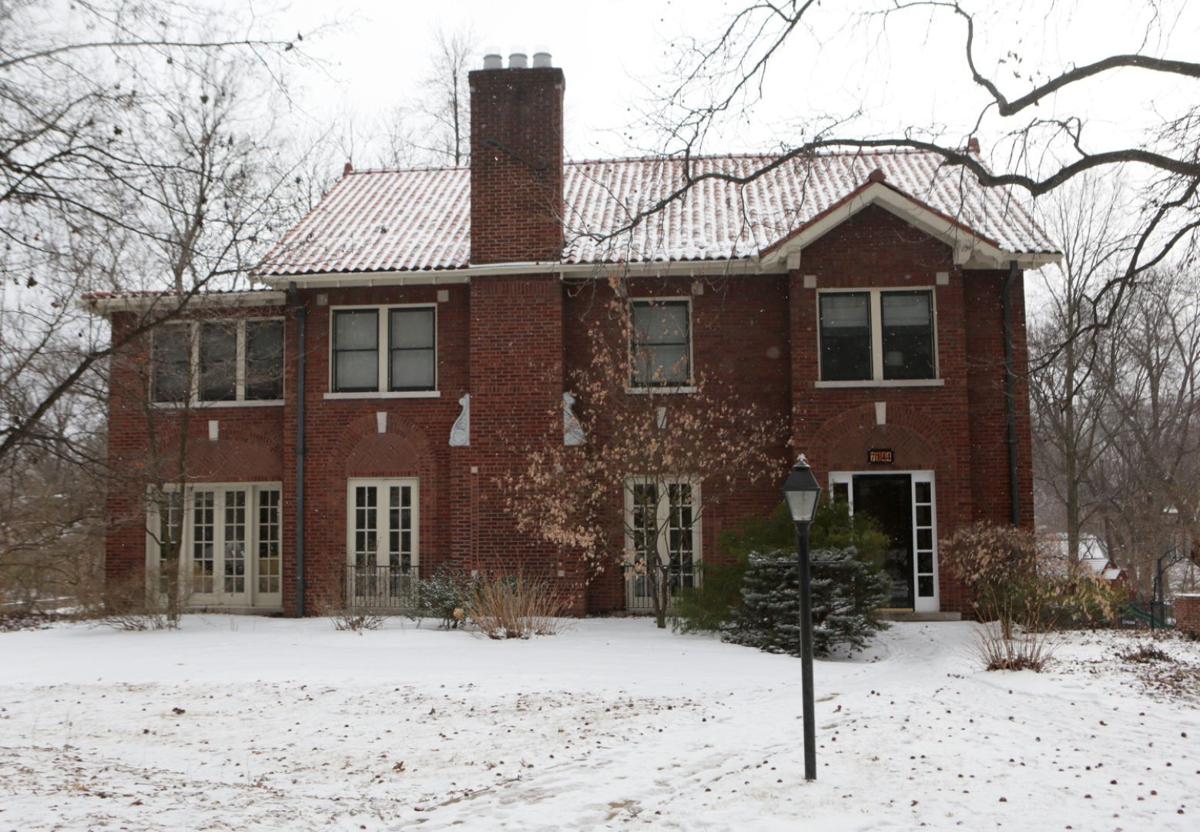 The home of State Auditor Tom Schweich, at the 7100 block of Wydown Boulevard, after an incident there on Thursday, Feb., 26, 2015 in Clayton. Photo by Huy Mach, hmach@post-dispatch.com 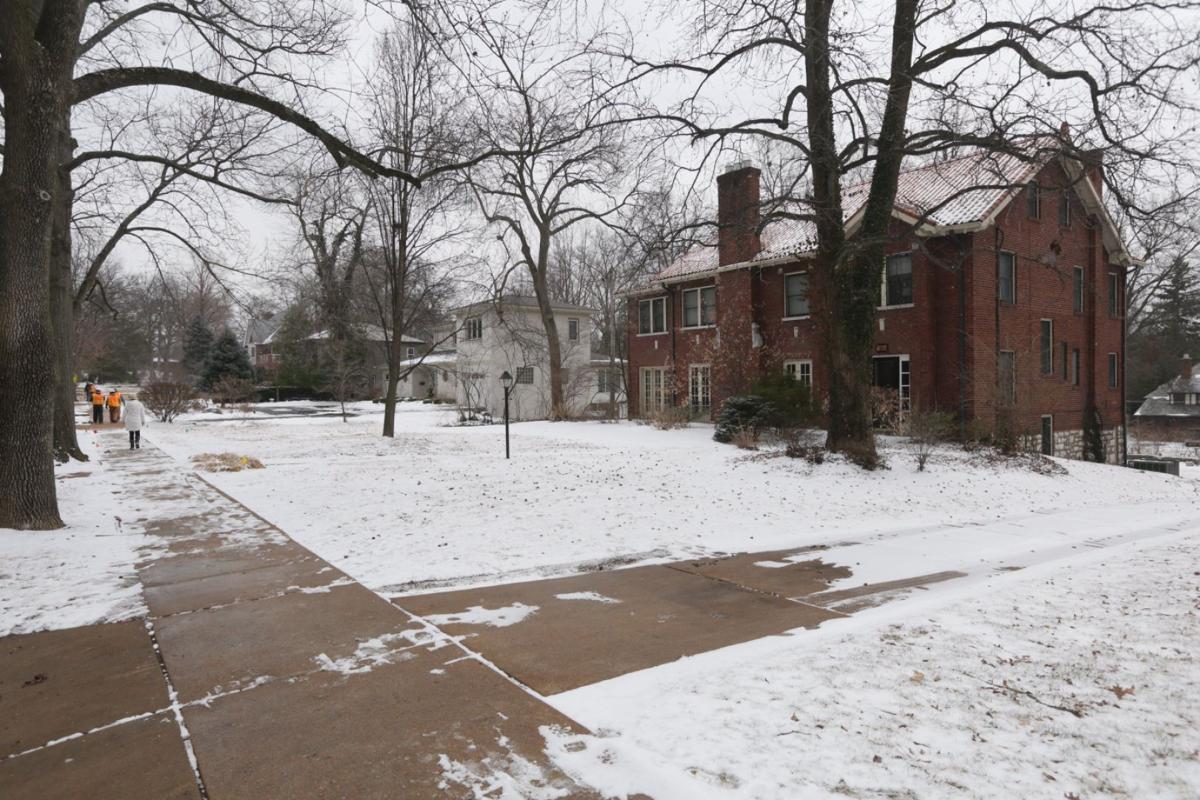 The home of State Auditor Tom Schweich, in the 7100 block of Wydown Boulevard, pictured after an incident there on Thursday, Feb., 26, 2015 in Clayton. Photo by Huy Mach, hmach@post-dispatch.com 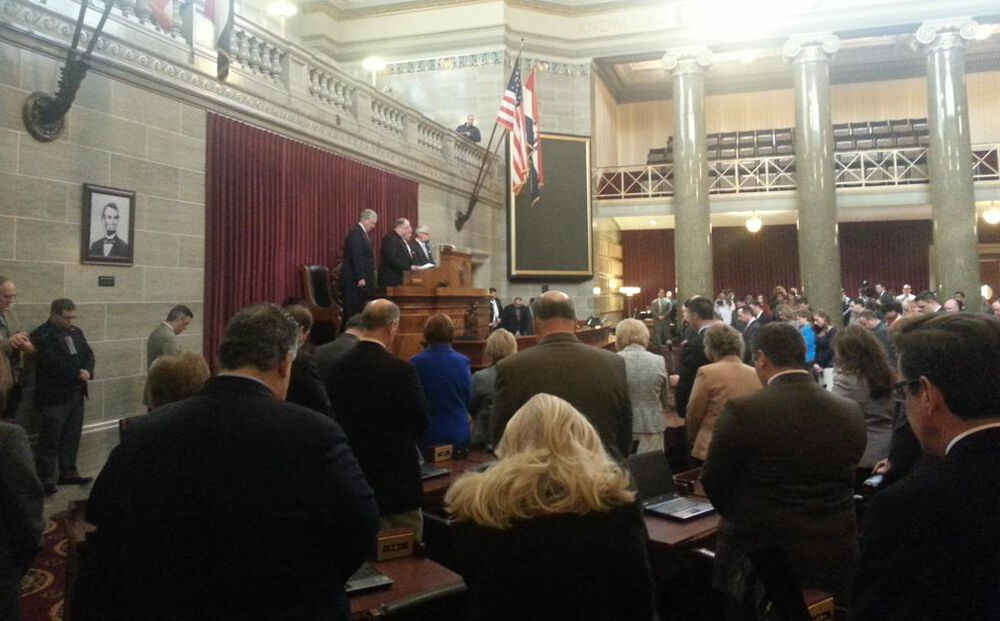 Legislators gather in the Missouri Capitol to pray for Auditor Tom Schweich. He died Thursday. Photo by Alex Stuckey 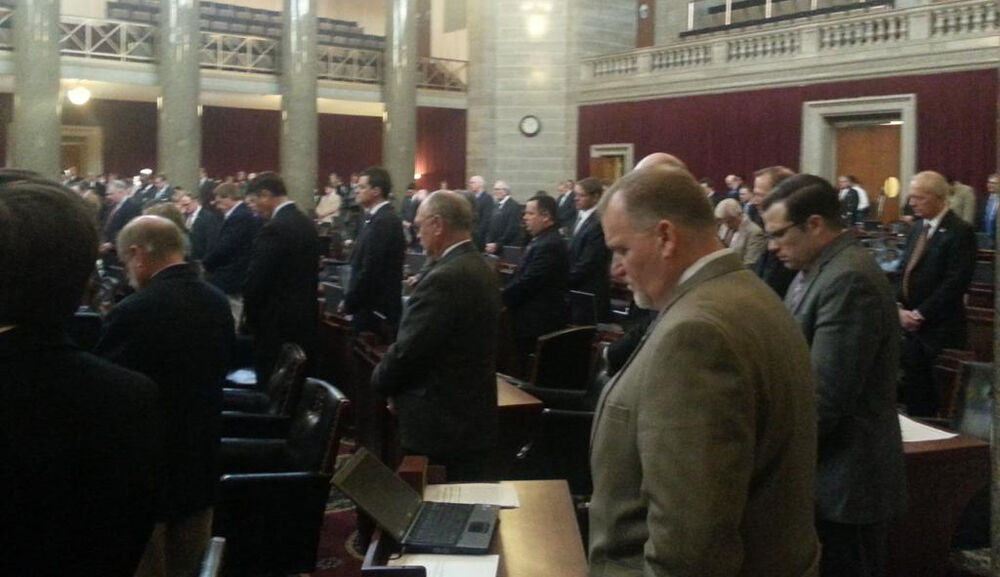 Missouri legislators gather in the Capitol to hold a prayer session for Missouri Auditor Tom Schweich. He died Thursday. Photo by Alex Stuckey

ST. LOUIS • Tom Schweich, Missouri’s Republican state auditor and a leading contender for the governor’s office in next year’s election, died Thursday after apparently shooting himself in his Clayton home.

The sudden death of the second-term auditor shocked and saddened the state’s political establishment and roiled the race for governor barely a month after it began.

“What we know at this point suggests an apparent suicide,” Clayton Police Chief Kevin Murphy told reporters in a news conference Thursday afternoon. He said there was “nothing to support anything other than that at this point,” and said Schweich died from a single gunshot wound.

Murphy said he didn’t know whether Schweich left a note. The chief said an autopsy and investigation are pending.

Earlier in the day, a police source told the Post-Dispatch that Schweich’s wife was in another room of their house when she heard her husband making phone calls, followed by a gunshot. Schweich had been shot in the head, the source said.

A 911 call was made from Schweich’s home at 9:48 a.m., seven minutes after Schweich had left a voicemail requesting an interview with a Post-Dispatch reporter.

Schweich was taken to Barnes-Jewish Hospital where he was pronounced dead, Murphy said.

The Post-Dispatch interview, which was also to include an Associated Press reporter, was set at his Clayton home for later in the day.

The subject of the interview, according to Schweich’s comments to the Post-Dispatch’s editorial page editor, was Schweich’s belief that a top state GOP official had spread false information about him.

Listen: The voicemail left for the Post-Dispatch

Schweich, 54, had a cadre of mentors and supporters in his gubernatorial run that included former U.S. Sens. John Danforth and Jim Talent, both Missouri Republicans, and friend and wealthy campaign contributor Sam Fox, the former U.S. ambassador to Belgium.

“I was never so surprised in my entire life to find out this happened,” Fox told the Post-Dispatch Thursday. “This guy was brilliant. This guy was unique. He had so much talent.”

Fox said he had scheduled a fundraiser at his house for Schweich. “He was raising money,” Fox said. “The money was pouring in.”

He said Schweich had not expressed any signs of personal or professional turmoil.

“None whatsoever,” Fox said. “Not to me nor to any friends that I’m aware.”

Schweich was re-elected last November to a second term as auditor. Under the Missouri constitution, the governor has the power to fill vacancies of statewide officers.

Schweich announced last month that he would seek the Republican nomination for governor in 2016 — a race that had already fostered unusually bitter in-party conflict despite the primary being more than a year away.

Schweich, known for his intensity and ambition, had positioned himself in the gubernatorial campaign as a tenacious crime-fighting reformer, based on his aggressive audits of public officials throughout Missouri.

Last weekend, at the Missouri GOP’s annual Reagan-Lincoln Days convention in Kansas City, he cheerfully joked with reporters as he scooped ice cream for conventioneers. He also gave an impassioned, rousing speech that whipped up the hundreds of attendees and prompted another official on stage to joke that Schweich had had too much coffee.

When Schweich announced his gubernatorial campaign, he promised to attack corruption in the state Capitol. He said his main Republican primary opponent, former Missouri House Speaker Catherine Hanaway, was “bought and paid for” by megadonor Rex Sinquefield because Hanaway had received about $1 million in political donations from Sinquefield.

Schweich’s critics struck back. Last week, a political action committee called Citizens for Fairness in Missouri aired a radio ad saying that Schweich could be “easily confused for the deputy sheriff of Mayberry.” The ad, which mimicked the voice of the main character from the dark political drama “House of Cards,” called Schweich a weak candidate whom Democrats would “squash like a bug” if he won the GOP nomination.

Earlier this week, former Navy SEAL Eric Greitens confirmed he was considering jumping into the Republican primary as well.

On Tuesday morning, Schweich confided in Post-Dispatch Editorial Page Editor Tony Messenger that he believed that John Hancock, the newly elected chairman of the Missouri Republican Party, had spread disinformation about Schweich’s religion. That topic was what Schweich wanted to discuss with reporters for the Post-Dispatch and the Associated Press Thursday.

In several conversations via text and phone in the days leading up to Thursday morning, Schweich told Messenger that Hancock mentioned to people in passing that Schweich was Jewish. Schweich wasn’t Jewish. He was a member of the Church of St. Michael & St. George, an Episcopal congregation in Clayton.

Schweich told Messenger he believed the mentions of his faith heritage were intended to harm him politically in a gubernatorial primary in which many Republican voters are evangelical Christians. He said his grandfather was Jewish, and that he was “very proud of his connection to the Jewish faith.”

“He said his grandfather taught him to never allow any anti-Semitism go unpunished, no matter how slight,” Messenger said in a written statement.

Schweich told Messenger that he attempted to ask Sen. Roy Blunt to intervene but was unable to speak with him. Schweich said he had lunch with Blunt’s son, lobbyist Andy Blunt, according to Messenger’s account.

Blunt’s spokeswoman, Amber Marchand, said the senator was very saddened by the loss. She confirmed the two spoke on several occasions the weekend prior but did not disclose the details of those private discussions.

Karen Aroesty, regional director of the Anti-Defamation League, said Schweich had contacted her, as well, earlier in the week concerning alleged anti-Semitism. She said she was waiting for Schweich to comment publicly on the issue before deciding whether to issue a statement.

“My understanding from the conversation was that that was going to be the focus, but I don’t know any more than that,” Aroesty said.

Hancock said Thursday that he may have said to someone last year that Schweich was Jewish, “but I certainly would not have said it in a derogatory manner.”

“I have been a public figure for nearly 30 years,” Hancock said. “No one has ever accused me of bigotry in any shape, manner or form.”

Hancock said he and Schweich discussed the matter on the telephone last November. “He told me he was aware I had made anti-Semitic remarks and I told him it was not true,” Hancock said.

This week, Hancock said he heard that Schweich intended to hold a news conference in Jefferson City to accuse Hancock of making an anti-Semitic remark to a specific person. Hancock said that rumored incident — which he declined to detail — was “demonstrably untrue.”

“To set the record straight,” Hancock said, he and his wife traveled to Jefferson City on Tuesday to attend the news conference, which they had expected to take place that afternoon. That news conference never took place.

Hancock, a political consultant, also said that while he has done research for Hanaway’s campaign in the past, he has “never spoken to a donor on behalf of Catherine Hanaway.”

Upon news of Schweich’s death, condolences came in from across the political spectrum, including glowing words from his political opponents.

Hanaway called him “an extraordinary man with an extraordinary record of service to our state and nation.” Hancock, in his capacity as GOP state party chairman, wrote: “Tom will be remembered as a tenacious, energetic, effective elected official who worked tirelessly on behalf of the citizens of this state and this nation.”

Schweich graduated from Clayton High School, Yale University and the Harvard University School of Law. He served as an intern for then-U.S. Sen. John Danforth, R-Mo., and later joined Danforth at the Bryan Cave law firm downtown, where Schweich became a partner. Schweich long had been close politically to Danforth.

When Danforth led the federal investigation in 1999 into the mass deaths at the Branch Davidian compound at Waco, Texas, he chose Schweich for chief of staff. He also worked with Danforth during the former senator’s service in 2004-05 as American ambassador to the United Nations, then with the U.S. State Department as a top official with the Bureau of International Narcotics and Law Enforcement.

Schweich returned to Clayton and to Bryan Cave in 2008, and was a visiting professor and “ambassador in residence” at Washington University.

In 2010, in his first bid for public office, Schweich unseated incumbent state auditor Susan Montee, a Democrat. He breezed to re-election last November, receiving 73 percent of the vote against two minor-party challengers. The Democrats did not run a candidate against him.

Schweich and his wife, Kathleen, were married shortly after he graduated from law school. They have two children.

In St. Louis, his civic work included chairing the air show committees for the VP Fair/Fair St. Louis and the St. Louis County Air Show. He periodically was a guest on KSDK (Channel 5) as a commentator on law and finance, and wrote books on law, business and personal finance.

If a man accuses somebody of something and then kills himself, what are we to think of the accusation? Not much, is what I’d say.

"What has been said is worse than anything in my memory, and that’s a long memory."

Hancock denies telling Trish Vincent that he had told others Schweich was Jewish.

In wake of Schweich's death, politics pushed aside by grief

Some want to rethink effect of scathing campaign rhetoric. His funeral is set for Tuesday.

Messenger: From voicemail to voicemail: The short political life and times of Tom Schweich

In the end, he reached out to me, perhaps because he didn't have anybody else. Nobody in his party wanted him to hold a news conference suggesting that there were anti-Semites in the Republican Party. “I won't back down,” he told me. I believed him.

Listen to Tom Schweich's voicemail he left the P-D

Tom Schweich's voicemail he left the Post-Dispatch Thurday morning minutes before his death.

The home of State Auditor Tom Schweich, at the 7100 block of Wydown Boulevard, after an incident there on Thursday, Feb., 26, 2015 in Clayton. Photo by Huy Mach, hmach@post-dispatch.com

The home of State Auditor Tom Schweich, in the 7100 block of Wydown Boulevard, pictured after an incident there on Thursday, Feb., 26, 2015 in Clayton. Photo by Huy Mach, hmach@post-dispatch.com

Legislators gather in the Missouri Capitol to pray for Auditor Tom Schweich. He died Thursday. Photo by Alex Stuckey

Missouri legislators gather in the Capitol to hold a prayer session for Missouri Auditor Tom Schweich. He died Thursday. Photo by Alex Stuckey