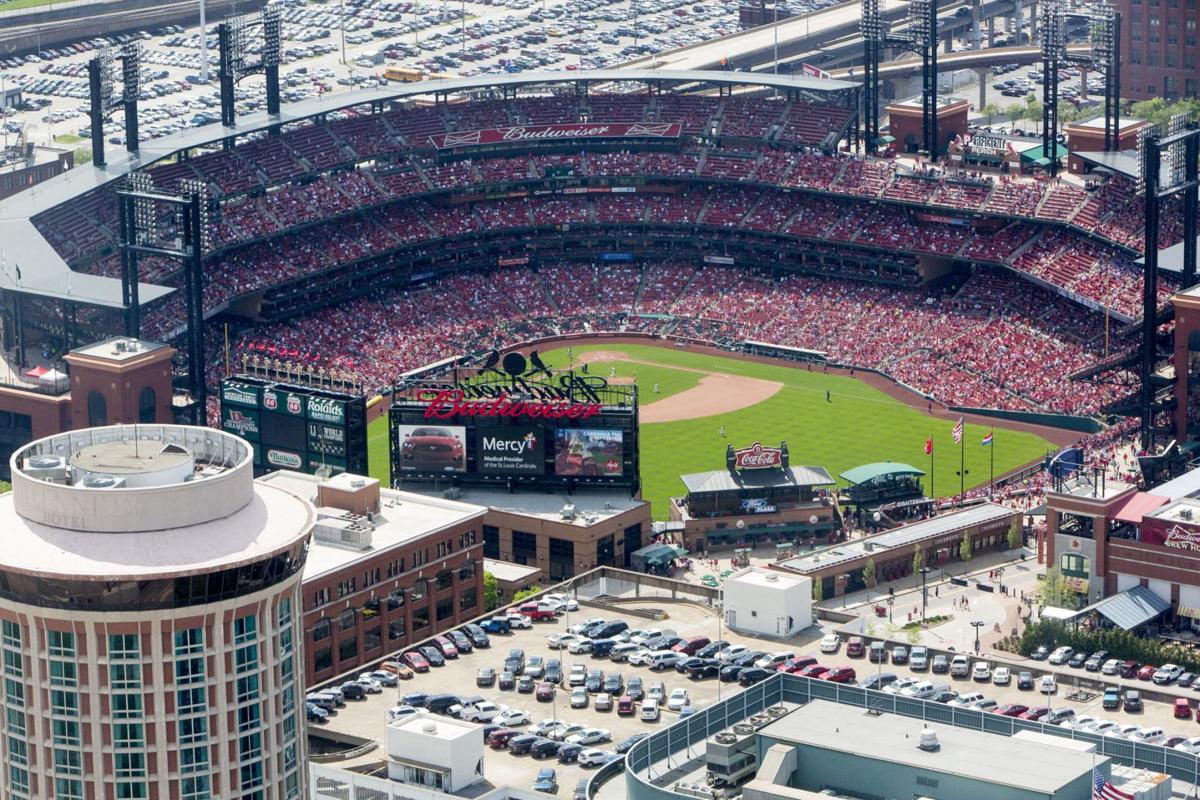 WEDNESDAY, APRIL 19, 2017 - A St. Louis Cardinals game proceeds Wednesday at Busch Stadium as seen in this view of downtown St. Louis from the top of the Gateway Arch. ©Photo by Jerry Naunheim Jr. 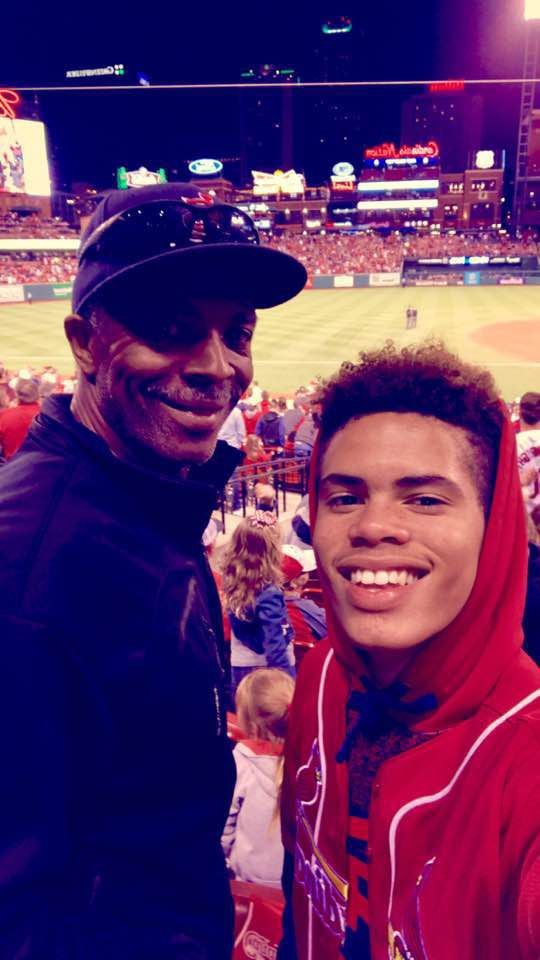 Todd Porter (left) and his son, Christopher Porter, 13, (right) of O'Fallon, Ill., snap a picture moments before a woman sitting behind them at Busch Stadium on May 2, 2017, was struck by a stray bullet. Photo courtesy of Todd Porter.

ST. LOUIS • A woman was grazed in the arm by a stray bullet during Tuesday night’s Cardinals game inside Busch Stadium.

Police sources say there had been a call about shots fired near the 14th Street and Chouteau Avenue area moments before the woman was struck, and that the bullet may have come from someone shooting into the air.

That intersection is less than a mile from Busch.

St. Louis police said the woman, 34, was sitting in her seat in Section 141 about 9:40 p.m. when she felt pain to her arm. She removed her jacket and noticed a small abrasion to her elbow. She went to the first aid station, and workers there contacted an off-duty police officer working a secondary security job there, police said.

The victim could not be reached for comment. Her mother told the Post-Dispatch the victim had retained an attorney and they had been advised not to speak to reporters.

Todd Porter, 54, of O’Fallon, Ill., was at the game with his 13-year-old son, Christopher, and was seated directly in front of the victim. She suddenly said, “Wow, I think I’ve been shot,” just as the eighth inning was coming to a close, Porter said.

“We thought she was joking, but everybody turned around and she showed me the blood coming down from her elbow,” Porter said. “It looked real purple and red and it looked like there was a hole in her jacket.”

The man who was sitting with the victim then said, “We need security, she’s been shot,” Porter recalled.

Porter said the woman picked up the bullet slug from underneath her seat near the first base line.

A bullet slug was found “in the immediate area around the victim’s seat,” according to police. They said it appeared the bullet came from outside the stadium.

In a statement, the Cardinals confirmed the incident and said: “There is nothing more important than the safety of our fans, and the Cardinals are grateful that no one was seriously injured.”

Team President Bill DeWitt III said security at the ballpark has never been tighter. Safety measures include surveillance cameras inside and outside; three explosives-detection dogs and a fourth on the way; two SWAT teams; and new metal detectors, which are all linked.

“There are millions of dollars being spent on additional security, personnel, and procedures to be protective of the fans and the experience at the ballpark,” Dewitt said. “We are prepared, and we will continue to be more prepared.”

Porter said the woman hit by the bullet was in shock.

“We were all in shock,” he said. “They were just sitting there like any other couple, laughing and giggling, and a little bit later is when that happened.”

Porter said he and his son were sitting in seats 7, 8 or 9 in Section 141 when it happened, and “could have thrown a ball and hit first base.” His son sat in front of the victim.

“It could very easily have hit him,” Porter said.

Porter said he and his son then left the game. “I told my son, ‘Let’s get up out of here before someone else gets to shooting,’” Porter said.

Porter said he was surprised that the incident had not been reported to the public sooner.

“This is terrible,” he said. “Someone is shot in the elbow and no one hears about it? Let the public know what’s going on. If somebody out there is shooting, I understand you didn’t want people to get up during the game and run, but at least let people know this happened as soon as possible and know, ‘We’re sorry to hear it happened to her and checking to find out what happened.’”

The police department released a statement confirming the incident in response to questions Wednesday morning from the Post-Dispatch.

“This further amplifies our yearly message of encouraging ‘Fun Without Guns,’” the statement concluded. “We know ‘what goes up must come down,’ and in this case, an innocent victim was struck. The department constantly stresses the importance of safety and responsible gun ownership.”

This isn’t the first time fans have been hit by gunfire during baseball games.

In 2012, a man was bruised in the leg by a stray bullet at Tropicana Field during a Miami Marlins-Tampa Bay Rays game in St. Petersburg, Fla., and returned to his seat afterward. Police said there had been a shooting about a mile away from the stadium around the same time, according to USA Today. Tropicana Field is a domed stadium.

In 2000, a fan was hit by a bullet that passed through part of her abdomen and hit her left elbow while she was sitting in the stands at Kauffman Stadium during a Pittsburgh Pirates-Kansas City Royals game. A second shot struck another fan’s chair in the upper deck, according to the Associated Press.

The victim sued the Royals, with the two sides disagreeing about whether the shots were fired from within the stadium. The team settled with her in 2001 for an undisclosed amount, according to The Associated Press.

And in 1965, a robber trying to hold up the ticket office at Sportsman’s Park on North Grand Boulevard fired a shot, which then ricocheted about 400 feet across the diamond and grazed 13-year-old Carolyn Yount in the throat during a Philadelphia Phillies game against the Cardinals.

That girl, now Carolyn Yount Pomicter, 65, of Maryland, contacted the Post-Dispatch Wednesday. She said she couldn’t believe history had repeated itself.

“My parents didn’t retain an attorney back then,” Pomicter said. “We were compensated with three baseball game tickets!”

Denise Hollinshed and Derrick Goold of the Post-Dispatch contributed to this report.

Since St. Louis is becoming well-known for its gun violence, it's comforting to hear that police think the shot that grazed the woman in Busch…

Cardinals are revisiting where their logo took flight — Ferguson

A free event this weekend in Ferguson takes Cardinals officials back where the birds first landed on a bat.

WEDNESDAY, APRIL 19, 2017 - A St. Louis Cardinals game proceeds Wednesday at Busch Stadium as seen in this view of downtown St. Louis from the top of the Gateway Arch. ©Photo by Jerry Naunheim Jr.

Todd Porter (left) and his son, Christopher Porter, 13, (right) of O'Fallon, Ill., snap a picture moments before a woman sitting behind them at Busch Stadium on May 2, 2017, was struck by a stray bullet. Photo courtesy of Todd Porter.