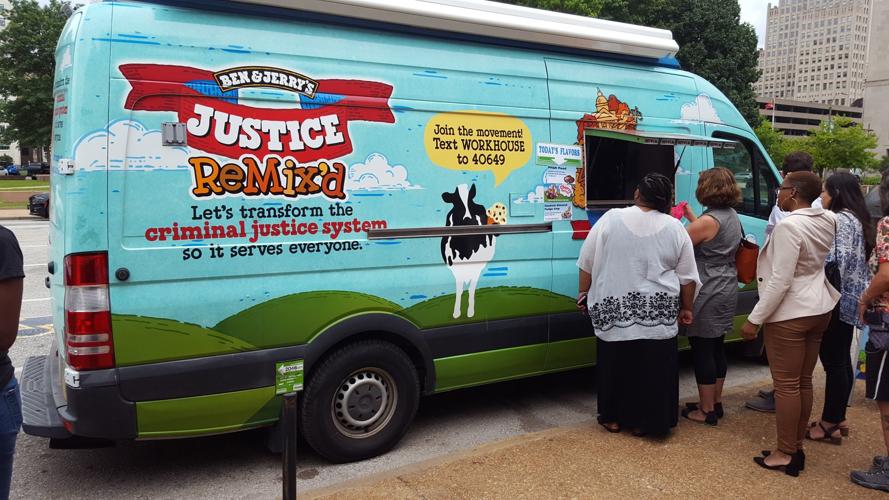 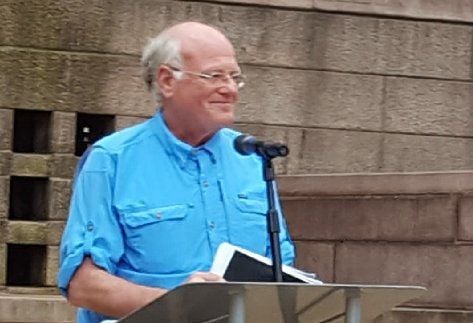 ST. LOUIS — Activists seeking to close the City Workhouse are getting some moral and practical support from Ben and Jerry's, the ice cream company known for its advocacy of social causes.

About 100 supporters of the closure campaign gathered outside City Hall downtown Wednesday afternoon to hear Ben and Jerry's co-founder Ben Cohen and other speakers decry the facility.

They also urged those present to contact city aldermen to remove money for the facility from the city budget for the  fiscal year starting July 1.

"Now is the time to divest money from this prison that is doing more harm than good," the Vermont-based Cohen said. He said the $16 million slated for the facility should be diverted to addressing "the root causes of why people end up in prison in the first place."

A Ben and Jerry's truck, meanwhile, has begun traveling across the city handing out free ice cream "and urging people to get engaged on this issue," company spokeswoman Laura Peterson said. The truck will do so until the Board of Aldermen votes on the budget later this month, she said.

Among the truck's stops was the rally, which was held on the Market Street side of City Hall just below Mayor Lyda Krewson's office.

Krewson and other city officials insist that the 53-year-old Hall Street building, formally called the St. Louis Medium Security Institution, is needed because the much newer city jail downtown doesn't have enough room to house all the city's pre-trial detainees.

Officials have said although the facility is old, it isn't inhumane and that many allegations about substandard conditions there are out of date.

Although the close-the-workhouse campaign won support this year from City Comptroller Darlene Green, money to run the facility was included in the proposed budget endorsed by the aldermanic budget panel and the city's top fiscal board.

Ben and Jerry's has been owned the past two decades by Unilever, a Netherlands-based consumer goods conglomerate.

‘Justice ReMix’d’ is described as cinnamon and chocolate ice cream with gobs of cinnamon bun dough and spicy fudge brownies.