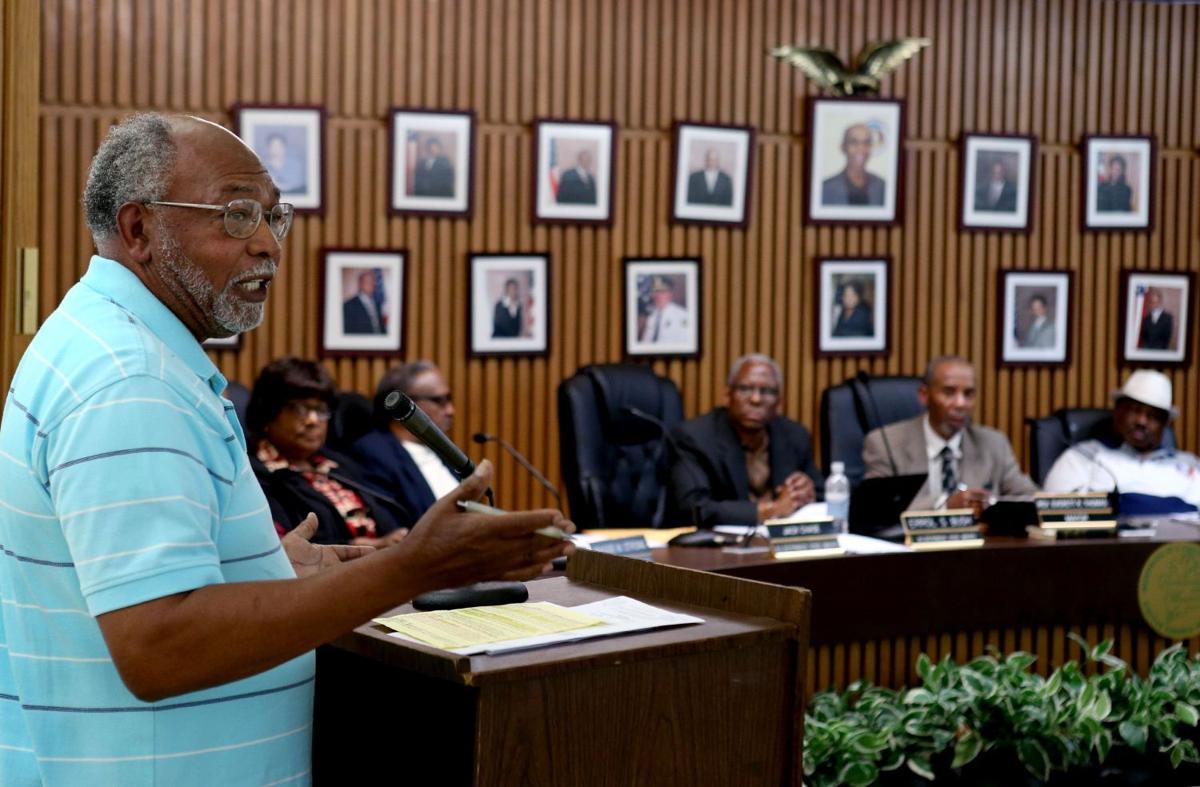 John Ditto, 77, a resident of Northwoods for about 40 years, addresses the Northwoods City Council during a meeting at City Hall on Tuesday, May 12, 2015. Ditto was expressing his concerns about a flier distributed to residents asking them to make a choice between paying for their own trash collection or cutting municipal staff. Photo By David Carson, dcarson@post-dispatch.com 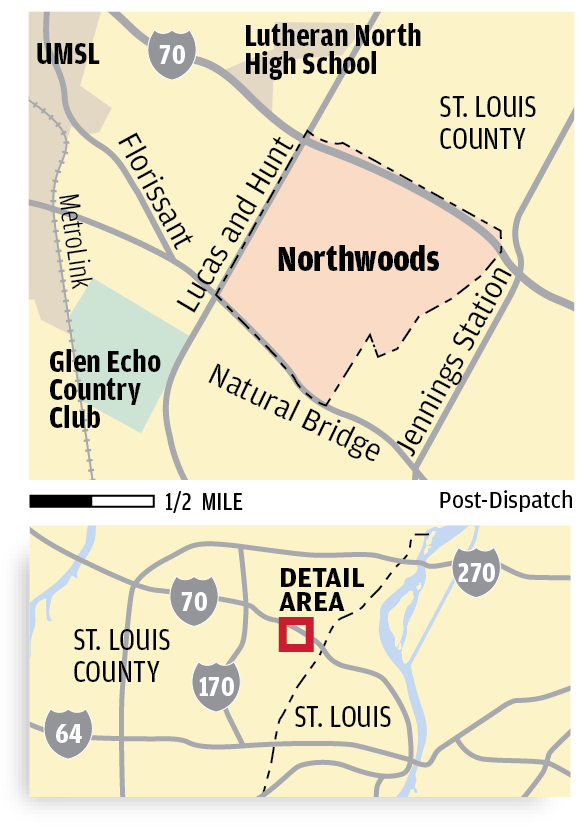 The City of Northwoods distributed this flyer asking for residents to choose between two "Hard Choices" regarding its financial crisis. The city asked resident to choose to either "pay their own trash collection bill" or "reduce municipal staff."

NORTHWOODS • Johnny Clerkley has lived in Northwoods for 45 years. He’s proud of the picturesque streets lined with oaks, tidy yards adorned with flowers and flags, and campy wood street signs that set Northwoods apart from the rest of north St. Louis County.

But Clerkley, 83, doesn’t like the question posed to him by city officials.

Residents in this community of 4,200 people are being asked to “reluctantly choose” one of two options: either pay $20 monthly for what has been free trash pickup, or see city positions — including possibly the entire police force — disappear.

Those options were laid out in a flier that was distributed to residents by the city this month with the headline: “Northwoods Revenue Crisis … A Call for Residents to Help Save the City.” People are being asked to vote their choice, then drop it off in a ballot box at City Hall to give city leaders a sense of what people want.

“That’s kind of rough on both ends,” Clerkley said. “Pay for trash or people get laid off.”

City officials say it’s an unavoidable reality if a municipal courts bill that the state Legislature approved last week becomes law. And they aren’t the only ones facing “difficult choices” like the flier describes.

The bill awaiting Gov. Jay Nixon’s signature reduces what St. Louis County municipalities can raise in traffic fines to 12.5 percent of their general operating revenue from 30 percent. The rest of the state would have a 20 percent cap.

For municipalities such as Northwoods, which derives about 26 percent of its general fund revenue from court fines and fees, it will most likely mean a debilitating reduction in services, unless officials can find other ways to raise the money.

Some officials have predicted small cities in north St. Louis County will cease to exist. They are already hinting at mounting a legal challenge if Nixon signs the legislation as expected.

The Rev. Everett Thomas, Northwoods’ mayor, said charging for trash pickup would generate about $140,000 a year, barely a third of the $400,000 it expects to lose in annual revenue because of the Macks Creek Law.

Working out the math on a calculator in his living room Tuesday, Thomas said the city would probably have to lay people off even if it starts charging for trash collection.

Dave Leipholtz, of Better Together, a group that has been studying the benefits of consolidating municipal services and governments, found it notable that the conversation has shifted to budget cuts now that court revenue is being cut.

“People aren’t saying, ‘Oh, no, justice won’t be carried out,’ They’re saying, ‘Oh, no, now we have to pay for trash pickup,’” he said. “Somewhere, we lost our way in terms of what the municipal court system is supposed to do.”

The revenue cap is just one element of a bill that could cripple the tiniest of the municipalities. Less talked about are a set of “minimum standards” that were added as an amendment from House Speaker John Diehl, R-Town and Country.

The provisions apply only to cities or towns in a county with a charter form of government and more than 950,000 people — i.e. St. Louis County. Diehl has said it provides the basics of what citizens should expect from their government.

Included are requirements that municipalities have, within three years, an annual audit, insurance, a cash management and accounting system, and written policies on police use of force and crime data collection, among other things.

It sounds simple but could nonetheless pose a challenge for some cities. Take Uplands Park, a village of five square blocks, which for three years existed without a formal budget.

Henry Iwenofu, former chairman of the village, noted: “All the stuff you just listed requires resources, and as you know, most of the small municipalities cannot afford to do that.”

Iwenofu’s concern about that is a common one: “You can kill a municipality, but what then replaces it? At the end of the day, the citizens of Uplands Park still need services from their government.”

The standards also require that, within six years, police departments in the county gain accreditation through either the Commission on Accreditation for Law Enforcement Agencies or the Missouri Police Chiefs Association.

The commission program is set up so that a police agency of any size can participate. But, Fitch noted, it carries a cost and usually takes at least two years to meet the standards. Some St. Louis County police departments are notoriously dysfunctional.

“I guarantee you, six years from the date this bill goes into effect there will be many police departments that will be waiting to see what is going to happen to them because they will not be accredited,” he said. “They have a hard time buying red lights for their cars, let alone developing policy and enacting policy and then making sure the policies are being followed.”

Thomas, Northwoods’ mayor, said he is proud the city provided free trash service; in most municipalities, homeowners pay extra for it.

But he said it was worth trying to preserve the city’s 21-officer police force, although the city has decided not to fill the equivalent of 2½ full-time positions that are vacant.

“I don’t think the residents here would approve of us going to St. Louis County,” he said. “What I get unofficially is that they support residents picking up their own trash.”

He said he was upset at what seems to be a conspiracy to hurt north St. Louis County municipalities.

“Because of Ferguson, most of us mayors feel the Legislature is trying to punish us,” he said.

At a Board of Aldermen meeting Tuesday night, residents complained that they had been left in the dark about the trash collection plan. City officials promised there would be meetings on the issue.

In an interview earlier in the day, Joe Boggiano, 34, said he bought a home in Northwoods for him and his wife in 2010. He said he recently left a job as a neuroscientist for the better pay working as a deckhand on a Mississippi River tugboat. He’s on the river up to six months a year and likes knowing police will watch his property while he’s gone.

“I wouldn’t mind paying for trash,” he said. “I wouldn’t want anyone to lose their jobs, especially the police. It would be nice to keep them and train them better.”

But some residents don’t accept the city’s claims.

“They’re going to raise taxes?” asked Joann Johnson, who has lived in the city for 40 years. “Don’t they go up anyway? Every time you get a utility bill you see Northwoods taxes in it.”

He said the city relied too heavily on writing tickets, causing the crisis. With the state’s action, he said, it’s plain “they shouldn’t have been counting on tickets in the first place.”

Residents are fed up with the constant fines and fees associated with living in a cash-strapped city. If Northwoods doesn’t survive, he said, “I wouldn’t care, to tell you the truth. It wouldn’t make no difference.”

A previous version of this article contained an incorrect spelling of Clerkley's name.

Some bad practices are 'inadvertent," Frank Vatterott says, having been passed down "generation to generation"

Nixon’s announcement comes months after the Ferguson Commission asked for a massive increase in police training hours and skills.

A gesture of goodwill precedes the launch of major court reforms across St. Louis County.

Courts don't have that authority for nonmoving violations, but that hasn't stopped some from doing it.

The proposed legislation would allow the jailing of people who failed to pay minor court or ordinance fines.

John Ditto, 77, a resident of Northwoods for about 40 years, addresses the Northwoods City Council during a meeting at City Hall on Tuesday, May 12, 2015. Ditto was expressing his concerns about a flier distributed to residents asking them to make a choice between paying for their own trash collection or cutting municipal staff. Photo By David Carson, dcarson@post-dispatch.com

The City of Northwoods distributed this flyer asking for residents to choose between two "Hard Choices" regarding its financial crisis. The city asked resident to choose to either "pay their own trash collection bill" or "reduce municipal staff."