WELLSTON — The store clerk who streamed live Facebook video showing a dying police officer at a Wellston market Sunday says she regrets doing it and is now getting death threats.

“I don’t know why I went to Facebook. I don’t know,” Kashina Harper said through tears Monday. “I regret it. I didn’t know the officer was going to die.”

Harper, 34, said she only started videotaping Police Officer Michael Langsdorf on the ground after she called for help. She said she knelt beside him, reached for the radio near his belt and pushed the button to let a dispatcher know an officer had been shot.

“I’m the one who tried to save that man,” Harper said. “I went to his walkie-talkie. I said, ‘A police is down. Somebody shot him. 6250 Page. Can you please hurry up?’ I was calling for help. I held his hands.”

Then she stepped back and live-streamed for more than two minutes, showing two women comforting the officer until police officers arrived. The other women also tried using the radio to call for help.

An editor with the Post-Dispatch briefly linked to Harper’s video Sunday on STLtoday.com, then deleted the link. The newspaper has acknowledged that posting the link was bad news judgment and has apologized to the officer’s family and to readers (See page A2).

Langsdorf, 40, was fatally shot at Clay’s Wellston Food Market Restaurant on Sunday, then died at a hospital. Langsdorf, an officer with North County Police Cooperative, was called to the market to investigate a bad check complaint. He was shot within minutes.

Harper said Sunday was her normal day off work but she came in anyway because she wanted to make extra money selling food.

In an exclusive interview with the Post-Dispatch, Harper described the demeanor of the man who would shoot Langsdorf about 4:30 p.m. Sunday. About 15 minutes earlier, Harper had sold him a plate of soul food. Harper mentioned to her co-worker that the man was acting “weird.”

“He was just mumbling. Some people when they mumble, they’re on some kind of drugs. It felt like he was on something,” Harper said.

The man then tried to cash a check, and Harper’s boss flagged the check as bogus and called police.

Harper said the officer said, “‘Put your hands behind your back.’ Somebody said, ‘He got a gun.’”

Harper said she saw the officer tussle with the man, and the man pointed a gun at the store owner. “I was like, ‘No!’ and then he pointed it at the police.”

Police arrested Bonette Kymbrelle Meeks, 26, of Berkeley. He is charged with murder, armed criminal action and other crimes.

At the store on Monday, Harper was alone behind the counter, helping a steady stream of customers buy beer or cigarettes. A few of the customers told Harper she should take the day off. They said they backed her and know she meant well. One woman said she should delete her Facebook page so she doesn’t draw more criticism.

Harper has worked at the store 13 years. She said she knew the officer who was killed.

“I talk to everybody,” she said. “We joke with them, we play with them like they’re our uncle.”

Harper said she will never use Facebook Live again, unless it’s to explain to followers that she meant well. She didn’t want to do it on Monday because her face was swollen from crying.

“They need to shut it down because how I’m feeling right now. It changed my life in 24 hours,” she said of Facebook Live. “(I’m) asking for help and they took it in another situation.”

Her main concern, she said, is the family of the officer.

Harper said police took her to the station and questioned her for several hours Sunday night about what she had seen. She said she was back at work at 6 a.m. Monday when the store reopened.

She said people are threatening her on social media and when she answers the store phone.

“They are saying, ‘Kill yourself,’ or ‘I’m going to kill you,’” Harper said. “I’ve been hearing it since last night.”

The officer answered a call to Clay's Wellston Food Market Restaurant on Page Avenue about 4:30 p.m. About 5 minutes later, police got a call about an officer down. 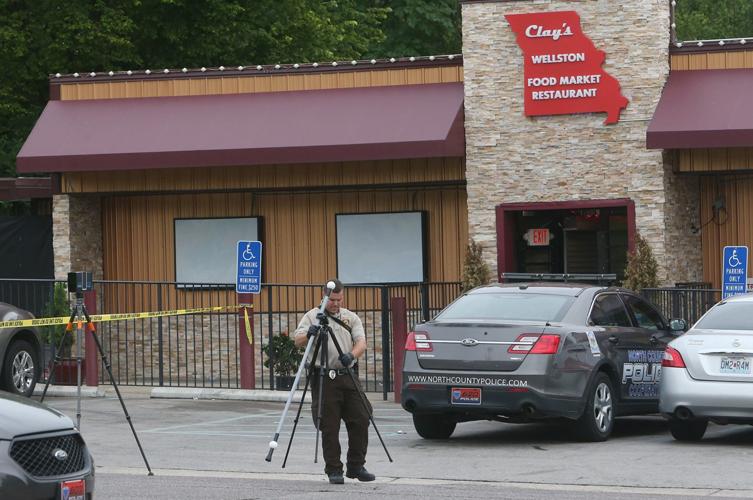 A St. Louis County crime scene investigator sets up cameras in front of Clay's Wellston Food Market Restaurant on Sunday, June 23, 2019, in Wellston at the scene where a North County Cooperative police officer was shot inside the market. Photo by J.B. Forbes, jforbes@post-dispatch.com 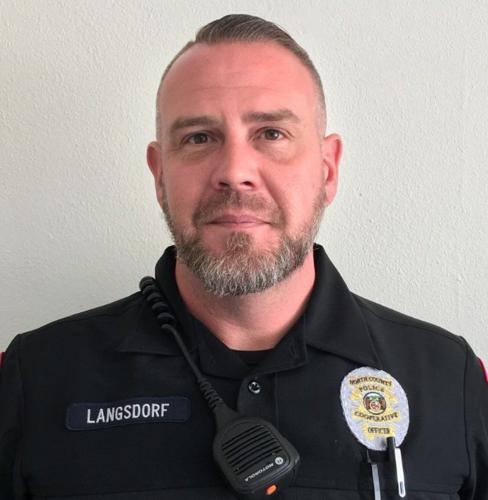