Missouri Highway Patrol troopers and construction workers talk on Tuesday, Nov. 10, 2020, at the scene on the St. Louis County side of the Missouri River after an apparent accidental fall by a worker from one of the spans of Interstate 70's Blanchette Memorial Bridge. It happened as a long-term renovation project on the bridge was close to completion. (Christian Gooden, cgooden@post-dispatch.com) 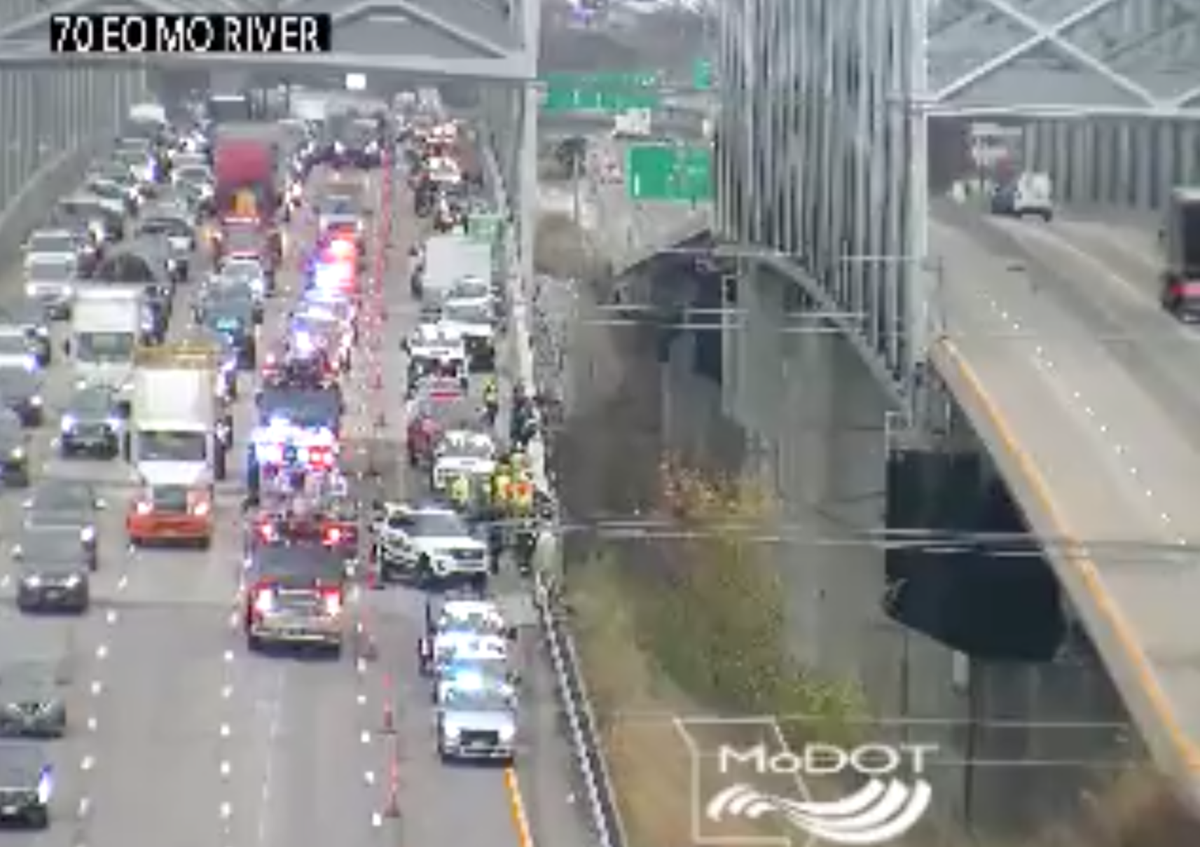 A MoDOT camera shows eastbound Interstate 70 at the Missouri River following an incident on the Blanchette Bridge on Tuesday, Nov. 10, 2020.

UPDATED at 2:30 p.m. Tuesday with more details about the victim.

ST. CHARLES — A construction foreman died Tuesday after he and his construction machinery fell about 75 feet from the Blanchette Memorial Bridge onto a sand embankment below.

Police identified the victim as Alan Jackson, 59, of Pevely. Jackson’s family said he was planning to retire this year after nearly 30 years in construction and wanted to travel in a camper with his wife.

Shaunda White, a spokeswoman for the Missouri Department of Transportation, said Jackson worked for KCI Construction Co. in St. Louis. The company was awarded a $33 million contract in January for the Blanchette Bridge rehab project on Interstate 70.

A spokesman for KCI could not be reached for comment.

Jackson was found unconscious inside the machinery about 8 a.m. Tuesday and rescuers performed CPR, said Cpl. Dallas Thompson of the Missouri Highway Patrol. Jackson later was pronounced dead at a hospital, Thompson said.

“He was in this piece of equipment and removing construction decking from underneath the bridge, and the weight shifted and the equipment fell off the bridge,” Thompson said.

He wasn’t clear what kind of machinery Jackson was in but aerial footage appeared to show that it was a mobile lift used to elevate workers or material.

Traffic on eastbound I-70 was backed up as police arrived on the scene. Thompson said there was not an auto accident on the bridge that caused the construction equipment to fall, as was initially believed. At first, rescuers asked for boats to search the Missouri River as the first reports were that someone had fallen into the river.

Thompson said investigators with the city of St. Charles and St. Louis County were investigating the incident.

Jackson’s oldest son, James Jackson, said his father had three adult children and four grandchildren. He was a lifelong resident of Pevely and a Marine, serving as a crew chief on a Huey helicopter.

“He was supposed to retire this year,” Jackson said of his father. “He had worked right around 30 years. (He) and my mom were planning to take their camper and travel the United States seeing different sights.”

Crews have been hired to replace expansion joints, repair parts of the bridge, seal the bridge deck and paint the eastbound part of the bridge. The span carries on average about 150,000 vehicles daily, according to MoDOT — more than any of the other St. Louis-area bridges that cross the Missouri River.

Missouri Highway Patrol troopers and construction workers talk on Tuesday, Nov. 10, 2020, at the scene on the St. Louis County side of the Missouri River after an apparent accidental fall by a worker from one of the spans of Interstate 70's Blanchette Memorial Bridge. It happened as a long-term renovation project on the bridge was close to completion. (Christian Gooden, cgooden@post-dispatch.com)

A MoDOT camera shows eastbound Interstate 70 at the Missouri River following an incident on the Blanchette Bridge on Tuesday, Nov. 10, 2020.