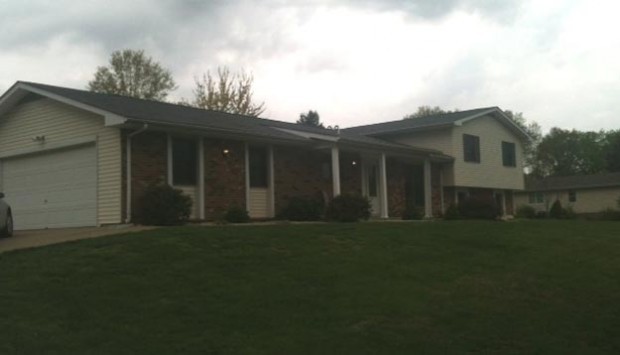 This March 29, 2012, photo shows the exterior of the Dardenne Prairie home where an intruder was shot and killed by the homeowner. 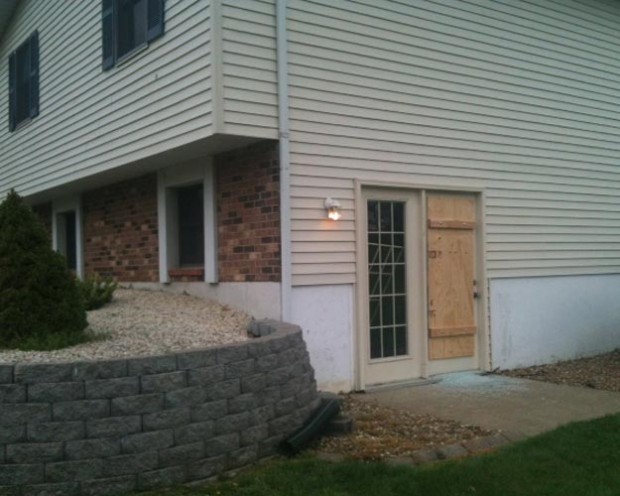 This March 29, 2012 photo shows the French doors where an intruder broke into the home and began assaulting an occupant before he was shot and killed. Post-Dispatch photo 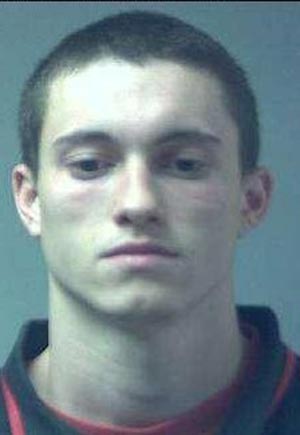 UPDATED at 3:28 p.m. with information from the suspect's girlfriend.

DARDENNE PRAIRIE• A Dardenne Prairie man shot and killed an intruder who broke into his home last night and started beating the man's wife, authorities said.

The home invasion appeared to be random, and the homeowners said they did not know the attacker, identified as William R. Carlton, 20, of the 2000 block of North Fourth Street in St. Charles.

The incident happened just after 9 p.m. in the 1600 block of Du Vall  Court, near Feise Road.  Carlton worked for an air duct and chimney sweeping business run out of a home next door to the one where the incident took place.  St. Charles County Sheriff's Department spokesman Lt. Craig McGuire gave this account:

The homeowners, Bob Lohman, 64, and his wife, Charlene Lohman, 57, were in the downstairs living room, watching television. Bob Lohman glanced over at the French-style doors, which lead to the yard, and saw a man looking through the doors at them. He got up to investigate, and a landscaping block flew through one of the windows on the doors, and then the doors flew open.

Carlton came into the house, grabbed Charlene Lohman, dragged her to the floor, and began beating her. Lohman tried to get Carlton off his wife, but couldn't. So Bob Lohman went upstairs and grabbed a .38 caliber revolver, went downstairs and warned Carlton several times to get off his wife. But Carlton didn't, so Lohman shot him once in the upper torso. He then pulled Carlton off his wife and called police.

Carlton was taken to an area hospital, and was pronounced dead soon afterward.

Bob Lohman, speaking briefly to a reporter at his front door this morning, said he and his wife were "pretty shook up" and his wife has bumps and bruises, but they are otherwise okay.

"Totally unexpected," he said.  "We had absolutely no idea who this guy was."

McGuire said it appears that the homeowners did nothing criminal. He said toxicology tests will determine whether the man was under the influence of drugs or alcohol. Detectives will turn over their investigation to the prosecuting attorney's office.

"This is some very irrational behavior," he said.  "It doesn't appear this is a simple burglary gone bad. They had the television on, the lights were on. The suspect can obviously look in and see there's people in the house."

Carlton worked for an air duct and chimney sweeping business based in a house next door to the Lohmans. Joe Mack, the neighbor and business owner, said Carlton was a good employee and he is "in awe" over what happened.

He said Carlton finished work at about 6:30 or 7 and was waiting in the shop's garage for his girlfriend to pick him up. The girlfriend came by at about 8:30, picked him up, and they pulled away, Mack said. What happened between then and the time of the home invasion is a mystery, he said.

"I would have never seen this coming," he said. He said he was sitting in his driveway with his wife and brother-in-law drinking a beer when the incident happened.

He said he didn't hear a thing.

"He was a young kid, he's had problems in the law, he's worked for me for a year and a half. I've taken him under my wing. Right now, I'm flabbergasted."

He said Carlton hadn't been drinking with them, and that this morning he checked the business' garage for evidence of drug or alcohol use but didn't find anything.

Carlton's girlfriend, Amber Branson, 21, said today that when she picked up Carlton he was "way too drunk" and that he hung out with everybody in the driveway talking for about 20 minutes before they left.    She said the brother-in-law had said something to Carlton about being disrespectful by being so drunk.  When Branson pulled up to the stop sign at Feise Road, Carlton got out of the car and said something about not wanting to be disrespected.   "He gave me a hug and a kiss, he didn't seem really angry," she said.

She thinks he wanted to go back to the house to confront the brother-in-law, but went to the wrong house.   She waited for him, she said, but about ten minutes later she heard police sirens.

She said she thought the homeowner overreacted by shooting him.

Mack, when told of Branson's version of the story, stood by his claim that Carlton had been hanging out in the garage and wasn't aware that he had been drinking.

The neighborhood is made up of homes about 30 to 40 years old on lots of about one to four acres each.  Neighbors said they haven't had any problems and are shocked by last night's events.

"This neighborhood is perfect," said Sandy Scott, who lives next door to the Lohmans. "We've never had any problem."

Carlton's criminal record included violations like driving without a license, driving with expired plates, and being a minor in possession of alcohol.

ST. LOUIS - A homeowner who shot and killed a burglar early Monday morning most likely will not be charged with a crime, police said, because …

This March 29, 2012, photo shows the exterior of the Dardenne Prairie home where an intruder was shot and killed by the homeowner.

This March 29, 2012 photo shows the French doors where an intruder broke into the home and began assaulting an occupant before he was shot and killed. Post-Dispatch photo