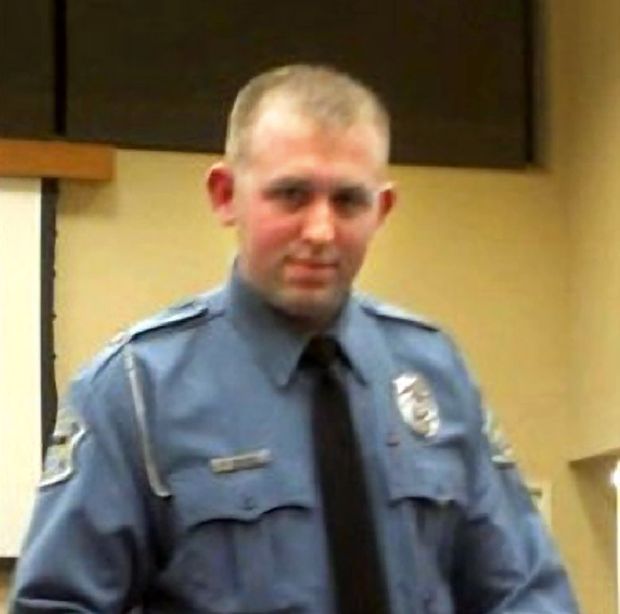 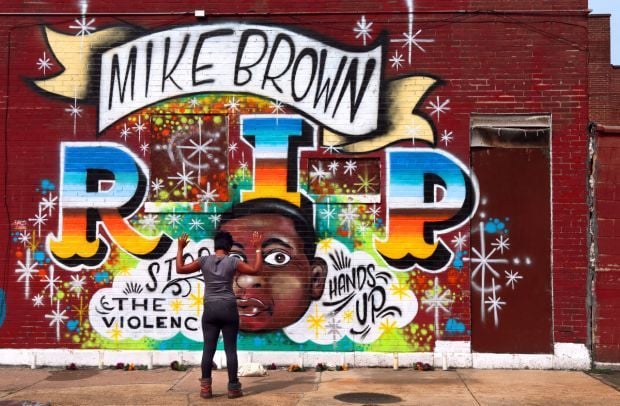 Lohgan Booker stopped to visit a mural tribute to Michael Brown painted by Joseph Albanese on the side of Signature Screenprinting at Union Boulevard and Cote Brilliante Avenue on Friday, Aug. 22, 2014. "I just want to let this man rest," said Booker. The screenprinting business co-owner Natasha Harris said that she was looking for a statement with a positive effect. "We respect the police, but we just want the violence to stop," said Harris. Photo by Robert Cohen, rcohen@post-dispatch.co

A spokesman for Prosecuting Attorney Robert McCulloch’s office, Ed Magee, refused to comment Wednesday on who had testified.

The shooting of Brown, 18, who was black and unarmed, by Wilson, who is white, gave rise to racially charged protests and looting. Some activists have threatened more of the same if the grand jury does not indict Wilson.

Police have said that Brown struggled with Wilson before being shot. Brown’s family and some witnesses have said Brown was surrendering when he died. Others who have spoken publicly said it was not clear what Brown was doing when he turned toward Wilson after fleeing from their initial encounter.

McCulloch has pledged to present every witness and every shred of evidence to let the grand jurors independently decide whether to indict Wilson, without the prosecutor making a recommendation. Magee has said that prosecutors will help witnesses navigate legal issues.

Veteran defense attorney John Rogers, who is not involved in this case, said Wednesday, “It’s unusual but not unheard of for a prosecutor to extend an invitation” for the target of an investigation to testify to a grand jury. He said he had rarely allowed it.

Witnesses cannot take their attorneys inside the grand jury chamber, although the witnesses may interrupt the proceedings to go outside for a consultation.

“You don’t always want to preview what your defense would be at such an early stage,” Rogers explained. He added, “I would only consider allowing my client to testify at a grand jury proceeding if I was convinced that the prosecutor presenting the evidence to the (grand jury) was convinced that his testimony would help them reach the decision not to indict.”

Attorney Chet Pleban, who is not part of this case but has represented a number of accused police officers, said that sworn grand jury testimony could be used in any state or federal prosecution, potentially exposing the witness to damaging questions.

“The problem in this case is, one way or the other, his story had to be told in order for this grand jury to know what was in his mind,” Pleban said. “And I don’t know any way to accomplish that other than to have him testify.”

Wilson must convince grand jurors that he acted in reasonable fear of death or serious injury, Pleban said, “And he’s pretty much the only one that can do that.”

Evidence is being presented to a grand jury that was empaneled before the shooting, with a term recently extended at the prosecutor’s request to Jan. 7. At one point, McCulloch had predicted a decision in October.

The pace remains uncertain, but Tiffany Mitchell, a witness to the shooting who has spoken publicly about what she saw, has not yet been subpoenaed, her attorney, Peter Cohen, said Wednesday.

McCulloch took the rare step of having audio recordings and a transcript made of the secret proceedings, with a promise to release them publicly if there is no indictment. Magee acknowledged that opening the material would require an order from a judge, who could say no.

Jim Cohen, an associate professor of law at Fordham University, told the Post-Dispatch last month that grand jury material had rarely been made public anywhere, even to scholars researching historical cases. He also worried that fear of being publicly identified might inhibit witnesses.

Magee said McCulloch’s office had talked about the potential effect on witnesses “a little bit” and “it’s still being discussed.” He said prosecutors could decide to withhold witness names, especially those who are not police officers and may have particular safety issues.

He said the names of the grand jurors would not be made public, and it was unclear whether documents would be released that necessarily would carry the foreperson’s signature.

Magee said the timing of the announcement of the grand jury’s decision, once it’s made, was “still being discussed.”

McCulloch urged on Aug. 13 that “anyone and everyone” with relevant information come forward. He said then: “Absolutely everything will be presented to the grand jury, every scrap of paper that we have, every photograph that was taken, every bit of physical evidence that has been gathered, every video clip, anything that we can get.”

“Every witness who has anything at all to say will be presented to the grand jury,” he promised.

Police kill man they say pointed rifle at them in Jennings

Police said the man grabbed a rifle and got in a foot chase with officers, and was shot when he pointed the gun at police.

St. Louis County Prosecuting Attorney Robert McCulloch said the complexity and volume of evidence are taking a lot of time.

Officer Darren Wilson failed to show up for a hearing Monday, putting one drug case — and possibly others — at risk.

Ferguson police officer told investigators that he struggled to keep his gun.

The extension does not necessarily mean the job will take that long, officials said.

Why was Michael Brown's body left there for hours?

As crowds gathered, investigators found a scene so volatile, so dangerous, it caught them by surprise.

Lohgan Booker stopped to visit a mural tribute to Michael Brown painted by Joseph Albanese on the side of Signature Screenprinting at Union Boulevard and Cote Brilliante Avenue on Friday, Aug. 22, 2014. "I just want to let this man rest," said Booker. The screenprinting business co-owner Natasha Harris said that she was looking for a statement with a positive effect. "We respect the police, but we just want the violence to stop," said Harris. Photo by Robert Cohen, rcohen@post-dispatch.co