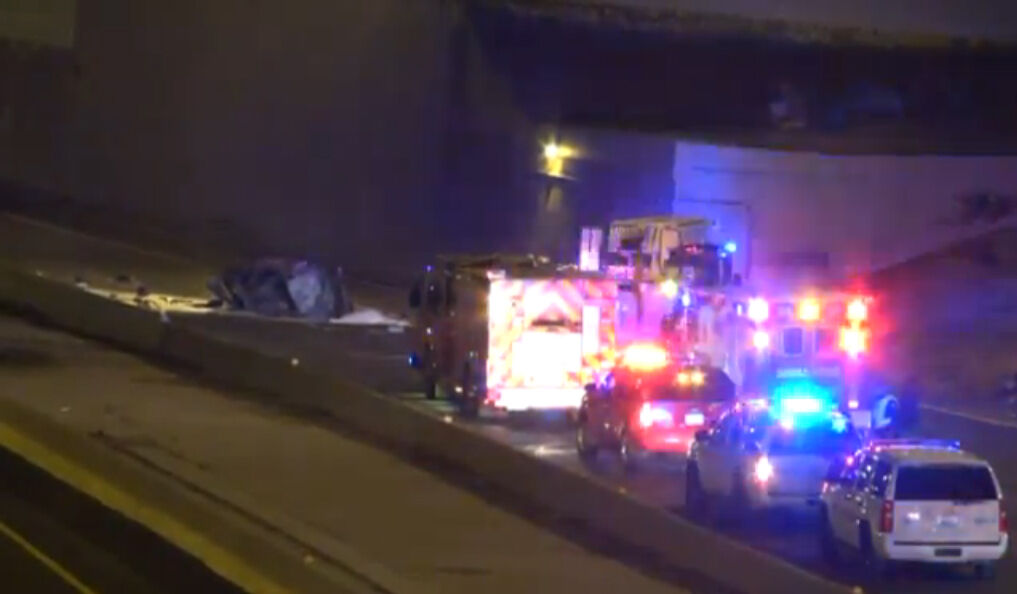 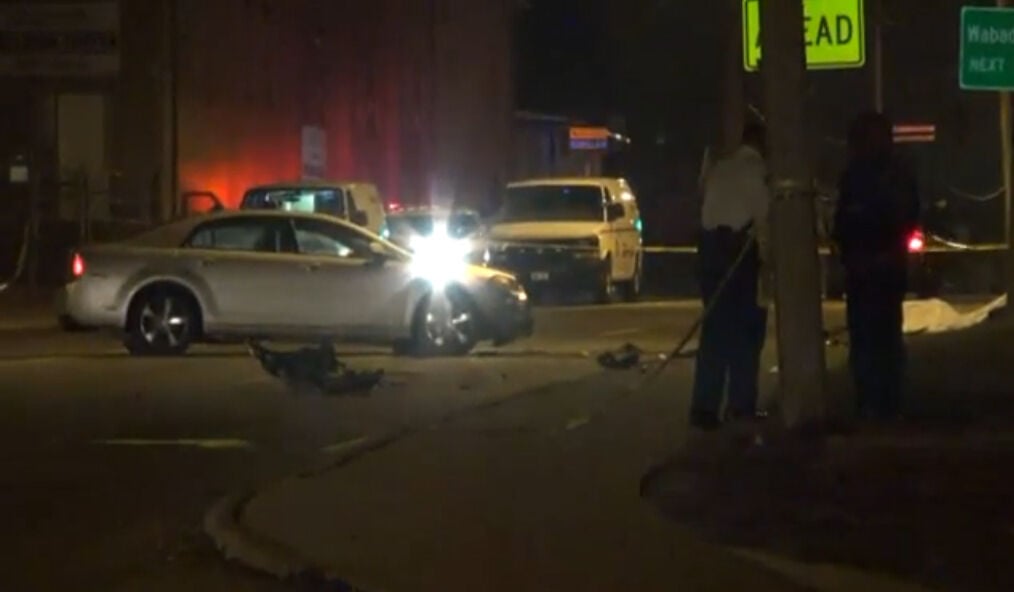 Police investigate after two pedestrians were struck and killed by a car at Kienlen and Evanston avenues in Wellston late on Tuesday, Jan. 27, 2015. Photo courtesy KTVI

At least five people were killed in separate vehicle crashes Tuesday night and Wednesday morning across the St. Louis region.

Two of the victims died when their car crashed and burst into flames on Interstate 70 north of downtown St. Louis. Two other victims were pedestrians walking along a sidewalk in Wellston who were fatally struck by a vehicle that had swerved to avoid an oncoming car.

The fifth person to die was driving on Interstate 55 when she rear-ended a tractor-trailer that blew a tire.

A sixth person survived after he lost control of his car and hit an oncoming fuel truck on the McKinley Bridge, but he was critically injured. The crash closed the bridge for several hours.

Here is a rundown of the crashes:

The I-55 crash was the first, about 10:30 p.m. Tuesday. Erin L. Nabe-Jenkins, 32, of Imperial, was killed when her car slammed into the back of a tractor-trailer in the northbound lanes of the interstate near Butler Hill Road.

According to the Missouri Highway Patrol, rear tires blew out on the truck. Its driver tried to make it to the shoulder. Nabe-Jenkins was not paying attention to the truck, police say, and the front of her 2010 Dodge Avenger struck the back of the truck. She was pronounced dead at 11:08 p.m.

In the second deadly crash, a man and a woman walking along a street in Wellston were struck and killed about 11:30 p.m. Tuesday, police said. It happened near the intersection of Kienlen and Evanston avenues. Wellston Police Lt. Chris Clay said the victims appeared to be in their 20s. Their names have not been released.

St. Louis County Police Sgt. Brian Schellman said a woman, 19, was driving south on Kienlen when she swerved to avoid an oncoming car. She lost control and struck the two pedestrians on the sidewalk.

Schellman said the motorist had not been arrested.

In another fatal crash, two female victims died on Interstate 70 in St. Louis when a car went off the road, flipped over and back onto the road, then burst into flames. It happened just after 2 a.m. north of downtown, near the Madison Street overpass. Police said the car, a Grand Prix, was traveling at high speed when the driver lost control. The car hit a guardrail and concrete wall before flipping.

One of the victims was thrown from the car. Both were pronounced dead at the scene. Police have not yet identified the two victims.

On Wednesday, police in Venice were investigating a serious crash that closed the McKinley Bridge for several hours.

A man in his early 30s was critically injured about 2 a.m. Wednesday. He was driving east across the bridge when he struck a guardrail and veered into the westbound lane, colliding with an oncoming tractor-trailer that was hauling fuel.

A detective with the Venice Police Department said the victim had been taken by medical helicopter to St. Louis University hospital, where he was listed in critical condition.

The bridge was closed until about 7 a.m. while crews cleared debris and investigators did their work.

Pedestrians killed in Wellston are identified

The two were walking on a sidewalk when struck by a car.

The car crashed on Interstate 70 north of downtown St. Louis on Jan. 28.

St. Louis officials examining intersection after third pedestrian is killed there since 1998

Officers caught two men in downtown after a brief chase and arrested them without incident.

Police investigate after two pedestrians were struck and killed by a car at Kienlen and Evanston avenues in Wellston late on Tuesday, Jan. 27, 2015. Photo courtesy KTVI