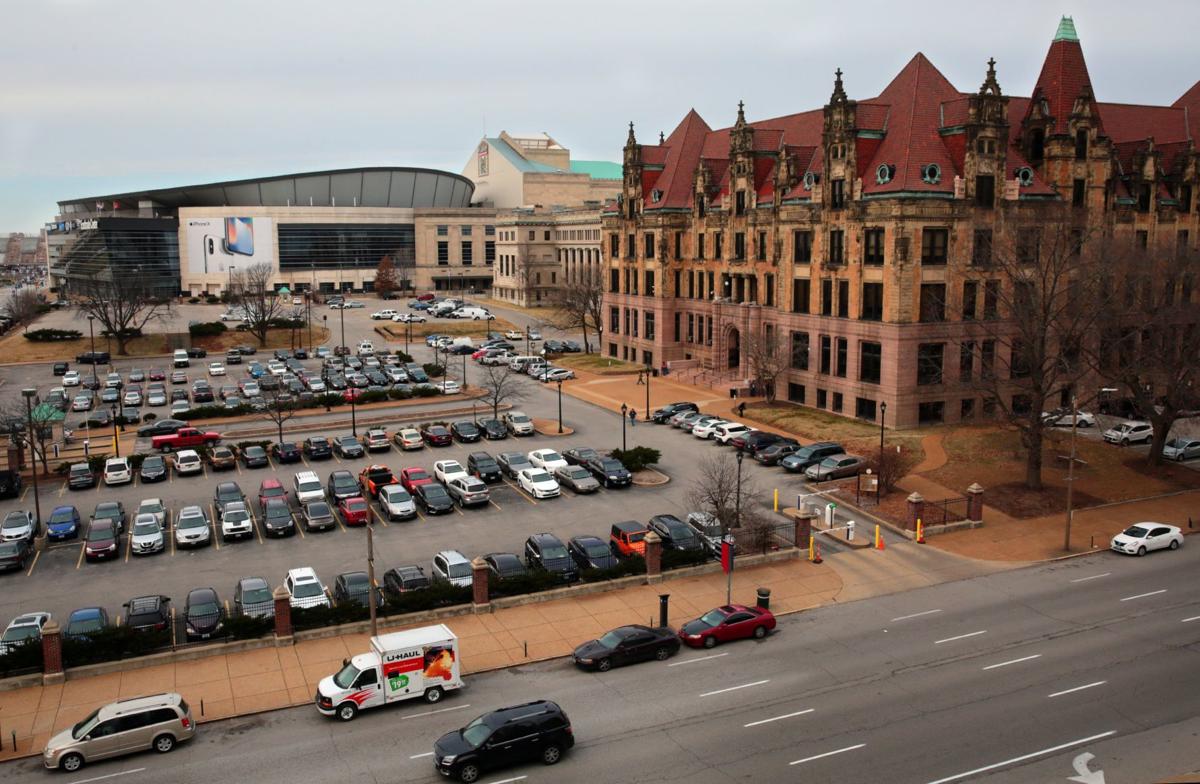 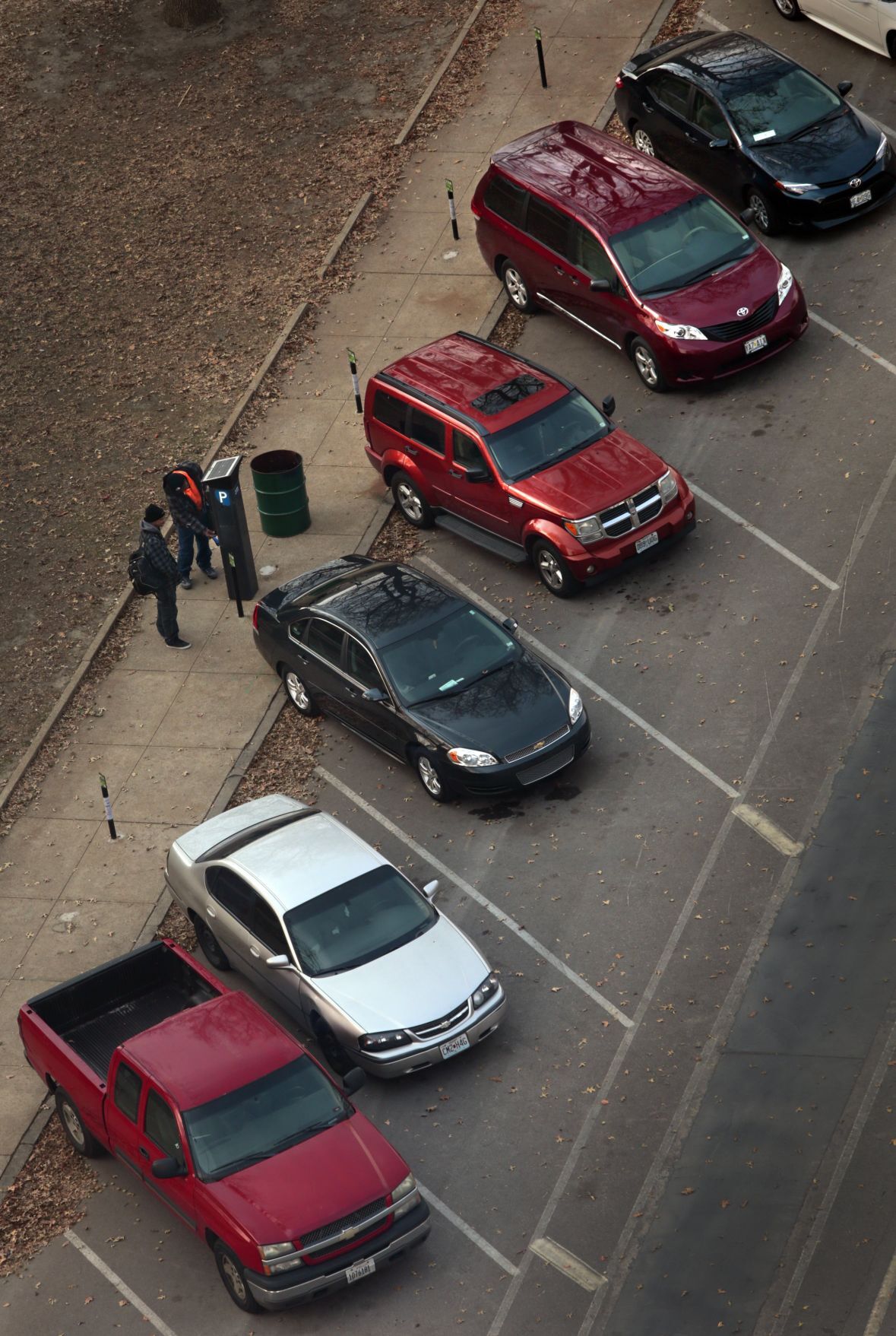 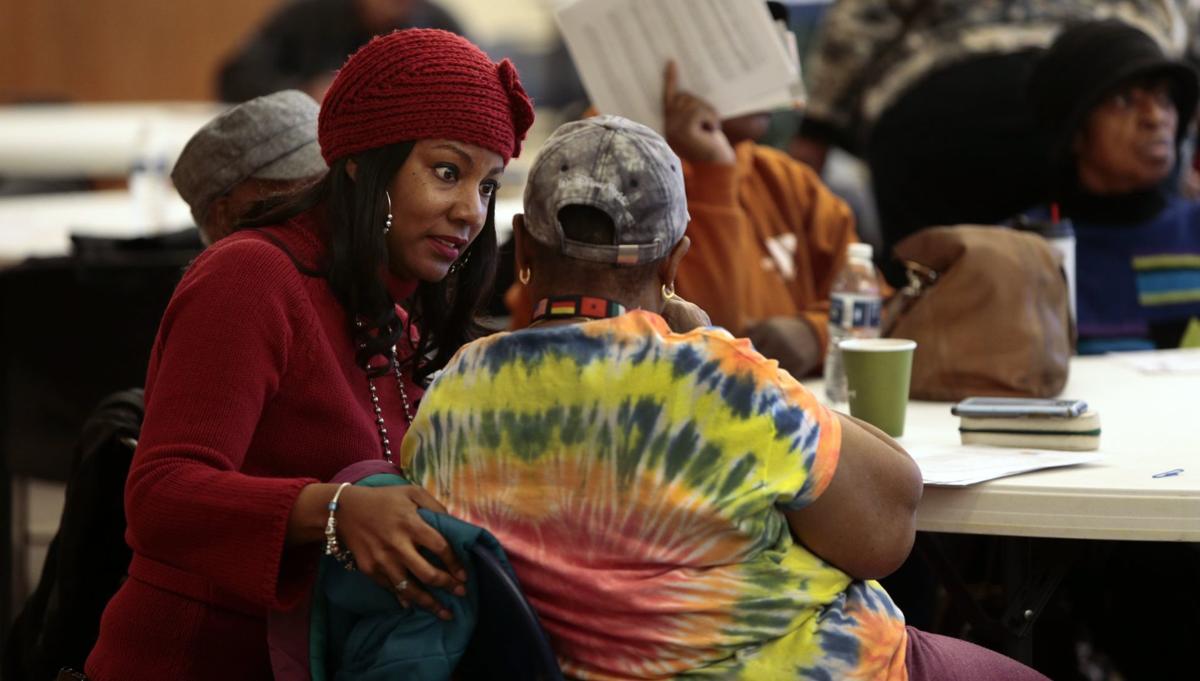 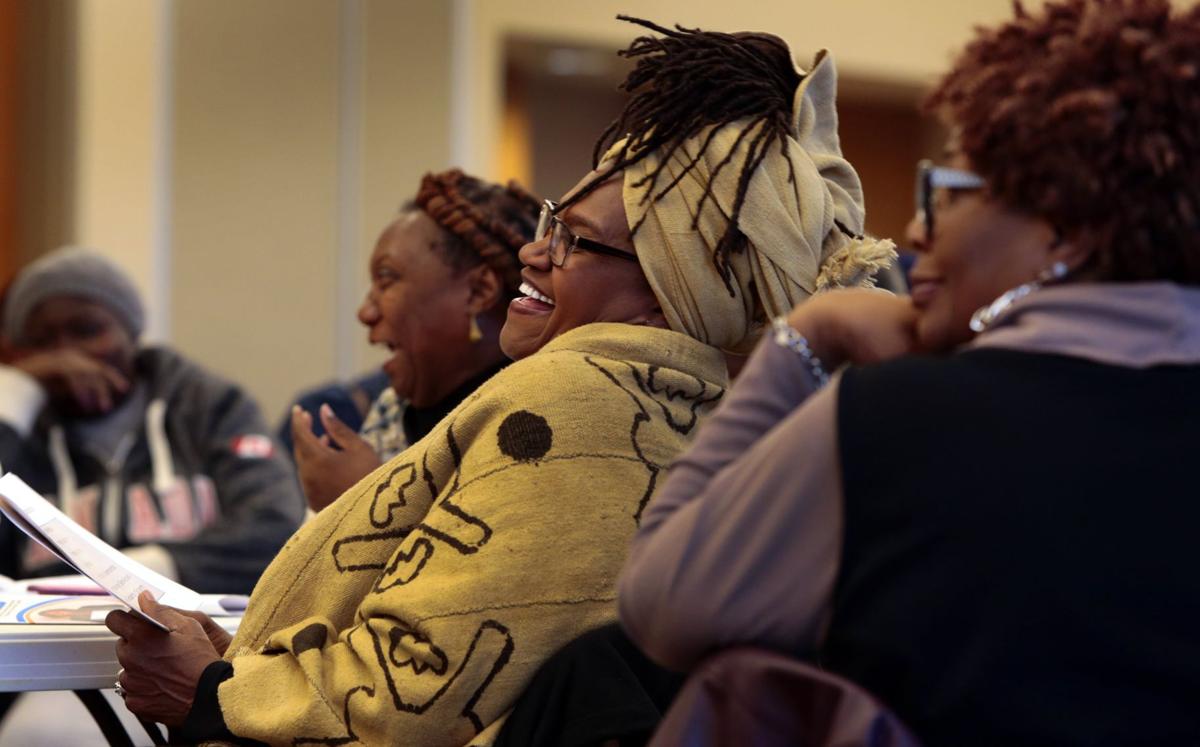 Anita Williams hears a story of a romance scam during a workshop on preventing elder fraud abuse at the O'Fallon Park YMCA on Friday, Dec. 15, 2017. The workshop, held during a meeting of the Active Older Adults senior group, was hosted by the city treasurer's Office of Financial Empowerment, which seeks to help people better manage their money. A representative of Wells Fargo Advisors led the discussion. Photo by Robert Cohen, rcohen@post-dispatch.com 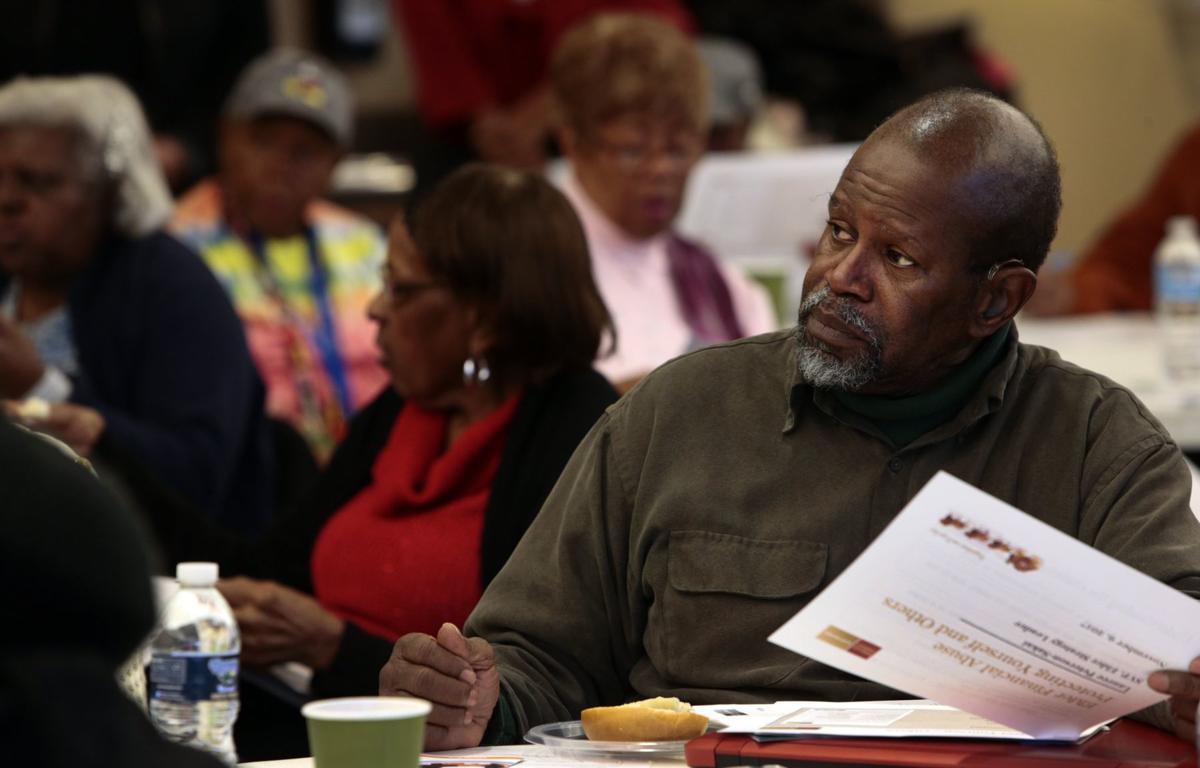 Eugene Williams listens in on a workshop on preventing elder fraud abuse, held at the O'Fallon Park YMCA on Friday, Dec. 15, 2017. The workshop, given during a meeting of the Active Older Adults senior group, was hosted by the city treasurer's Office of Financial Empowerment, which seeks to help people better manage their money. A representative of Wells Fargo Advisors led the discussion. Photo by Robert Cohen, rcohen@post-dispatch.com

ST. LOUIS • In the late 1980s, then-Alderman Fred Wessels wondered why so little of the money from parking meters and tickets in St. Louis was making its way to city coffers. The majority of the cash, he realized, went into the city’s parking division, which is under the purview of the city treasurer.

Wessels introduced bills to change the system, but they didn’t make it to a full vote, he said. He made an unsuccessful bid to become treasurer himself and even filed a lawsuit against the city and former Treasurer Larry Williams to challenge the constitutionality of St. Louis’ parking operations.

Wessels now represents part of the city in the Missouri House of Representatives. And St. Louis elected a new treasurer in 2012, Tishaura Jones.

But the debate over how much money the St. Louis treasurer controls, and whether it belongs in the general revenue fund, has been reignited with a new lawsuit. Alderman Jeffrey Boyd, 22nd Ward, is suing the treasurer and arguing that parking operations belong under city control.

The players may be different, Wessels said, “but this game has been played for 30 years.”

Some St. Louis aldermen have fought to tap into the parking division’s millions in reserve funds, which Jones says is necessary for her office to maintain a strong credit rating and insure more than $60 million in outstanding debt from modernizing the parking meter system and building parking garages.

Jones also points to a state law dictating that the treasurer must transfer to the city government no more than 40 percent of the parking meter fund’s net revenue after all payments for capital improvements and debt service have been made.

In the most recent fiscal year, that calculation came out to $1.68 million for the city. Total operating revenue from parking meters, violations, city-owned garages and lots and rental property for fiscal 2017 was roughly $18 million before any expenses were paid, according to a recent audit of the parking division, which Jones posts on her website annually.

The Board of Aldermen has since passed legislation in an attempt to adjust how the city share is calculated, hoping to increase the payment. Supporters cited a dire need for more revenue to pay for essential city services. But Jones questions the legality of the move.

“We’re governed by the state. I’m a former legislator,” Jones told the Post-Dispatch in an interview. “You can’t make changes to the state law from a local office. Local government exists at the pleasure of the state.”

As treasurer, Jones oversees millions of taxpayer dollars as the city’s chief investment and cash management officer. She’s also manager of the city’s parking division. The oddity of the arrangement is something Jones readily acknowledges.

“I’ve done the research. I haven’t found another city treasurer that does parking,” Jones said.

The job grew even more powerful and its duties vastly expanded in the 1990s, when Larry Williams successfully lobbied the state Legislature for bonding authority. He went on to create an empire of jobs, parking meters and garages.

But to fully understand how the office operates, you have to go back to 1876, when St. Louis opted to separate from St. Louis County in what’s known colloquially as “The Great Divorce,” said Terry Jones, an expert on metropolitan government at the University of Missouri-St. Louis. He has no relation to Tishaura Jones.

Ever since, St. Louis has operated as both a city and a county, making for an unusual governmental structure. The dual status means that while St. Louis isn’t technically a county, it has to perform county functions.

One such law creates the Parking Commission. Another tasks the treasurer of “any city not within a county” — St. Louis — with supervising it.

A lawsuit that’s been moving steadily through the courts since January questions whether the Parking Commission of St. Louis should even exist under Missouri’s constitution. In August, a member of that commission — Jeffrey Boyd, who heads the board’s streets, traffic and refuse committee — became a plaintiff suing the state and the city. Another plaintiff in the suit is James J. Wilson, the former city counselor under Mayor Vincent C. Schoemehl Jr.

“In most of the country, the parking division is part of the municipal government. This is a great opportunity to correct a system that’s broken,” Boyd said.

In the meantime, the body tasked with overseeing all public parking in St. Louis hasn’t met since June, and likely won’t until the legal process runs its course, on the advice of Jones’ attorneys, and to the chagrin of Boyd.

He cites the same measure passed by the board to increase the amount of parking revenue Jones must turn over to the city, which he sponsored. It includes a provision requiring monthly meetings of the Parking Commission, unless a majority on the commission approves a cancellation or rescheduling. Suspending meetings indefinitely violates that law, he argues.

Wessels made a similar case when he sued Williams in 2012, over Williams’ decision to outsource parking services.

Both that lawsuit and the one brought in 2017 were filed by St. Louis attorney and former assistant city counselor Elkin Kistner. They claim that statutes creating the Parking Commission and deeming the city treasurer the supervisor of parking violate an article in the state constitution that states: “No law shall be enacted creating or fixing the powers, duties or compensation of any municipal office or employment, for any city framing or adopting its own charter under this under this or any previous constitution.”

Wessels voluntarily dismissed his lawsuit when former Mayor Francis Slay appointed him director of the city’s Community Development Administration. But his feelings on the matter haven’t changed.

Kistner argues that there’s also practical reason for invalidating the parking statutes, and not just a constitutional one: The city is strapped for cash.

“Let’s get these monies in the hands of people who were elected by the city to craft its budget,” Kistner said. “The treasurer is not elected to make decisions with what to do with excess money.”

Jared Boyd, Jones’ chief of staff, who is not related to Jeffrey Boyd, said the nature of the lawsuit’s claims lacked merit, and that the office has consistently given the city the maximum 40 percent of the parking revenue under state law.

Beyond that, the office has funded the North-South MetroLink study, economic development projects and was willing to help pay for Scottrade Center renovations, Jones says.

She has also questioned if the lawsuit is politically motivated, alleging that Jeffrey Boyd has long had a personal vendetta against her. They ran against each other for treasurer in 2012, and again for mayor this year.

Jeffrey Boyd has pushed back on that accusation.

“Even though I’m the alderman for the 22nd Ward, I make decisions that govern the whole city of St. Louis,” he said. “And everybody else that complains it’s personal, I feel those are people who are just crying. Change is difficult when you’re used to doing things your way.”

But it feels personal to Jones, she says, citing aspects of the lawsuit that go after programs she created within her office, such as the College Kids Children’s Savings Account Program, providing college savings accounts to all kindergarten students in St. Louis Public Schools.

Accounts are opened with $50 in seed money provided by residual revenue from the city’s parking division.

“We recently reached a huge milestone with 10,000 children now in the program,” Jones said. “If the court sides with Jeffrey Boyd, that program ceases to exist. So if he wants to be the one responsible for taking away college accounts of 10,000 schoolchildren, that’s something he’s going to have to sleep with every night.”

The suit challenges the validity of that program, as well as Jones’ Office of Financial Empowerment, which offers free financial literacy classes and counseling and was modeled after similar operations within the city treasurer offices in Chicago and San Francisco.

Created by a city ordinance in 2014, the financial empowerment office continues to grow with new programs and partnerships, including a home mortgage program for city employees, an alternatives to payday lending guide, credit counseling, utility and rent or mortgage assistance, student loan counseling and money management seminars.

“I have a firm belief that the efforts our office is involved in have a direct correlation to reducing poverty. And poverty is the father of crime. You reduce poverty, you reduce crime,” Jones said.

But the office itself is beyond the scope of the city treasurer’s responsibility, Kistner said.

“If you look at the statutes that create the treasurer’s office, there’s no contemplation that the treasurer is going to provide social welfare functions. It’s just not there,” he said.

“They claim that state laws that deal with the parking division limit our ability to fund the Office of Financial Empowerment. At the same time, they’re arguing those same statutes are invalid,” Boyd said.

Anita Williams hears a story of a romance scam during a workshop on preventing elder fraud abuse at the O'Fallon Park YMCA on Friday, Dec. 15, 2017. The workshop, held during a meeting of the Active Older Adults senior group, was hosted by the city treasurer's Office of Financial Empowerment, which seeks to help people better manage their money. A representative of Wells Fargo Advisors led the discussion. Photo by Robert Cohen, rcohen@post-dispatch.com

Eugene Williams listens in on a workshop on preventing elder fraud abuse, held at the O'Fallon Park YMCA on Friday, Dec. 15, 2017. The workshop, given during a meeting of the Active Older Adults senior group, was hosted by the city treasurer's Office of Financial Empowerment, which seeks to help people better manage their money. A representative of Wells Fargo Advisors led the discussion. Photo by Robert Cohen, rcohen@post-dispatch.com