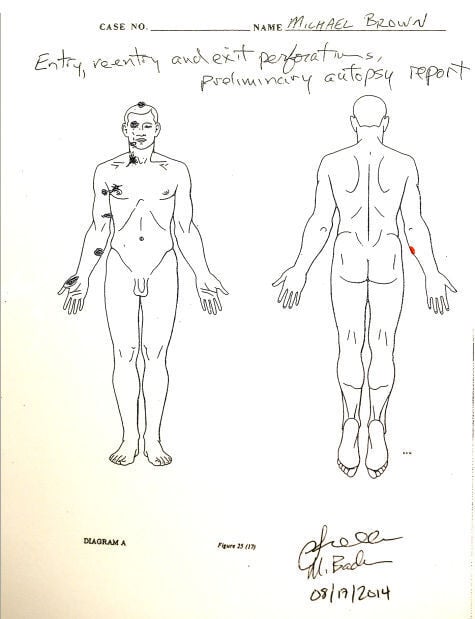 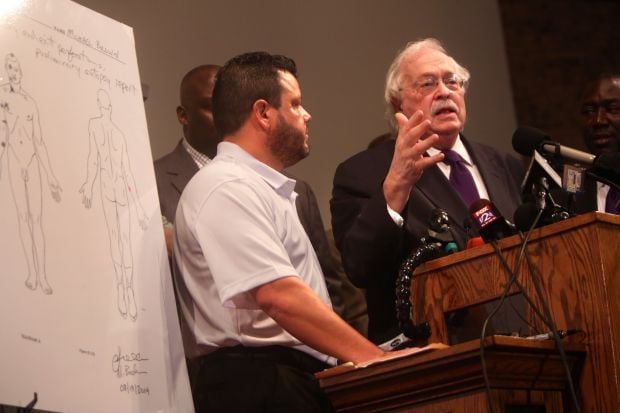 Dr. Michael Baden (right), a forensic pathologist, and Shawn Parcells, who assisted Baden, discuss the results of their autopsy of Michael Brown during a press conference at Greater St. Mark's Family Church in north St. Louis County on Monday, Aug. 18, 2014. They were hired by Brown's family to conduct a second autopsy after the completion of an autopsy by St. Louis County authorities. Photo by Cristina Fletes-Boutte, cfletes-boutte@post-dispatch.com

FERGUSON • A police officer’s bullet that killed Michael Brown here 10 days ago, igniting protests around the country, entered the top of the teen’s head as he was bent over or falling down, a private autopsy performed for Michael Brown’s family says.

The autopsy couldn’t say, however, whether the unarmed teenager was retreating, charging or if he had his hands up when he was killed, a claim that has become a central rallying cry of protesters demanding justice in cities across the United States.

Brown, 18, of Ferguson, was shot at least six times, including twice in the head, according to the autopsy performed by Dr. Michael Baden, a former New York City medical examiner who has investigated numerous high-profile cases. Baden said one bullet, which was likely the fatal shot, entered in the top of Brown’s skull. Another hit just above his right eye, exited near the eye, re-entered his face, exited near his jaw and then ended up in Brown’s upper chest or shoulder. Brown suffered four other gunshot wounds to his right arm and palm.

The family’s autopsy, performed Sunday at Austin A. Layne Mortuary in Jennings, leaves unanswered questions and differs slightly from what few details have been released about the autopsy conducted by St. Louis County’s medical examiner, Dr. Mary Case. Her office, so far, has said only that Brown died of gunshots to the head and chest, and would not comment further on Baden’s preliminary findings of his belief that only the shot to the top of the head would have been fatal.

It’s not clear how far Brown was from Ferguson Officer Darren Wilson when the officer opened fire. Baden found no gunshot residue, which would indicate an extremely close-range shot, on Brown’s body. But Baden didn’t have access to Brown’s clothing, which is still being held by St. Louis County police.

Baden said given what he knows, the shots could have been fired from at least 1 or 2 feet away or much farther.

“It could be 30 feet away,” he told reporters Monday.

Baden said he found no injuries that would indicate a struggle with Wilson, 28, of Crestwood, who police say fatally shot Brown about noon Aug. 9 in the Canfield Green apartment complex. Obtaining Wilson’s hospital records will be crucial in concluding whether they fought before the shooting.

Baden said Monday that Brown had some abrasions on the right side of his face, which Baden believes were caused by Brown falling to the pavement.

Ferguson Police Chief Thomas Jackson has said Wilson suffered facial injuries in a struggle, but police haven’t provided a clear picture of how Brown was shot.

Dorian Johnson, 22, may be the closest witness to the shooting. He has told media that he and Brown were walking in the street when the officer pulled up and ordered them to “get the F on the sidewalk” and grabbed Brown by the throat. Johnson disputed a description of the encounter by St. Louis County Police Chief Jon Belmar that Brown had reached into the car and tried to grab Wilson’s gun.

Shawn L. Parcells, who operates a forensics company based in Kansas, assisted Baden during the more-than-three-hour autopsy Sunday. Parcells, who joined Baden Monday to discuss their findings, said the autopsy showed Brown could have had his back the shooter or he could have been facing the shooter with his hands above his head or in a defensive position.

“While the shot could have come from the back,” Parcells said. “The arm is a very mobile part of the body, so it also could have occurred when he was putting his hands up ... We don’t know.”

Parcells said the forensics could not explain the order of the six gunshots but he speculated that the two shots to the head were the last because Brown was “bending over as he was coming down.”

The Brown family’s lawyer, Benjamin Crump, said the private autopsy “verifies that the witness accounts were true” and that the family “could not trust what was going to be put in those reports” by St. Louis County.

Baden said he consulted with the St. Louis County medical examiner before doing his autopsy, and he believes his findings will be consistent with Case’s results. He said Case is “a very excellent forensic pathologist, and I’m sure her work will turn out to be very excellent when it’s released. But it hasn’t been released yet, and the family wants to know.”

Baden has often been labeled a celebrity medical examiner for hosting TV documentaries and the HBO series “Autopsy.” He is a nationally noted pathologist who testified in the high-profile triple murder trial of Christopher Coleman, convicted of strangling his wife and two children in their Columbia, Ill., home in 2009. Baden spent 25 years in the medical examiner’s office in New York City.

Parcells was featured in a 2013 Post-Dispatch story in which some coroners and medical examiners in Missouri said Parcells had embellished his qualifications and performed autopsies without a license. Case was among several outspoken critics of Parcells, suggesting his working without a license was “a huge atrocity, an invitation to disaster” that could have jeopardized criminal cases.

Parcells denied any improper behavior to the Post-Dispatch.

A spokesman for St. Louis County Prosecuting Attorney Robert McCulloch, said a grand jury could hear evidence in the case of Brown’s death as early as Wednesday.

The night's tally included 2 people shot, 2 fires and 31 arrests including some from as far as New York and California.

Canfield Green resident tells details of what he saw Aug. 9.

Shawn Parcells made national news in 2014 after he helped with the private autopsy of Michael Brown, who was killed by a Ferguson police officer.

Dr. Michael Baden (right), a forensic pathologist, and Shawn Parcells, who assisted Baden, discuss the results of their autopsy of Michael Brown during a press conference at Greater St. Mark's Family Church in north St. Louis County on Monday, Aug. 18, 2014. They were hired by Brown's family to conduct a second autopsy after the completion of an autopsy by St. Louis County authorities. Photo by Cristina Fletes-Boutte, cfletes-boutte@post-dispatch.com