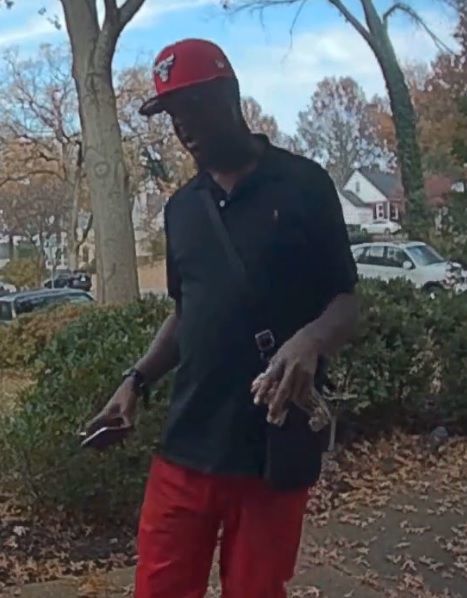 A doorbell camera captured video of man who is the suspected of forcing his way into a home in Glendale, Missouri, on Saturday, Nov. 16, 2019. Photo courtesy of Glendale Police Department. 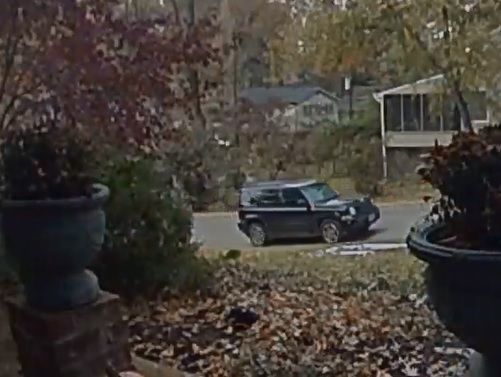 Police in Glendale, Missouri, say the suspect in Saturday's home invasion drove this black Jeep Patriot when he approached another resident nearby on Nov. 16, 2019. Photo courtesy of Glendale Police Department. 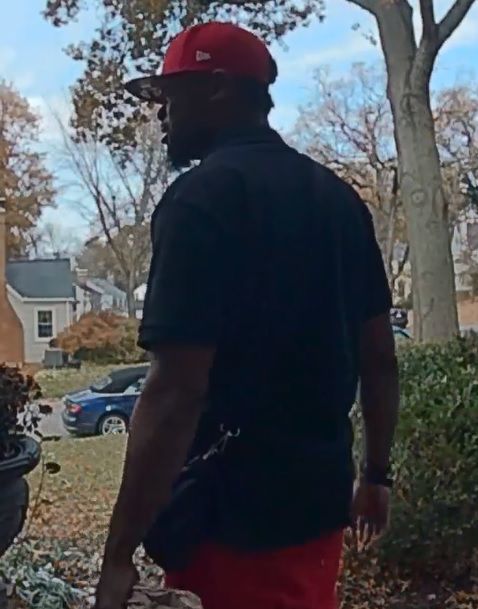 The suspect in the Glendale home invasion from Saturday, Nov. 16, 2019, was seen on a doorbell camera at a home nearby. Photo courtesy of Glendale Police Department.

GLENDALE — The gunman who forced his way into a Glendale home Saturday was seen an hour earlier approaching another man's door, and police say they now have video of the suspect from a doorbell camera.

In both cases, the suspect claimed he was looking for his lost dog, said Glendale police Capt. Bob Catlett .

The home-invasion was occurred about 2 p.m. Saturday in the 700 block of Bismark Avenue. The man asked to use a homeowner's telephone, then forced his way into the home at gunpoint, stealing cash and jewelry, police said.

The resident wasn't hurt, but the gunman made the resident and the resident's wife lie on the ground while he fled. The couple's 4-year-old child was asleep in the family's car outside but unharmed, police said.

An hour earlier, the same man was spotted less than a mile away, in the 800 block of Glen Elm Drive, Catlett said. The man didn't force his way into that home, though. He stood on a porch, where he said he thought someone stole his dogs. The resident told the stranger he should call police, and the man left.

Police showed the doorbell video to the victims of the home-invasion on Bismark, and they confirmed that it was the same man who forced his way into their home, Catlett said.

Smart home security systems have helped police zero in on suspects in other crimes. In a growing tactic nationwide, police are encouraging residents and businesses to let police departments know if they have cameras monitoring their property.

Registering cameras with the police is voluntary, and even after registration, residents are not required to share footage with police. In addition, police do not have access to the cameras to watch crime, or life, as it happens — aspects lauded by civil liberties groups in communities that have registration programs across the country.

Glendale has such a community camera registration program. Glendale, a suburb of nearly 6,000 residents next to Kirkwood, had two burglaries and six assaults in 2018, according to the Glendale Police Department's most recent annual report.

The suspect is black, about 5 feet, 9 inches or 5 feet, 10 inches tall and has tattoos on his neck. He has some facial hair and is in his mid to late 20s, police said. He wore a black polo shirt, red pants and what appeared to be a Chicago Bulls ballcap; he also wore dark-colored shoes and carried a satchel.

He drove a black Jeep Patriot away from the scene of the encounter on Glen Elm, police said.

Catlett, Glendale's assistant chief of police, offered this advice for residents: "If you don't know who is at your door, don't answer it right away. If you feel uncomfortable, call police so we can check it out."

The robbery on Bismark began when the man knocked on the door. The man who lives there was in the basement, watching television. He heard someone at the door and went to answer it. His wife was in another room. The couple's 4-year-old child had fallen asleep in the car, and they had left the child there, undisturbed.

When the man answered his door, the stranger in the red ballcap "said he was new in the neighborhood and his dog got out," Catlett said. He asked to use the phone, then pushed his way inside with a gun.

"This is a robbery," the gunman told the resident, Catlett said.

The man demanded cash, jewelry and weapons. He got cash and jewelry, but the residents didn't have weapons, Catlett said.

Meanwhile, police are investigating sightings of a man matching the suspect's description elsewhere.

George Fero of Lebanon, Illinois, said the same man came to his front door in September, wearing a Bulls cap and talking about a lost dog. Fero's wife answered the door.

"Have you see a baby pitbull dog running around?" the man asked her.

Fero said his doorbell camera videotaped the man. "He kept looking down at stuff on our porch," Fero said. "We think he was following the Amazon delivery truck."

There was no confrontation, and the man left in a black Jeep, Fero said. The man also was casing a neighbor's home the same day, Fero said.

Fero gave his video to Glendale police on Monday. "Maybe they can catch him," Fero said.

Glendale police said they have shown it to their victim, who said the man on the Lebanon video looked and sounded very similar, Catlett said. Catlett said police are working several promising leads.

The suspect knocked on the front door and asked to use the resident's phone, then pushed his way inside.

A doorbell camera captured video of man who is the suspected of forcing his way into a home in Glendale, Missouri, on Saturday, Nov. 16, 2019. Photo courtesy of Glendale Police Department.

Police in Glendale, Missouri, say the suspect in Saturday's home invasion drove this black Jeep Patriot when he approached another resident nearby on Nov. 16, 2019. Photo courtesy of Glendale Police Department.

The suspect in the Glendale home invasion from Saturday, Nov. 16, 2019, was seen on a doorbell camera at a home nearby. Photo courtesy of Glendale Police Department.