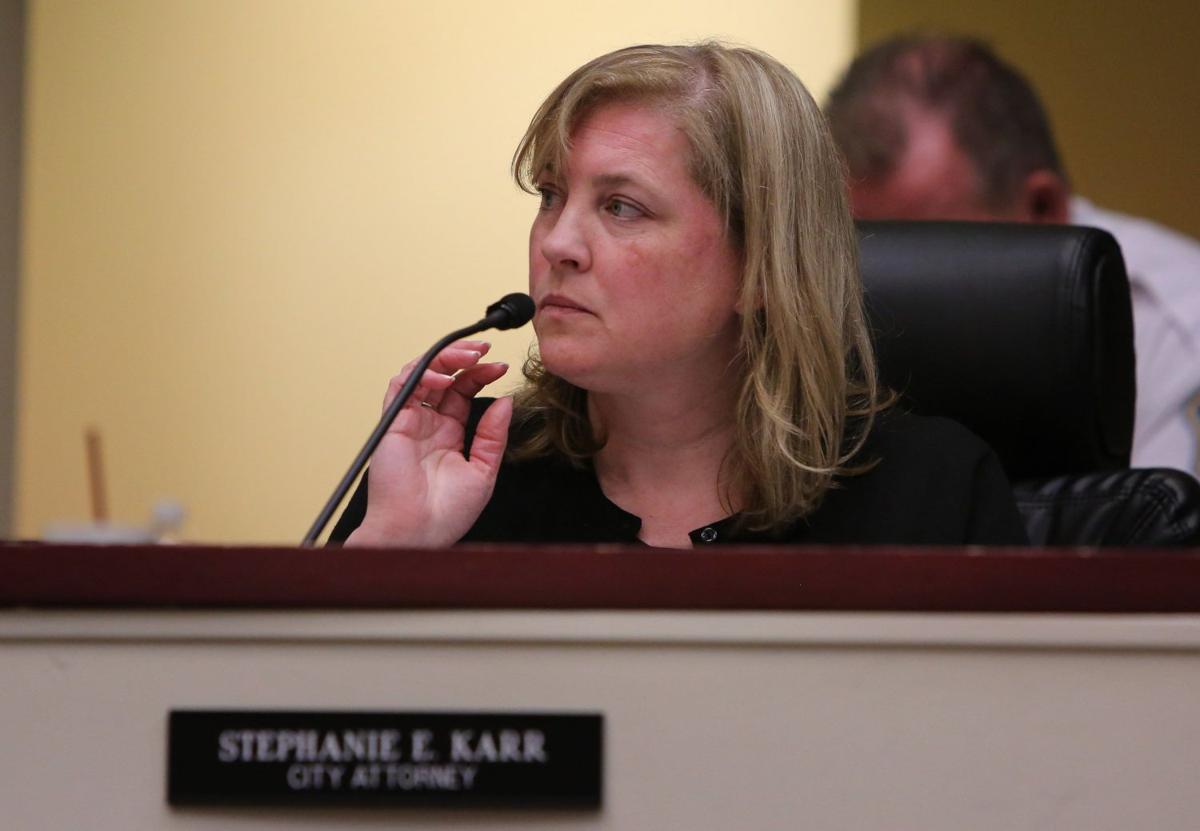 Ferguson city attorney Stephanie Karr talks about the proposed consent decree between the City of Ferguson and the U.S. Department of Justice during a meeting of the city council in Ferguson on Tuesday, Feb. 2, 2016. Photo by David Carson, dcarson@post-dispatch.com 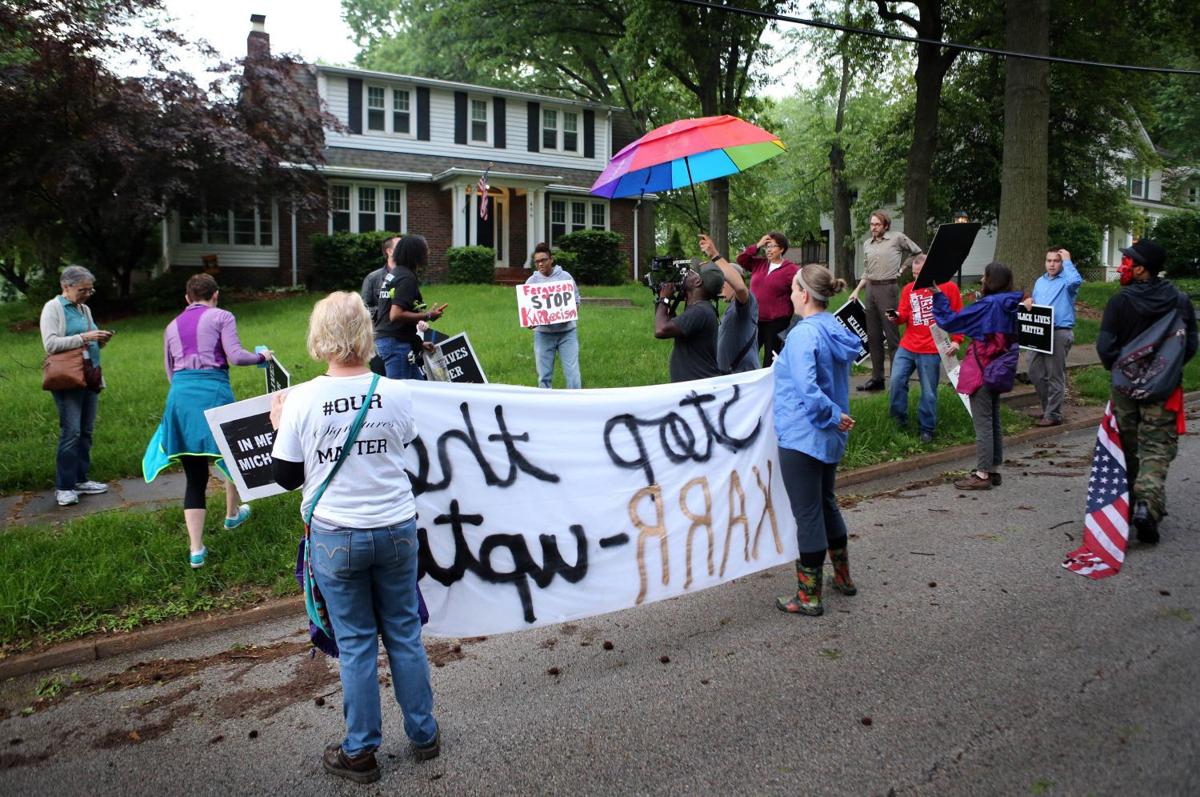 Protesters stand outside of a home where they believe Ferguson city attorney and prosecutor Stephanie Karr lives in Ferguson on Monday, May 9, 2016. Protesters are upset because they feel Karr has acted unjustly as a prosecutor. The protesters chanted and blocked traffic on the residential street for about 30 minutes. Photo By David Carson, dcarson@post-dispatch.com

FERGUSON • City Attorney Stephanie Karr left no doubt about the extent of her influence.

In fact, she illustrated it with detailed invoices submitted each month. The bills document conference calls with the mayor, the drafting of news releases and talking points, correspondence with national news outlets, memorandums to the city clerk about records requests, and hours upon hours spent in closed meetings with the City Council.

On Monday, Karr resigned, saying in a letter that the decision “is mine alone.”

Three weeks ago, city officials revealed that they were removing her as city prosecutor, her other role with the city.

As Karr guided Ferguson through the intense scrutiny after Michael Brown’s death in 2014 and the mass demonstrations it inspired, she watched other influential figures at City Hall — the police chief, the city manager, the judge — capitulate to calls for their resignations.

Until recently, city leaders gave no hint that Karr’s job might be in jeopardy, despite pointed criticism of her in a Department of Justice report published last year. The report included the accusation that she engaged in “retaliatory conduct” against lawyers who challenged the city.

Karr’s grip seemed to weaken this year, as she made one decision after another that provoked outcry. She was the target of protests, accompanied by signs demanding that Ferguson “Stop the Karr-uption.”

“It is with a heavy heart that I provide this notice; however, it is in the best interest of me, my family and the City,” she wrote.

It was the latest in a series of exits of city officials. The city is searching for a city clerk, a municipal court judge, a planning and zoning director and, now, a prosecutor and city attorney.

Those vacancies came at a critical time. The city is attempting to enact the terms of a far-reaching agreement with the Justice Department to reform police and court practices. City leaders are in talks with the federal government about selecting a monitor to oversee that process.

Ferguson City Manager De’Carlon Seewood said the city had not asked for Karr’s resignation, adding that it surprised him.

“I saw her stepping away from the prosecuting attorney position and that would allow her to spend a little bit more time as city attorney,” Seewood said.

He said employees were taking on additional duties because of all the vacancies.

In her letter, Karr pledged to continue working for the city until her successor was in place “so that the City will not be without legal representation for any period of time.”

Over the past several months Karr has refrained from explaining decisions deemed questionable by her critics and others.

In January, the City Council voted 3-2 to appoint Laverne Mitchom, a retired educator who attended some protests, to a vacant council seat. Karr essentially blocked the appointment when she said four votes were needed.

She did not provide a public explanation for her advice except to say it was based on case history.

At the time, Ferguson was considering whether to approve an agreement with the Justice Department to settle a lawsuit. The council eventually agreed unanimously to appoint Mitchom, who provided the crucial vote to put the agreement back on the council’s agenda.

The agreement was approved in March. Karr continued to prosecute cases the Justice Department had cited as constitutional violations.

In the process, she and her colleagues at Curtis, Heinz, Garrett and O’Keefe — the area’s largest municipal firm — billed significant legal expenses, including more than $40,000 in prosecutor fees in the first four months of 2016.

Those fees resulted largely from trials stemming from the 2014 protests in which defendants were charged with “failure to comply,” a charge the Justice Department has accused the city of abusing.

In the past few weeks, St. Louis County Associate Circuit Court Judge Joseph Dueker acquitted five defendants tried in April. In two of those cases, Dueker took the unusual step of granting motions for judgment of acquittals, meaning that there was not enough evidence to even consider guilt.

Karr did not have a contract as prosecutor, but as city attorney, she worked under a 2006 agreement between Ferguson and her law firm.

Ferguson City Manager De’Carlon Seewood said Tuesday that the city would soon advertise for a new city attorney. He said lawyers from Curtis, Heinz could apply, along with others.

To Tony Rice, a member of the Ferguson-based activist group Ground Level Support, it appeared that Karr wanted to punish protesters no matter the cost.

“It looked like she decided to play a zero-sum game,” Rice said. “It was her against the protest community. She was all in.”

Rice said Karr’s resignation proved that the demonstrations were effective.

“Voting didn’t get rid of her,” Rice said. “It was the pressure.”

Last week, Karr dropped a failure-to-comply case, stemming from the 2014 protests, 40 minutes before the scheduled trial.

In a lengthy memo, she insisted the defendant had “clearly” committed the violation. However, she was not prosecuting “for reasons wholly unrelated to the merits of the case.”

Once again, she did not elaborate.

Ferguson city attorney Stephanie Karr talks about the proposed consent decree between the City of Ferguson and the U.S. Department of Justice during a meeting of the city council in Ferguson on Tuesday, Feb. 2, 2016. Photo by David Carson, dcarson@post-dispatch.com

Protesters stand outside of a home where they believe Ferguson city attorney and prosecutor Stephanie Karr lives in Ferguson on Monday, May 9, 2016. Protesters are upset because they feel Karr has acted unjustly as a prosecutor. The protesters chanted and blocked traffic on the residential street for about 30 minutes. Photo By David Carson, dcarson@post-dispatch.com