ST. LOUIS • City detectives have joined forces with the FBI in response to a string of carjackings and robberies in St. Louis this month.

Six to eight detectives for the St. Louis Police Department formed a task force last week to investigate the carjackings. Investigators say they believe at least two or three groups of attackers are pulling off the crimes, most of them in south St. Louis.

In the latest crime, a Barnes-Jewish Hospital employee was robbed of her purse and SUV at gunpoint about 11 a.m. Wednesday in a parking garage at the medical complex. The woman was not hurt in the robbery, in the Duncan Central Garage at 4400 Duncan Avenue. Her SUV was crashed and abandoned nearby. The robber escaped.

It wasn’t clear whether the Barnes-Jewish carjacking was connected to the others, but authorities say they want to do all they can to address the crimes.

St. Louis Police Capt. Steven Mueller said the FBI routinely stepped in to help city police on various investigations. This time, one or two FBI agents will work with the task force. Part of their role is to enhance surveillance video that shows a recent robbery and assault.

“They have a lot of forensic electronics that we don’t have,” Mueller said.

Mueller said carjackings were the main focus of the task force. There have been at least four carjackings this month in the city’s First and Second districts, and some in the Third District. “It’s unusual for us to have that many,” he said.

Mueller said Second District detectives came up with the idea for the task force. It was set up July 12. The night before, a man was carjacked in the Southwest Garden neighborhood just after he parked his car outside his home. The incident was in the Second District.

He was about to open the front door of his home when a man got out of a silver Chevrolet sedan and pulled a handgun. The gunman demanded the resident’s wallet, cellphone and car keys. The gunman then got into the resident’s Nissan and drove away. The car was found abandoned in Berkeley.

Steve D’Antuono, assistant special agent in charge in the FBI’s St. Louis office, said several agents were helping the task force. He said they were interested primarily in the carjackings and commercial business robberies that could be prosecuted under federal law. The business robberies would fall under the federal violation of interstate commerce.

Couple are victims outside their Fox Park home.

D’Antuono said street robberies, such as one about 2 a.m. Sunday in the Fox Park neighborhood, weren’t the prime focus of the FBI efforts. But he said the agents were helping to enhance the surveillance video of that street robbery, on Nebraska Avenue. The video was taken from a neighbor’s camera. D’Antuono said the FBI might be able to bring out any identifying marks on the suspects or provide a clearer view of their clothing.

The agents will also be helping the task force interview witnesses in carjackings and business robberies, D’Antuono said.

Ultimately, D’Antuono said, the goal is to prosecute the most egregious cases in federal court, where convictions can carry longer sentences. He said a single carjacking could result in a 50- or 60-year sentence if the criminal was a felon with a gun. Since last October, 12 people have been indicted on federal charges for four separate cases involving carjackings in St. Louis, FBI spokeswoman Rebecca Wu said.

D’Antuono said, “We want the public knowing we’re interested in bringing down the violent crime rate in the St. Louis metropolitan area.”

‘Do what they say’

Mueller, the commander of the First District, stressed that anyone who is the victim of a robbery or carjacking should comply with the robber’s demands. He said no one’s car or belongings are worth a life.

An exception is when the victim is in a car that a carjacker has commandeered. In that case, Mueller said, the victim should fight for his or her life.

Mueller said that, in the recent robberies and carjackings, one woman tried to hold onto her purse and was overpowered by the robber. That was on Delmar Boulevard near Eastgate Avenue, in the Fifth District; it may be linked to some of the other robberies, Mueller said.

Even when someone complies, there are no guarantees that the victim will escape unharmed, Mueller concedes. In the Third District, a man was pistol-whipped even though he had complied with a robber’s demands. 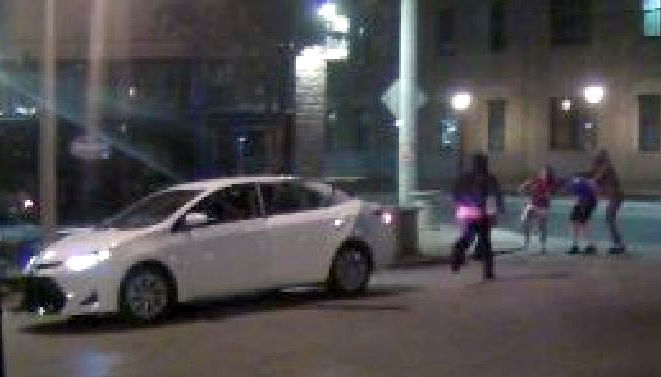 A surveillance image shows a woman robbed of her purse in the 6200 block of Delmar Boulevard on Tuesday, July 11, 2017.