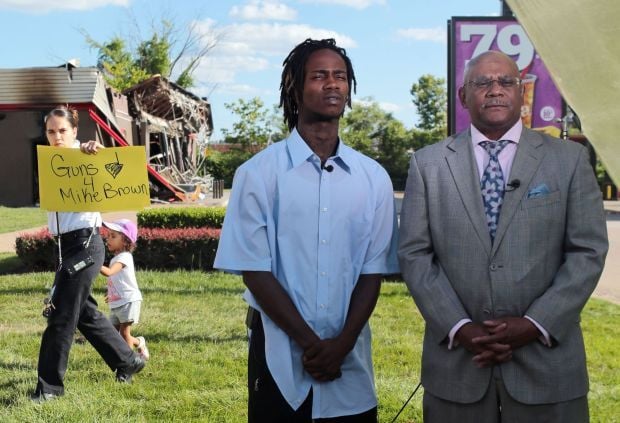 Dorian Johnson tells his version of Michael Brown's death to Al Sharpton on MSNBC on Tuesday, Aug. 12, 2014, at the burned QuikTrip in Ferguson. Standing next to Johnson is his lawyer, Freeman Bosley Jr. Johnson says he was with Michael Brown when a Ferguson officer stopped them and he witnessed Brown's death. Behind them is a protester with a "Guns (down) 4 Mike Brown" sign. Photo by Laurie Skrivan, lskrivan@post-dispatch.com 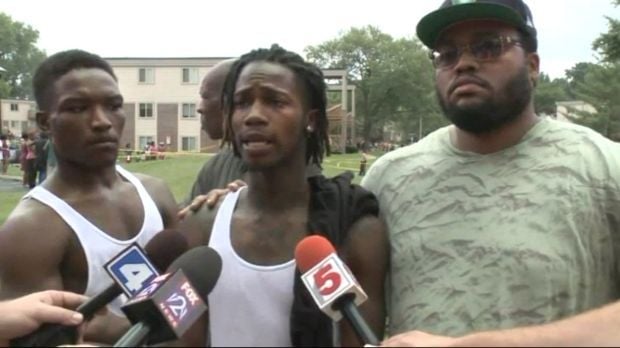 ST. LOUIS • Judges on the federal appeals court here on Wednesday had tough questions for both sides in a civil suit stemming from the 2014 fatal shooting of Michael Brown.

But the issues are unusual and complex, and lawyers on both sides said the case presented a unique set of circumstances.

Johnson’s attorneys claim he was stopped by Wilson in violation of the Constitution. They say Wilson then used excessive force when he fatally shot Brown and shot at Johnson and missed. The suit also claims that Wilson’s actions were part of a pattern of misconduct by Ferguson police.

The Ferguson defendants denied that and have argued that the police are immune from the suit because their actions were not unreasonable. They also say that Johnson was never “seized” for legal purposes. He never submitted to Wilson’s authority, as he stopped briefly but then ran away.

If Johnson was not “seized,” then the constitutional questions don’t come into play, and even Johnson’s attorneys admit his lawsuit must then fail.

Two of three judges on a panel of the 8th U.S. Court of Appeals agreed in July 2017, saying Johnson’s allegations were sufficient to allow the case to proceed. Wilson meant to stop Brown and Johnson, and the pair did stop, they wrote.

But Judge Roger L. Wollman dissented, saying that Johnson wasn’t really seized — that he had the option of leaving or moving to the sidewalk. Wollman said he would have instructed Fleissig to dismiss the lawsuit.

In an unusual move, the Ferguson defendants’ court request for a rehearing in front of the whole appeals court was granted.

They also allowed the National Police Association to file a brief in support of Ferguson’s position that Johnson was not seized. Lawyers for the association said that Fourth Amendment issues in the cases, and their consequences for police officers’ ability to know how to do their jobs were “of the utmost importance.”

On Wednesday morning, the judges focused on whether Johnson was seized and whether Wilson used excessive force.

Lawyer Robert Plunkert, who argued first for Ferguson, said there was no seizure of Johnson, as he could have left the street and gone to the sidewalk, as directed, or run away. He also never submitted to Wilson’s authority, Plunkert said.

Johnson attorney James. M. Williams urged the judges to focus on the “totality of the circumstances,” saying Johnson was first seized when his path was blocked by Wilson’s vehicle, but also throughout the encounter.

A skeptical Judge Raymond W. Gruender said that Johnson was never touched and never submitted to Wilson before running away, adding, a “temporary pause is not enough.”

Williams responded that the stop wouldn’t be constitutional if it was part of a pattern or practice to “terrorize” the black community, as Johnson, who was present in the courtroom, nodded.

Judge James B. Loken mentioned cases that found shooting at someone, and missing, did not represent excessive force.

The judges also asked whether they should consider two Justice Department reports – one that said the police department targeted African-Americans and the court system was used like an ATM and another that found that Wilson did not violate Brown’s rights. It also said some of Johnson’s claims about the shooting lacked credibility.

At the end of the hearing, Chief Judge Lavenski Smith said the case would be taken “under advisement.”

A decision is likely to take months.

Dorian Johnson tells his version of Michael Brown's death to Al Sharpton on MSNBC on Tuesday, Aug. 12, 2014, at the burned QuikTrip in Ferguson. Standing next to Johnson is his lawyer, Freeman Bosley Jr. Johnson says he was with Michael Brown when a Ferguson officer stopped them and he witnessed Brown's death. Behind them is a protester with a "Guns (down) 4 Mike Brown" sign. Photo by Laurie Skrivan, lskrivan@post-dispatch.com