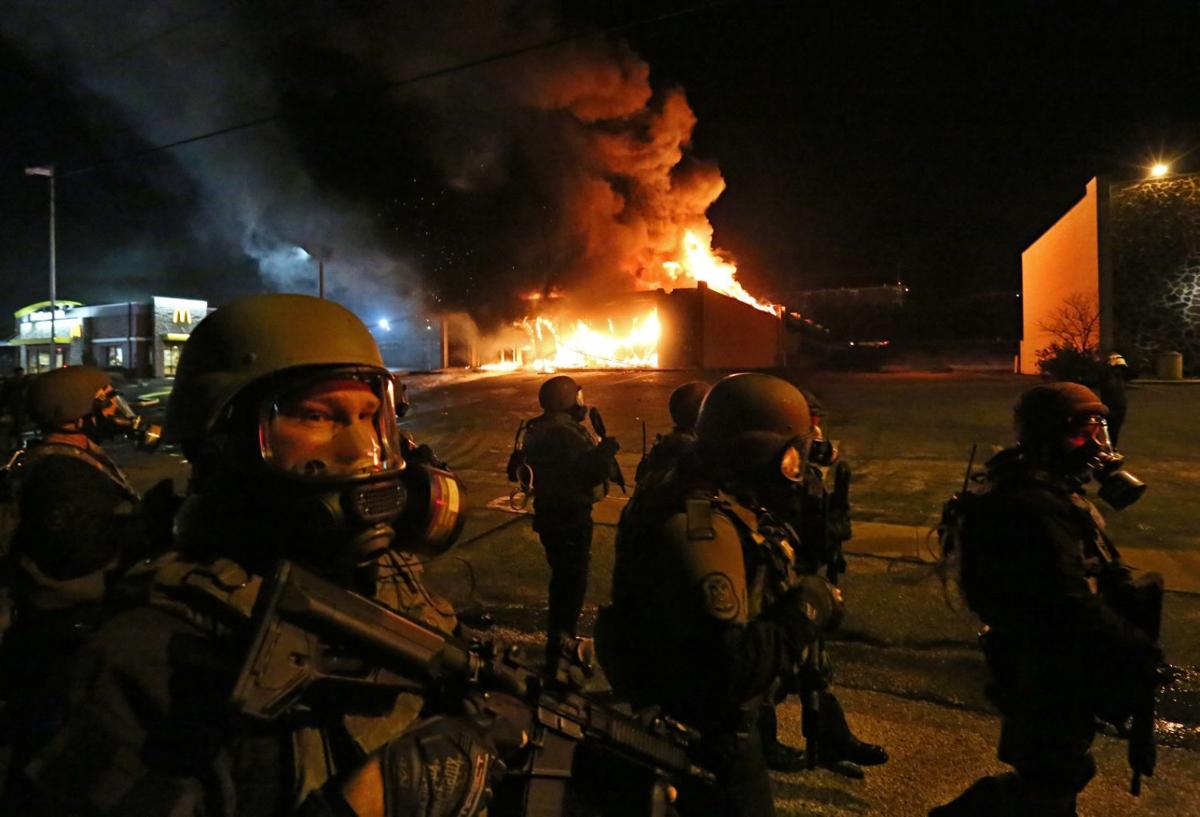 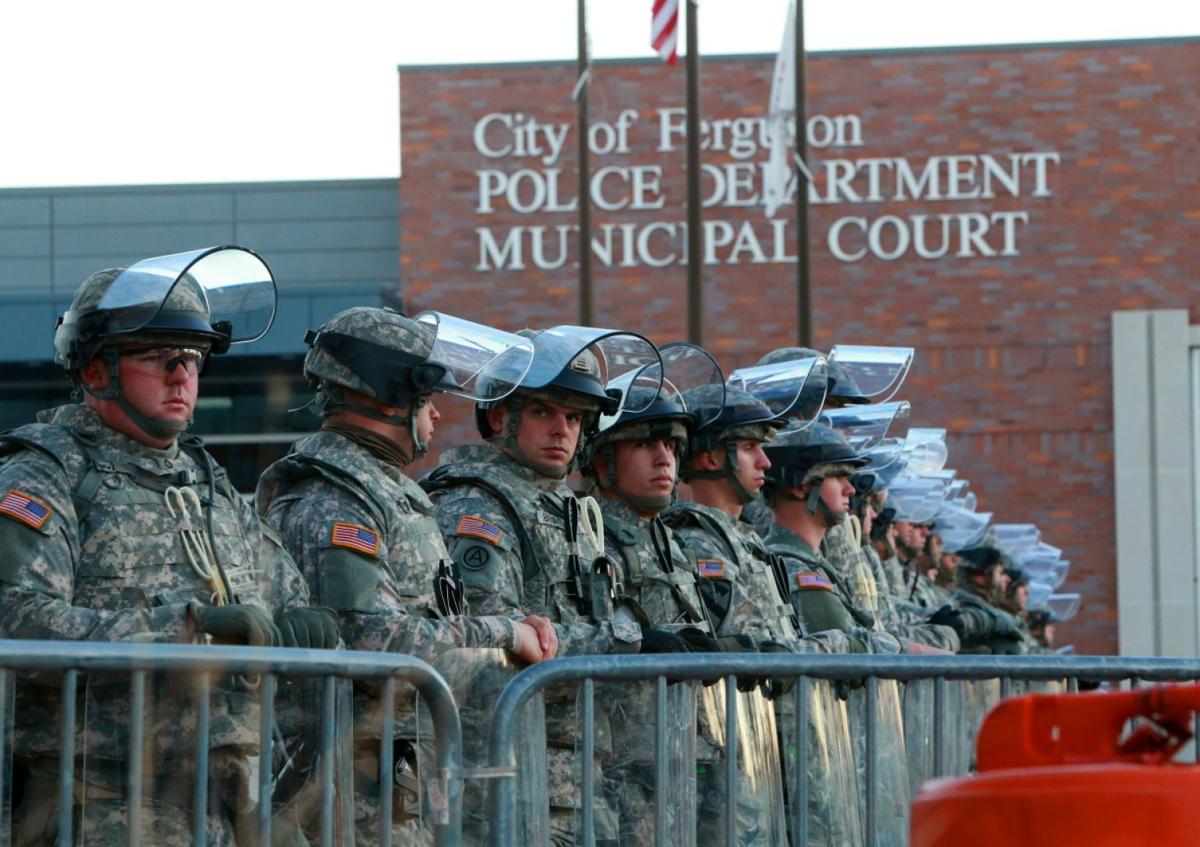 Missouri National Guard troops stand with shields and riot gear outside the Ferguson police station on Tuesday, Nov. 25, 2014, after Gov. Jay Nixon doubled the number of guard members in the area and vowed to use them to protect businesses. Photo by Christian Gooden, cgooden@post-dispatch.com

FERGUSON • Gov. Jay Nixon — facing criticism that he sent the state’s National Guard to business corridors here too slowly to save them from being smashed, looted and burned — pledged Tuesday to triple the number of guardsmen deployed in the St. Louis region.

Nixon said there would be 2,200, up from 700 available Monday night. Moreover, the guard would mobilize a “rapid response” team to help at hot spots.

“The violence we saw in areas of Ferguson last night cannot be repeated,” Nixon said.

Ferguson officials and residents awoke Tuesday to more than a dozen still-smoldering businesses along West Florissant Avenue and South Florissant Road, and vented their frustration on the governor.

“I think it’s an embarrassment the way this was handled,” said former Mayor Brian Fletcher. “He promised three months ago he would protect the businesses and residents of Ferguson. He failed to do either.”

Ferguson Police Chief Tom Jackson said he was assured weeks ago that his city would get as many soldiers as needed to secure the businesses. Then the plan changed, without explanation.

Deundrake Lewis, 54, of St. Charles, was thankful his restaurant — Drake’s Place on South Florissant Road — wasn’t damaged, but was upset that more hadn’t been done to protect his neighbors’ livelihood.

“That’s what I thought the National Guard was here for — to protect residents and businesses — but it didn’t happen,” said Lewis, who was helping others clean up Tuesday morning.

“What should have happened last night?” Knowles asked. “They should have had National Guard troops protecting the hard targets in Ferguson and allowed law enforcement to pursue a very mobile crowd of looters and arsonists. That’s the problem. (The police) could not secure the commercial districts.”

In St. Louis, city officials said they requested 400 guard troops for Monday night, and got them. They were deployed by Police Chief Sam Dotson to protect government buildings and businesses. They delivered what a mayor’s aide said was a good result.

Knowles said he didn’t understand what went wrong in Ferguson.

“I don’t believe we’ve seen the commitment from the state we hoped to get,” he continued. “And knowing that there’s so many people out there who committed a crime, who committed destruction, who aren’t going to be held accountable, because law enforcement was overwhelmed — it makes me concerned for the nights to come.”

Protesters began gathering early Monday evening outside the Ferguson police station on South Florissant Road. By 8 p.m., the crowd had grown to a few hundred.

Then St. Louis County Prosecutor Robert P. McCulloch announced that a grand jury had decided that Ferguson police Officer Darren Wilson would not be indicted in the fatal shooting in August of an unarmed teen, Michael Brown.

The crowd outside the police station quickly began to agitate. Some sprinted up Florissant. Television cameras caught a trash can burning, then a police car, then a restaurant.

“Frankly, as soon as Mr. McCulloch announced the verdict, officers started taking rocks and batteries,” St. Louis County Police Chief Jon Belmar said. “I told the troops, I said just back off, just back off. We’ll try to treat this like some sort of a festival or a baseball game or something. By that time, the protesters basically owned Florissant road.”

Early Tuesday morning, Belmar rattled off the toll: A dozen buildings on fire, at that point — “most of those are total losses.” Two police cars “basically melted on Florissant road.” And about 150 shots fired that he said he heard personally.

“There’s not a lot left on West Florissant between Solway and Chambers road,” he said. “Those are businesses that may never come back.”

Knowles said he kept asking Jackson that night why police could not stem the looting and arson. The response, he said, was that officers were available but could not leave their assignments without making other areas vulnerable.

Knowles said he and Ferguson staffers tried multiple times through multiple conduits to reach Nixon that night, without success.

Lt. Gov. Peter Kinder, a Republican, said Knowles had called him after being unable to reach Nixon. “How does the governor of Missouri not answer the calls, the pleas, of the mayor on the ground?” he asked. Nixon, a Democrat, owed an explanation for his “inexplicable” decision, Kinder said.

Knowles said he didn’t understand why the plan kept changing. First, he understood the troops were to be deployed. “Then it became a support role, where they came out only if necessary.”

The guard didn’t arrive in force in Ferguson until 2 a.m. Tuesday.

“I don’t know where they were,” Knowles said. “We clearly needed them before we saw them.”

The mayor said the ongoing Department of Justice investigation of police department practices also was a hindrance, “poking and prodding” local police on how they would address protesters: who would be seen, who unseen.

Under questioning by a reporter, Jackson noted that the guard plan was changed sometime after he resisted outside political pressure to resign weeks ago but he did not know if there was a connection.

“I thought, ‘Holy crap, are we going to have enough people to protect the businesses in our major corridors?’ I was assured we’d have plenty of law enforcement to handle those tasks. And we got overwhelmed and overrun.”

Nixon insisted at a press conference Tuesday that politics never entered into the planning.

The governor emphasized that guard members were assigned to the command center, which is near Ferguson but in Jennings, and that soldiers were sent to the Ferguson police station early Tuesday morning.

But he did not explain why they were not sent sooner, refusing to discuss operational decisions. And he wouldn’t directly answer Knowles’ criticism.

Belmar refused to talk about Monday’s guard decision. “That’s the governor’s question,” he said, “not mine.”

At his own press conference Tuesday, Knowles again asked for help from Nixon.

“People are going to say that the visual of the National Guard is going to incite something further,” Knowles said. “Well, the absence of National Guard troops allowed this to happen.”

Just after 7 p.m. Tuesday, a couple dozen guardsmen climbed off a bus in front of the damaged and looted Ferguson Market and Liquor store.

Joel Currier, Michele Munz, Kevin McDermott and Alex Stuckey of the Post-Dispatch contributed to this report.

Commanders said the second night's chaos was far less than that of the night before.

Police say someone apparently tried to light the victim's body on fire.

Talking about property damage 'is one heck of a lot better' than talking about people shot, killed or injured, Nixon said.

Local politicians frustrated with Nixon in wake of riots

Dellwood mayor: `I've never talked to him. Never. Not one time.'

National Guard puts out fire at bank in St. Louis

Someone started the fire by tossing something into the Bank of America at about 2:25 a.m. Tuesday.

Embedded with police on a night of protest

Cleanup begins after night of violence 'much worse' than August

Missouri National Guard troops stand with shields and riot gear outside the Ferguson police station on Tuesday, Nov. 25, 2014, after Gov. Jay Nixon doubled the number of guard members in the area and vowed to use them to protect businesses. Photo by Christian Gooden, cgooden@post-dispatch.com