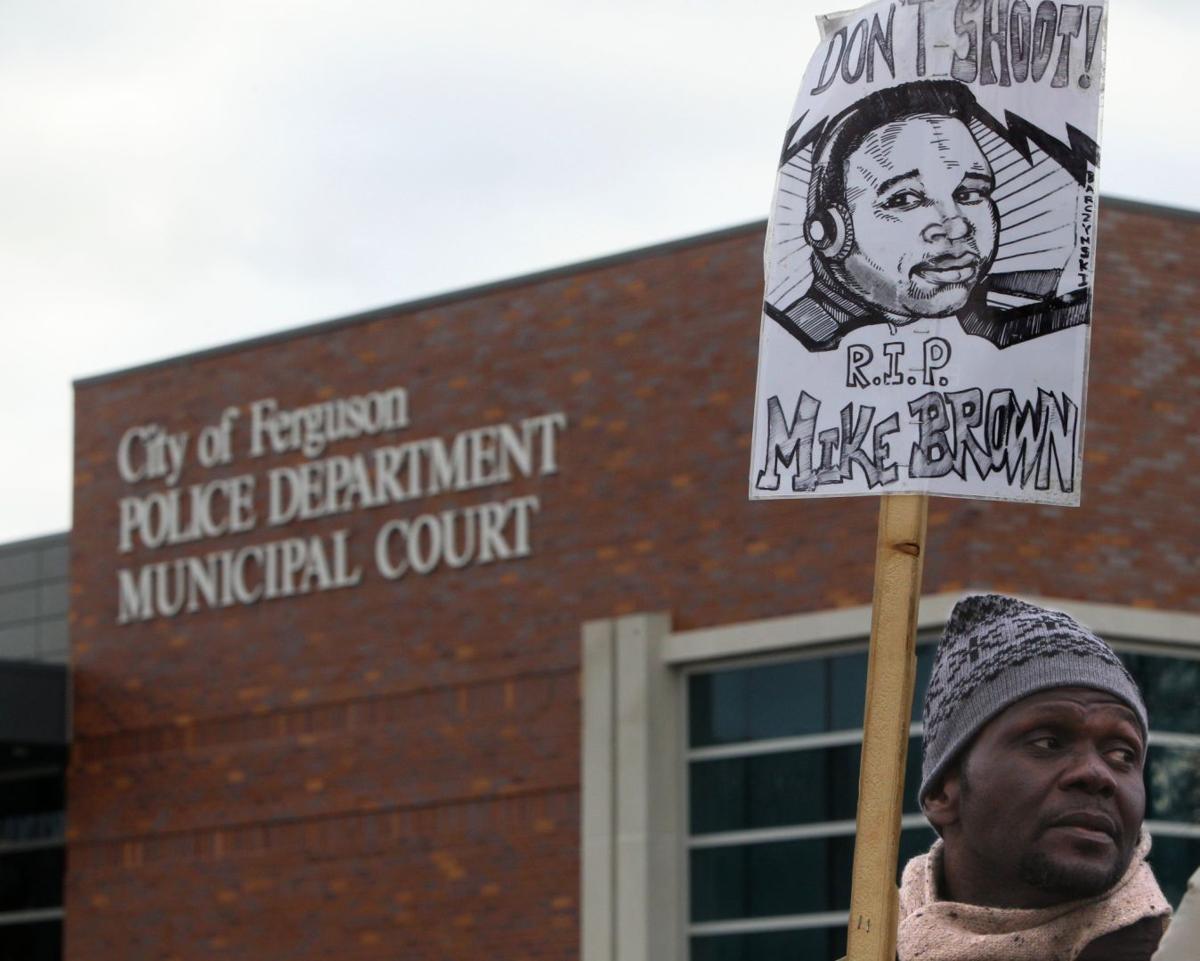 Rick Canamore of Normandy protests outside the Ferguson Police Department on Monday, Nov. 24, 2014, ahead of an imminent grand jury decision on whether police officer Darren Wilson will be charged in the shooting death of unarmed teenager Michael Brown. Photo by Christian Gooden, cgooden@post-dispatch.com 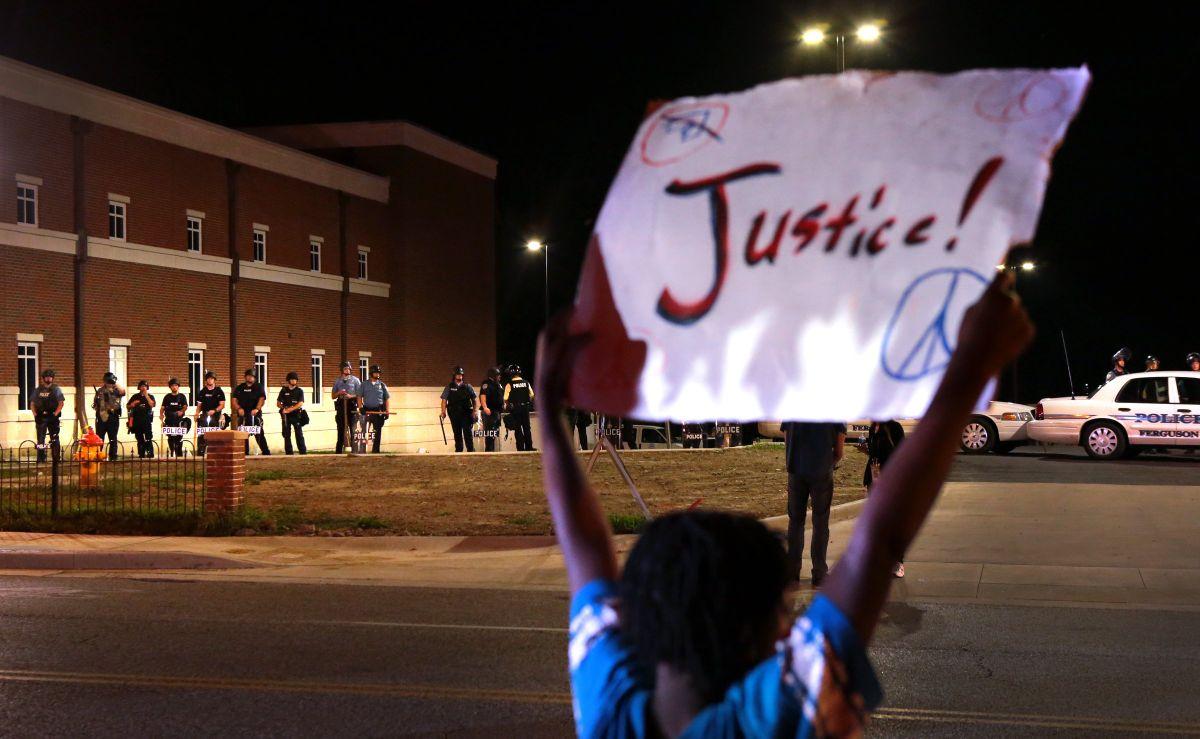 Protestors stage a peaceful rally in front of the Ferguson Police Department on Tuesday, Aug. 19, 2014. Officers in riot gear met the marchers as they walked through the business district of the city, calling for justice in the police shooting of Michael Brown. Photo by Robert Cohen, rcohen@post-dispatch.com

WASHINGTON • Attorney General Eric Holder is expected to announce Wednesday that a Department of Justice investigation found patterns of racial bias in Ferguson’s police and municipal court that violate the Constitution and federal law.

The investigation began in the wake of the fatal shooting Aug. 9 of Michael Brown, 18, by then-Ferguson police Officer Darren Wilson.

The final report will suggest that the department disproportionately stopped African-Americans without reasonable suspicion, made arrests with no probable cause, and used force disproportionately against blacks, according to law enforcement officials familiar with the report.

It also will say that municipal courts were focused more on revenue collection than safety, creating a special hardship for the poor.

The combination of racial bias and a dependency upon fines for revenue has led to a gulf of distrust between police and black citizens, the report will suggest.

It will cite violations of the First, Fourth and 14th Amendments, the officials said.

Ferguson Mayor James Knowles III, who was among officials briefed by the Justice Department Tuesday, said, “It was encouraging to me that there was discussion about how we move forward together and amicably address these issues.”

Brian Fletcher, Ferguson’s mayor from 2005 to 2011 and a current candidate for the City Council, complained Tuesday that the Justice Department appeared to be searching for “a scapegoat.”

Wednesday’s announcement is expected to trigger negotiations between Justice Department and city officials on an agreement, called a consent decree, to try to solve the problems. Failure to reach resolution could lead to a federal lawsuit. The process has been used over the past 20 years with similar grievances in generally much larger cities.

There was no indication if it also will address a separate investigation of whether Wilson violated Brown’s rights.

State and regional officials generally declined to comment Tuesday. Some protesters, who thronged Ferguson streets after Brown’s death and returned after a state grand jury didn’t indict Wilson, applauded the findings but said they wanted consequences.

“This wasn’t just about one teen being shot down in the street in broad daylight,” said Anthony Gray, the attorney for Brown’s family. “But rather this came out of a mindset and a culture within the police department that allowed this to occur as it did.”

He said it was a shame that it took a federal investigation to draw conclusions about problems already widely known in the St. Louis area.

It also will say that black drivers were twice as likely as white drivers to be searched during vehicle stops but were 26 percent less likely to be caught with contraband.

In documented cases of use of force by Ferguson police, the report will say, 88 percent were against African-Americans.

Among the findings likely to provoke reaction, sources say, are two emails written by Ferguson police and municipal court officials.

One, from November 2008, said that Barack Obama could not be president for four years because “what black man holds a steady job for four years.”

Another, from May 2011, read: “An African-American woman in New Orleans was admitted into the hospital for a pregnancy termination. Two weeks later she received a check for $5,000. She phoned the hospital to ask who it was from. The hospital said, ‘Crimestoppers.’ ”

The Post-Dispatch could not determine Tuesday who wrote the emails.

The report will say that in Ferguson’s municipal court, blacks were less likely than others to have their cases dismissed by a judge, far more likely to have a warrant issued in their cases and more likely to be arrested during traffic stops because of outstanding warrants.

The investigation also found that from April to September last year, 95 percent of people held at the Ferguson jail longer than two days were African-American.

The report will say that Ferguson has a pattern of putting revenue over public safety, in violation of the 14th Amendment’s due process and equal process protections, by collecting thousands of dollars in fines on those living below or near poverty.

It also will say that since 2010, Ferguson courts have collected more than $442,000 for failure-to-appear fines, and that use of that charge was discontinued last year.

In general, the Justice Department report will say there is a wide mistrust of Ferguson police by major portions of the population, particularly blacks, who often seen them as illegitimate or even absent.

Federal investigators spent about 100 person-days looking into the department, perused 35,000 pages of records, and had interviews with city leaders as well as hundreds of in-person or telephone interviews with residents.

‘PEOPLE SHOULD BE FIRED’

Alexis Templeton of Ferguson, a frequent protester, said she wanted action — not talk. Ferguson officers, she said, should be removed from their jobs until they have had more training. “I think people should be fired,” she said.

Patricia Bynes, Ferguson’s Democratic committeewoman, called the findings heartbreaking. “We knew it was bad,” she said. “I think it’s a little worse than we even thought. ... The community has not been making this up.”

Either the Justice Department or the St. Louis community must do more, said Thomas Harvey, executive director of ArchCity Defenders, a nonprofit pushing for municipal court reform.

Even if Ferguson were reformed, he said, it wouldn’t change the fact that, “Every community is doing something similar to Ferguson.

“I’m hopeful that, when the report does come out, other towns will take it seriously, and there will be a moment of genuine change,” Harvey continued. “But I don’t see anything yet that makes me think that’s coming.”

What happens to all those arrested and charged based on incidents now deemed demonstrably racist? he asked. “Those convicted surely could have dramatic impacts on their lives going forward.”

St. Louis County Executive Steve Stenger had no comment about the report but, speaking hypothetically, he said county police would be “fully ready” to step in should the Justice Department call for disbanding the Ferguson force.

Some have questioned what they have heard of the report.

Fletcher, the former mayor who is now seeking the Ward 2 council seat, said that the city population might be 67 percent black, but that is not necessarily a fair comparison for enforcement statistics.

Many of the surrounding communities have African-American populations of more than 80 percent, he explained, and many of those people are drawn to greater shopping opportunities in Ferguson. As a result, he said, Ferguson’s daily black population would be higher than the census reflects.

“I don’t know that the DOJ took that into consideration,” Fletcher said. “I don’t know how that proves bias.”

'Driving while gay'? Proposal would have Missouri cops try to gather that info, too

Editorial: Ferguson in a futile fight with the hammer of justice

The Ferguson City Council is playing a game of chicken with the U.S. Department of Justice that it is going to lose.

The city's leaders are fooling themselves if they think the consent decree the Justice Department submitted to them after months of negotiation is up for retooling. Ferguson does not have the upper hand in dictating terms of the decree, which is intended to reform the city's police department and court, to the federal government.

DOJ will hone in on Ferguson traffic stop numbers

Other towns also have disparate numbers of searches, arrests.

But it stops short of whole-hearted endorsement of police body cameras.

The commission has spent most of its first 100 days learning about the region's problems.

Rick Canamore of Normandy protests outside the Ferguson Police Department on Monday, Nov. 24, 2014, ahead of an imminent grand jury decision on whether police officer Darren Wilson will be charged in the shooting death of unarmed teenager Michael Brown. Photo by Christian Gooden, cgooden@post-dispatch.com

Protestors stage a peaceful rally in front of the Ferguson Police Department on Tuesday, Aug. 19, 2014. Officers in riot gear met the marchers as they walked through the business district of the city, calling for justice in the police shooting of Michael Brown. Photo by Robert Cohen, rcohen@post-dispatch.com