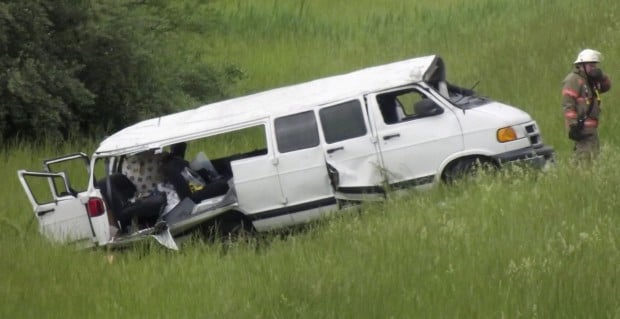 Emergency personnel gather at the scene near Vandalia, Ill., where a van veered off Interstate 70 and overturned several times, killing five people and sending six others to hospitals on Monday, May 20, 2013. (AP Photo/Centralia Sentinel, Steven Stilt) 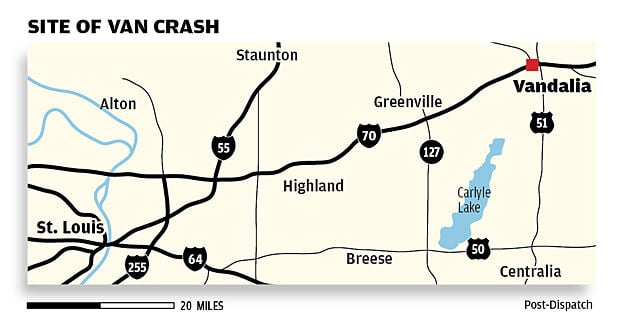 VANDALIA, Ill. • A crash that killed five men and injured six near here Monday morning was another in a series of one-vehicle rollovers that have prompted repeated warnings about 15-passenger vans for years.

Fayette County Coroner Bruce Bowen said the vehicles represent “my worst nightmare.” He said it may take until Tuesday night to get positive identifications of the dead; none was carrying a wallet.

The group was traveling home to Maryland from a religious event in California, according to Fayette County sheriff’s Deputy Shawn Carter. He did not know details.

Carter said the eastbound vehicle, a white 2002 Dodge van, ran into the median of Interstate 70 at about mile marker 57, then crossed the eastbound lanes and rolled several times. It stopped upright a short way off the pavement. The deputy said the conditions at the time, about 9:45 a.m. were dry and clear.

The van has Maryland license plates but no decals or painted markings, as for a church. Officials have not said who owned it.

Illinois State Police were investigating the cause of the crash a few miles west of Vandalia, about 57 miles northeast of St. Louis.

An official at the scene said nine of the 11 people were thrown out as the van rolled.

Bowen said all five of the dead were ejected. It seemed to illustrate one of the common reasons cited by safety officials for the large-capacity vans’ relatively high fatality record: people riding in the vans often don't wear seat belts.

“When you get a van loaded with that many people and you run into a problem, the weight shifts and it’s bound to go up on two wheels,” Bowen said. He said he was told by investigators that it appeared the driver, who survived, had “overcorrected.”

All four of the victims who were taken to Fayette County Hospital in Vandalia were reported to be in fair condition, spokeswoman Lyn Gartke said.

Two were airlifted to St. Louis University Hospital, where they were said to be in serious condition, and one went to a hospital in Springfield, Ill. One remained in Vandalia.

One of the other injured men was taken to Greenville Regional Hospital in Greenville, said Tammy Lett, the chief nursing officer there. She would not provide a report on his condition. The whereabouts of a sixth injured man mentioned by police was not clear.

Bowen said all of the victims were men. “Thank God there were no children,” he said. “It’s bad enough as it is.” He said it was the worst accident he has seen in 13 years as coroner.

The Insurance Institute for Highway Safety says that while the death rate for drivers of 15-passenger vans is lower than for other vehicles, fatalities for all occupants is higher: 136 deaths per million registered vehicles, as opposed to 104 for all vehicles.

The National Transportation Safety Board says a study showed such vehicles were involved in 1,512 fatal crashes from 1994 to 2004. More than 40 percent were single-vehicle wrecks, and more than a third overturned. The NTSB said 81 percent of the vans’ fatalities occurred in single-vehicle rollovers.

The agency blames underinflated tires, loading of people and cargo in a way that shifts the center of gravity, and handling characteristics that are very different from other vehicles.

In 2002, a Post-Dispatch report on the subject indicated that federal officials had issued an unusual number of consumer advisories about risks from such vans, especially rollovers.

A National Highway Traffic Safety Administration official said then that there was “nothing inherently unsafe” about the vehicles but that fatalities often were tied to inexperienced drivers and failure by passengers to wear seat belts.

Five killed in van crash near Vandalia, Ill., were from Baltimore

Victims were bound for Philadelphia from religious event in California.

Woman dies in collision with cement truck near Millstadt

Crash was on Route 163 near Town Hall Road, police say.

One of the boys had taken his mother's car keys without her knowledge, police say.

Emergency personnel gather at the scene near Vandalia, Ill., where a van veered off Interstate 70 and overturned several times, killing five people and sending six others to hospitals on Monday, May 20, 2013. (AP Photo/Centralia Sentinel, Steven Stilt)