ST. LOUIS — A former St. Louis police officer is facing criminal charges and a civil suit claiming, while off-duty, he illegally searched a man before stealing about $200 in cash from him.

Kevin M. Baroni, 35, was charged Nov. 2 with misdemeanor kidnapping and stealing about one year after he stopped and searched Richard E. Brown, a St. Louis construction worker.

Brown on Feb. 4 also filed a lawsuit against Baroni that claims unconstitutional seizure of property and describes a hostile interaction with Baroni, then a St. Louis police officer. 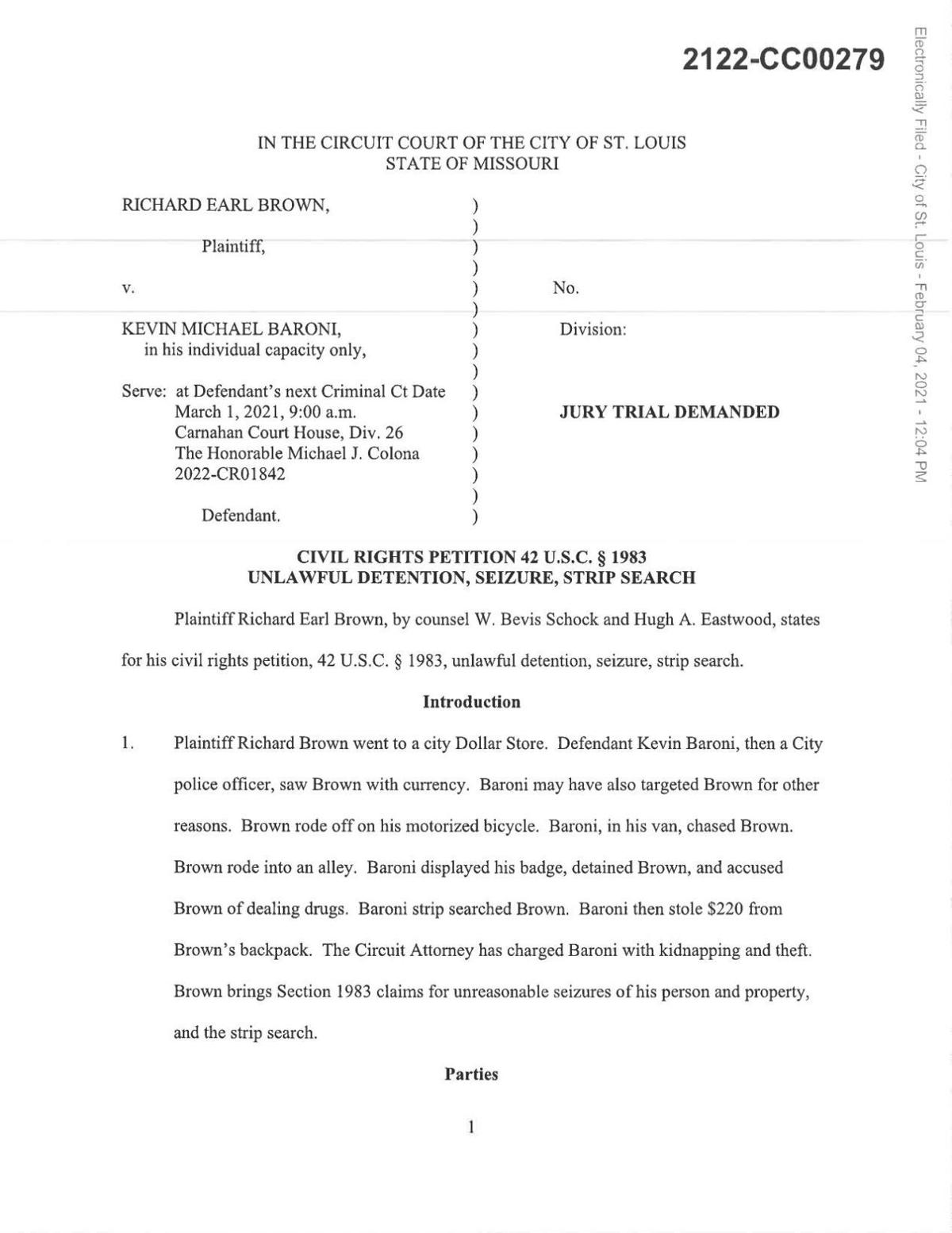 The case and lawsuit have not been previously publicized.

Baroni’s attorney, Brian Millikan, called the charges baseless. “Mr. Baroni was an undercover detective in the Narcotics Division. He was off duty and observed what he thought to be a drug transaction. He investigated it and let the subject go,” Millikan told the Post-Dispatch in an email. “The only thing Mr. Baroni is guilty of is dedication to a profession that is increasingly thankless.”

The incident happened on Nov. 5, 2019, almost year before Baroni was charged.

Brown reported to police that day that he had been at a Dollar General, paid for items from a roll of cash and put the roll back into his backpack, an officer with the police department’s Internal Affairs unit wrote in charging documents. 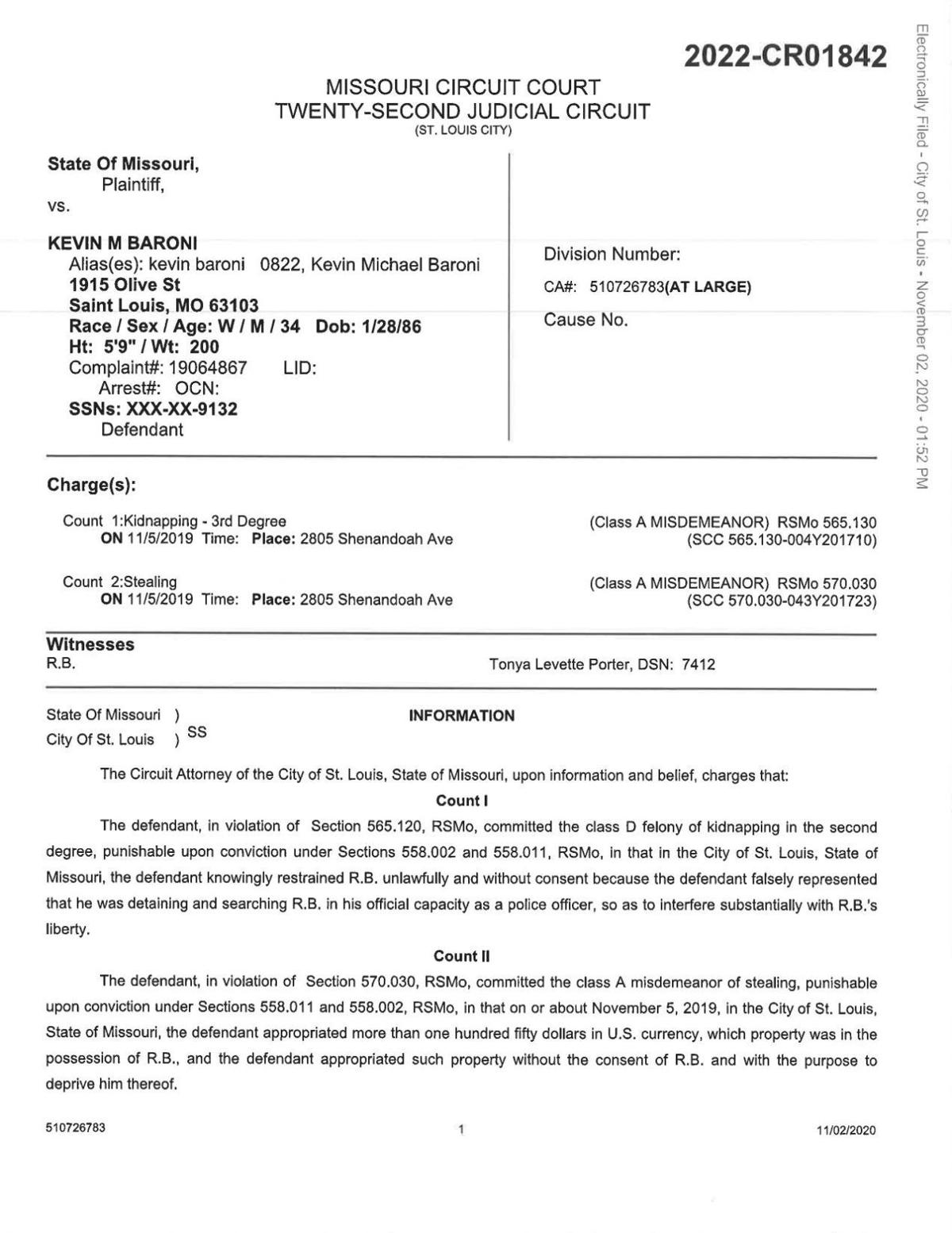 But after Brown left the store, he realized he was being followed by a maroon van.

The van followed Brown into an alley. Officer Baroni got out and identified himself as a undercover detective, charging documents say.

Baroni accused Brown of being a junkie and told him to remove his shirts and sweatshirt, and then searched him, Brown told police. Baroni also demanded to search Brown’s phone, and Brown complied, according to the charges.

And when a plastic bag began to float away, Baroni ordered Brown to chase it, while Baroni searched Brown’s backpack.

Baroni never radioed the stop in to superiors or wrote a report about it, the internal affairs officer wrote in the charging documents.

Brown’s lawsuit gives a more detailed account of the interaction.

The lawsuit claims Baroni first spotted Brown at the McKinley Heights Dollar General, 2500 South Jefferson Avenue, and in his van followed Brown’s motorized bicycle “at an unreasonably close distance, literally less than a bicycle length” behind him.

“Brown was nervous and scared because he felt like whoever was in the van intended him harm and might intentionally crash into his motorized bicycle,” the suit states.

Brown pulled into an alley in the 2200 block of California Avenue, in Fox Park, and the van followed close behind “nearly pinning” Brown to a utility pole, according to the suit.

Baroni told Brown he was a police officer and accused him of delivering drugs to a woman outside the Dollar General.

The suit also claims Baroni dumped the contents of Brown’s bag on the ground, causing his dentures inside to break. Baroni then offered Brown $200 for information on a drug house before letting him go, according to the suit.

Brown took three short videos of Baroni during the stop and texted them to his girlfriend.

“There was not warrant of any kind giving Baroni’s actions even a glimmer of lawfulness,” the lawsuit states.

After Brown noticed the money was missing, he reported it to police.

Later on the day Baroni stopped Brown, Baroni got a tattoo, and paid in cash, the suit claims.

Baroni was a St. Louis police officer from June 2010 through Sept. 7, 2020, about one month before the criminal charges were filed. St. Louis police would not specify if he was fired or resigned.

Baroni’s police license is inactive as of this week, meaning he has not completed the required training to keep it active, according to the Missouri Department of Public Safety. He is not currently employed by a law enforcement agency.