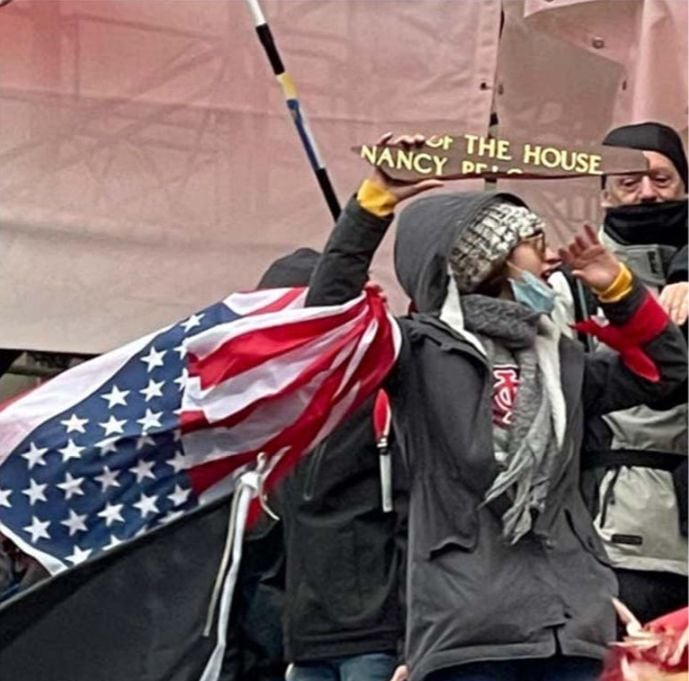 FRANKLIN COUNTY — A woman from Franklin County has been accused of participating in last week’s riot at the U.S. Capitol and triumphantly holding up a broken sign belonging to House Speaker Nancy Pelosi.

Tipsters told the FBI they spotted Emily Hernandez in widely circulated pictures of rioters in and around the U.S. Capitol on Jan. 6, charging documents say. Those pictures, from inside and outside the Capitol, show a woman holding up pieces of a sign from outside Pelosi’s door.

Two of the tipsters have mutual acquaintances with Hernandez and another is a friend from high school, the charges say, and one saw pictures of Hernandez in the Capitol that she’d posted via Snapchat.

Hernandez has not been arrested, according to court documents. She could not be immediately reached for comment.

Charging documents say she lives in Sullivan but public records place her outside city limits.

Prosecutors and federal officials say Trump supporters broke through police lines and into the building, with many intending to disrupt the vote to certify the 2020 election.

A police officer was killed, and a protester was shot as she was climbing through an interior window. She later died. More than 125 people have been arrested so far on charges related to the riot.

About 300 demonstrators gathered, spoke and concluded a protest by painting a sign, "Resign Hawley" in the middle of Broadway on Saturday, Jan. 9, 2021, outside the historic Old Courthouse in downtown St. Louis. Speakers called for Sen. Josh Hawley (R-Mo), to resign following a seizure and occupation of the U.S. Capitol in Washington, D.C. by an angry Pro-Trump mob on Wednesday. Hawley was the first Senate Republican to announce he would raise objections to the Electoral College results.

Emily Hernandez of Sullivan says trusted friends of the family invited her to go with them to Washington, D.C.

Paul Scott Westover, 52, was in a crowd that breached police barricades at the insurrection Jan. 6, federal charging documents say.