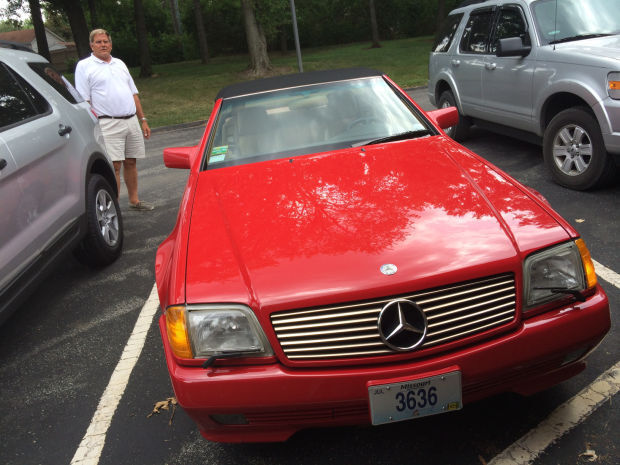 Sunset Hills Mayor Mark E. Furrer stands near his red Mercedes at City Hall on Wednesday, July 30, 2014. He was driving the car during an incident with a cyclist the day before. Photo by Joel Currier, jcurrier@post-dispatch.com 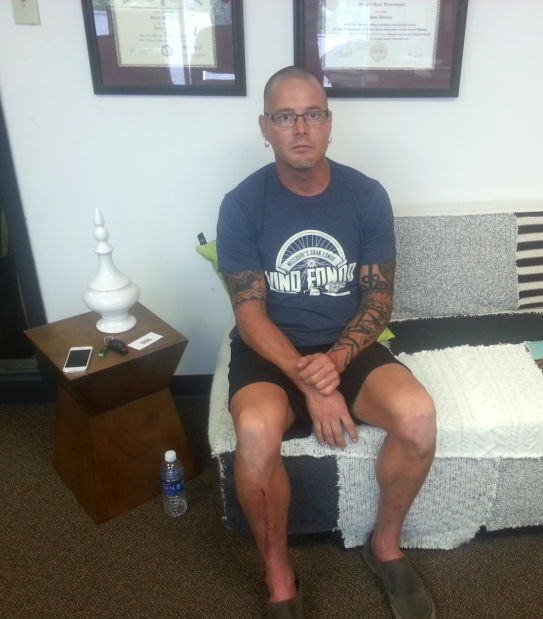 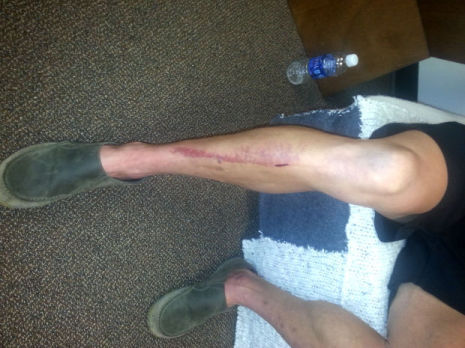 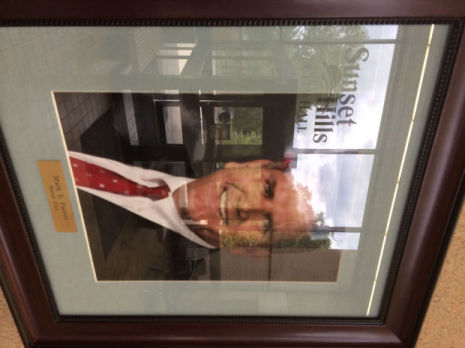 “The entire friggin’ country saw the story,” Furrer said as he read a stream of angry emails on his cellphone. “Somebody else hopes I get hit by a Mack truck.”

Across the nation, cycling enthusiasts rallied behind a bicyclist from Fenton who had accused Furrer on Facebook of intentionally running him off the road, rupturing his Achilles tendon and damaging the cyclist’s $12,000 bike.

Now Furrer was “waiting for torches and pitchforks” as he ignored phone calls and emails from California to Canada.

“These cyclists are a close-knit group,” he said.

Later Wednesday, one of two sponsors of a Sunset Hills triathlon scheduled for next month threatened to pull out unless Furrer apologizes.

The cyclist, Randy Murdick of Fenton, told the Post-Dispatch he was nearing the end of a 40-mile ride Tuesday afternoon when a man in a red Mercedes convertible came upon him on Old Gravois Road near Kennerly Road in Sunset Hills and matched his pace.

The man then swerved into his bike, Murdick said, sending him tumbling to the pavement. He suffered multiple bruises and a cut.

Sunset Hills Police Chief William LaGrand said officers were called to the scene about 4:30 p.m. He confirmed the incident involved the mayor and a cyclist but said he did not have details on the incident.

A police report will not be ready before Friday, he said, so he was not sure whether the mayor’s car had struck the bicycle. LaGrand said he did not believe paramedics had been called.

Murdick said the man in the red car took off, and a witness in another car followed him. Furrer returned to the scene, and about a half dozen police officers arrived, Murdick said. Murdick later went to St. Anthony’s Medical Center and said he has a torn Achilles tendon and bruises.

Murdick said he didn’t learn the driver of the car was the city’s mayor until after going to the police station with his attorney to demand that the driver be investigated for felony assault. He said the matter should be taken seriously and not be treated as a simple traffic accident.

Furrer disputes Murdick’s version. He said he was driving his red 1991 Mercedes 300SL convertible with the top down when the cyclist ran a stop sign and whipped around a corner. He said he yelled at the cyclist that he needed to stop at the sign, and the cyclist started shouting at him, using profanities.

“He caught me off guard, frankly,” Furrer said. “Because I would have expected him to stop. He came around the corner at a pretty good clip on some fancy bike. Frankly, it’s my mistake, I shouldn’t have engaged him and I tell everybody I know, never engage them.”

Furrer said Murdick grabbed onto his car during the incident, which Murdick denies. Furrer said he didn’t accelerate or swerve, but saw Murdick tumble from his bike. Furrer said he kept going, but turned around at the first opportunity to go back to check on him.

Murdick said that not only did he stop at the stop sign on Old Gravois Road, but did so long enough to unclip his shoes from the bike’s pedals. Murdick also said he would have never grabbed the mayor’s car, adding that it would have made no sense to pit a 17-pound bike against a 3,000-pound vehicle.

Furrer’s disputes Murdick’s claims but stopped short of calling him a liar.

“Honestly, I’m ready to vomit,” Furrer said. “From yesterday on I’m so upset, I just feel like I could throw up because it’s so disturbing that somebody could accuse me of a road rage thing.”

No arrests were made and the incident remains under investigation, the police chief said. It will be treated like any other case despite the mayor’s involvement, LaGrand said.

Murdick questioned why the mayor wasn’t given a field sobriety test. LaGrand said there was no evidence that alcohol had played a role, so Furrer wasn’t tested.

The part-time mayor attended the opening of a Mexican restaurant in the city earlier in the day and said he had Diet Cokes with his lunch. A manager at Gordo’s Margaritas confirmed that the mayor drank soda, and said the restaurant wasn’t yet serving alcohol while it awaited a copy of its state liquor license.

Murdick’s attorney, Michelle Funkenbusch, said LaGrand should have called an outside agency to investigate, arguing that officers had no business looking into accusations that involve their boss.

Chip Self, managing partner of Swim Bike Run, an area endurance shop, said that Murdick, an electrician, was well-known among triathletes. He said Murdick had recently won a major state mountain biking contest.

“He’s the kind of guy that wins half the races he enters outright,” Self said. “He is beating guys half his age all the time.”

Swim Bike Run is one of two sponsors of the upcoming Sunset Hills Triathalon, to be held Aug. 24. Self said he would withdraw his company’s sponsorship of the race unless Furrer apologized and the city pledged to meet bicycle safety standards set by the League of American Bicyclists.

Furrer, retired from banking and real estate work, was a write-in candidate who beat the incumbent mayor in April. A controversy over a proposed QuikTrip store helped power Furrer’s surprise win over then-Mayor William Nolan.

“I caught him with his pants down around his ankles,” a jubilant Furrer said at the time, after being elected to his first public office. “The people have spoken.”

On Wednesday morning, Furrer’s Facebook page filled up with one accusatory comment after another. By midafternoon, the page disappeared altogether.

Chief says his department can be fair but that outside probe would remove any question of favoritism.

Sunset Hills Mayor Mark Furrer is accused of running bicyclist off the road and driving off. The mayor denies it.

They claim harassment and motorist abuse is common on St. Louis area roads.

Sunset Hills Mayor Mark E. Furrer stands near his red Mercedes at City Hall on Wednesday, July 30, 2014. He was driving the car during an incident with a cyclist the day before. Photo by Joel Currier, jcurrier@post-dispatch.com 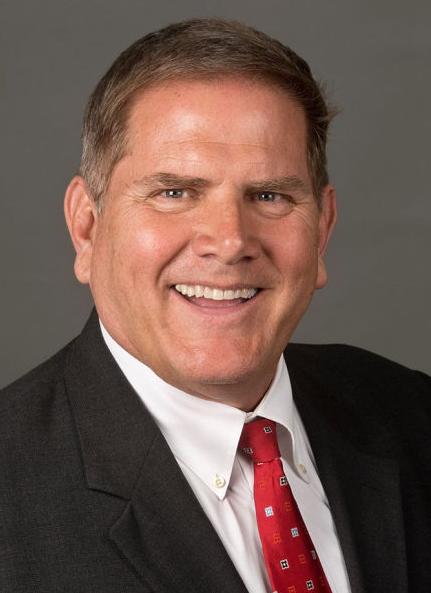