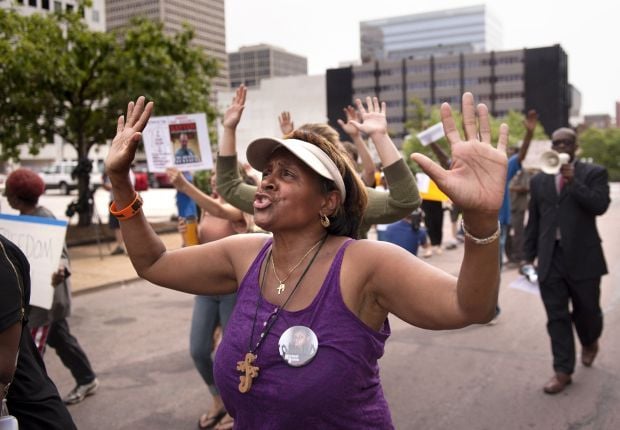 Debra Penson, of St. Louis, joins others protesting outside the Buzz Westfall Justice Center in Clayton on Wednesday, Aug. 20, 2014. Demonstrators demanded justice in the police shooting of Ferguson teenager Michael Brown on Aug. 9. A grand jury heard evidence in the case inside the courthouse. Photo by Sid Hastings 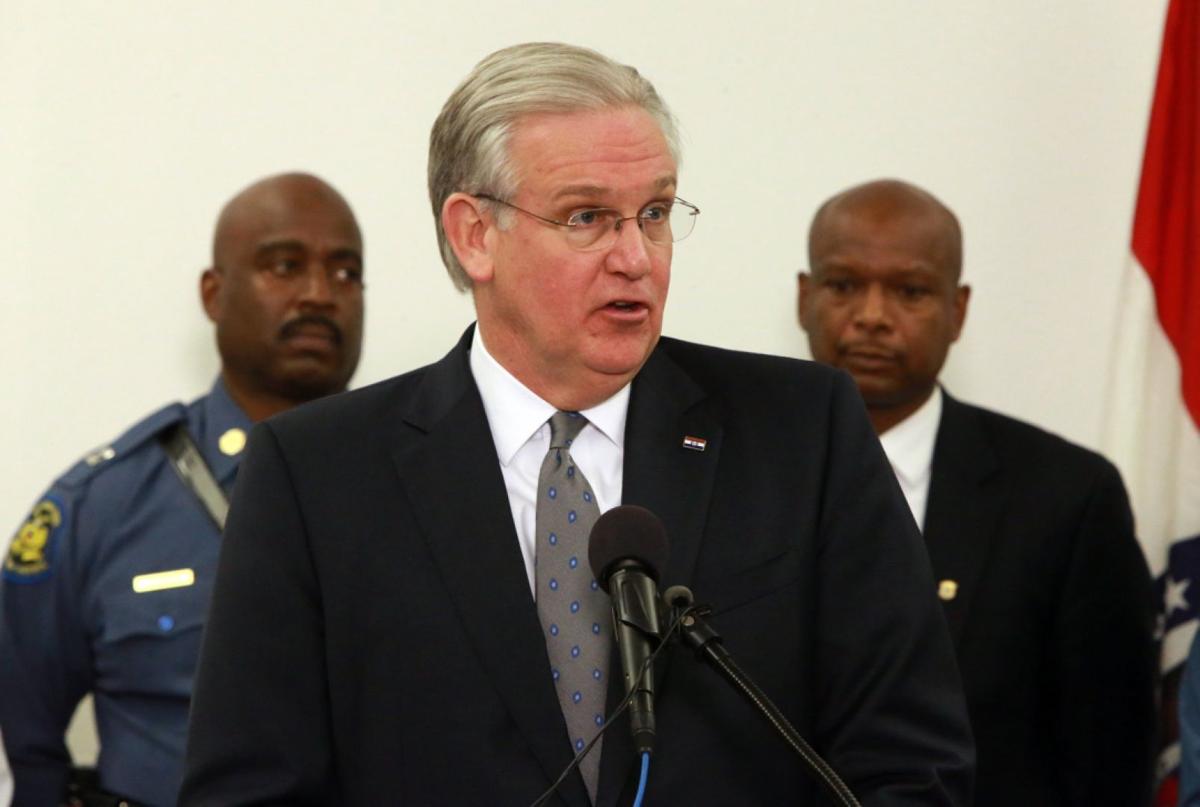 CLAYTON • For almost three months, a St. Louis County grand jury here has been considering whether to indict Ferguson police Officer Darren Wilson on charges related to the fatal shooting Aug. 9 of Michael Brown Jr. Grand juries are selected by a judge and serve a set term. The Wilson grand jury’s term, which began in May, was set to expire Sept. 10, but it has been extended by court order up to Jan. 7.

For the bulk of their term, the grand jury was hearing a series of cases presented to them by St. Louis County Prosecuting Attorney Robert P. McCulloch’s office. But the week after Brown’s death, McCulloch announced that the jury would assume a new role: investigating the shooting.

Typically, grand juries hear only the evidence provided by prosecutors to establish probable cause, but McCulloch has said that the Wilson grand jury would be given the amount of evidence that is typically presented at a trial. Instead of simply reviewing a medical examiner’s report, jurors would hear from the medical examiner, he has said. They would also hear from witnesses and would hear every statement made by those witnesses — whether to the media or via social media, he promised.

There are 12 grand jurors, selected from the same jury pool used for jury trials. They are not in a courtroom, but in a regular room, sitting at a U-shaped table. Prosecutors sit at another table, and witnesses at a third. A judge tries to achieve a jury that is balanced across gender, race and geography. This jury has one black man, two black women, six white men and three white women.

The jurors do not meet every day, but as their schedules allow. They are paid about $18 a day plus mileage.

Although the grand jury could go on to January, a decision could come any day. McCulloch has said he expects a decision by mid- to late November.

Three current and former prosecutors agreed to discuss grand jury procedures with the Post-Dispatch, with the provisos that procedures are different in different places, that the passage of time may have changed procedures and that no one knows what is happening in the Wilson grand jury, because the process is secret.

Dwight Warren was a longtime prosecutor in the St. Louis Circuit Attorney’s office before retiring in 2010. Donald L. Wolff was a prosecutor in St. Louis County for three years in late 1960s before going into private practice. He is mostly retired and was reached by telephone in Florida, where he spends six months each year. Eric Zahnd has been the prosecuting attorney in Platte County, in suburban Kansas City, since 2002. He is a past president of the Missouri Association of Prosecuting Attorneys and has been a vocal critic of Missouri Gov. Jay Nixon, saying the governor was “fueling tensions” in Ferguson by neither supporting McCulloch’s decision to have a grand jury investigation, nor replacing him with a special prosecutor. The interviews have been condensed and edited for clarity.

How long do cases typically take to present?

WARREN: Typically, if you have all your witnesses present, it could take maybe half an hour, although it depends on the strength of the evidence. Cases are sometimes heard over multiple days if witnesses are not all available on the same day.

How many witnesses would the grand jurors see?

ZAHND: In a very straightforward case, it’s possible they would only hear from one. In many, we’ll present a single police officer who will testify to everything they know about the case, including presenting hearsay.

Does the prosecutor generally present the evidence to the grand jury?

Does the prosecutor run the grand jury?

WOLFF: People say that the prosecutor controls the grand jury. That’s not necessarily true, particularly at the end of their term. The longer a grand jury serves, the more independent they become.

How are jurors informed of the law?

WARREN: Jurors have handbooks in the room. I used to give jurors an overview of the law and the different charges available, at the beginning of the term.

WARREN: If forensic evidence doesn’t back up one version of an event, jurors have to decide who to believe. Jurors have to weigh how neutral a witness is. Friends of Brown may be looked at differently than two contractors from Jefferson County who don’t know anybody. But a basic feeling of justice and fairness can influence a jury, and if some segment of the population had a mistrust of police, that could influence the decision.

ZAHND: It’s not required, and in most cases, it’s not done. It’s my understanding that with most if not all of the witnesses, there are transcripts being made. That’s solely on what Mr. McCulloch has said previously.

ZAHND: Typically they would not be, no. We want jurors to have frank discussions with one another and not to hold back. There is a concern if they were recorded, jurors might not feel free to share their full opinions on a case.

Do the rules of evidence used in a courtroom apply?

WARREN: No, but they’re usually adhered to pretty closely.

What standard is used for an indictment?

WARREN: Prosecutors need to establish that there is probable cause that a crime occurred and that it’s more likely than not that the defendant or suspect committed that crime.

In a complicated case, how long do deliberations typically take?

ZAHND: It’s impossible to determine. It lasts as long as the grand jurors think they need.

Could the jurors ask for more evidence during deliberations?

ZAHND: They certainly could request more witnesses if they’ve gotten to deliberations and decided that they needed to hear additional information.

How does the voting process work?

ZAHND: That is up to the grand jurors themselves to decide on their voting process. They’re certainly entitled to take some initial votes or straw ballots and use whatever system they believe is best to get to a final result. They’re entitled to say, OK, let’s take an initial vote. All right, we’re at 8-4, do we want to talk about it some more? See whether somebody might change their mind?

What if they can’t agree on when they’re done voting?

ZAHND: Again it will be up to the grand jury as to how they want to handle such a situation. I’ve never encountered that type of situation where a grand jury has been essentially deadlocked and unable to come to a decision; if they encountered it they could seek some additional guidance from either the prosecutor or the judge who ultimately oversees the grand jury.

What are the charging options for the jury?

If Wilson has argued that he fired in self-defense, what would contradict that claim?

ZAHND: While we have heard bits and pieces, through the media, none of us know exactly what witnesses who were there have said and what they will say to the grand jury. It’s a really difficult question to answer because they don’t even know what the possible range of facts they are considering are.

WOLFF: Is there probable cause to believe that he intentionally killed this guy? From everything I’ve read, no. Was it negligent? Was he acting as a hothead or did he use excessive force? That’s a question of a lesser charge. Assuming he was assaulted in the car, the shooting there was in self-defense. But some of the evidence I’m hearing is that he was shot 30 feet away. It’s disputed whether his hands were up, his head was down and he was charging. Is there evidence here that when he actually fired those shots, was he then using that force excessively or was he in that moment in fear for his life?

Do you think jurors are aware of the controversy surrounding the case?

WARREN: You don’t extend the grand jury term and not tell them why. And everybody on that grand jury knows that this is a cause celebre case. They know it’s a special thing.

GRAND JURY NEWS: Here's how to receive the latest updates.

Download the Post-Dispatch app to receive push alerts to your mobile device.

Grand jury works in secret but its methods are no mystery

Prosecutors can take someone to trial without a grand jury indictment but often find the process useful.

"We aren't going to use violent power,” said an organizer. “We're going to use people power, to change things.”

Stores are evaluating whether to adjust or close after the grand jury announcement.

Debra Penson, of St. Louis, joins others protesting outside the Buzz Westfall Justice Center in Clayton on Wednesday, Aug. 20, 2014. Demonstrators demanded justice in the police shooting of Ferguson teenager Michael Brown on Aug. 9. A grand jury heard evidence in the case inside the courthouse. Photo by Sid Hastings