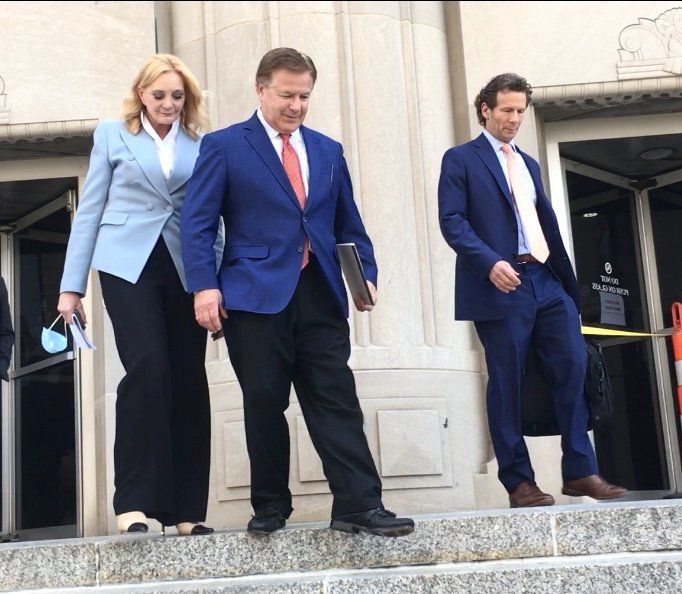 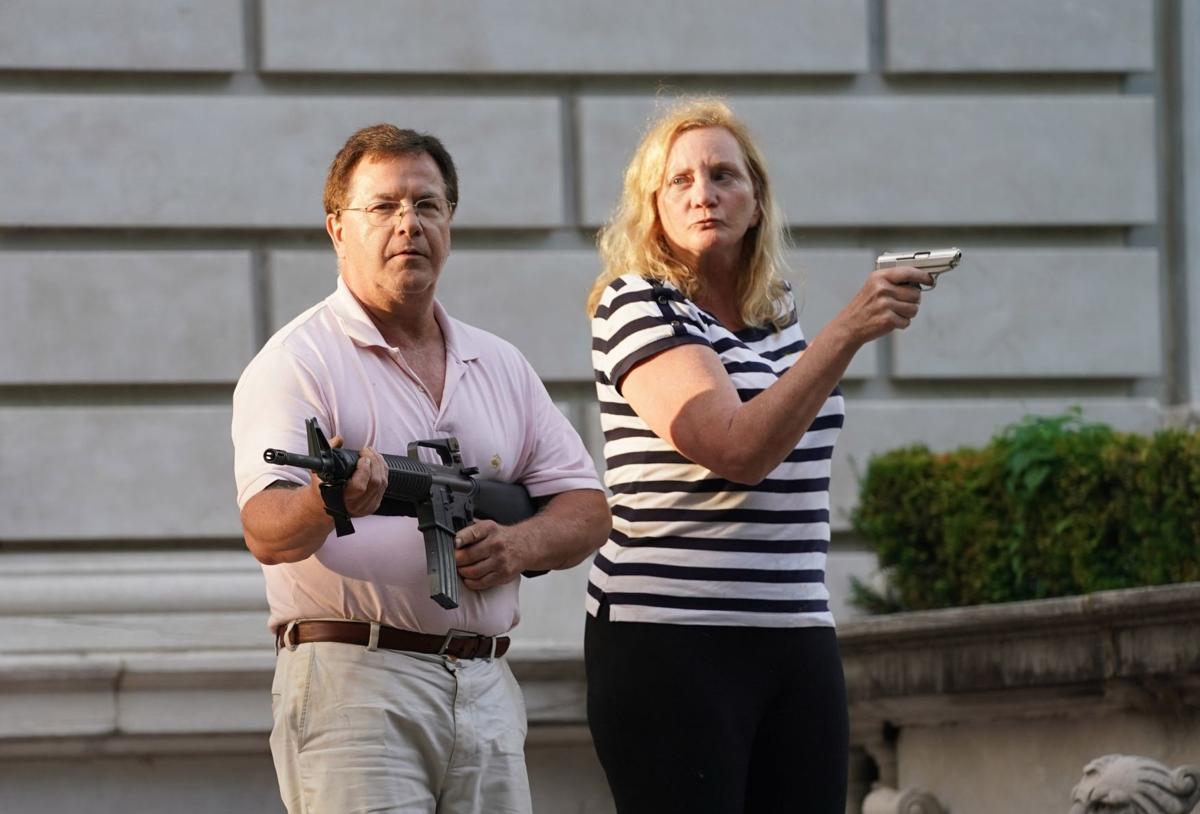 Mark and Patricia McCloskey brandish firearms in front of their home during a June 28, 2020, protest. The McCloskeys on Nov. 6 filed a lawsuit over the dissemination of this image, alleging it was taken on their property.

ST. LOUIS — Mark McCloskey, a Republican U.S. Senate candidate who along with his wife was pardoned this week after pointing guns at racial justice protesters last summer outside their Central West End mansion, sued Missouri Wednesday to get his guns back. 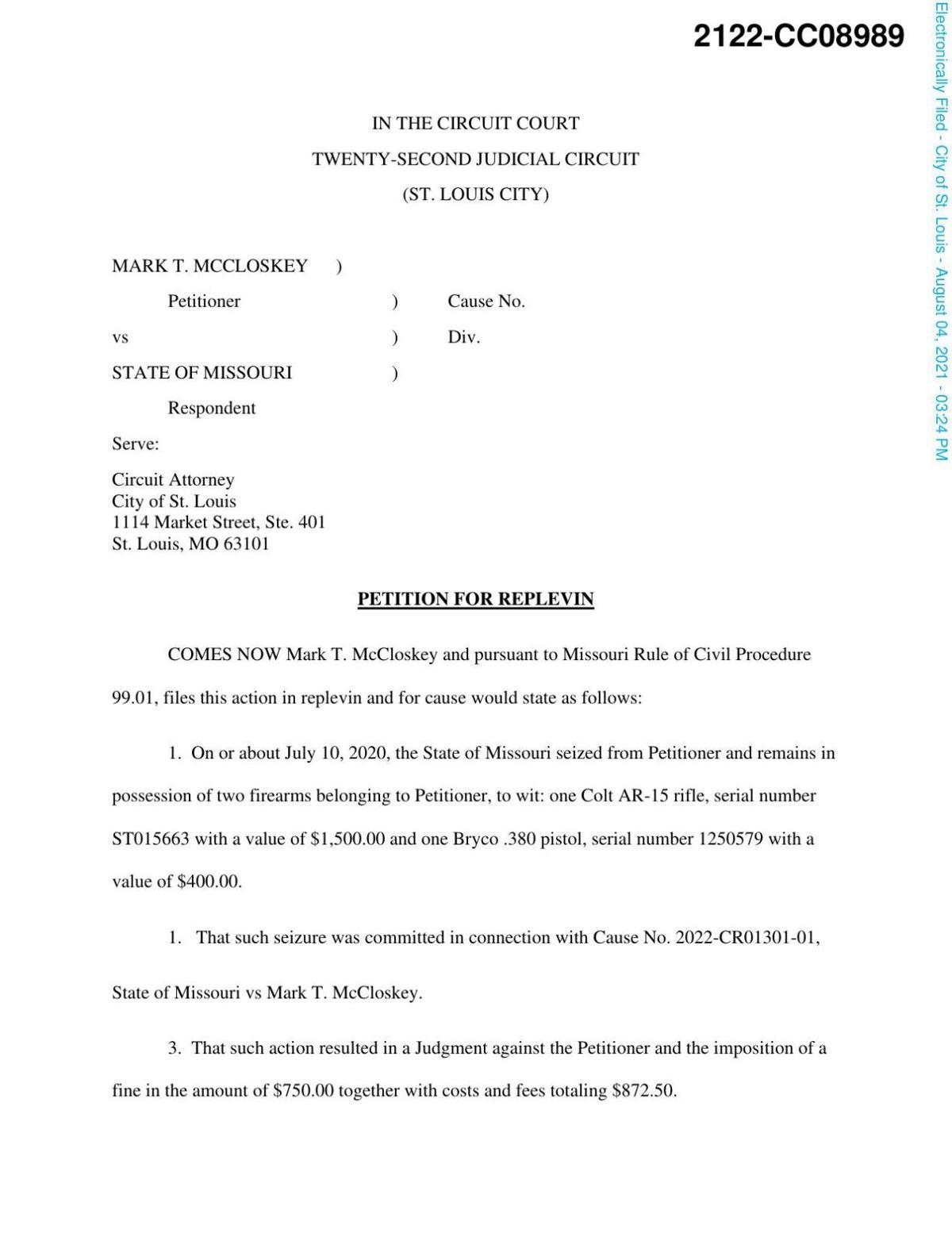 McCloskey, 64, filed a civil suit in St. Louis Circuit Court seeking the return of a Colt AR-15 rifle and Bryco .380-caliber pistol that he and his wife Patricia McCloskey, 62, agreed to surrender in June when they pleaded guilty to misdemeanor charges stemming from a confrontation outside their Portland Place mansion last year.

A spokeswoman for Gardner could not be reached.

Richard Callahan, the appointed special prosecutor and former U.S. attorney in St. Louis, said that while a governor's pardon nullifies a criminal conviction, he suspects "it does not entitle (McCloskey) to the guns, if they exist, or to the fines, any more than a person receiving a pardon who has spent time in prison gets reimbursed for the time they spent in prison."

Gov. Mike Parson's pardon of the couple this week absolved them of "all wrongdoing" and annuls "all judgments and dispositive orders" related to his case, the lawsuit says. It also seeks a refund of $872.50 in fines paid in June.

An affidavit filed with the suit claimed the rifle is worth $1,500 and that the pistol is worth $400. 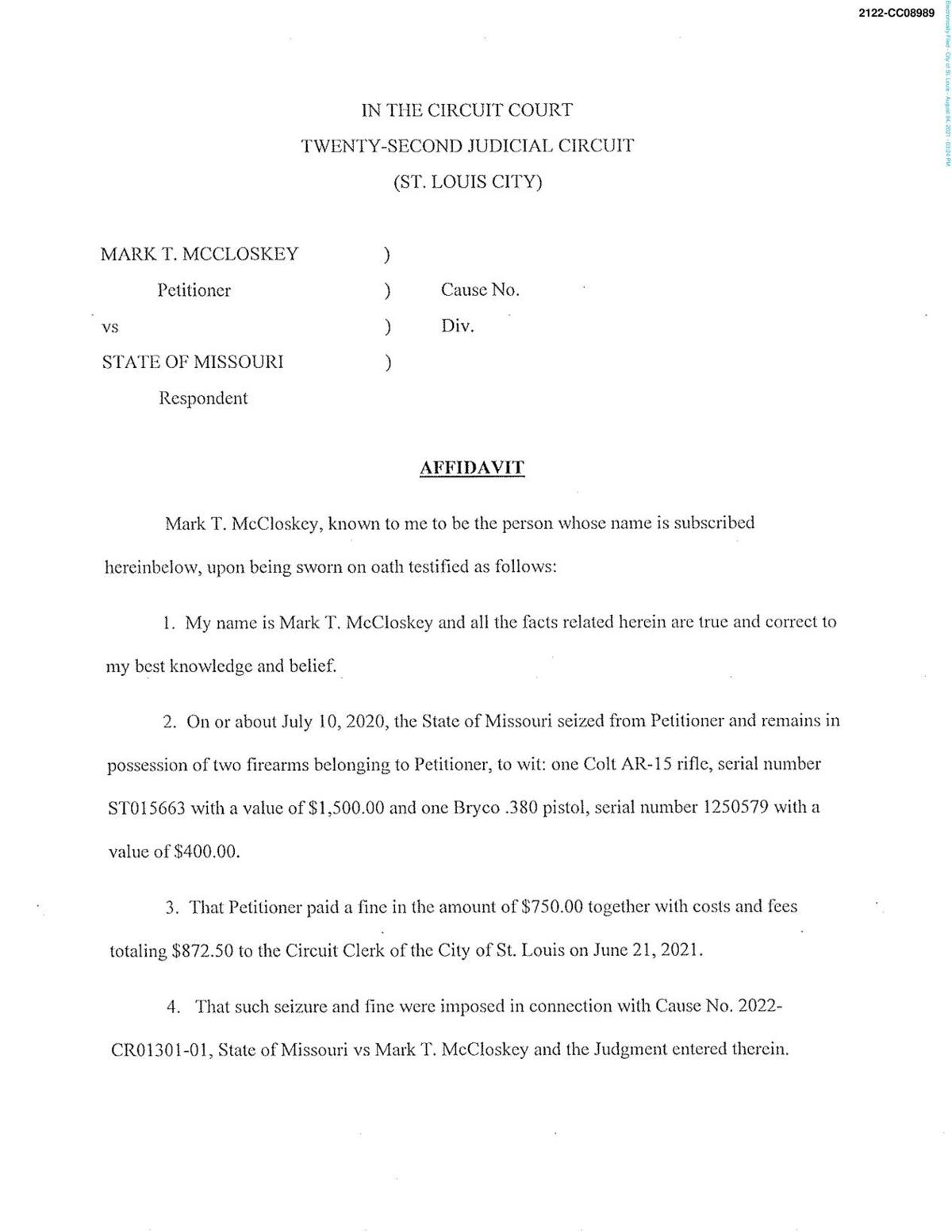 It was not immediately clear who has custody of the guns or if they still exist. The St. Louis Metropolitan Police Department had seized the weapons during its investigation. A police spokesperson referred questions to the Circuit Attorney's Office.

On June 28, Mark and Patricia McCloskey say they felt threatened by a group of protesters who entered Portland Place, a private street in the Central West End.

Patricia used a handgun, and her husband used a long-barreled gun to confront the protesters. Their actions drew condemnation, but also support from the governor and the president.

McCloskeys' law licenses could be suspended

The appointed special prosecutor said that while a governor's pardon nullifies a criminal conviction, he suspects "it does not entitle (McClos…

“They’re thrilled,” the couple’s attorney, Joel Schwartz, said Tuesday. “They want to put this episode of their lives behind them and focus on…

The special prosecutor said he will soon decide whether to do the same for her husband, Mark McCloskey.

“God came knocking at my door last summer disguised as an angry mob — and it really did wake me up,” McCloskey said.

A St. Louis judge Wednesday appointed a former U.S. attorney as special prosecutor in the case. The removal of the prosecuting attorney surviv…

The suit alleges the photo was taken on their property. The couple also sued Redbubble Inc., a San Francisco-based online marketplace for prin…

The couple plead not guilty to the charges

The couple was indicted on felony charges of unlawful use of a weapon and evidence tampering. The indictments were filed under seal Tuesday.

Watch now: Mark McCloskey says he and wife are being 'persecuted' for protecting themselves

Mark McCloskey and his attorney Joel Schwartz speak to the press outside the Carnahan Courthouse after a court appearance on Tuesday, Oct. 6, …

The nine had been issued police summonses earlier this month, but City Counselor Michael Garvin said in a statement that “prosecution is not w…

The police department confirmed it issued citations to nine people but declined to identify them, citing provisions of the state Sunshine Law …

Cori Bush responds to the McCloskeys, who called her a ‘Marxist liberal activist’ at the GOP convention

“This is their way of just trying to get attention, trying to get some notoriety,” Bush said Tuesday about the McCloskeys, the St. Louis coupl…

Gardner, a Democrat, filed a motion Friday to strike the Republican attorney general's controversial decision to ask that gun charges be dismi…

The McCloskeys are now forever associated with the latest trend in Republican politics, to find a wedge issue so outrageous that it must be em…

They each face a single felony count of unlawful use of a weapon — exhibiting. Charging documents say he pointed an AR-15 rifle at protesters …

Column: McCloskey gun-wielding case deserves to be heard in court

The McCloskeys have a legal right to own guns. But their front-porch armed defense demonstrated an appalling ignorance of basic gun safety.

Gov. says he would probably pardon the McCloskeys, if they're convicted

Parson also raised eyebrows by saying he would probably pardon the couple if they were to be convicted of crimes.

Gov. Mike Parson discusses the McCloskeys and a phone call with the president

Missouri Gov. Mike Parson says that the city's prosecutor is attempting to take the McCloskey's rights away, and that he has spoken with Presi…

Gov. Parson says the McCloskeys ‘had every right’ to wave guns and shout at protesters

Public records and interviews show Mark and Patricia McCloskey are almost always in conflict with somebody, often concerning property rights.

Police served a search warrant Friday and seized the rifle that Mark McCloskey had brandished that evening.

Watch now: A closer look at the Portland Place confrontation

A closer look at the confrontation on June 28, 2020 between Mark and Patricia McCloskey and protesters in front of their house. Video by Jerem…

Protesters returned to the neighborhood later that week

The gate to Portland Place remained locked, and protesters eventually marched south on Kingshighway toward the highway.

Portland Place, where couple pointed guns at protesters, has long been a private street

Were the couple, as they stood on their own property, within their rights to point weapons at protesters? Gun rights advocates say yes. A poli…

Mark and Patricia McCloskey brandish firearms in front of their home during a June 28, 2020, protest. The McCloskeys on Nov. 6 filed a lawsuit over the dissemination of this image, alleging it was taken on their property.