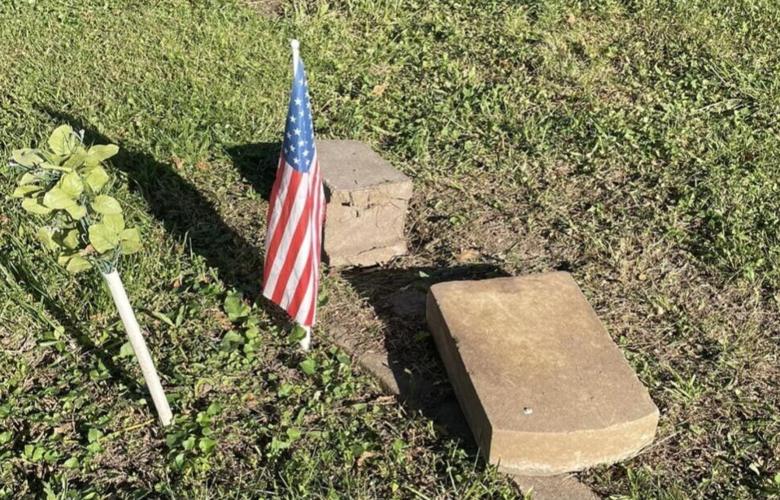 More than 35 headstones were toppled by vandals at Greenwood Cemetery, the oldest commercial cemetery for African Americans in St. Louis. 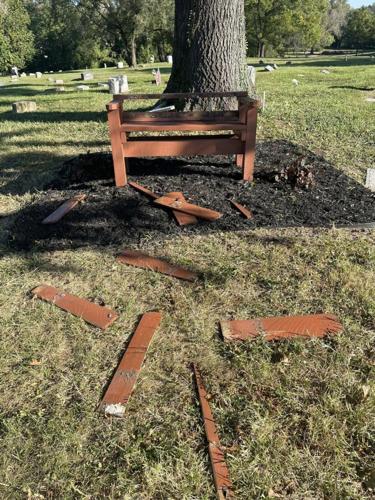 Two wooden benches at Greenwood Cemetery were smashed by vandals — and dozens of headstones toppled — on or shortly before Sept. 27, 2022.

At least 36 headstones were toppled over the past week at Greenwood, the first commercial cemetery for Black people in the St. Louis area, said Raphael Morris, who with his wife is leading an effort to clean and preserve the formerly neglected cemetery. They have not yet had a chance to canvass the nearly 32-acre lot, so more damage may have been done.

Along with the knocked-over headstones, two wooden benches were smashed and a stone bench was toppled, resulting in a large crack. A wooden pergola was also damaged by fire, and at least four other fires were set in different locations around the cemetery.

The cemetery was also a victim of the flooding that hit the area in July. Some of its road was washed out, with ruts as deep as two feet, he said. Local contractors have volunteered to fix the road.

Morris said the cemetery was completely grown over with brush 15 to 20 feet tall when he and his wife, Shelley, began to restore it in the summer of 2015. Some of the stones, though standing upright, were completely covered in dirt. Finding and uncovering them was almost like an archaeological project.

Nearly half of the land is still overgrown. Teams of volunteers do much of the clearance and restoration work, including a group from AmeriCorps National Civilian Community Corps — a government organization for people 18-26 to do national and community service — and a group of members of the Church of Jesus Christ of Latter-day Saints who work at the site twice a week.

Greenwood Cemetery is the final resting place for many former slaves and local residents of note. Among those buried there are Harriet Robinson Scott who, with her husband, was part of the infamous Dred Scott Case, and Lucy A. Delaney, who wrote the only published first-person account of a slave’s suit to become free.

Both Raphael and Shelley Morris have relatives buried in the cemetery. In 2019, Raphael Morris found the headstone for his great-grandmother, Minnie Mitchell.

A program designed to feed Missouri’s most vulnerable kids turned into a windfall for some people. State and federal officials are investigating.

St. Louis orders ‘Shoot ’em up’ Shell shut down for a year

A notorious north St. Louis gas station is set to be shut down and boarded up for a year.

Last-minute oral arguments on whether to stay Kevin Johnson’s execution were scheduled for Monday at the Missouri Supreme Court.

Counselors will be available on those days for students and staff.

Marquette High School was evacuated and dismissed early Friday morning for the second day in a row after a threat was made against the school.

A man in his 30s was shot and killed just before 9 p.m. Tuesday in downtown St. Louis.

Residents will have a chance to hear from three finalists for police chief next month before the mayor decides who will be the city's next top cop.

Two women were killed Monday in a crash in the city's Dutchtown neighborhood.

St. Louis County jail guard was supervising dozens by herself before she was attacked by an inmate. The county has opened an investigation into the assault.

More than 35 headstones were toppled by vandals at Greenwood Cemetery, the oldest commercial cemetery for African Americans in St. Louis.

Two wooden benches at Greenwood Cemetery were smashed by vandals — and dozens of headstones toppled — on or shortly before Sept. 27, 2022.