‘I’d do it all again,’ says armed lawyer who confronted St. Louis protesters
0 comments
Share this
Subscribe for $1 a month
Kim Bell

ST. LOUIS — Mark McCloskey had readied his home for violent activists. Days before protesters came to Portland Place, McCloskey had left fire extinguishers in every room on the lower level of his mansion. He had a rifle at the ready in his living room, just inside the door.

McCloskey had watched television coverage of the 7-Eleven store in downtown St. Louis that was burned to the ground by rioters on June 1 and worried about something similar happening in his gated community in the Central West End, not far from the mayor’s home.

Protests remained mostly peaceful in the month since then, especially during the daytime. No protests involved marching into people’s homes.

McCloskey and his wife, Patricia, said they had earlier been told by neighborhood homeowner trustees that the protest group Expect Us was going to have an event Friday, maybe nearby. With that warning, he set up the fire extinguishers. On Sunday, as the couple sat outside preparing to eat dinner on their porch, they could hear the chants of protesters on Kingshighway drawing closer.

“We weren’t concerned about it until it got up to the point where the Kingshighway gate was and realized there was no security, no police, nothing to keep them from coming in,” Mark McCloskey told the Post-Dispatch on Wednesday. “And then they did come in and it was a flood of people.”

McCloskey said he saw the protesters break a locked pedestrian gate and come onto the private Portland Place. Protesters have said they were peaceful and walked through an unlocked gate, without damaging it, with the idea to cut through to the mayor’s street where they later held a rally.

The McCloskeys grabbed weapons and met the crowd outside, confronting people and fearing for their lives, McCloskey said, insisting that the safety mechanism was on his AR-15 rifle and his wife’s pistol during the exchange.

They have become worldwide news, turned into memes of well-heeled, gun-toting lawyers and mocked for their affluence. They said their life has been upended and they are receiving death threats by the dozens, their phones ringing constantly.

But they said they would do it all again if the same threatening “mob” came too close.

“I believe in my heart of hearts that the only thing that kept those mobsters, that crowd, away from us is that we were standing there with guns,” he said. “If I was in the same situation, I’d do it all again.

“The bottom line was, I was there to protect my family and my house and myself.”

Several residents of Westmoreland Place and its adjoining street, Portland Place, where the McCloskeys live, signed a letter Wednesday in support of protesters and condemning threats of violence against demonstrators, “especially through the brandishing of firearms.”

Among the signing neighbors are several prominent names, including John Pieper, president of St. Louis College of Pharmacy, Will Ross, principal officer for community partnerships and associate dean of diversity at Washington University, and Mary Strauss, who directed the restoration of the Fox Theatre. Strauss’ late husband Leon also led much of the redevelopment in the Central West End.

The pedestrian gate itself has become a point of contention. While the McCloskeys maintain protesters damaged the wrought-iron gate to gain entry to the street, a live feed by one protester appears to show it undamaged as a person held it open for some of the first demonstrators to enter. Later photographs show a gate, apparently the same one, broken and folded over. Some right-wing media seized on images of the damaged gate to argue those in the crowd were the aggressors, not the McCloskeys.

Patricia McCloskey said she had car keys in her hand and hit the panic button for the car, “hoping that police or a security guard would come down and help.” The security guard for Portland Place was just down the street and didn’t budge. He “would have been scared to death,” she said.

During the ordeal on their front lawn, one protester called Mark McCloskey by name, he said. Another man kept getting closer “trying to look intimidating.” “I’m not a mind reader but he gave every impression of being there for assault purposes and to be physically threatening,” Mark McCloskey said. “It got to the point where I was concerned that I might actually have to shoot.”

Someone responds, “Calm down!” Another yells, “(Expletive) you!”

A chant builds: “Whose streets? Our streets!”

The tense exchange lasted about 15 minutes before the crowd moved on, but not before photos and videos captured the confrontation and catapulted the McCloskeys into the limelight.

Patricia McCloskey says she called 911 but police never showed up. Mark McCloskey said he doesn’t fault police for not showing up, as they are “underfunded, understaffed, overwhelmed” and for police to “maintain order in this city, it’s an overwhelming task,” he said.

Videos show Mark McCloskey immediately on his patio when protesters enter the gate.

About two hours after protesters left, police showed up to ask questions because they’d heard complaints about his actions.

The couple said they have heard from supporters but also been deluged with threats. One example: “We’re gonna burn your house, this is gonna be my bedroom, my living room and bathroom after you’re dead,” he said.

The McCloskeys met with a reporter Wednesday afternoon inside their law firm, a Victorian-style building across from the St. Louis Cathedral. They are personal injury attorneys. The day after confronting protesters, the couple boarded up their windows on the lower level of their office for fear vandals would destroy it.

During the interview, the McCloskeys sat in an office with a leopard skin rug on the floor and a red fox head mounted on the wall. Mark McCloskey made a point of saying that he wasn’t a hunter. “I don’t kill animals but whenever trophy mounts come up for sale, somebody having killed those poor bastards and put them up for auction ... I buy them and preserve them,” he said.

The couple declined to let a photographer take photos of them inside the office, in part because they didn’t want the animals in the frame to give the wrong impression.

“Besides,” Patricia McCloskey said, “those other pictures were so lovely how could we beat that?”

“The Hamburglar ... “ her husband joked.

“The Hamburglar was one of the funniest,” she added.

They were talking about a Hamburglar meme that has made the rounds on social media, along with many others, because Patricia McCloskey wore a black-and-white striped shirt on her lawn Sunday that was reminiscent of the outfit worn by the character in past McDonald’s commercials.

The McCloskeys said what is most unfair is that their actions have been portrayed as racially motivated.

“My response had nothing to do with the race of the people in the street,” he said. “What it was was an attempt to protect ourselves from what appeared to be an angry, dangerous and violent crowd that instantly appeared on a Sunday afternoon when we were trying to have dinner. And we were scared.”

If he had had time to do “a DNA kit on everybody and determine absolutely that every human being coming through that gate was 100% European ancestry, I would have done the exact same thing,” he said. “To try to form this as a race thing is absolute crap.”

McCloskey declined to answer if either weapon was loaded or if the home’s surveillance captured the event. He said he is experienced with guns but his wife is not. “I’ve been around guns my whole life,” he said. His wife, he added, “was completely terrified and had no idea how to defend herself.”

When they saw the crowd approaching why didn’t they go inside and lock the door? “Our front doors are made out of glass,” he said.

Why not hide inside the home? “Because we did not wish to lose our home,” he said. “They started a fire outside the Campbell House on the last riot.”

The couple insists they thought the crowd might break into their home.

“So you ask yourself this question,” Mark McCloskey said. “If you’ve got 300 people in front of your house, would you rather go in the house and try to fight them indoors after they’ve come in and started smashing your furniture and lighting fires? Or would you like to prevent that from happening?”

Patricia McCloskey added, “They were not just proceeding down the sidewalk. They were coming in.”

Protesters have repeatedly denied that was the case.

The McCloskeys are upset that the demonstrators haven’t been charged with trespassing or any other offense, yet the St. Louis Circuit Attorney’s Office is investigating his actions.

But the couple said they’re staying put and won’t be forced out.

“We’re not leaving the city. We’re sticking with Portland Place,” he said. “I’m not going to be intimidated. Hopefully the world will calm down.” 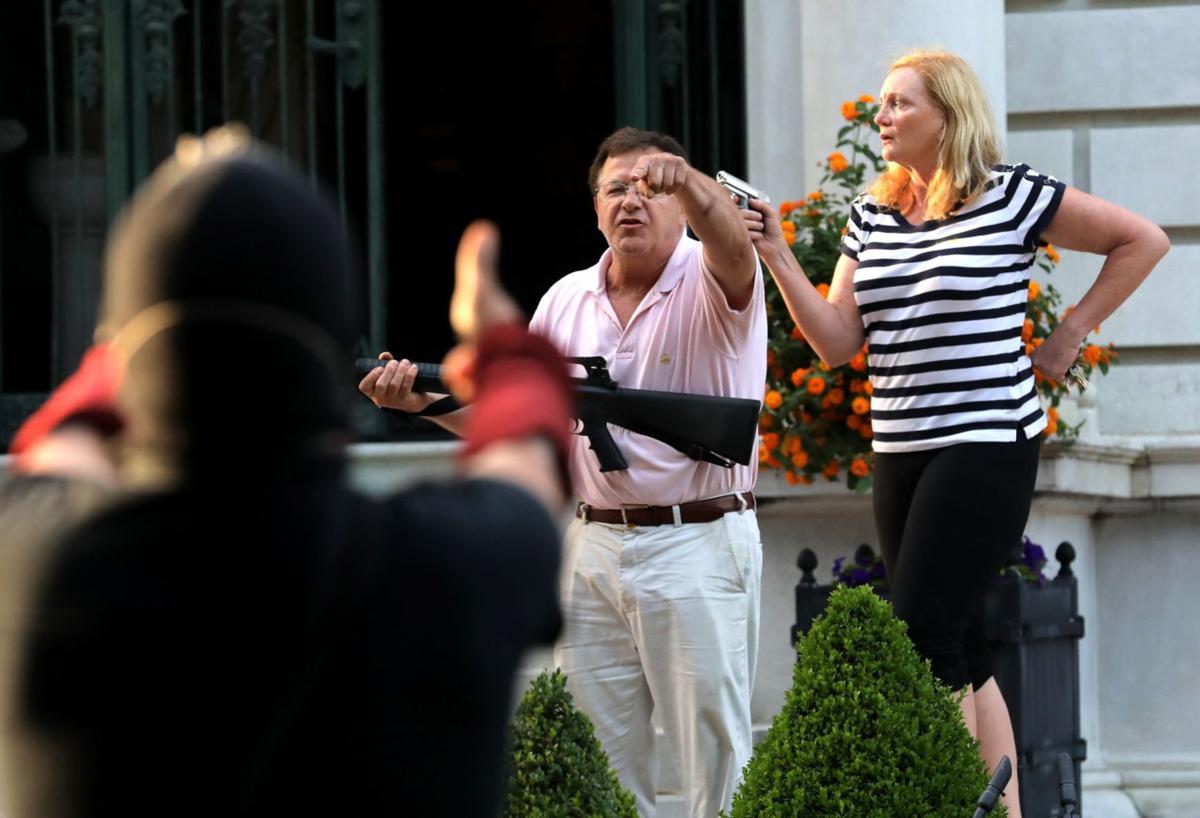 Armed homeowners Mark T. and Patricia N. McCloskey standing in front their house along Portland Place as they confront protesters marching on Sunday, June 28, 2020, in the Central West End of St. Louis. No shots were fired and the protesters moved on. The protesters called for to St. Louis Mayor Lyda Krewson's resignation for releasing the names and addresses of residents who suggested defunding the police department. Photo by Laurie Skrivan, lskrivan@post-dispatch.com 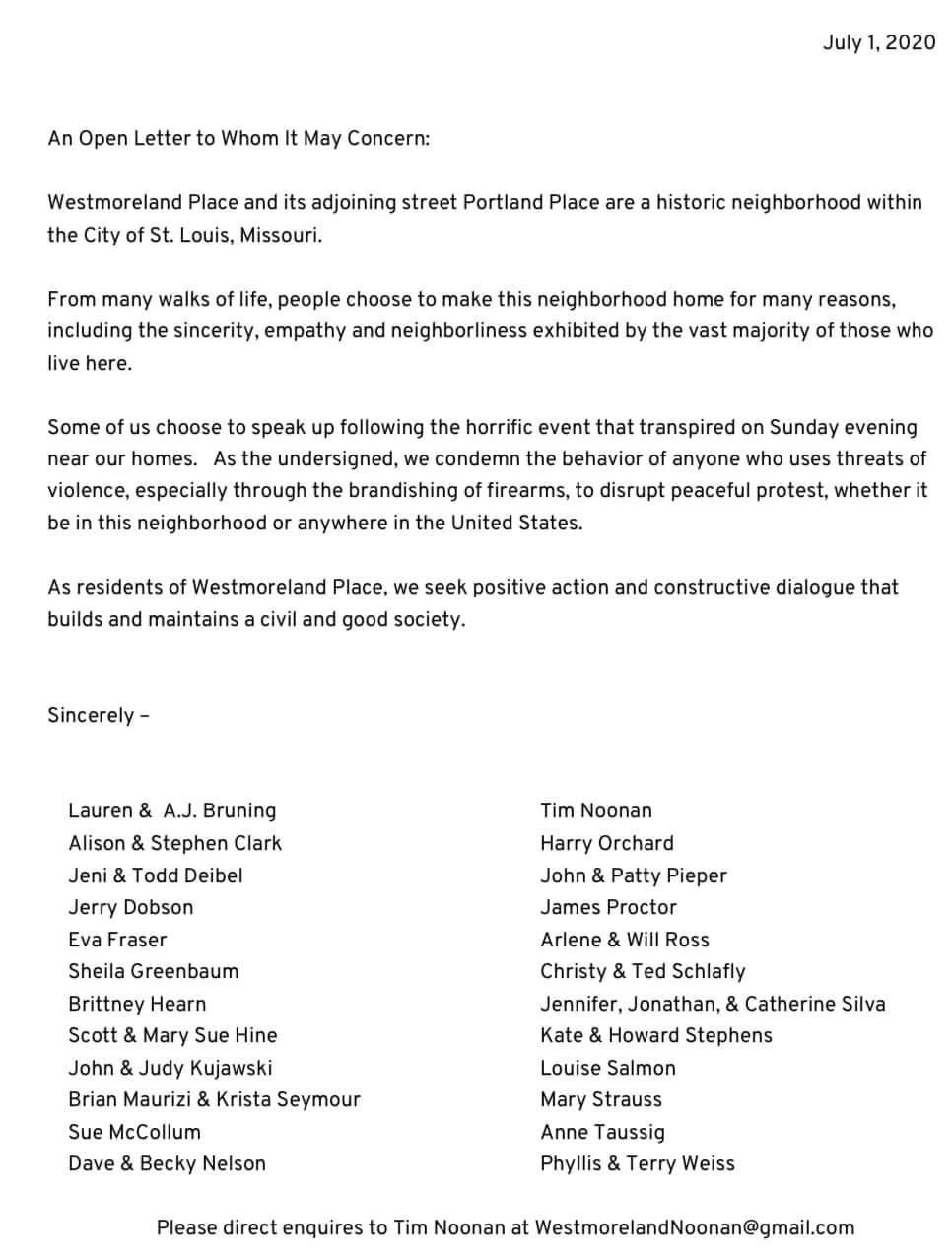 A letter signed by residents of Westmoreland Place and Portland Place condemning threats of violence against protesters.