The Illinois Court Commission ruled that Duebbert, 57, lied to police about his contact with an ex-roommate, David E. Fields, who was charged with murder in the Dec. 30, 2016, shooting death of Carl Silas, 28, in Belleville.

The state Judicial Inquiry Board, which investigates complaints involving state judges, filed a formal complaint against Duebbert in April 2018 accusing him of lying about the location of a cellphone Fields had the night of the shooting and about the last time he spoke to Fields.

The Courts Commission ruled in favor of the board after hearing testimony from Duebbert and police investigators and after reviewing records including phone logs and a video recording of detectives interviewing Duebbert hours after Silas’ death. The commission rejected Duebbert’s testimony that he had misunderstood detectives’ questions and that after the interview he told police about his contact with Fields, according to the commission’s 15-page ruling. 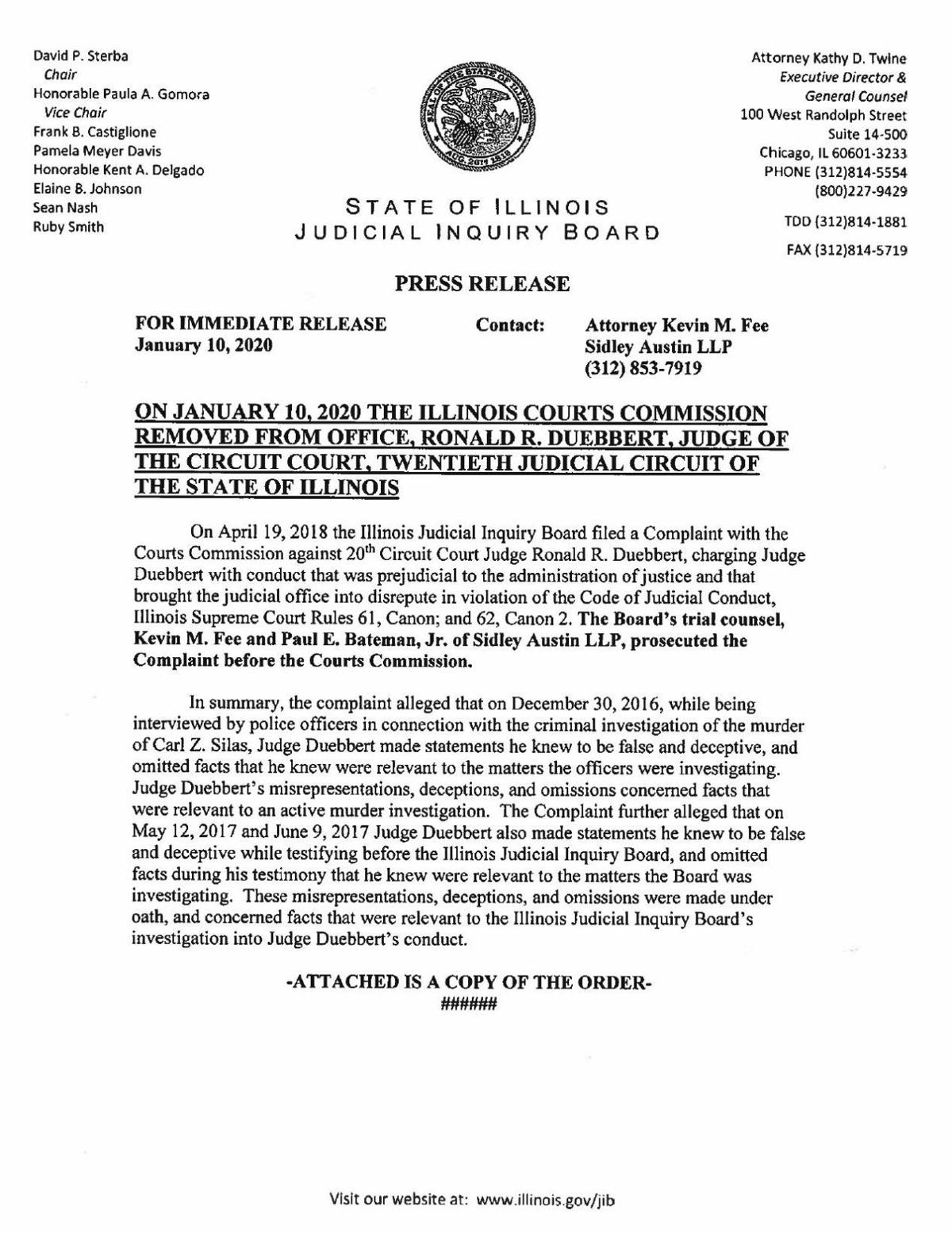 “We find the Board demonstrated by clear and convincing evidence that respondent violated these rules by his falsehoods, deception, and misconduct,” according to the ruling. “Respondent’s failure to be truthful and forthcoming with the officers was a violation of the high standard of conduct required by judges and demonstrates a failure to respect and comply with the law.”

Before the Judicial Inquiry Board filed its complaint against Duebbert, St. Clair County prosecutors had filed at least four of their own complaints against him. Detectives also sought an obstruction of justice charge against Duebbert, accusing him of lying to them. A special prosecutor was appointed in the case, but no charges were ever filed.

Duebbert, a Republican, beat former Chief Judge John Baricevic, a Democrat, in the November 2016 election. After the Judicial Inquiry Board filed its complaint against Duebbert, he was restricted to administrative duties in the courthouse.

Messages left with Duebbert and his attorney Friday seeking comment on the commission’s ruling were not returned.

Duebbert last year sued St. Clair County police and prosecutors, claiming they fabricated evidence against him in an unrelated sexual abuse case because they were unhappy he unseated Baricevic.

Duebbert’s suit, filed in U.S. District Court in East St. Louis, accused a former client of presenting a false affidavit to Belleville police alleging Duebbert grabbed the client’s genitals through his underwear. The sexual abuse case was dismissed July 6, 2018, before officials would have had to produce electronic communications between prosecutors and a victim’s advocate, the suit said.